Holidays create edible memories and sensory cues. But values matter, too. So what happens when kids want turkey? 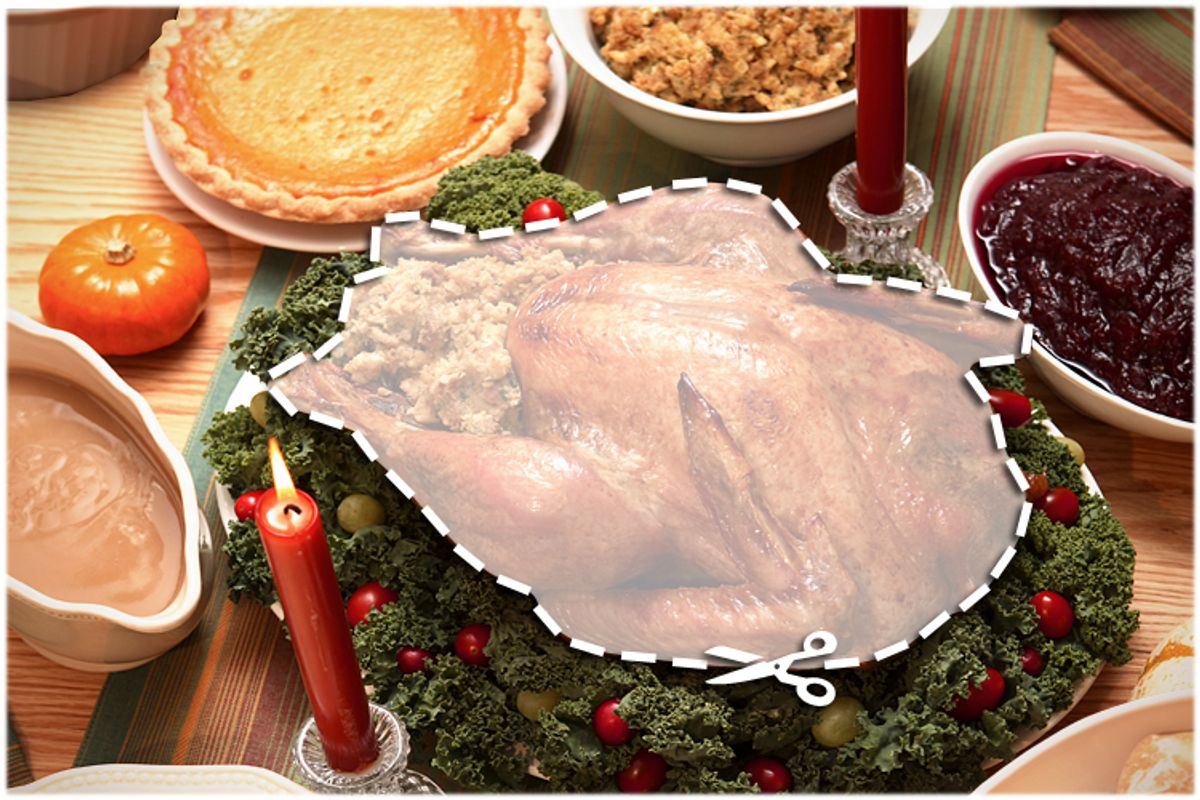 The lights are dimmed and candles throw flashes of light across the table, carefully set with my in-laws' vintage floral china. One room over the woodstove blazes to keep the old farmhouse warm against the Vermont cold. I’ve folded and set eight hand-drawn placecards, one in front of each plate, an individual note of gratitude inside. My husband’s mother passed away a few years ago and I want to get this right. I want the food to be good and I want to bring everyone together in a meaningful way.

We say our secular blessing, two toddlers goofing up the unison in a pleasing way: Bless the food before us, the dogs beneath us. And there are five beneath us, with two cats marauding around the dining room for good measure. One of them has no teeth and opens his mouth in the way you’ve seen tigers do, the Flehmen response, a sort of mouth-breathing that allows cats to taste the air. The beagle-mix passes gas and the corgi steals the 3-year-old’s napkin.

This is not Donna Reed’s dining room table. For one, it’s an Irish Laying Out Table passed down to us through my husband’s mother’s family. In other words: Where our stuffing sits, a dead body used to lie for viewing, a perfumed corpse surrounded by flowers, orifices plugged, arms straightened. But that’s not the only unusual thing about our Thanksgiving table. On Turkey Day, there is no turkey.

And I feel guilty about it. I sense my husband and father-in-law scanning the table, wondering which dish I’ve smuggled gray, lifeless faux meat into. Sure, they accept the onslaught of lentils and tempeh on weekdays, but Thanksgiving is Thanksgiving. There are expectations. Traditions to honor.

Jonathan Safran Foer, in his book "Eating Animals," talks about our arbitrary distinctions between pet and food, but also the concept of narrative and family food, of food as tradition. He recalls his thrifty, Holocaust-surviving grandmother’s singular dish of chicken and carrots, the way he and his brothers thought she was the “Greatest Chef Who Ever Lived.”  “Her food was delicious because we believed it was delicious,” he writes. “We believed in our grandmother’s cooking more fervently than we believed in God.” What did it mean to opt out of eating that dish?

Every family and culture has these staples, dishes that are more than food. They are edible memories, sensory cues, a way of saying you’re home now. As an up-and-coming matriarch, I want to make these memories for my family; it brings me joy. Safran Foer writes of his grandmother:  “The sustenance she got from the food she made didn’t require her to eat it.” I get that. Sometimes when you craft a meal, you craft an experience, a touchstone in family narrative. It’s not just sustenance; it’s ritual.

I rule the kitchen because I’m the cook in the family, not because I’m a woman. But it’s a soft rule, nearly democratic, and the rumblings of dissent are always palpable in the weeks leading up to a holiday. As October ends, I sense my omnivorous subjects plotting.

“Maybe we can do a joint Thanksgiving!” one says.

Surely there is winking and nodding behind my back, maybe secret emails about which family friend can ease a steaming-hot, brown-skinned turkey onto the table with grace. My family is a supportive, liberal family, but the heart, or gut, wants what it wants: tryptophan.

We usually smile over my dishes of green beans with cashews, ginger and feta. My sweet potato casserole and fresh sourdough bread with maple butter. The stuffing with figs and rosemary. But the truth is that judgment is in the air; there are two vegetarians and six meat eaters seated at the table. Two of those meat eaters are kids, who are by default vegetarians until seduced by tubular meat at birthday parties and friends’ houses.

I’ve never wanted to put the pressure of choosing a side on my kids. They like meat; they ask for it. They understand I don’t eat it, and bring me plastic tomato sandwiches when we play. One day my 3-year-old sees a flock of wild turkeys on the side of the road and says: Yum.

I wince, but I’m not going to shame my daughters over their choices, or my friends, for that matter. Though I have an activist’s heart, when it comes to explaining my food philosophy to friends, I’m conflict-averse. Because what we’re heading toward is a comparison of values, and what’s fun about that?

However, in the past I’ve been too eager to accommodate others. A few years ago a writer I really respected was coming to my house for a meal, and I wanted to make his favorite dish: roast chicken. I was excited until I opened the plastic wrap and held the body; eight pounds, exactly the weight of my newborn.  The carcass had a weird give to it, muscles and bones adjusting to my grip. And then there was the pimpled skin and that creepy mesh bag of innards.  This was a body. The chicken smelled amazing in the oven and looked gorgeous on the table, but I was exhausted by the experience, and had no intention of eating something I’d spent hours on. That said, I didn’t want my meat-eating friend to sit at the table and feel as though something was missing.

But how many times have I sat at a wedding dipping a recently thawed dinner roll into ketchup?  Sat at a tailgate looking for something I could swipe a fragrant glob of barbecue sauce with? Baffled a drive-through employee with a “cheeseburger no burger” order? Or had to turn away a well-intentioned waiter with a plate of fish?

The inevitable look: Right, lady. You go home to your 500 cats.

Last week at a conference, I discreetly mentioned my vegetarian status to the waitress, and she (kindly?) brought me a plate of dry noodles and limp, unseasoned eggplant as an entree. I drank coffee and discreetly ate a granola bar from my bag.

I found vegetarianism when I found my first gristle. I was 12 and sitting at a Hardee’s in eastern North Carolina. I bit into a chicken nugget; I still remember the feel of ropy cartilage pushing up against my bucked teeth. Never forget.

There were lapses, but not many. I ate fish every now and then, took bites of cheeseburgers when I’d had too much to drink, and relished an “accidental” chunk of bacon in a salad. I still love bacon. I miss it. But pigs are as cognitively sophisticated as my dogs, and mother pigs sing to their young when they nurse. They suffer in industrial situations, a social animal spending most of its life crated, lying on a floor covered in feces, tails and ears cut without pain relief, bred and bred until slaughter. I don’t want to add consumer demand; I don’t want to add to the amount of suffering in the world.

But there are the people we hope to be and the people we really are, and if there is a clear line to walk through our relationship with animals, I haven’t found it. I own leather boots. We keep hens for fresh eggs. My girls drink milk, and if you buy dairy products you’re often supporting the veal industry, the crating of male calves. I’d be lying if I said I was doing “the best I can do.” I’m not. Every week I work toward a more vegan existence, because I know it’s the single most effective action a person can take in reducing global warming. (Over 50 percent of global greenhouse emissions are caused by animal agriculture.)

However, I’ve come to believe that sorting through holiday table politics requires an acknowledgement of my own imperfection. Soy, the vegetarian standby, is a product rife with controversy, often genetically modified (Monsanto Roundup Ready soy! Quelle horreur!) and farmed in an unsustainable manner. Though I garden, put up food and do a local CSA year round, the last time I checked bananas and avocados don’t grow in Vermont. Supplementing a foodie vegetarian diet often means navigating the temptation of products sourced from unsavory or faraway places.

Making peace at the dinner table requires compromise, and reading E.O.Wilson’s "The Social Conquest of Earth" last year, I was reminded that our very ability to navigate complex social issues stems from eating meat.  The venerable Harvard-based scholar Wilson, whose 27th book charts the course of humans and their advanced social lives, writes, “The advantages of cooperation in the harvesting of meat led to the formation of highly organized groups … In later evolution, the mastication and physiology of digestion evolved for specialization on cooked meat and vegetables.  Cooking became a universal human trait.  With the sharing of cooked meals came a universal means of social bonding.” This echoes Jonathan Safran Foer’s idea of the sacred table, this symbolic space where something bigger than eating happens.

Wilson also cautions that we’ve “created a Star Wars civilization with Stone Age emotions” and are “a danger to ourselves and the rest of life.” He suggests that humans do best when practicing “impulse control” in social settings.  However, when it comes to eating the food we want, so few of us are willing to sacrifice.

Might we do better by the biosphere and give vegetarians and vegans a chance to shine in the kitchen this holiday season? We’re often inventive, resourceful, and obsessed with food. Make new memories with tempeh!  Hold hands around the cherry-zinfandel glazed seitan! Get groovy with kale. And if you can’t do that, then embrace the spirit of compromise, this sophisticated eusocial feat that our sapience allows for. For example, I told my family that if they want a turkey — and they do — they have to procure one from a non-industrial source and roast it themselves. We have amazing local producers of meat and dairy in Vermont, many of whom are friends.

I don’t have to sacrifice my values or panic about bags of innards, and my loved ones don’t miss out on beloved traditions. Ultimately, it’s a luxury to worry about what you’re eating and where it comes from. Bless the food before us, the friends beside us.

I know how this year’s meal will end anyway. We’ll get up, full and lazy, from the table, and as we’re distracted by conversation or cleaning, our stone-deaf King Charles rescue will silently leap from floor to chair, and chair to table, and run laps around the centerpiece, licking the plates until they’re all clean. Something dogs model well: The art of eating without overthinking, the sheer animalistic pleasure of indiscriminately stuffing your face.