What to get Rush Limbaugh for Christmas 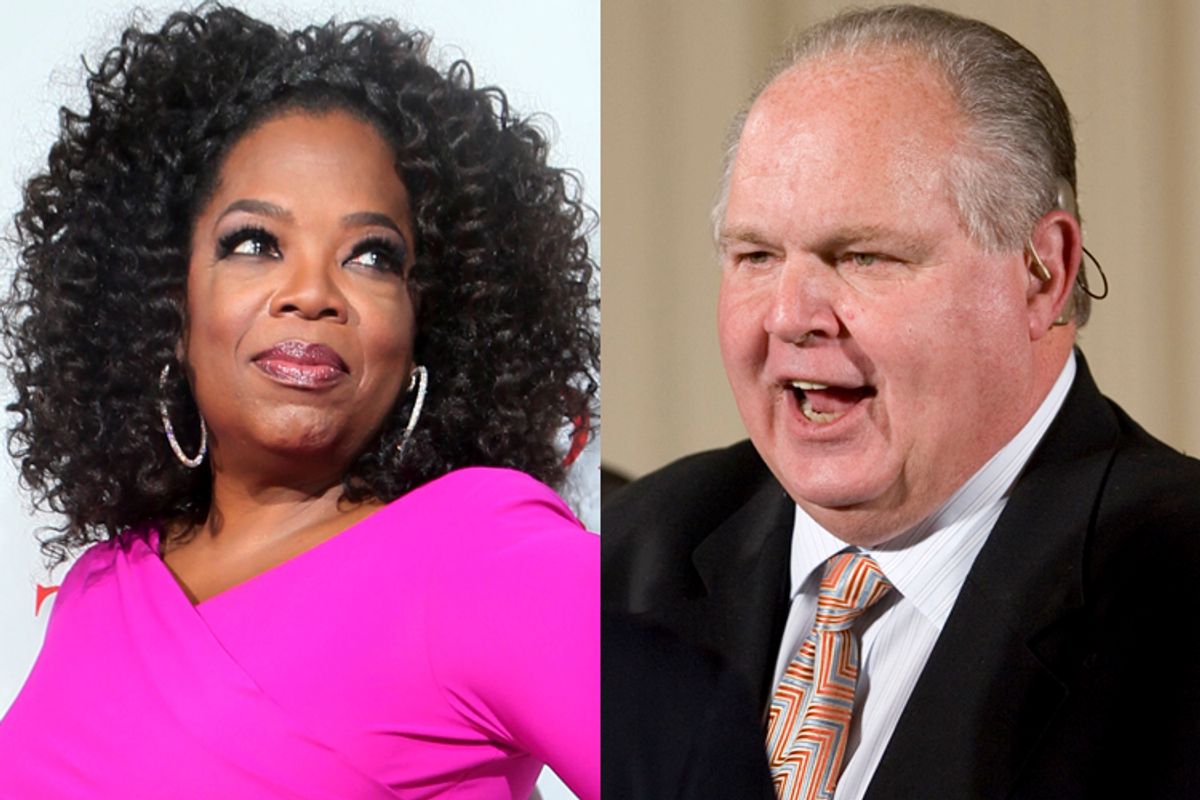 Oh, hey, Jonah Goldberg and Elisabeth Hasselbeck and Rush Limbaugh, and all you right-wingers trying to whitesplain racism to Oprah Winfrey: The finale of “The African Americans: Many Rivers to Cross” is on PBS tonight and I’m sure you won’t want to miss it.

You guys know the guy behind it, Henry Louis Gates Jr. Well, OK, you probably only know one thing about him: that he was the Harvard professor arrested by a Cambridge cop in 2009 after having trouble getting into his own house -- arrested even after he’d proven he lived there. It took a beer summit with President Obama and Vice President Biden to make things sort of OK.

I wrote at the time about how Obama’s wading into the Gates controversy – he simply told the truth, that the police had acted “stupidly” in detaining and booking the Harvard professor in his own home –  had “blackened” him for many white people. It coincided with a sudden plunge in the president’s approval rating among white voters, from the 60s down to the 40s, and he never really recovered.

Yet Gates was a terrible choice to play Angry Black Man, because he’s always been someone who’s treated white people as though they deserve the benefit of the doubt. Melissa Harris-Perry argued in the Nation at the time, “Gates is invested in black life, black history, black art, and black literature, but he has managed to achieve a largely post-political and even substantially post-racial existence.” Which is what made his arrest so shocking.

“Many Rivers to Cross” seems the ideal way for whites, even conservatives, to cross over to understand the enduring legacy of slavery (even you, Sarah Palin) and Jim Crow and the persistence of racism in the age of Obama. Gates doesn’t interview Oprah, but in the finale he does talk to the most illustrious black Republican of our time, former Secretary of State Colin Powell, who gets teary talking about Obama’s victory. “I cried,” Powell confesses to Gates, and Gates gets choked up too.

Oh, I forgot: Colin Powell used to prove the Republican Party wasn’t racist; then he endorsed Barack Obama, and now you guys hate Colin Powell, and think he's a racist.

Still, Gates does a lot of sly things to make everyone comfortable crossing these rivers with him. He’s kind of literally company, as we see him walk on a cane down roads and riverbeds where unspeakable racial tragedies took place. You’d be safe with him, Jonah Goldberg, strolling down a path that led to the savage quelling of a slave rebellion or a bridge where a Detroit race riot erupted.  He admits his own fears. Gates walks Ruby Bridges back to the elementary school she integrated. “Ruby, were you scared?” he asks. “I would have been terrified.”

Yet he also shows how African-American achievement has always coexisted with African-American oppression, which would be a bracing corrective to the ignorance of insisting the ascendance of Barack Obama and Oprah Winfrey mean racism is behind us. Oprah even has an American capitalist antecedent in Sarah Breedlove/Madame C.J. Walker, who was the first African-American millionaire, male or female (though Walker got rich marketing to black women where Oprah ministers to all of us).

Gates introduces us to black strivers and titans and culture heroes, from Walker to Don Cornelius to Vernon Jordan to Questlove; black meccas from St. Augustine, Fla., to Tulsa, Okla., to Detroit, all while telling the story of how far we still have to travel to equality. He shows how white Americans have always been able to love (and appropriate) black culture without giving up their racism. I’m not saying nothing has changed, nor is Gates, but the notion that Oprah’s own popularity disproves her charge of racism is itself disproven by American history.

I probably know more than the average white person about African-American history, which only ensures that I know less than I think I do. And I learned so much from “Many Rivers,” I am sorry to see it end. One thing I haven’t seen anyone say about it: There’s a gender balance that’s rare in history documentaries that aren’t about women’s history. I watched Episode 4 online back to back with “Lincoln at Gettysburg,” which I loved, but which only featured one female scholar, the great Melissa Harris-Perry.

Gates features dozens, from Annette Gordon-Reed and Thavolia Glymph to Michelle Alexander and Isabel Wilkerson. And he focused on the transformative stories and ideas of black women, from Walker to Rosa Parks, Ella Baker, Diane Nash, Charlayne Hunter-Gault, Grace Lee Boggs (including my friend and mentor Angela Glover Blackwell of PolicyLink, where I’m on the board -- but I was writing this piece already before I learned that).

I know Goldberg and Limbaugh and Hasselbeck and the other racism deniers aren’t likely to watch “Many Rivers.” And I know it’s simplistic to think a documentary, however artful, can change the minds of partisans who make a good living denying our history, but I can dream. I’d still try to sneak the whole series into the Christmas stocking of your racism-denying but “cultured” relatives this holiday season.