After botching a pivotal "60 Minutes" report on Benghazi, CBS makes some changes -- but questions remain 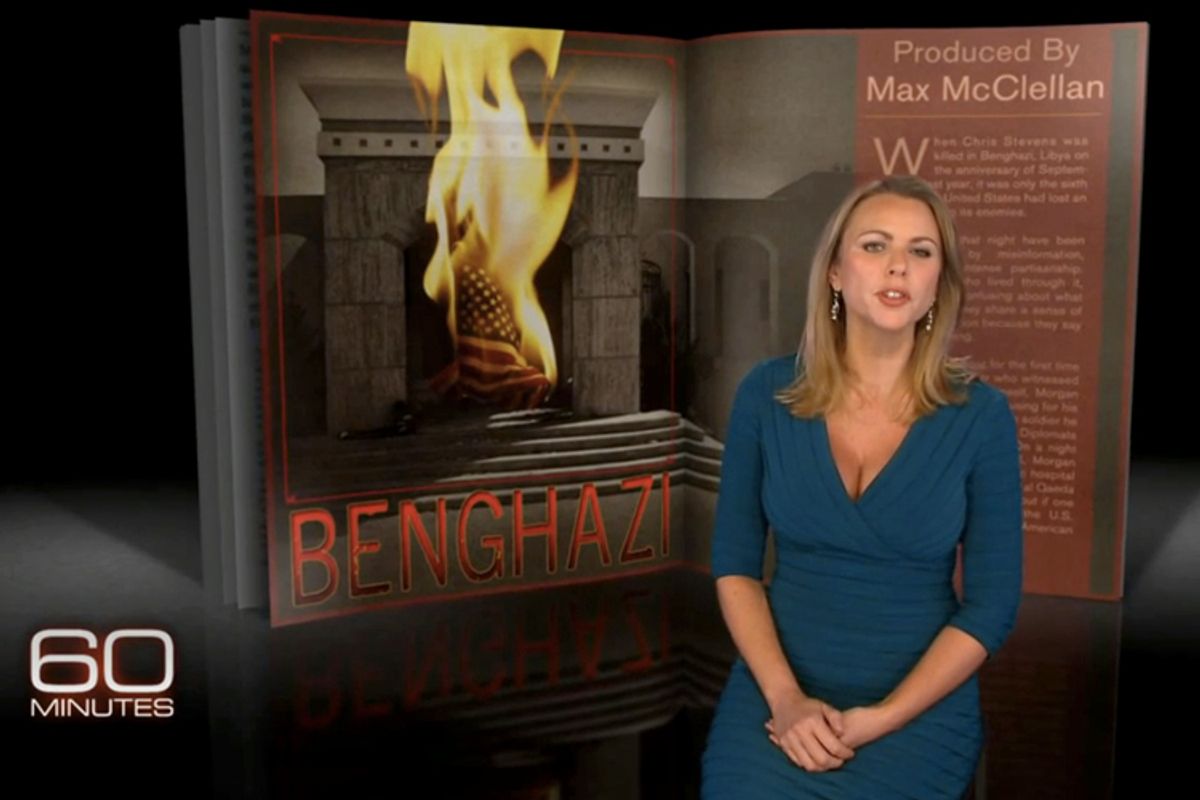 In the wake of "60 Minutes'" bogus Benghazi report, starring an eyewitness who, as it turns out, appears to have completely lied about being there during the 2012 attack on the U.S. compound that resulted in the deaths of Ambassador Christopher Stevens and three other U.S. personnel, right-wing reporter Lara Logan and her producer will be taking a "leave of absence" of unspecified length.

Via Michael Calderone at HuffPo ...

NEW YORK -- Jeff Fager, chairman of CBS News and executive producer of "60 Minutes," informed staff Tuesday that Lara Logan and her producer, Max McClellan, would be taking a leave of absence following an internal report on the news magazine's discredited Oct. 27 Benghazi report."As Executive Producer, I am responsible for what gets on the air," Fager wrote in a memo obtained by The Huffington Post. "I pride myself in catching almost everything, but this deception got through and it shouldn't have."

See Calderone for the text of the memo from Fager, which includes the summary of the internal report by Fager's underling Al Ortiz, executive director of standards and practices at CBS News. Fager is both CBS News chairman and the executive producer of "60 Minutes." Apparently, he has not required himself to take a leave of absence, even though, as executive producer, he is ultimately responsible for what goes on the air.

In the memo, Fager describes what happened as "a regrettable mistake"...

Among the errors in production of the report, according to the summary of Ortiz' report, was that the account of Logan's faux swashbuckling "witness" Dylan Davies --- a security contractor who claimed to have scaled a 12-foot wall at the compound before taking out one of the attackers with the butt of his rifle during the onslaught -- could have easily been discovered by CBS News as fraudulent before the report ever went to air.

"The fact that the FBI and the State Department had information that differed from the account Davies gave to 60 Minutes was knowable before the piece aired," Ortiz writes. "But the wider reporting resources of CBS News were not employed in an effort to confirm his account."

As progressive blogger Heather Parton, better known as "Digby," revealed earlier this month (before discussing it with us on The BradCast) Logan harbors hard-right "war hawk" proclivities, and had called publicly for the U.S. to "exact revenge" for the Benghazi attack just one month after it was carried out. That point was also noted by Ortiz in the summary of his internal report as another one of several errors made by CBS and "60 Minutes" in their production of their now discredited story ...

--In October of 2012, one month before starting work on the Benghazi story, Logan made a speech in which she took a strong public position arguing that the US Government was misrepresenting the threat from Al Qaeda, and urging actions that the US should take in response to the Benghazi attack. From a CBS News Standards perspective, there is a conflict in taking a public position on the government's handling of Benghazi and Al Qaeda, while continuing to report on the story.

Before it all fell apart, Logan and CBS News had stood by the story for almost two weeks, claiming that they had spent more than a year working on the story, and had interviewed some 100 sources to ensure its accuracy. Almost none of the known problems with the Oct. 27, 2013, report were fully acknowledged by Logan during her tepid 97-second on-air "apology" at the very end of the Nov. 10, 2013, "60 Minutes" broadcast.

Logan and McClellan's temporary dismissal at CBS is in contrast to the permanent removal of four veteran producers and correspondent Dan Rather, who was also the anchor of CBS Evening News at the time, after a 2004 "60 Minutes II" report on George W. Bush's absence from service in the Texas Air National Guard caused an uproar among the right-wing blogosphere. Though the authenticity of one of the documents used in that report has never been verified, the substance of the report was not disputed by the Bush administration and has since been confirmed to be true.

Meanwhile, Fox "News" --- which relied, in a number of stories, on the very same fraudulent source used by "60 Minutes" --- has failed to apologize, correct or retract any of their own bogus reports from that source. Fox has been a hub for fraudulent reporting on the Benghazi incident for more than a year. Should Logan not return to CBS, we suspect there will be a job offer waiting for her at Fox "News," where her politics will be warmly welcomed along with many other discredited "journalists" now proudly featured on the "news" network.