The year's most overrated anniversary: Quit celebrating "I Want to Hold Your Hand"

"I Want to Hold Your Hand" is a good song, but other 1963 singles are just as important -- and ignored 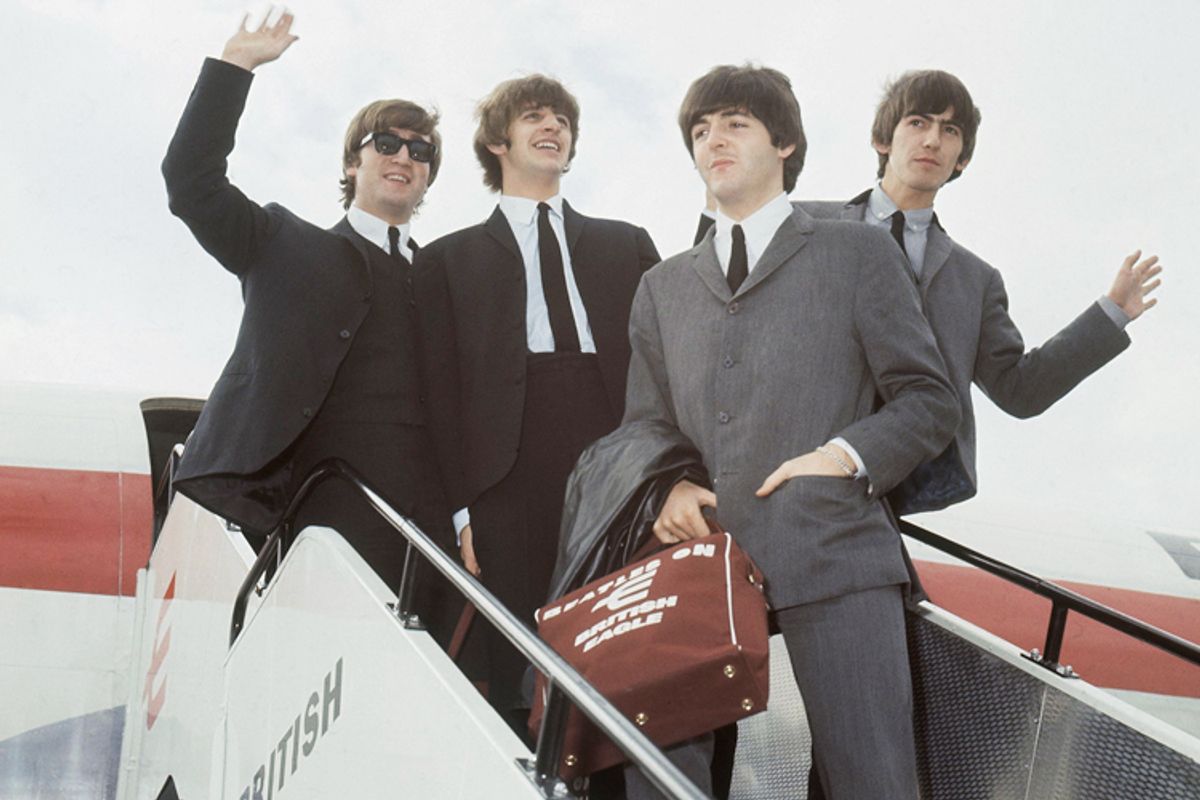 Another year, another reason to commemorate once again the most commemorated band in rock history.

Fifty years ago this month, the Beatles released “I Want to Hold Your Hand” as a single. It wasn’t their first single nor even their first million-selling hit. In fact, the only reason “I Want to Hold Your Hand” didn’t debut at No. 1 in the U.K. was because “She Loves You” had already set up camp at the top of the charts. Instead, the song’s true distinction was that it broke the Beatles in America. It was their first smash left of Britain, the song that elicited cries from teenage girls who made George, John, Paul and Ringo into sex symbols as well as pop stars. Setting them up as the world’s first boy band, it likewise gave them a foothold in the American market, from which they took over the world.

Already there have been numerous essays, e-books, posts and reminiscences commemorating the anniversary, and there are many more on the way. Next year marks the 50th anniversary of the Beatles' appearance on the “Ed Sullivan Show,” so get ready for another round of deification in a few months. Amid such fawning coverage, it’s difficult to reappraise the music, which already comes pre-stamped as “good” and “important.” As Beatles singles go, “I Want to Hold Your Hand” is in fact one of their best. Writing “eyeball to eyeball,” as McCartney famously described it, he and Lennon hint at the melodic and structural sophistication of their later collaborations, blending the spry concision of Brill Building pop with the energy of R&B. (Critic Chris Willman has a good rundown on the song’s road to release and renown over at Yahoo.) The song is defined by its joyful urgency, driven by George’s sharp guitar work, those chipper handclaps, and especially Ringo’s insistent drumbeat. (His enthusiasm always outstripped his proficiency, and he was a better drummer for it.) “I Want to Hold Your Hand” is rambunctious and fidgety — a pretty apt portrait of the band’s largely teenage audience.

If the song’s sexual metaphor sounds supremely harmless today, “I Want to Hold Your Hand” nevertheless evokes the visceral charge of teenagers pressing flesh. Back when PDAs were verboten, hand-holding could be subversive, especially as it hinted at more intense pleasures. From the song’s first lines, the Beatles address their audience directly: “Oh yeah, I’ll tell you something, I think you’ll understand.” On its surface, it sounds innocuous, but put some quote marks around “something,” wink when you sing it, and it sounds a lot more lascivious. It’s a code that only runaway hormones can crack.

It was a good single, obviously, but why does it merit a 50th anniversary commemoration while other songs from 1963 sit uncelebrated on oldies playlists or nostalgia compilations? It was, in fact, an amazing year for pop music, especially for female artists plumbing the contradictions and complexities of adolescent sexual politics. The Crystals had huge hits with “Da Doo Ron Ron,” the rapturous “And Then He Kissed Me” and the frighteningly frank “He Hit Me (It Felt Like a Kiss).” With its familiar drum intro (BOOM! BOOM-BOOM!), chattery castanets and cinematic strings, the Ronettes’ “Be My Baby” remains a towering monument to love and devotion and truly one of the best pop songs of that or any other decade. Sure, “Be My Baby” and so many other girl-group hits are tarnished by their association with superproducer/megalomaniac/murderer Phil Spector, but Ronnie Spector conveys so much poise and dignity that she owns the song utterly and completely. By contrast, “I Want to Hold Your Hand” sounds like the work of cavemen defining pop music as a vehicle for white male desire.

Also in 1963, the Beach Boys released their third album, “Surfer Girl,” which includes the hit single “In My Room.” While they had made a name as a surf pop band singing about surfboards, hot rods and girls in bikinis, “In My Room” underscored the immense melancholy that informed their music and revealed singer/writer/producer/mastermind Brian Wilson as a deeply isolated and lonely individual. The song simultaneously punctured and reinforced the band’s beach mythos, hinting at more “teenage symphonies to God” to come. In April 1963, Johnny Cash — a lifer like the Beach Boys and the Beatles — released what many proclaim to be not only his best tune but the greatest country song ever recorded. Inspired by his love for June Carter, “Ring of Fire” may be the very foundation for the Man in Black mythology that has persisted well into the 21st century, the consecration of Cash as a sinner redeemed by a good woman.

Why aren’t these and other worthy songs (the Kingsmen’s “Louie Louie,” Skeeter Davis’ “The End of the World,” Rufus Thomas’ dada dance hit “Walking the Dog”) given the same attention and affection already afforded the Beatles each year? It can’t be pure nostalgia, as each generation routinely discovers the band at some point in its adolescence. In 2013, the Beatles exist almost solely to be commemorated. Every year there is a new book (most recently, Mark Lewisohn’s “Tune In: The Beatles: All These Years”), a new reissue (“On Air: Live at the BBC Vol. 2”) or a new anniversary to remind us just how important the Beatles are: how they changed the face of pop culture, how they claimed to be bigger than Jesus, how they put a sitar on “Norwegian Wood (This Bird Has Flown).” Their legacy is self-sustaining and nearly sentient by this point; the music has practically become a secondary concern.

In that regard, it’s difficult to overstate the importance of “I Want to Hold Your Hand” to the Beatles’ career. The song launched the British Invasion of the ‘60s, creating a vogue for U.K. translations and transformations of U.S. blues, rockabilly and rock. Other groups — the Who, the Stones and to a lesser extent the Kinks — had similarly big hits, but none managed to reach the Fab Four’s level of popularity, much less sustain it for half a century. The band maintained their relevance by taking a lot of drugs, writing about taking a lot of drugs, indulging a lot of studio experiments that expanded the sonic palette of pop music, and implicitly disowning “I Want to Hold Your Hand.” Some might call it “maturing.” As the ‘60s wore on, the Beatles largely abandoned their early R&B excitability in favor of a trippier, more self-consciously cerebral approach to music-making. Pop became high art, and the Beatles started thinking with their brains instead of their hips.

Who can deny the warped pleasures of “The White Album” or the stately valediction of “Let It Be”? Writing off their later material is folly, but by mapping the trajectory from “I Want to Hold Your Hand” to “Abbey Road,” the Beatles set the course that every subsequent band was expected to follow. They defined for generations the criteria of success in pop music: culture-defining celebrity, commercial viability, controversy and gentle subversion, sustained creativity, decades-spanning longevity, and constant musical development. They are the reason we use the word “important” to describe a pop musician, as if that were any artist’s ultimate goal. Of all the rock 'n' roll myths perpetuated by the baby boomer generation, this is perhaps the most pervasive and arguably the most poisonous, as it prizes a very particular kind of expression over all others — usually, white, hetero, male, album-oriented expression.

This is not to say that the Beatles eradicated jubilant, rhythmic, some might say frivolous pop music from the airwaves (for example, Sam the Sham & the Pharoahs’ “Woolly Bully,” which was one of the most popular songs of 1965, the same year the Beatles released both “Help!” and “Rubber Soul”). But they did change the way we hear and value music so many years later. Rather than endlessly commemorating and recommemorating the Beatles as a gateway into the world of music that matters, we would be better off recognizing them as a very particular, somewhat narrow, and even distorting lens through which to view a chaotic and diverse pop history. Their constant lionization distracts from the incredible wealth of music from this era: the one-offs, the weirdos, the failures, the before-their-time visionaries, the radical, and in many cases the non-white.