How to win Thanksgiving: A holiday guide to arguing with right-wing relatives

Your guide to dealing with relatives with awful views this long weekend. A special "Obamacare train wreck" edition 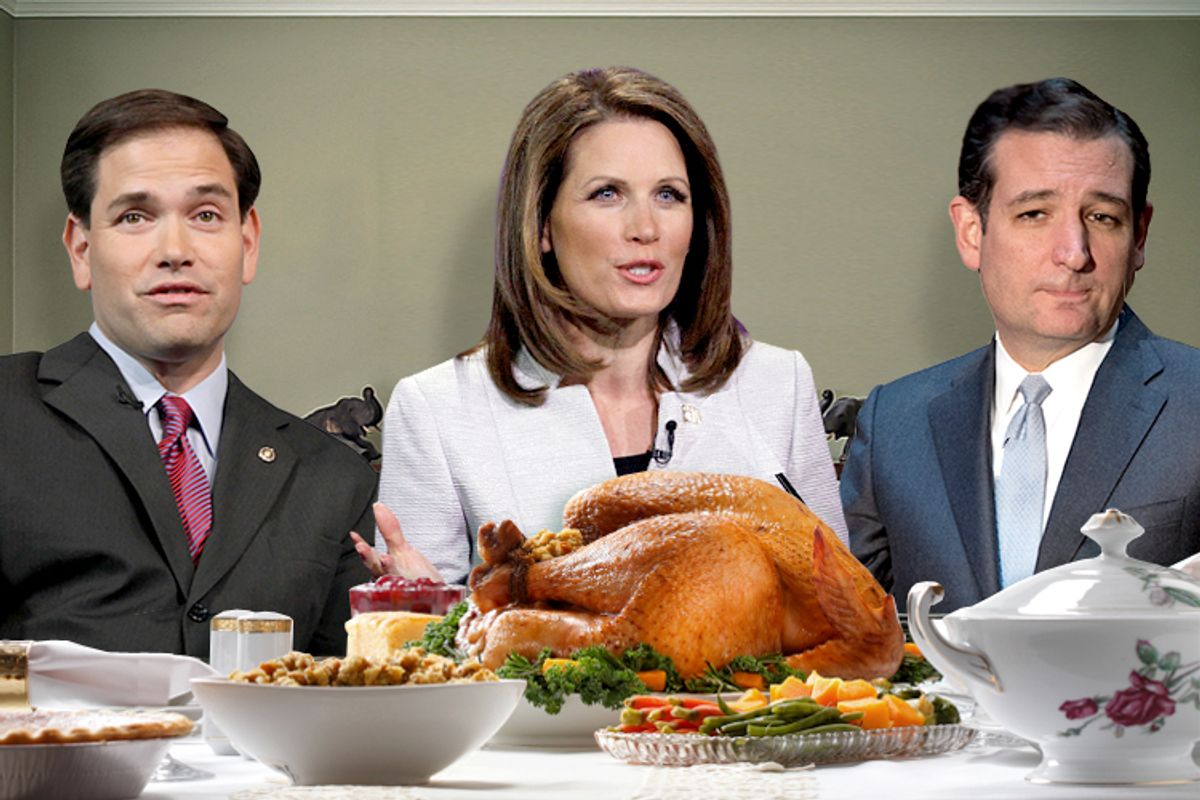 Once again, Americans everywhere are spending a wonderful day with their families, being thankful for things, and also probably getting trapped wherever they are for days because of storms and mass nationwide flight delays and cancellations. But while family is a wonderful thing, sometimes people in your family hold very different beliefs than you do about important things like race relations and Islam. Once again, I am here with your guide to arguing intelligently, or at least coherently, with your right-wing relations. (Here are my guides from 2012 and 2011.)

As always, I can't stress this enough: The first rule of arguing with your family members on holidays is don't argue with your family members on holidays, because let's all just try to enjoy one another's company for once, without screaming and name-calling and so on. Many of your older relatives are lied to and scared by evil people on the radio and television, and that is not their fault. It's usually best to change the subject, or go outside for some fresh air/cigarettes. But if you must, here are some reasonable things to say.

I have a feeling most of the discussions around the table this year will focus on healthcare, so that is what most of this year's guide is about.

Obamacare is a disaster

I mean, not really, so far. It is still too early to tell, and most Americans believe that the law hasn't affected them at all. Many of those Americans could be incorrect, as the law has changed how insurance companies treat all of us, regardless of whether we purchase individual insurance or receive it through an employer, but right now "Obamacare" doesn't mean much to most people. (If you want to run through the benefits, there's the insurance for young adults through their parents thing, and the preexisting conditions thing, lots of preventative care things are now "free," and some prescription drugs are cheaper for people on Medicare.)

But yes, the law has its flaws, in its construction and its execution, but so far those flaws aren't really hurting very many people.

The broken website proves that federal IT contracting is a huge, broken mess, but anyone who has ever read anything about federal IT contracting before this already knew that. (So, like, 10 people knew that.) The broken website makes a fine metaphor, but if it's up and running soon, it won't have affected all that many people, or doomed the law. And if it's not fixed soon, well, then there will be some trouble, possibly major trouble, with the individual insurance marketplace and the mandate, but the goal was always to get some uninsured people insured right away, and all the rest of them insured over the course of a few years, so small initial enrollment numbers probably won't be the disaster everyone is claiming it will be. Basically, wait for the new year before saying HealthCare.gov killed Obamacare.

So, yes, Obama lied when he said "you can keep your plan," or at least he omitted all these caveats that he probably assumed were implied in his statement, but the actual villain here, as always, is insurance companies. (No one likes insurance companies, right? Here you can feel free to agree that a healthcare reform bill that relies so heavily on private insurance companies is inherently flawed, it's too bad we can't just have Medicare for everyone!) The insurance companies first sold most of these people crappy plans that covered nothing and would've left them open to massive bills had they faced any serious medical problem. The insurance companies then decided that, instead of changing their plans to meet the higher standards of coverage required under the ACA, they would cancel all of them. The companies then sent everyone letters saying that their plans had been canceled, and in those letters they attempted to sell more expensive plans to people, without pointing out that many of those people are now eligible for subsidies or able to choose more affordable (and better) plans through other insurers. These "cancellation letters" are primarily sneaky, misleading sales pitches. Multiple state insurance regulators have criticized and fined insurance companies for sending them.

It's true that millions of people who had currently been in the individual insurance market now face disruption and change, and everyone hates change, but the vast majority of those people were getting ripped off, and lots and lots of them now qualify for better coverage at an affordable rate. Those stories are less "news-worthy" than stories of people facing "rate shock," though, and so they are less often mentioned on the news.

It's sort of moot, though, because now insurance companies will be allowed to continue selling those deeply crappy plans to people, though they will have to send everyone a letter explaining how crappy they are.

OK, well, first things first: Are corporations people? Can private, for-profit corporations be said to have a religious faith? A corporation's founders, its owners, its board of directors or its shareholders all are welcome to practice any religion they choose without government interference, but how does a corporation worship? The entire point of corporations is that they're separate legal entities from the individuals who make up the corporations -- otherwise, limited liability wouldn't be a thing -- and while corporate "free speech" is at least defensible in the sense that corporations can "speak," there's no precedent for saying for-profit corporations practice religion.

Churches, ministries and nonprofit organizations that are primarily religious in scope have always been exempted from the contraception coverage requirement. We are now talking about a chain of stores having some sort of right to practice religion by refusing a certain health benefit to its employees. The implications of the Supreme Court granting corporations a right to religious liberty could be devastating to civil rights and equal hiring laws. Maybe you should think through the idea of a world in which corporations can claim exemption from laws for religious reasons. They could refuse to hire Jews, or decline to offer maternity or paternity leave to same-sex or unwed parents. Do you want your boss to have the ability to discriminate against you based on religion? (Note: This line of argument only works if you're not talking to a corporate executive, or a corporation itself.)

Death panels are real because Mark Halperin said so

First of all, Mark Halperin is a colossal buffoon. Secondly, he walked back his "death panels" claim. Thirdly, and this is the important one, no, there are no death panels in Obamacare. They do not exist. There is a board that does not exist yet that will recommend ways to bring down Medicare costs. This board is explicitly barred from rationing, or recommending anything that would cause Medicare patients not to receive care.

The "nuclear option" is a naked power grab and unconstitutional

Hopefully you know this one, because we've all been reading variations on this every week for a few years now: The filibuster is not in the Constitution. The 60-vote threshold for all Senate business is a new development, and not an old tradition. No prior president has faced this level of obstruction by a minority party in the Senate, and while Democrats did attempt to block a number of Bush's judges, no prior president has ever faced anywhere near as many cloture votes on executive nominees. Invoking the 60-vote threshold for executive branch nominees used to happen almost never. Now it's routine, and there was no way to convince Republicans to stop doing it.

Republican obstruction was unprecedented and an affront to the laws of the nation and the entire concept of representative democracy. Changing the rules of the Senate should've happened years ago. The filibuster itself is more likely to be unconstitutional than a majority of senators voting to change the rules of the Senate.

No, that's stupid, plus also the conventional modern view of Neville Chamberlain is grossly unfair and that's mostly because Churchill was a big asshole but it's also because the Munich metaphor serves a very useful purpose for warmongers. So, this deal, it's not that bad, no, and also why do you want to go to war against Iran so much anyway, you psycho?