Why I listen to "Exile on Main Street" every Thanksgiving

Everybody has their own conversation with the album. Mine is about a past love, and the traditions it left behind 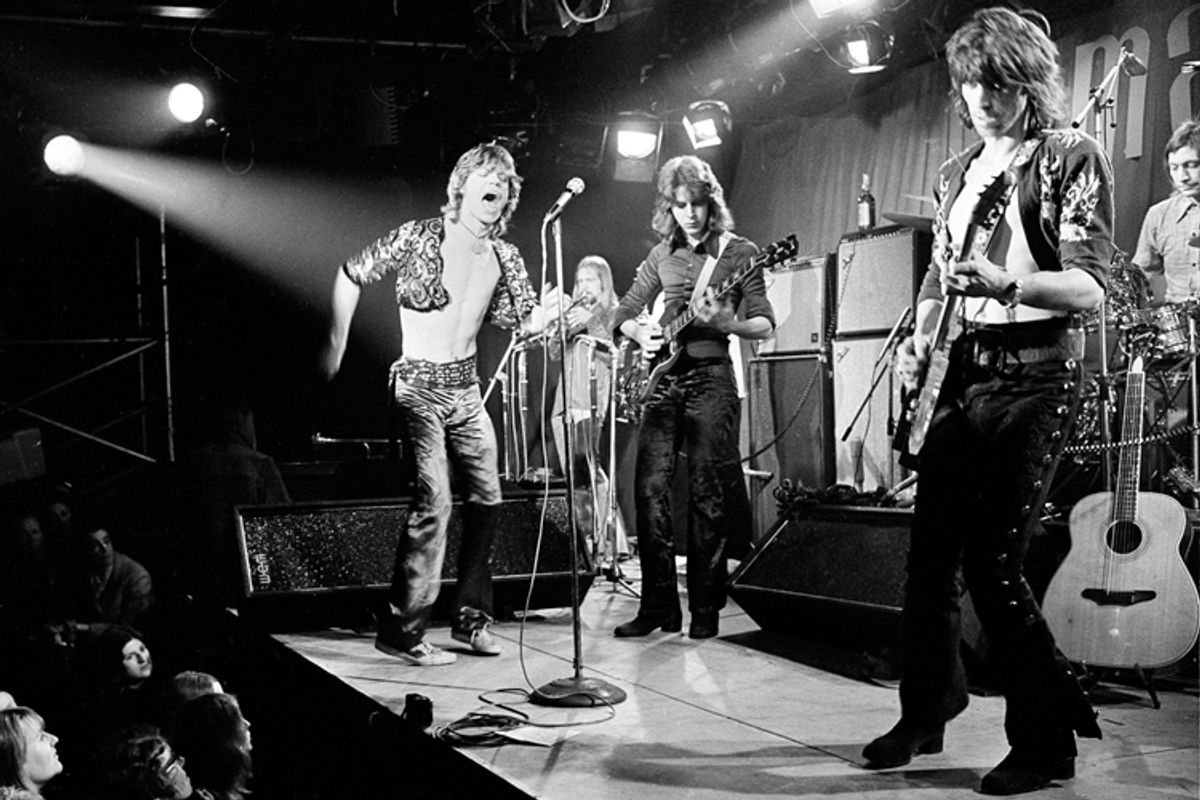 They always say you don’t choose whom you fall in love with. There’s something primal that pulls you toward the other person, a kind of gravity. When my mother used to describe that kind of love, she said it was like the universe trying to put itself back together after the big bang, the forces straining to keep us close even as we continue to drift. My mother wasn’t talking about Mick Jagger, but I’d like to believe that she was. A person only gets a few great loves in their life, the romances that help define them and give shape to their heart, and the Rolling Stones simply got to me first. I fell for them decades too late, more than 40 years after “Satisfaction” changed rock forever, but their music wasn’t an artifact of the past. It was a fact of the present, just as tangible and necessary as a limb.

Of course, the ultimate act of Stones fandom goes to Liz Phair, the singer-songwriter whose "Exile in Guyville" was a track-by-track response to the Stones’ most indelible record, 1972’s "Exile on Main Street." In an interview with Rolling Stone, the singer described her obsession with the Stones album as living in “dream time.” "I would really pretend that all the answers to all my questions were in Mick's lyrics and this record,” Phair told Rolling Stone, “and I would dream I was having this conversation." "Exile on Main Street" is designed to be played on a repeated feedback loop, perfect for the obsessive listener in all of us. You can see then why Phair needed her own fan-fiction record to respond to the album. "Exile on Main Street" doesn’t just talk to you. You need to talk back.

Of course, I didn’t know any of this until I found the CD in my boyfriend’s car, "Exile’s" two discs jammed in the space underneath his radio, one usually occupied by mysteriously sticky pennies. Mark checked it out from our neighborhood library as part of a year-long music binge -- one that included everything from Bjork and Joanna Newsom to John Zorn -- and he’d been checking out so many records that he forgot he had it. The two of us had a long drive from our apartment in Cincinnati to his parents’ house nestled in the foothills of middle Kentucky, followed by another trek back to my parents. As both sets of parents are divorced, this totaled four trips and a lot of road to cover. I figured the Rolling Stones were a good start.

This was our first Thanksgiving together and my first holiday as part of someone else’s family. I had met his parents before, but we’d never interacted under the pretense of kinship. I was the interloper at the table, not someone you had to make space for under the tree or who counted as the recipient of a holiday stocking. I was considered a guest and guests usually leave after a couple of days, when their messes can be tidied and life can go back to its usual order. I’ve never been someone who is good with family, not even my own, and the fact of being integrated into someone else’s dysfunction made me even more nervous than the prospect of eating four turkeys, which sounded like a coma waiting to happen. I knew that Mark had to be feeling the same way, being adopted as a son to parents he didn’t even know yet. They always say that Thanksgiving is the coming together of families and cultures, but anyone familiar with American history knows that’s not true. The holiday masks a history of violence, the struggle of people trying to coexist and failing. Thanksgiving is just the beginning of the story.

These are the traditions we inherit, passed down like an old record that we might have forgotten, and I hoped that playing Exile would help me tune it all out. The album’s first track, “Rocks Off,” is a brutally honest depiction of drug use, using heroin as a metaphor for the joys and perils of escape. “Splattered on the dirty road,” Mick Jagger sings, “I can't even feel the pain no more.” Jagger’s lyrics began to take on new meaning as we barreled through the Kentucky dusk -- with each highway leading to more road. Like the album itself, it seemed like asphalt would never cease, the lines continually punctuating the ground like strokes of a ceaseless typewriter. But the day wasn’t just being written. It was being sung, and as Jagger jets across the country’s political climate in “Rip This Joint,” coasting from Memphis to D.C., it felt like Mick was pulling toward something, a travelogue of the undiscovered.

If you’ve never driven through Kentucky, there’s no better time than a November morning, as your pre-coffee daze mingles with the crispness of the autumn air. Everything feels clearer and sharper somehow, as if you’re just waking up to something. I rolled down the window, forgetting the cold, and it almost didn’t matter if we would ever get to anywhere. Mick Jagger meant “Tumbling Dice” to be a cautionary tale about gambling addiction, but in the moment, it felt thrilling somehow. The song, to me, was about living in the moment and finding connection, even at your lowest. “I'm the rank outsider,” Jagger howls. “You can be my partner in crime.” No matter what Jagger intended by those lines, I was in the process of making my own meaning.

But unlike Liz Phair, I didn’t just use this as opportunity to have a conversation with the Rolling Stones. Nestled in the comfort of our car and the presence of Jagger’s “loving cup,” I knew that the only holiday that meant anything to be was the celebration we were having. Mark and I sat in intermittent silence as we grew closer to our many destinations, but it wasn’t an American Gothic moment, grimly awaiting our audience. This was a silence borne out of comfort and familiarity, not the primal love that my mother advertised but something deeper and more intricate, the kind of belonging that comes from gentle friction, masses carving out a space in each other's lives. You spend time developing this space for someone slowly until your shapes just fit together. I put my head on his shoulder, and I knew my exile wasn’t solitary. We were going on this trip together.

The following Thanksgiving was our last as a couple -- as silent as the previous one but with a different meaning this time. We cooked dinner for just the two of us, one turkey taking the place of a cacophony of familial squabbling, and I put on "Exile on Main Street" while we cooked. We had recently moved to Chicago, and it was clear that unlike the pilgrims, we wouldn’t survive our first winter. We had eroded the whole way without noticing, the product of too much gravity and problems we were too young to handle. I didn’t keep the relationship, which ended with the melting of the snow, but I kept the record with me. Most people keep sweaters or old photographs of mementos of the almost life they built with someone, but I’ve got “Ventilator Blues,” its lyrics still just a mystery to me as they were on the highway five years ago. Jagger’s advice is that when it feels like life is “stepping on the accelerator, everybody's gonna need a ventilator.” I have never figured out what the hell he’s talking about.

Liz Phair found out the hard way that you’ll never find all the answers in music, even with the liner notes to help you out. The thing that has long baffled critics about "Exile in Guyville" is that as a response album, it doesn’t quite make sense paired side-by-side with its inspiration. If Phair is answering the queries about American life that Jagger is raising, the result just leaves you with more questions and more puzzles to solve. When Liz Phair was recording "Guyville," which just had its 20th anniversary this year, she had to pretend that she could find the answers in his music, a way to go forward as an artist. However, Phair knew all you really have is what’s in your own head, and listening to "Exile on Main Street" on repeat tells you more about yourself than it ever will about Mick Jagger.

"Exile" has become a tradition for me. I listen to it every Thanksgiving, not as a memento of the past but as part of a relationship that will continue to evolve even as others come and go. We have the traditions that are given to us by historical edict, but the more important ones are those you build for yourself, the constants that remind you of who you are and where you’ve been. One of the following Thanksgivings I spent in Paris, where the fourth Thursday of the month means nothing to the French, but my roommates planned a late meal to give me solace for what I might be missing. However, by the time all of us got home from work, it was too late to cook anything -- so we scoured through the fridge for anything we could gather. This consisted mostly of hummus, cheese and stale baguettes, the best we had to offer history.

We cracked open a bottle of wine to get drunk and watch "The Big Bang Theory," an unlikely popular favorite in France. With French dubbed over the English, I thought of all the cultural references that had to be cut out for French consumption, the jokes that would have hit the cutting room floor. I knew that even though the details might be lost in translation, the French weren’t missing anything, and I wasn’t either. I turned off “Soul Survivor” and joined everyone around the television, as I was pulled toward other forces. I don’t know what traditions this year has in store for me, as I break bread with friends at a Thanksgiving celebration back in Chicago, but I’m happy to be back at the beginning, ready to press play all over again.