Lay off Michelle Obama: Why white feminists need to lean back 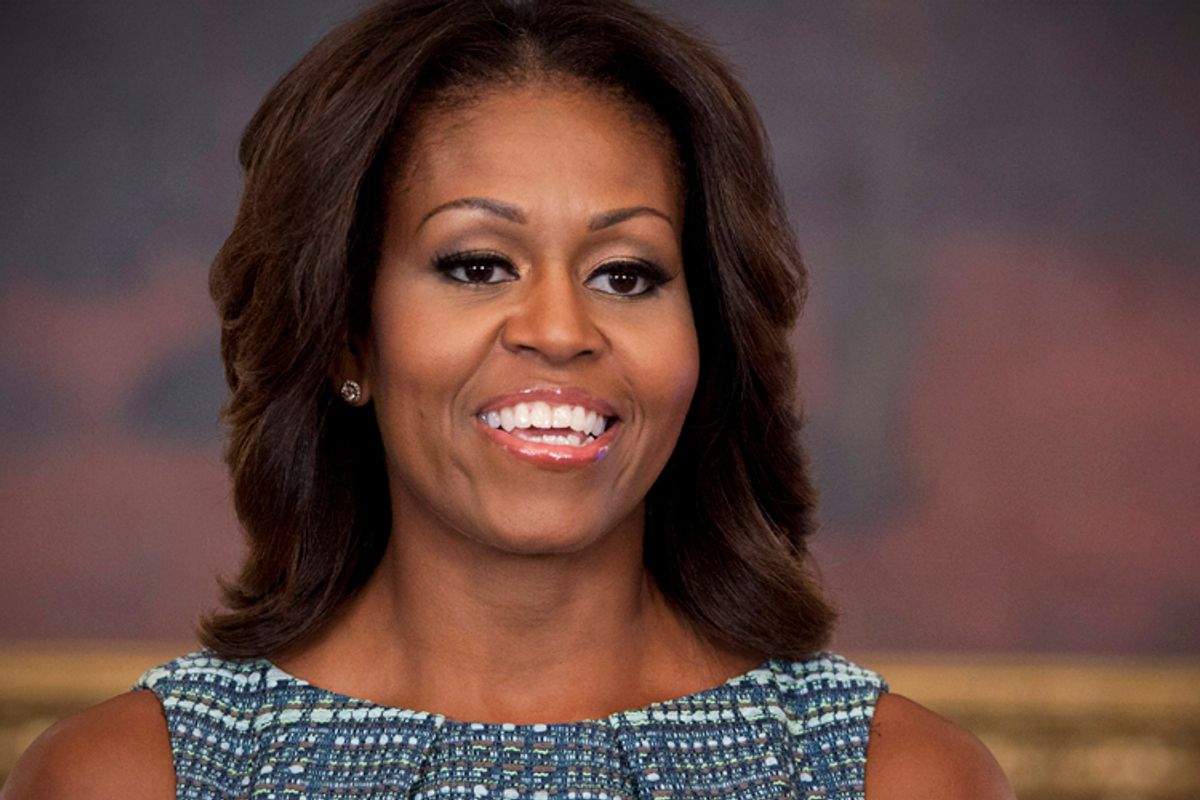 In a column at Politico last week entitled “Leaning Out: How Michelle Obama Became a Feminist Nightmare,” Michelle Cottle cast First Lady Obama as a feminist failure, declaring that though “somebody will shatter the conventional first lady mold,” it “won’t be Michelle Obama.”

My message to white feminists is simple: Lean back. Way back. And take your paws off Michelle Obama. Black women have never been the model for mainstream American womanhood, and to act as though she takes something away from the (white) feminist movement is intellectually disingenuous and historically dishonest. Your molds were never designed to contain the likes of a Michelle Obama in the first place. And feminism’s biggest nightmare isn’t Michelle Obama; it is white feminists' consistent inability to not be racist.

Though Cottle fully acknowledges that the intersection of race and gender “puts Michelle in a treacherous spot,” she co-signs the assessment of Linda Hirschman, who argues that the FLOTUS, in terms of gender, has largely relied on “an almost music-hall-level imitation of a warm-and-fuzzy, unthreatening, bucolic female from some imaginary era from the past.”

There are many problems with this assessment. Neither Cottle nor Hirschman manages to make her assessment of Michelle Obama’s gender politics or performance while holding race constant. But it is race that shapes black women’s access to narratives of womanhood, and the protection that comes with femininity. In other words, black women were never viewed as “unthreatening and bucolic.” (Let us not forget the routine dustups that emerge whenever the first lady shows her arms or her legs in public.) That narrative has been the sole and privileged access of heterosexual, middle-class white women. And white women do not want to acknowledge that this narrative has given them a particular kind of white female privilege -- such narratives about delicate and unthreatening white femininity drove the creation of the black male rapist myth and necessitated the labor of black women domestics to maintain white women’s unsullied delicacy and virtue.

Thus, they can’t rightly view Michelle Obama’s gender politics as retrograde, when the ways in which femininity is refracted and experienced through the lens of race is taken into account.

To further make her point, then, Cottle turns to the work of black feminist Keli Goff. Goff wrote a column charging Mrs. Obama to become more overtly political again, now that “she no longer has to worry about her public image as a super-strong, super-fierce black woman who might cost her husband votes.” Goff hopes that the FLOTUS will become more outspoken in calling out racism directed towards her husband, advocating for the first black women to be appointed to the Supreme Court and letting people know that she cares about more than gardening and obesity, among other things.

Now that President Obama has secured a second term, Goff wants Mrs. Obama to step fully into the role of being a race woman, in some combination of Mary McLeod Bethune, Amy Jacques Garvey and Coretta Scott King.

And this is where it becomes challenging for me. I am not here for the facile arguments from white feminists about what Michelle Obama is supposed to represent for all women. Until these mainstream white feminists really grapple with the history of racism and the ways it has shaped all of our performances of gender, then, frankly, I think they should be quiet.

I also acknowledge and agree with black feminists like Melissa Harris-Perry and Kirsten West Savali who have talked about the importance of Michelle Obama’s mom-in-chief role in countering persistent narratives about bad, delinquent black mothers.

As Savali notes, “In my feminism, we understand that raising intelligent, confident Black children in a loving family is one of the most revolutionary acts a Black woman can commit in America.”

But Savali also notes: “I enjoy the first lady’s dougie as much as the next person; but I would also love to see her use her position to say, “I have daughters and they are Renisha McBride.” I would love for her to engage in substantive conversations about depictions of Black women in the media, in addition to issues such as street harassment and sexual violence within the Black community.”

I join her in asking for more from Michelle.

For instance, last spring, Mrs. Obama gave a talk at Morgan State University in which she lamented a world in which, unlike children from prior generations, many black children today aspire to be “rappers and ballers,” rather than following other more presumably respectable pursuits. I, for one, balked at the conservatism of her analysis, and took great issue with her willingness to cast the challenges that young black students today face as a problem of motivation, rather than as a problem of failing and under-resourced schools, the deprofessionalization of teaching via programs like Teach for America, the gutting of teachers unions and the defunding of public education.

So to be honest, I find the analyses from my fellow black feminists, who stand at the ready to defend the historical and social significance of Michelle Obama’s mom-in-chief role, to be wanting. Black women have always managed to raise good families, support their husbands and have a healthy level of political critique. And when we did invoke respectability politics in the past, there was a strategy behind it. The analysis didn’t begin and end there.

I do think black feminists can wish for more from this first lady, while still being attentive to the minefield of historical and contemporary ideas that she is being forced to navigate. In doing so, we might have to acknowledge that because of President Obama’s tepid record on black issues, Michelle Obama’s choice to have his back often means she doesn’t publically have our back as we might wish. The fact that she is ride-or-die for Barack makes us love her all the more. And that struggle between supporting your man and his vision for the nation versus being the full, forceful expression of your black womanhood is a struggle that black feminists know all too well, and are uniquely poised to sit with, not uncritically, but rather in a productive space of discomfort.

Black feminists want her to show up and show out for us, because black families and black futures depend on it. And until white feminists share this kind of anti-racist agenda, then they should stop calling black women nightmares and start acknowledging their own complicity as what Lillian Smith called “Killers of the Dream.”