Forget "Double Down." Here's the real story of the 2012 election

The takeaway from Obama-Romney is not debates or golf games. It's a tale about the surveillance state and 1 percent 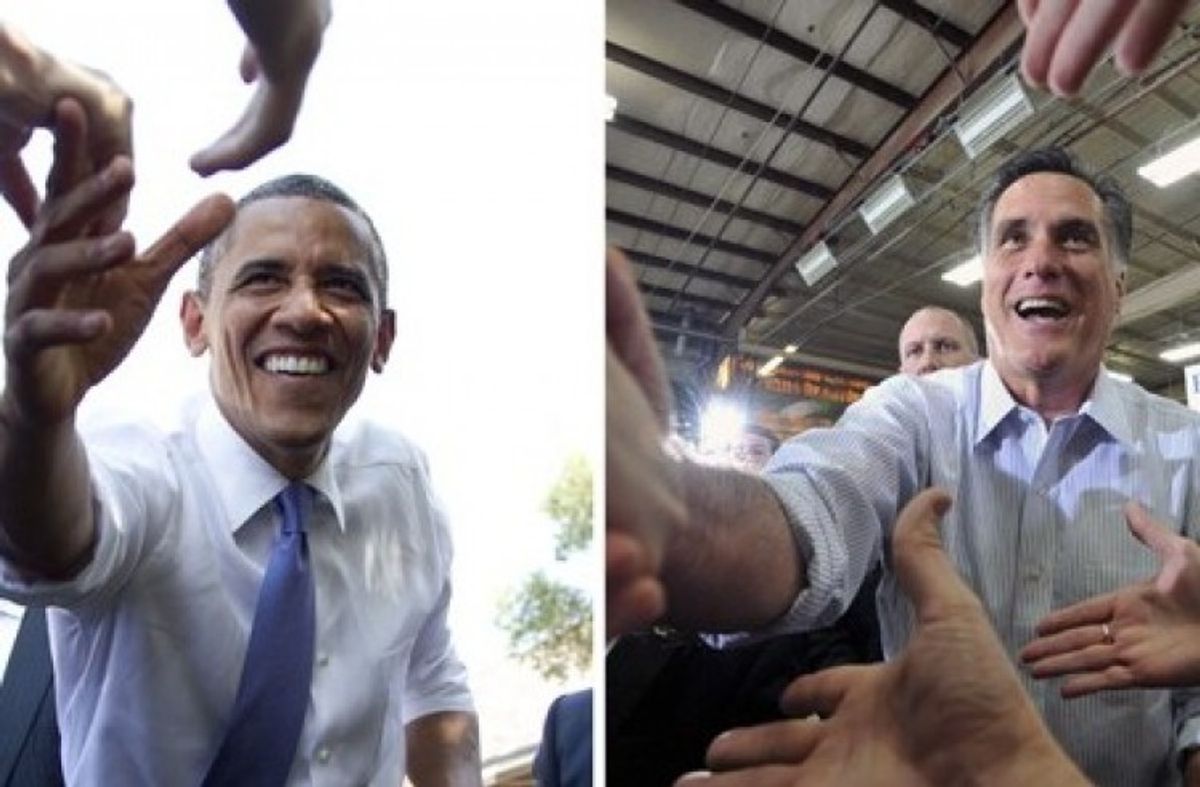 It fueled a couple days’ worth of chatter on “Morning Joe,” and it no doubt lined the pockets of its authors quite handsomely. But all in all, “Double Down: Game Change 2012” didn’t leave much of a mark. To be fair, with Sarah Palin on the sidelines and a presidential antagonist as dull as Mitt Romney front-and-center, the drop-off from the first “Game Change” to the second was probably inevitable. But let’s not be too fair — Halperin and Heilemann’s book also just kind of sucked.

There are two possible explanations why. The first, voiced by Mother Jones’ Kevin Drum, is that 2012 was simply and fundamentally a boring election. “The truth is that the 2012 campaign just wasn't very interesting,” Drum recently wrote at his blog. “[T]here were no novel issues in the campaign, just an endless re-litigation of the same themes that had been occupying us for the past three years.” Drum grants that Obama’s historically bad first debate performance injected a little uncertainty into an otherwise rote proceeding, “but even that,” he writes, “wasn’t much.”

But I think Drum lets Halperin and Heilemann off the hook too easily, which brings us to the second explanation for the failures of “Double Down”: its relentless focus on gossip and anecdote and its indifference to analysis and data. Halperin and Heilemann will purport to tell you everything David Axelrod was thinking on the night of the second presidential debate, but when it comes to the larger social and economic forces that shaped 2012, they got nothin’. When the personalities involved are as big as Sarah Palin or John McCain, that’s a forgivable sin. But when the patently dull Romney and the secretly boring Obama are your main characters? Well, there’s a reason the authors devote a chapter to New Jersey Governor Chris Christie, who didn’t even run.

It’s a shame, too, because as a recent working paper from the Roosevelt Institute shows, a more analytical view of the 2012 election actually makes the contest, in retrospect, far more compelling than Halperin and Heilemann’s limited telling would suggest. Titled “Party Competition and Industrial Structure in the 2012 Elections: Who’s Really Driving the Taxi to the Dark Side?,” the paper, by Thomas Ferguson, Paul Jorgensen and Jie Chen takes a long, hard look at where the money that fueled 2012 actually came from. Their findings reveal not only the depths of plutocracy to which we’ve sunk, but also shed some much-needed light on the burgeoning surveillance state (the dark side) and its activities in the political sphere.

While most people at least intuitively understand that big-time political campaigns are financed largely by the very wealthy, Ferguson and his co-authors’ paper reveals the degree to which these national operations are funded by a vanishingly small number of people. “We really are dealing with a system that is of by and for the one percent — or the one-and-a-half percent,” Ferguson told Salon in a recent interview. And the numbers bear him out. Assuming that contributions over $500 come largely from the one percent, the paper finds that no less than 59 percent of Obama’s funding, and 79 percent of Romney’s, emanates from that small sliver of society. This contrasts rather jarringly with the popular image of the 2012 campaign as one pitting Obama’s middle-class constituency against Romney’s plutocratic backers. It was more of a plutocrat vs. plutocrat affair.

Even on that score, however, the lines of demarcation are fuzzy at best. It’s undeniable that Romney was more popular among big business than Obama, but the differences between the two were smaller than you’d imagine. In fact, the authors “suspect” that “the president probably enjoyed substantially higher levels of support within big business than most other modern Democratic presidential candidates, even those running for reelection.” Obama got walloped when it comes to what you could call Koch brother industries — oil, gas, plastics, etc. — but he did OK with Wall Street and, especially, the telecom and tech industries.

It’s that last point — Obama’s popularity among the industries that make up the surveillance state — that forms the most surprising and relevant takeaway of the paper. In the wake of the ongoing revelations from Edward Snowden of a national security state-turned-surveillance behemoth, the level of financial support the president enjoys from the industries working with the government to spy on Americans starts to make sense. But to compare this synchronicity to Obama’s 2008 campaign, and its pledges to rein in and civilize the Bush-Cheney post-9/11 national security leviathan, is to risk vertigo.

The distressing conclusion to be drawn from all this is that those interested in truly curtailing the surveillance state will find few friends within the two-party system. Democrats, after all, were supposed to be the ones who were more cautious, pragmatic, and civil liberties-minded when it came to surveillance. Voicing a sentiment that’s no doubt still held by many, if not most, Ferguson told Salon that, prior to his research, he “thought there was more distance between the Democrats and the Republicans on the National Security State.” That distance, if it ever was significant, is certainly gone now.

It turns out, then, that Halperin and Heilemann weren’t wrong to call their book “Double Down” — they were just wrong about who was doing the doubling. It wasn’t so much Barack Obama or Mitt Romney; and it wasn’t so much the American people. Instead, it was the surveillance state, doubling down on a president many initially supported because they thought he’d rein in an out-of-control system of secrets and spies. As Edward Snowden has shown us with abundance, they knew what they were doing.