Sorry, neoliberals: Inequality is driven by greed, not technology

A new study shows low wages are really caused by low minimum wage, weakened unions and the effects of globalization 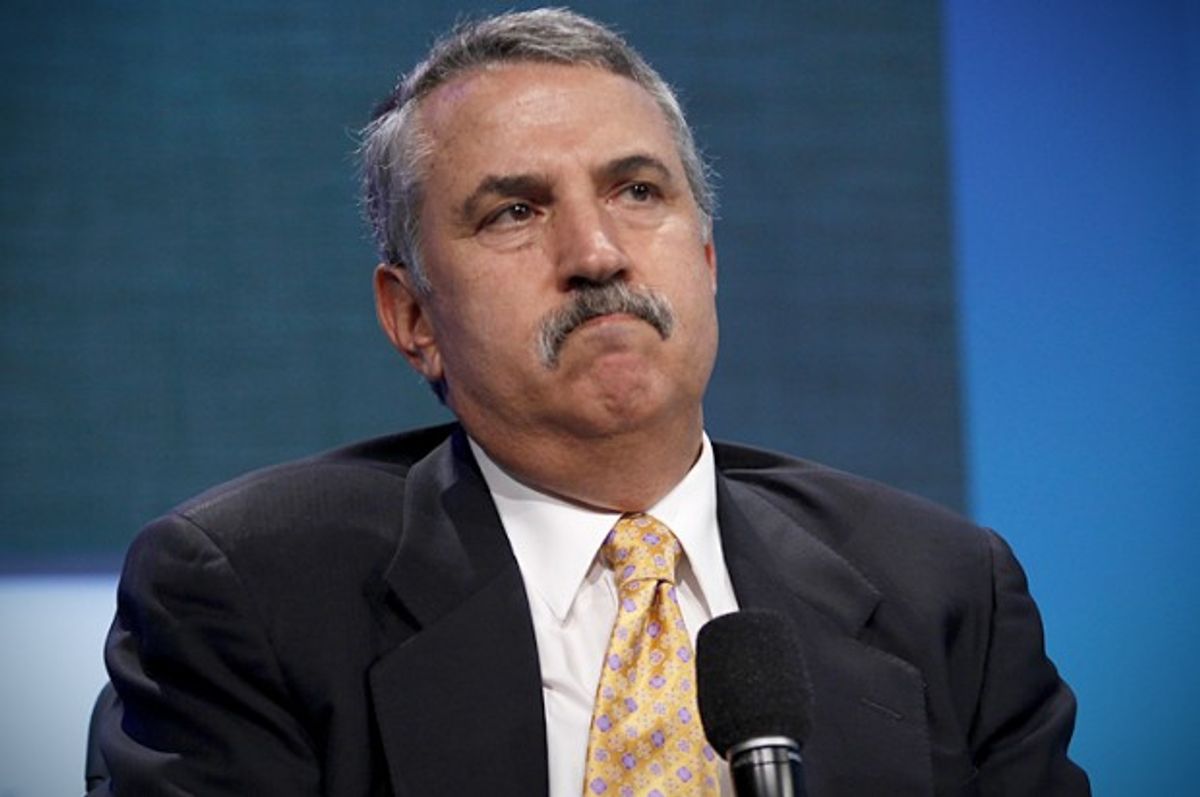 Inequality may be the greatest economic challenge of our generation. Yet despite extensive academic debate, there is still no consensus as to its causes. Earlier this year, Tyler Cowen sparked a debate on the subject with his book "Average is Over," in which he argues that inequality is driven by new developments in technology that give some workers who can capably use the technology a wage premium over those who can’t. Future innovations in technology, he argues, will contribute to hyper-meritocracy and further inequality.

His argument echoes the conventional wisdom in economics, formulated by Lawrence Katz and Claudia Goldin, that skill-biased technological change can explain most of the increase in inequality. The premise is that technological developments have favored college-educated workers over unskilled labor, thereby increasing inequality. Since it was formulated, SBTC has drawn criticism. A 2002 paper by David Card first drew attention to potential holes in the explanation: a short period of stabilization in wage inequality in the 1990s during a technological boom and the failure to explain wage gaps between men and women as well as blacks and whites. A 2012 paper by Daron Acemoglu and David Autor noted other failures in the theory, namely that it could not explain the divergence in incomes that had occurred among skilled workers and why the real median wages could decline during a period of increasing productivity.

Now, Lawrence Mishel, Heidi Shierholz and John Schmitt have released a new study that questions SBTC as an explanation for increasing wage inequality. Mishel et al. argue that “job polarization,” the premise that more jobs have been created in low-wage sectors and high-wage sectors, thus driving wage inequality, doesn’t actually explain the problem. On the one hand, high-wage occupations have not significantly expanded their share of the workforce since 2000. On the other, low-wage jobs have not increased as a total share of employment since 1979.

They find that changes in the occupation structure do not affect the wage structure, so if technology causes a shift from manufacturing to retail, this doesn’t necessarily entail a shift in the wage structure. They find that inequality is increasing within occupations, not between occupations as the SBTC narrative would predict. The SBTC narrative relies on the idea of an “education premium,” i.e., people with higher education reap the benefits of technological progress. But Mishel et al. find that wage inequality has grown strongly since the mid-’90s while the education wage premium grew little. Wages for college graduates have flattened over the last 10 years, even among science, technology, engineering and mathematics (STEM) and business occupations.

The implications of the different visions are profoundly different. Cowen envisions, according to The Economist, a future largely stripped of middling jobs and broad prosperity. An elite 10-15% of Americans will have the brains and self-discipline to master tomorrow’s technology and extract profit from it, he speculates. They will enjoy great wealth and stimulating lives. Others will endure stagnant or even falling wages, as employers measure their output with “oppressive precision.” Some will thrive as service providers to the rich. A few will claw their way into the elite (cheap online education will be a great leveler), bolstering the idea of a “hyper-meritocracy” at work: this “will make it easier to ignore those left behind.”

Mishel is more hopeful. After all, if inequality is the inevitable product of technological change, the only way to prevent higher inequality is to slow innovation. But Mishel is no Luddite. His State of Working America 2012 report (co-written with Josh Bivens, Elise Gould and Heidi Shierholz) argues that it is economic policy, not changing technology, that drives wage inequality. The decreasing value of the minimum wage, the weakness of unions and the impacts of globalization have all coalesced to keep down wages.

The problem, then, is not machines, which are doing a great deal to boost productivity; the problem is that the benefits from increased productivity no longer accrue to workers. In a provocative paper earlier this year, Josh Bivens and Mishel argued that the gains for the richest 1 percent were due to “rent-seeking” behavior by CEOs and financial professions, not competitive markets. As John Kenneth Galbraith said, “The sense of responsibility in the financial community for the community as a whole is not small. It is nearly nil.” The newly minted rich want to blame robots for declining wages at the bottom and their innate superiority for their disproportionate share of the income. But these excuses mask their theft of productivity gains that rightfully belong to the rest of us.

If inequality were inevitable, as many on the right believe, we would expect to see inequality rising internationally. But, in truth, different societies have responded to inequality in different ways. I talked to Janet Gornick, professor at the Graduate Center at CUNY and director of Luxembourg Income Study Center, about her work in the field of inequality. She tells me that “these transnational factors matter -- globalization, technological change, neoliberal reforms -- but what matters, perhaps more, is national-level policies and institutions. What is our evidence for that? Stark variation across relatively similar countries.” She tells me that some two-thirds of OECD countries have faced rising levels of inequality, however “the increase in inequality in OECD countries has been modest. The rise in the U.S. has been greater; there is something clearly going on at that national level, that is absolutely certain.” 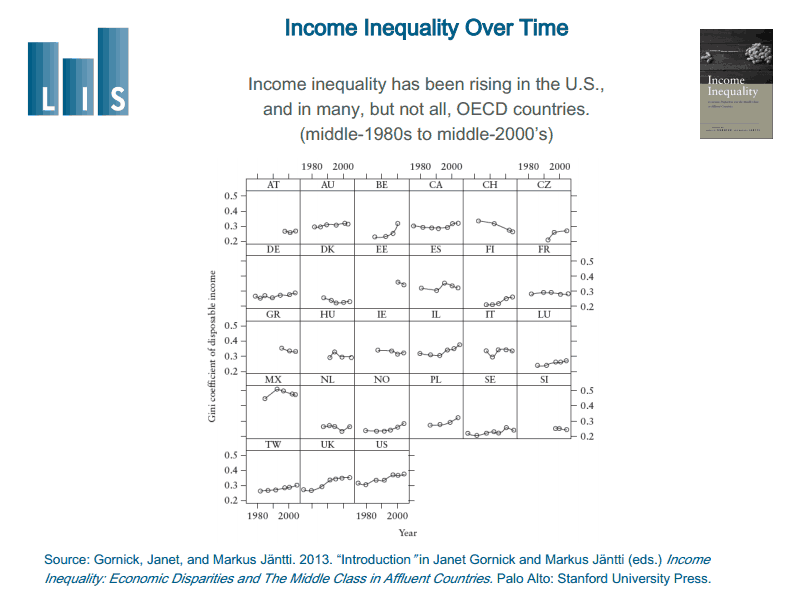 Mishel echoes the sentiment: “Other countries have institutions which don’t allow as much inequality -- a more robust welfare state, a strong role for collective bargaining, a stronger tax and transfer system.” 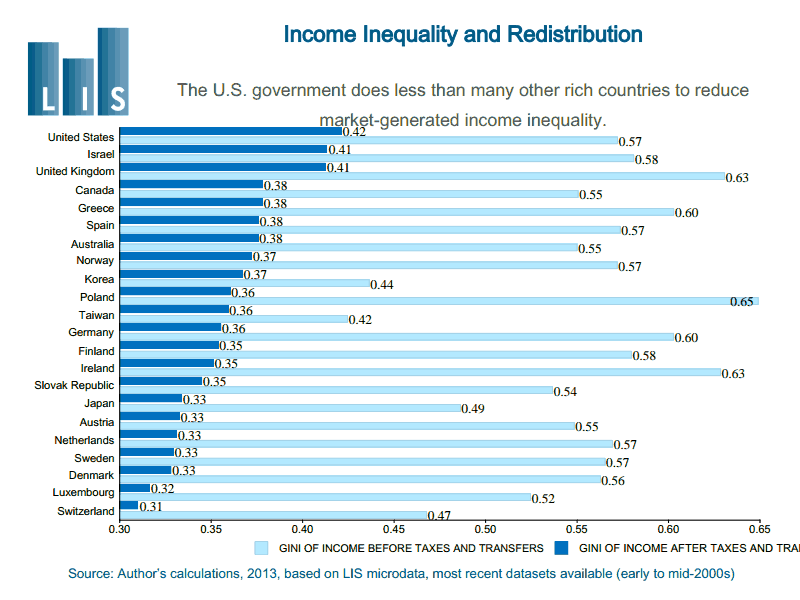 If inequality were the result of economic fundamentals, it would not matter who was in the White House, but rather inequality would be correlated to underlying economic trends. This is not true either. Larry Bartels finds in "Unequal Democracy" that income growth is more equal under Democratic presidents than it is under Republican presidents, pointing to the possibility that political systems drive inequality. 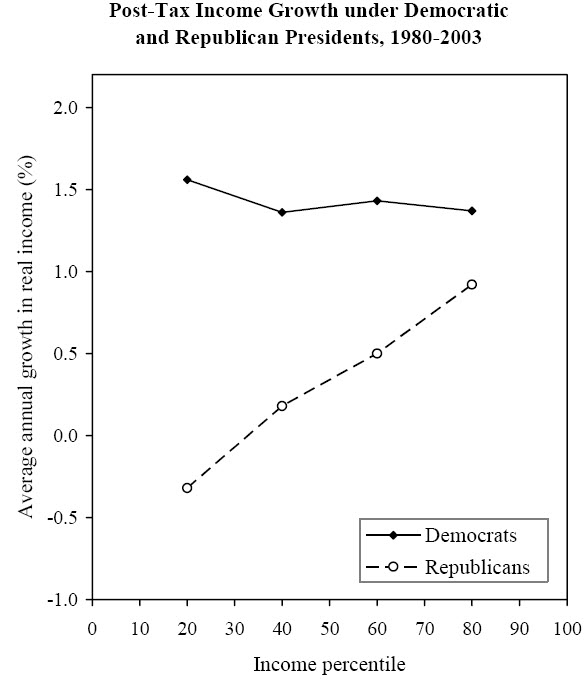 Since inequality is “man-made,” it can be ameliorated by changing our institutions. As Mishel said, “My interpretation that the outcomes we see are the products of policy decisions made or not made -- not raising the minimum wage, not reforming labor law -- is optimistic. We have it in our power to shape the future.” A recent article by Harold Meyerson in the American Prospect echoes this sentiment: “The extinction of a large and vibrant American middle class isn’t ordained by the laws of either economics or physics. Many of the impediments to creating anew a broadly prosperous America are ultimately political creations that are susceptible to political remedy.” Blaming technology is an excuse to abdicate responsibility. Calling for more education and upward mobility, while noble, is useless when wages are falling for college graduates and will still leave many workers behind. Social mobility is good, but it shouldn’t supplant the goal of reducing inequality (and it’s unlikely that high levels of upward mobility can co-exist with rampant inequality). As Terry Eagleton writes in "Across the Pond," “As long as you have enough willpower and ambition, the fact that you are a destitute Latino with a gargantuan drink problem puts you at no disadvantage to graduates of the Harvard Business School when it comes to scaling the social ladder. All you need to do is try.”

Workers must exercise political power to change the institutions that shape their lives. Walmart doesn’t have to pay its workers starvation wages and could easily pay them more. There is no celestial law that the richest 1% can plunder our common inheritance. We don’t have to crush workers when we globalize and we don’t have to destroy the environment in the pursuit of profits. Just as inequality is a choice, equality is a choice. By shifting the discussion away from the policy changes that have caused inequality, we legitimate it. As Eugene Debs said, “the class which has the power to rob upon a large scale has also the power to control the government and legalize their robbery.”