The 19 best cross-genre covers of all time 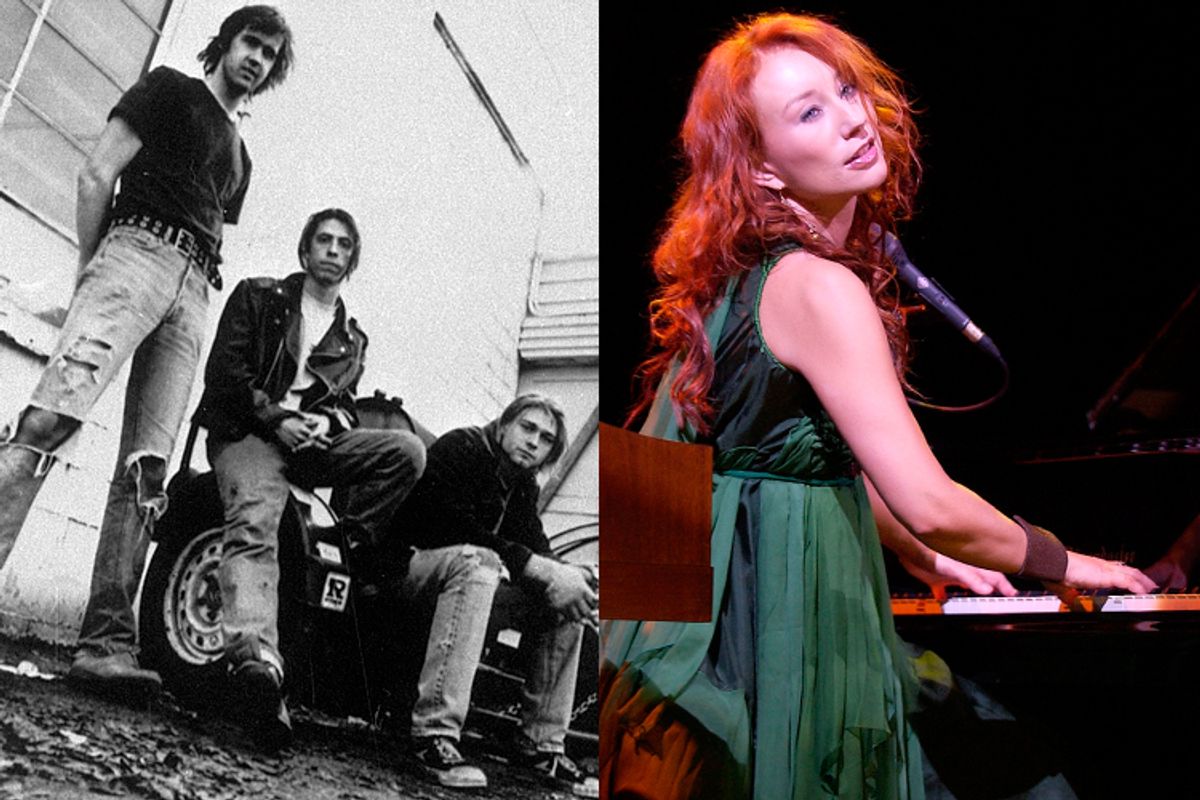 When Miranda Lambert covers Emmylou Harris or Mary J. Blige covers Aretha Franklin, it doesn't raise any questions — they're simply reaching back to a beloved and expected touchstone, confirming genre interests and affections for themselves and their audiences.  If Beyoncé covered Led Zeppelin, though, or Lambert covered Beyoncé, it would be a different kind of statement.

Performers do left-field cover versions for a lot of reasons. They might be showing their breadth, or pointing out an unexpected connection. They might be indulging a private enthusiasm, or trying for a crossover hit, or deliberately sneering.  The list here has examples of all of these, from the sublime to the absurd, and various combinations in between.

Cash's Sun Records peer Jerry Lee Lewis does a flat-out barnstormer of a Ray Charles cover, one that makes the connection between rockabilly and R&B crystal clear. Cash's version, from 1967's "Carryin' On," is distinguished by being more country — and also by being a complete, glorious train wreck.  Cash's trademark talk-singing stumbles and flaps about in its pursuit of soul; his call-and-response "uhs" with the backing singers sound like he's receiving repeated blows to the head with a ballpeen hammer. Meanwhile, June, obliviously and incongruously, tears that shit up, her mountain burr sliding into tough-as-nails soul growl.

Bobby Bare Jr. covering the Smiths' "What Difference Does It Make?"

Son of country royalty Bobby Bare Jr. makes outlaw country for indie rock geniuses, or perhaps vice versa. That's nowhere clearer than on this cover of the Smiths' classic from the 2002 "Young Criminals' Starvation League," in which Morrissey's languid Brit jangle rock gets turned into slurred Southern drawl and country twang — shoulder-shrugging ennui for all demographics.

Etta James' "Almost Persuaded" is less about eclecticism than it is about common ground. The song was a 1966 country hit for David Houston. It went on to be something of a country standard, covered by the Statler Brothers, Tammy Wynette and Merle Haggard, among others. But, despite that legacy, "Almost Persuaded" was originally written by Billy Sherrill when he was linked to Muscle Shoals, the integrated Alabama soul studio. James herself recorded it at Muscle Shoals in 1968 for her album "Tell Mama," and, as you'd expect, her version is definitive; not so much a country cover as a declaration that country and soul were always the same to begin with.

Redding's cover of "I Can't Get No Satisfaction" is better known, but listening to this 1966 performance off "Dictionary of Soul," it's hard to figure out why. Backed by Booker T. and the MG's, Redding grabs onto rock with a soul so fierce it's practically metal. Rather than slowing the tempo down to a laid-back pace, he revs it up, so that the McCartney bass line sounds like it's being run through a wind tunnel, if wind tunnels could play that tight. The incentive here must have been at least in part financial, but when Redding throws that "y'all" in there, it sure feels like it's his song.

Marc Ribot covering the Beatles' "While My Guitar Gently Weeps"

On his 1990 debut, "Rootless Cosmopolitans," Ribot took a short pause to vomit on one of the most vacuously self-satisfied numbers in the Beatles' catalog. The guitar here doesn't weep. Instead it stutters, staggers, burps and, not incidentally, sneers at writer George Harrison, original soloist Eric Clapton and anyone who happened to be standing in their general vicinity. As a bonus, Ribot leaves out the lyrics; the absence of "I look at the floor and I see it needs sweeping" improves the song immeasurably.

Steely Dan were never shy about their love of jazz, though usually they focused on lounge rather than swing. This Ellington cover from their 1974 "Pretzel Logic" reaches all the way back to 1927, though, with the electric guitar squawking out in imitation of Bubber Miley's original plunger-muted trumpet. Steely Dan's version inevitably sounds less authentic and heartfelt, but that nicely brings out the honking awkwardness, and indeed the irony, of the original. The Muzak cover works so perfectly, in fact, that it's hard to listen to the original afterward without the strong sense that Ellington was winking at you all along.

A very successful, classically influenced chamber-jazz act in the prewar period, Kirby's band would often play novelty items. This Chopin piece from 1939 is one such; the lyrical, melancholy waltz of the original is replaced with quicksilver swing. Still, the oft-suppressed classical leanings of jazz are underlined; the arrangements and carefully orchestrated group dynamics here are certainly as important as the impishly brisk solos. If you enjoyed this it's also worth checking out Kirby's take on Beethoven and Tchaikovsky.

Avant-garde classical instrumental virtuosos take on avant-garde instrumental virtuoso rock. The Kronos Quartet covered Hendrix on a 1986 album cutely named "Music by Sculthorpe, Salinen, Glass, Nancarrow, Hendrix"  — you sort of feel they chose the title just so they could put that last one on there. The video here is from 2011. Losing Hendrix's swagger makes the song more ominous; hippie groove turned into assaultive droning burnout. The result is oddly more like the Velvet Underground than like Hendrix. No matter the composer, art rock is art rock.

Staple Singers covering Buffalo Springfield's "For What It's Worth"

The Staple Singers' 1967 version changes Stephen Stills' chronicle of woozy hippie dissatisfaction to a harder-edged testament. When Mavis and her siblings tell you to stop, you know you better stop. In the same vein, Pop Staples' chiming blues guitar has so much authority that you feel like Springfield's hesitant version was waiting the whole time for him to show up.

This song seems like a bizarre time capsule now. Remember when hip-hop was political? Remember when punk was? In 1992, post-Reagan, post-Public Enemy, Michael Franti and Rono Tse sample Jello Biafra's original deranged warble from 1979, updating it with references to cuts in education and increases in incarceration — topics now unfortunately not as dated as one might wish. Angry, brainy and weird, the cover's designed to show that where you live and what you're committed to are more important than where your record gets shelved.

You could argue that this is not in fact a cover of a different genre; the Bangles and Alex Chilton's Big Star are both rock, even if the second is an indie rock alternative genius icon and the first is a sold-out slick pop juggernaut. The cover makes the case for both the similarity and the difference;  Big Star's harsh chime is smoothed out beneath the Bangles' sugary harmonies and David Kahne's Wall of Lamination production. Mikki Steele's vocals still sound tough and a little vulnerable inside that cavernous echo, though, reflecting a bittersweet nostalgia for a genre they can't quite recapture.

CCR wore their country influences on their flannel sleeves, and Emmylou has a long romance with the hippie folk end of rock. The meeting of the two is a natural,  with Harris' voice bringing a keening, low-key resigned desperation that (at least for me) trumps Fogerty's gruff hog-calling propensities.  Harris has a fantastic recording of the song on her 1992 "Live at the Ryman" album — a set that includes covers of songs by Bruce Springsteen, the Everly Brothers and Bill Monroe, among others.

Hank Williams as grandfather of mope rock. Chan Marshall's Williams cover (with the title truncated to "Still in Love") appeared on her 1996 album "Myra Lee," and it has to be one of the best things she's ever done. That's not exactly a surprise; few people could write songs the way Hank Williams could write songs, and he gives Marshall an unusually solid foundation on which to build her languid indie angst — which is maybe what inspired her to do a whole album of covers a decade later. You listen to "Still in Love" and it's hard not to feel that everybody should just forget writing new material and cover Hank Williams songs forever. (Al Green's "I'm So Lonesome I Could Cry" is another argument in favor of that plan.)

This 1992 version of Nirvana's grunge teen megahit is either famous or infamous, depending on your viewpoint — Kurt Cobain called it a "great breakfast cereal version." You can see why he was bitter; it's hard to imagine a crueler parody. Nirvana swaggers out all male teen aggression and blaring snottiness, and Amos turns around and treats it as a folk-singing female confessional, with deep breathing even.  Cobain ladles on the ostentatious cynicism, and Amos almost immediately reveals it as maudlin earnestness. That had to hurt.

Speaking of Kurt Cobain and earnestness: Lots of rock dudes covered blues songs, obviously, but grunge, with its roots in alt rock and metal, seemed further afield from those influences than Zeppelin or the Stones. Leadbelly, with his links to the folk revival, is also an unusual touchstone compared to Howlin' Wolf or Robert Johnson. "In the Pines" itself is as much associated with bluegrass and old timey traditions as with blues, per se, and Cobain's trudging vocals and the not-grunge deelectrified MTV Unplugged setting put this almost outside of genre, as if all of American music is a single bleak undifferentiated howl.

Simple evil murder ballad reimagined as towering goth evil murder ballad — from the 1995 album "Murder Ballads," obviously. Cave was born to make the psychic connection between Kurt Weill decadence and grim Americana; that guitar riff sounds like bloody nails scraping across a cabaret.  The video is a work of genius in itself, filled with mannered thin men writhing sensuously to the profane and earthy yammer of senseless violence.

Metallica were well on their way to lumbering self-parody by the time they recorded "Enter Sandman," and Boone's desecration from his 1997 novelty metal album is indisputably superior to the original. In the first place, lounge Pat intoning that we're off to never-never-land is a lot more viscerally terrifying than James Hetfield trying to sell the same line. But more than that, the cover is genius because it's so thoroughly true to the original's trashy prog overarranged melodramatic Vegas essence. For old-school Metallica fans, Boone's "Enter Sandman" is the last, bittersweet masterpiece from a now utterly degraded band.

Antony and the Johnsons covering Beyoncé Knowles' "Crazy in Love"

Antony Hegerty is all about the neo-torch song, combining the vocal oomph and presence of great divas past with dreamy alterna-backing. Covering Beyoncé isn't exactly a change of pace then; more a recognition of her rightful spot in the pantheon beside Billie and Sarah and all the other bigger-than-life greats. The original song gets slowed down and drawn out; the only sign remaining of the jittery funk is the catch in Hegerty's voice at the beginning of each line. Now if only Beyoncé would cover "Hope There's Someone" ...

That Mariah Carey has some of the greatest pipes in pop is widely recognized; that Steve Perry does is less universally discussed, but is true nonetheless. This, then, is a giant wet kiss blown from one titan of bombast to another, their nominal genre differences sunk in the universal solidarity of schmaltz.