The critic talks to Salon about his new book, his approach to fiction and his thoughts on race on TV 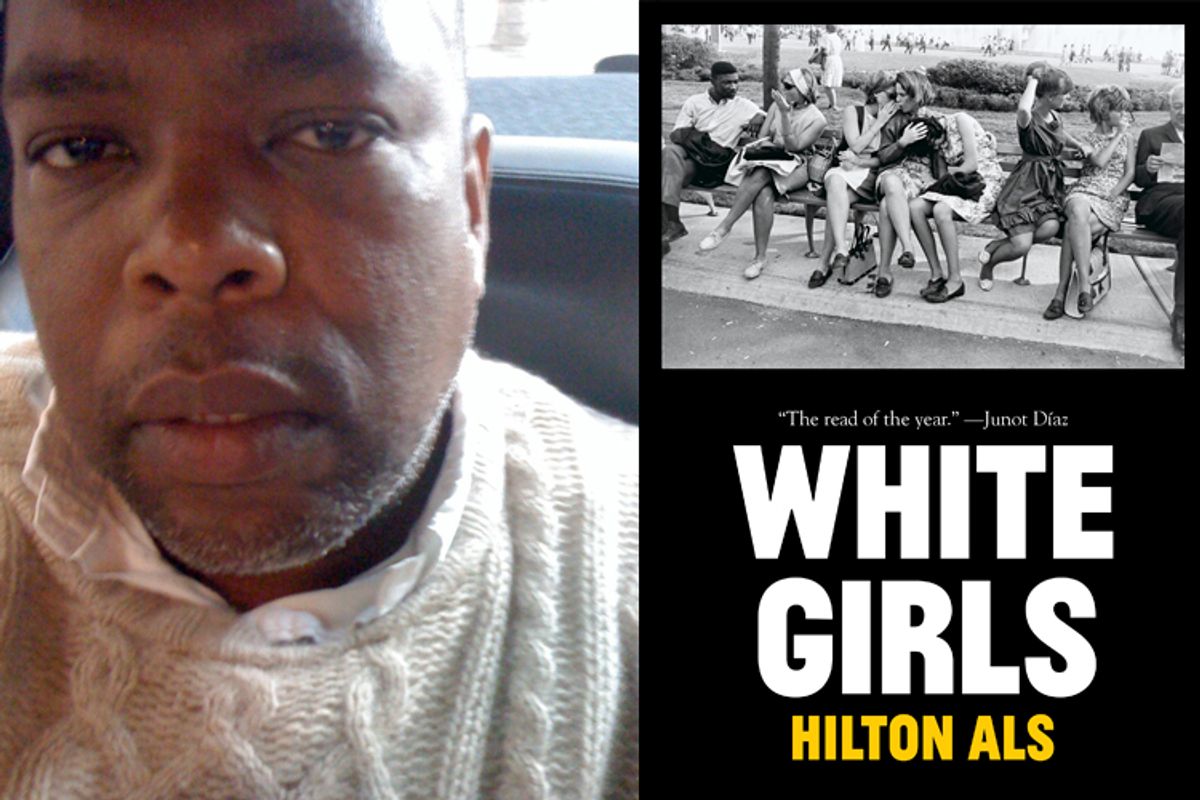 When Hilton Als talks about white girls, he doesn't just mean young Caucasian women. In his new essay collection, "White Girls," the New Yorker theater critic addresses a variety of cultural figures who register to him as white girls. The collection merges memoir (beginning with a lengthy appraisal of a long-term relationship with a straight man over the years) and cultural criticism. Figures addressed include Michael Jackson, Richard Pryor, Eminem -- all of whom merge cultural capital and success, traditionally defined, with the perpetual underdog's self-aggrandizement and an outsized sense of personal drama.

Als's turns of phrase are memorable, but it's his flair and confidence -- fictionalizing Richard Pryor's family and using them as characters, for instance, or, somewhat brutally, representing fashion-world eminence André Leon Talley as a figure who's effectively turned himself into a sanitized stereotype for white enjoyment -- that keep one turning the pages. Like any true critic, Als is able to synthesize information and his own opinion; unlike many, he flits between generic distinctions in order to tell a bigger, broader story about cultural capital, what it means to have it, and how one gets it.

The critic spoke to Salon about the limits of disclosure -- what he will and won't reveal about himself -- as well as the balance he strikes writing about marginalized figures in a magazine read by the elites. He also talks about his favorite current show, "American Horror Story," and anticipates his critics: "if you want to take writing on, you should pay writing the respect it deserves, which is to say, reading it."

I was struck by the way your essays moved from personal to global to, at times, fictional. How did you conceive of these essays while writing them? What genre do they fall into?

Some of those things I just wrote to write them. The fictional piece about Richard Pryor's sister I was writing as part of a book I was trying to write about Richard Pryor. I was trying to make up characters because they seemed more trustworthy than a historical figure I could come up with. One of the things I was hoping for was a cacophony of voices. I wanted to have high, low -- it's more representative of how we feel about each other. People aren't telling the 150 percent truth -- they tell 80 percent. What about the other 20 percent? Quote-unquote the truth is pretty specious. With this book, I wanted to say that as long as you tell the emotional truth, that's what we're really looking at. That's more accurate.

Though it's not in the book, you've written perceptively about the white girls of "Girls," saying "[Lena Dunham] grew up in New York, and you can see it in her clothes and body: no white girl allows herself to look like that if she didn’t admire the rounder shapes, and more complicated stylings, that women of color tend to pursue as their idea of beauty.." Is this book in conversation with "Girls" at all?

The book was worked on long before Lena Dunham was born. I wrote one little thing about her. The book and title was pre-"Girls." There was no discussion.

Tell me about working at The New Yorker, which is often seen as a magazine for people with leisure time and cultural capital, often coded as "whiteness." What is it like for you to work there?

My editor, Deborah Treisman, the fiction editor, one thing she's done that's encouraged me profoundly is encouraging you to be yourself. My self encompasses a lot of different things. I never felt like I had, quote-unquote, to write about black subjects, even though women and other marginalized people are really more attractive to me, I never felt forced to represent. I feel not conflicted -- in fact, really happy -- that there's a place interested in my point of view, which tends to run towards topics dealing with people of color or queerness. And that becomes part of the mix of the magazine.

Do you anticipate criticism about this book? It's far from easy reading -- and seems apt to be misread.

I think people who haven't read the book state that I'm saying Malcolm X is a white girl when in fact I'm talking about his mother. I don't read reviews, but people tell me, apparently there was a mistake in some reviews where the character Mrs. Vreeland was assumed to be the real Mrs. Vreeland [the late Vogue editor Diana Vreeland]. I think that mistakes like that are kind of careless criticism, because if you want to take writing on, you should pay writing the respect it deserves, which is to say, reading it.

Do you think popular art does a good job of dealing with issues of race?

Oh my god, it's getting so much better! Look at something like "American Horror Story: Coven," which is all about, this season, a white woman's envy of black skin. Jessica Lange's character wants to look younger and she's very angry at Angela Bassett's character because her pigmentation means her skin stays younger longer. That's profound. Shows like "Boardwalk Empire," which is the most accurate representation of the spirit of the Harlem Renaissance I've ever seen. Television is doing more than films. I didn't like "12 Years a Slave" because it was playing to the Spielbergian model of redemption. I think that film had four minutes that felt real, and that was Alfre Woodard's scene [in which Woodard's character, a slave who lives with a white man as his wife, explains how she has managed to obtain some freedom by playing by white rules]. That got to the schizophrenia of this country more than the rest of the movie, which aimed for tragedy. We have become more nuanced and complex than films, than a lot of American films certainly.

Historically, the world of entertainment has been a way that black people can get ahead in a world otherwise lacking in parity. Will the diversity in entertainment continue or grow as society slowly grows more equitable?

I had a really good friend who died, and he said he wanted to start a national theater for black musicals. There's something real he was saying about the way black performers have been pigeonholed, but there are other avenues opening up. There's been an enormous amount of change brought about by color-blind casting, and it's my hope that it only gets better with subsequent generations who don't even notice difference. I'm not one of those people who's against all-black productions of Tennessee Williams plays, but there are lot more complex and natural ways to bring people of color into the theater.

I'm interested in your concept of Diana Vreeland-ish glamour, and I'm wondering if anyone on the contemporary scene has that vampishness, in your opinion.

I think people do it more with their style of acting, now, than they do visually. There are really amazing performers who have that amazing style of presentation. You have amazing people like Khandi Alexander [the actress, best known for TV roles including "NewsRadio" and "Treme," and recently seen on "Scandal"], a really great singer named Alice Smith. A really great performer sartorially and otherwise is Helga Davis [a musician]. There are lots of people still bringing it.

Are there elements of your own life you're uncomfortable sharing?

Nah! I don't have anything to lose, really. People have a copyright on their lives. The person I was writing about [in the collection's first, most personal essay], as I was writing it, he was really supportive. I wouldn't have published it if he were upset. Life is short and art is long. I would have just made it fiction.