Literary self-loathing: How Jonathan Franzen, Elizabeth Gilbert and more keep it at bay

Franzen, Elizabeth Gilbert and many more writers on how they deal with their doubts -- and benefit from them 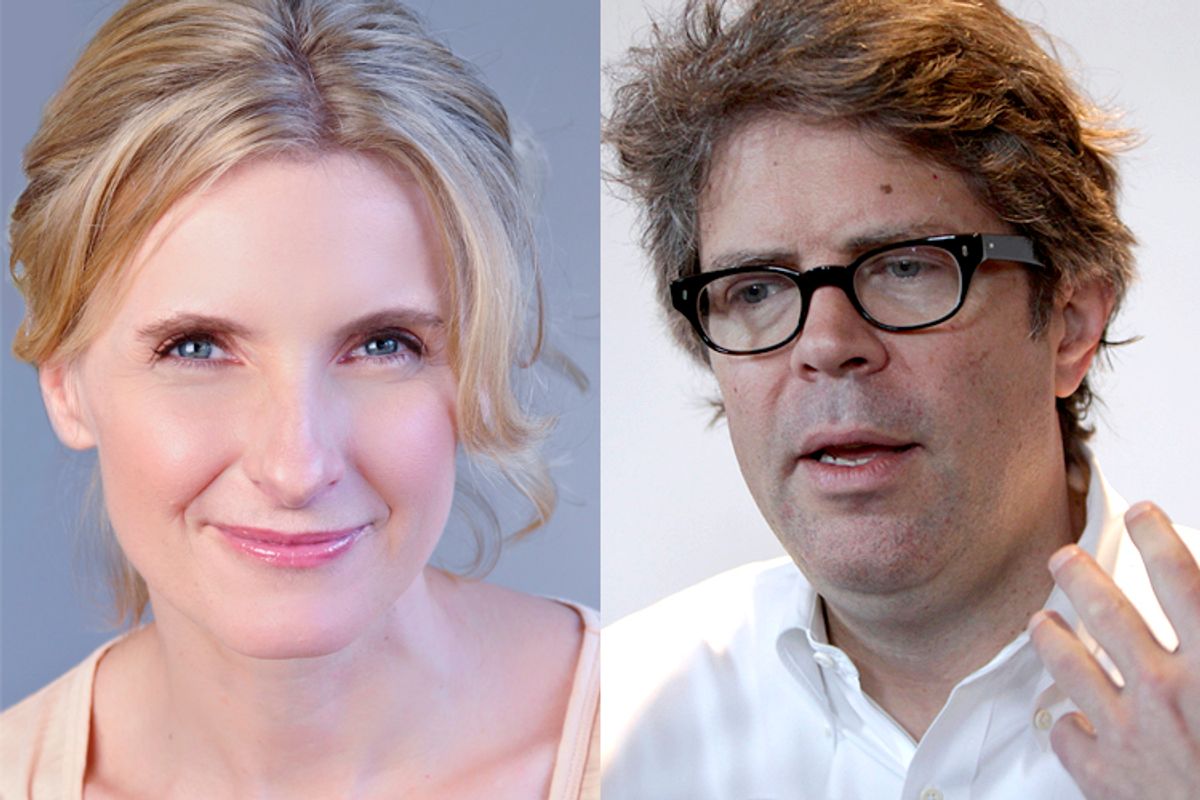 Self-loathing is in the writer's blood. When you’re an artist of any kind, there’s no certainty that what you’re working on won’t be a complete failure. But when writers reach a certain level of fame, when they make Oprah's Book Club or the cover of Time magazine, surely they don’t struggle with the same massive insecurities we lesser known writers face?

The answer, of course, is that it’s human nature to struggle with oneself. That icky feeling of discontent we often experience is what sometimes inspires the best art.

“I experience shame and self-reproach more or less continually,” Jonathan Franzen (author of "Freedom") told me. “The only way to deal with it is to keep trying to immerse myself in the fictional dream and hope that good sentences come out of that.  Once there are good sentences on the page, I can feel a loyalty to them and start following their logic, and take refuge from myself.”

I love the idea of the writer taking refuge from who he is by putting words on the page. Writing, in fact, provides a much needed escape or confrontation with our worst emotions.  It’s just so hard to get to that blissful place where the words are all that matters.

It’s so easy to get caught up in the vicious trap of self-defeat. My bedroom is the most organized when I’m on deadline. Is there anything more uncomfortable than staring at a blank page and knowing that you have to fill it with not only words, but words that matter? It’s far easier to walk away from the laptop, to alphabetize the piles of books on my floor, to call a friend and complain about my lack of productivity, to check Twitter and post an inspirational quote about literature or writing. To declare to your followers that you are writing, even when you’ve only written a few sentences and deleted them. The irony, of course, is that what’s uncomfortable is not writing. And the majority of writers spend many hours of their waking lives not writing — whether they're doing their day jobs or tending to parental duties or just avoiding it. So most of a writer's life is ridden with guilt.

But bestselling author Elizabeth Gilbert (author of "The Signature of All Things") thinks we should be more forgiving as long as we’re committing ourselves to the work.

"I think the question of self-loathing vs. self-confidence is a false choice when it comes to writing,” Gilbert says. “I don't think those are the only two possibilities for How To Be as a writer. (Either blustery or withering, in other words. Both of which are just the opposite ends of extreme narcissism.) I think there are writers who take a quieter approach to their work — one that is just about respectfully showing up for your vocation day after day, steadily doing your best, and letting go of the results. Not going to war against anyone else, or against their talents, or against themselves. George Saunders comes to mind as an example of a particularly generous and gracious genius who is neither self-deprecating nor arrogant. Ann Patchett is another. Michael Chabon is another. Our newest Nobel laureate Alice Munro is yet another. Those are my heroes, for the example they set of healthy working, healthy being.”

The writers Gilbert talks about are all incredible writers, but it’s obviously easier to have self-assurance when you’ve already proven yourself. For writers who aren’t household names, it’s much more difficult to ignore insecurities.

For women writers, it’s 10 times more difficult. Writers like George Eliot and Jane Austen and Virginia Woolf might have paved the way for contemporary female authors, but it's been a long and difficult road -- one that might be getting shorter, but that has its share of bumps and detours and hazardous zones.

Elissa Schappell (“Blueprints for Building Better Girls”) didn’t call herself a writer until Toni Morrison gave her permission to do so:

“When I was in grad school Toni Morrison came to speak to our class. At that point I’d been published in numerous big magazines and was senior editor of the Paris Review. On my tax return under 'occupation' I wrote Writer. But if you asked me what I did I’d say 'I work at a magazine.'

"During her talk she said, 'I don’t know why but men have an easier time calling themselves writers than women do.'

"Then she said, 'If you need permission to call yourself a writer I give you permission.' I started to sob. It was a huge moment for me.”

I can relate. I often talk to fellow writers about how I feel like a fraud when I call myself a writer, mainly because I haven’t finished writing a book. It’s frustrating. I believe in my work, I know I have what it takes, but I also feel pretty doubtful when I live in a world where men continue to dominate the New York Review of Books, where men get more “literary” and “serious” book covers, where several men I’ve talked to say they prefer to read books written by their own gender. So are men actually more confident than women, overall? Not according to Franzen.

“If you’re into sociobiology, you could make the case that young males of the species are less assured of reproductive success and so are driven to be more reckless and single-minded in pursuit of status,” Franzen says. “But I kind of hate sociobiology, and the world of letters is full of counterexamples. Is there an American writer who seems more confident than Joyce Carol Oates?”

The novelist Alexander Chee ("Edinburgh") thinks men might do better at pretending to be confident. “I think what a lot of people think of as male confidence is usually entitlement, believing you deserve something, and that this can function like confidence but it’s just flimsier. Entitlement is unearned … Real confidence comes from basing your self-worth on a tested sense of your abilities, skills and accomplishments, a sense of your inherent worth as a person.”

But what if your tested sense feels like a failure more often than not? There are many days where I block out hours to write and end up writing one paragraph. There are other days where I only have an hour and I write more than I possibly thought I could. I’m friends with (and have dated enough) male writers to know that they have similar experiences. That’s why building confidence requires the determination to push through doubt.

“I’ll say that since I was a kid, surrounded by men, dad and brother -- my biggest influences — and then friends with a lot of guys for years to come, I’ve always tried to beat boys at their game,” Porochista Khakpour, author of “Sons and Other Flammable Objects,” says. “And I feel it in the literary world too. The important thing to realize is the ‘game’ is just that — a game. It’s all game face and false chest-puffing. I think we all struggle with self-loathing. I never feel like I am good enough—I am constantly in competition with some past self or some image of a future self. In that way, there is no room for me to be in competition with others — I’m a big obstacle to myself already.”

I agree that we create obstacles for ourselves, but the historical implications of a patriarchal society are unfortunately still a reality, in many ways. Especially in the literary world.

“Men expect to be published and reviewed and to win awards,” Schappell says. “They assume that their work will be judged on its merits. That their gender is not an issue at all. And it’s not. The only time gender doesn’t figure into evaluating a piece of art is when the artist is a man. A white man. That’s the baseline for comparison. Is the work as good as, worse than, better than similar work by a man? No one thinks to point out gender or race when the author is a white male. So, why shouldn’t they have more confidence?”

Can our self-loathing have an upside? After all, the best art often includes elements of doubt; creativity can be a way to express our uncertainty.

“Every single piece of work I’ve completed — every story, essay, book review, memoir, novel — has begun with despair, which, when it gets bad enough, is closely followed by a flying leap into the void,” Dani Shapiro, author of "Still Writing," says.

The problem is that it’s so easy to fall down when you take that leap. I know the trick is to force yourself to get back up, but sometimes, it’s hard to do that without some kind of boost. Happiness for a writer often lasts for a few fleeting minutes; as soon as you have an essay published or a book out in the world, people are bound to rip it apart. Then one friend gets a book deal before you do; another acquaintance gets a huge advance. If you fall down that path of thinking, you can distract yourself for hours. And we all fall victim from time to time.

“I’m both confident (some would say arrogant, fie on them) and horribly insecure, depending on the situation, the time of day, the weather, and how long it has been since I’ve talked to my mom,” says Rabih Alameddine, author of "The Hakawati."

Sometimes I miss the self-assurance I had as a child — specifically when it came to my imagination. I never thought it was stupid when I invented a game, say, where I was a witch and making a potion out of leaves and grass in the lake behind my house. I didn’t question myself when I wrote ghost stories about the burial ground beneath the lake, or when I played with imaginary friends who came from the woefully uncreatively named “Starworld.”

Then I remember that the doubt and the questioning that I experience constantly as an adult is part of the process. If we all had blind faith in ourselves the world would be full of mediocre books. The ability to question ourselves makes us better writers -- we need to keep ourselves in check.

“I would like to think that all writers whose work I like and admire deal with self-loathing, which is part and parcel of being human," Alameddine says. "It seems natural to me.”