What it's like to wear Victorian corsets and underwear today

Author Sarah A. Chrisman talks about how corsets and pantalettes (Victorian panties) have changed her life 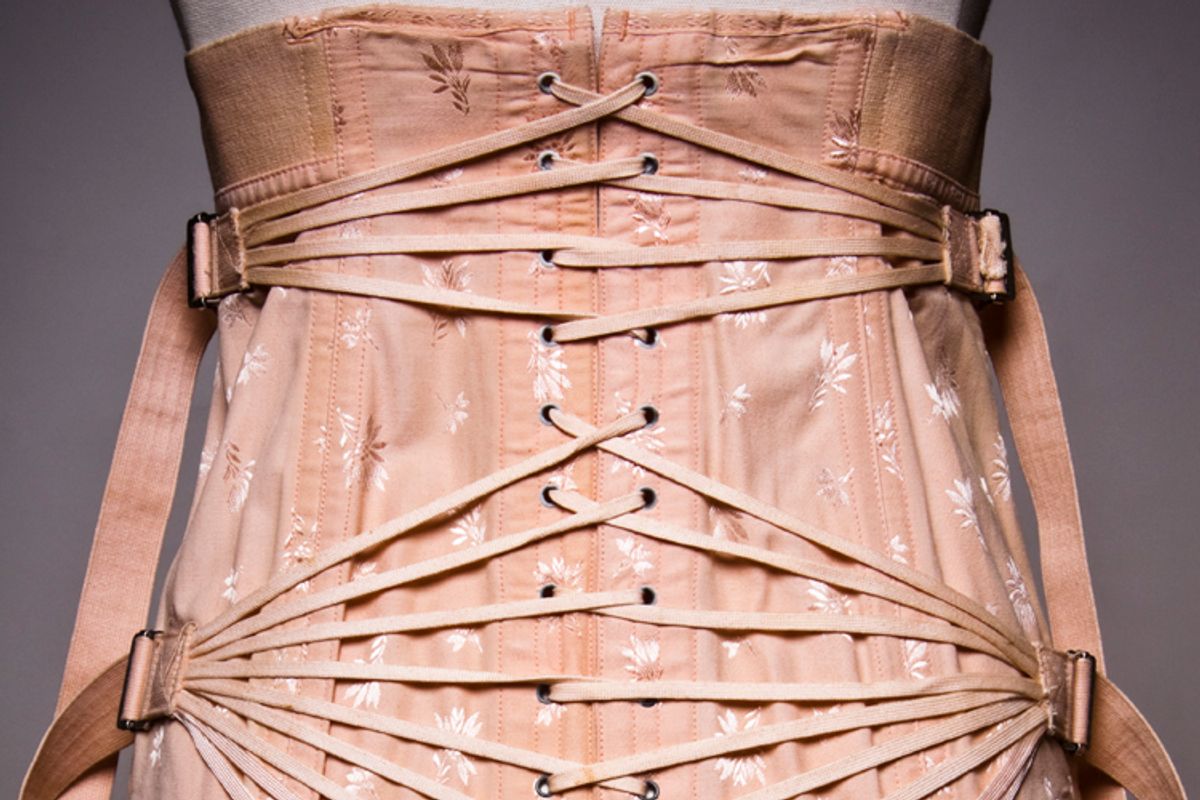 Sarah A. Chrisman readily admits she’d far rather live in Victorian times — specifically 1889 — than the modern era. When her similarly historically-focused husband gave her a corset for her 29th birthday four years ago, she was dismayed, but soon got over her doubts and has since gone on to wear corsets 24/7 and make all her own clothes. Her memoir, "Victorian Secrets: What a Corset Taught Me about the Past, the Present, and Myself," is a paean to both the joys of corset wearing and a feisty defense of a bygone era. Making a concession to modern times, she chatted with Salon via Skype about being publicly groped by Baby Boomers, the physical benefits of corset wearing, advice on buying your first corset and why Victorian women’s underwear is superior.

How long have you had a fascination with Victorian clothing and life?

It goes back as long as I can remember, to be perfectly honest. I can’t remember a time when I wasn’t fascinated with the Victorian era. When I was a child the books I chose to read were ones that took place in the Victorian era or were written then.

What made you decide to wear the corset even though you were skeptical?

Well, it was a gift and at the time I thought, this is a gift, I’ll play along and try it once. But actually once was all it took. It was very enlightening because there are so many stereotypes about how torturous they are, but when I put it on and experienced it for myself, I realized actually it wasn’t as uncomfortable as I’d been told. It wasn’t particularly uncomfortable at all. It was like a new pair of shoes, basically. The more I did research it, the more fascinated I became.

One of the reasons you didn’t want to wear it is you had heard these ideas that it’s dangerous and you might break a rib, which you debunk. Why do you think that idea that corsets are dangerous has persisted?

Even though the nineteenth century feminists like Susan B. Anthony were in fact wearing corsets, I think the twentieth century feminists felt they needed some sort of symbol that they could hold up as a visual aid to demonize. Because corsets had fallen out of fashion, it was a convenient scapegoat. It’s easy to make something foreign into a demon.

In the book, people come up and scold you for wearing a corset. Does that still happen to you?

Is there one type of area where it’s more pronounced?

I get the most negative reactions from women of the Baby Boomer generation. They’re the ones who will come up and actually try to grab me, which I hate.

Are they trying to take it off of you?

They’re just trying to literally put their hands around my waist and feel and grope, which I think is incredibly rude. In Victorian mentality the waist was a very erogenous zone and I can’t imagine anyone walking up to a complete stranger and groping her, yet they feel that they somehow have the right to do this to my waist and I hate it. It’s very invasive.

What advice do you have for someone interested in their first corset?

The first corset should be off the rack because they’re so much cheaper. Also my own experience with corseting was that as soon as I started my waist diminished dramatically. It doesn’t make sense to buy an expensive custom corset and then need another one two months later because that first one has become too large. I recommend Timeless Trends, and the Long Island Staylace Association is a good source of information. I also recommend "The Corset: A Cultural History" by Valerie Steele. I get my custom corsets from C & S Constructions.

How many corsets do you own now and what’s their size?

My corsets are 22 inches measured around the outside of the corset. I have six for wearing and then two underbust ones that are now too big for me. Those were my first ones that I keep for sentimental reasons. I also have two antique corsets which are not for wearing, but I display them when I do educational lectures about corsetry.

How has the corset benefitted you physically?

It definitely helps your posture. It helps with grace of movement because it reminds me to keep my back straight. People started asking me if I was a dancer, which I did not expect at all. I’d always considered myself quite clumsy. I would say I’m a lot more graceful now than before I started wearing the corset.

I want to know more about the pantalettes, the underwear Victorian women wore. You write “women’s liberation had taken a dramatic step backward when we’d given up this equality with the rougher sex.” Why do you think that modern underwear is inferior?

Pantalettes allow one to urinate standing up, because they are split right down the middle. Take camping, for example; there are many situations where it can be very awkward to try to hold garments out of the way when one makes use of trees, shall we say. Also in certain public restrooms one doesn’t necessarily want to sit down.

Do you wear pantalettes now?

Absolutely. Many gynecologists now recommend that women don’t wear modern synthetic fabric panties because they keep so much moisture in that area. Pantalettes allow for more air flow. I just find them a lot more comfortable.

Aside from corsets, what are your three favorite items of Victorian clothing?

Pantalettes are number one. They are very comfortable and very practical. Then petticoats. There’s this very luxuriant feel to petticoats, especially the silk ones. They help keep me warm. I’m very fond of my chatelaine and chatelaine purses. A chatelaine is a little toolkit that clips on. A lot of them would contain sewing tools; my indoor one contains a sewing cushion, a little notepad and a pair of scissors. For outdoors I switch to a chatelaine purse. It’s wonderfully convenient because it leaves my hands free, like a much more stylish version of a fanny pack.

What’s the biggest way your life has changed since you put on that first corset?

It’s really opened my eyes to the difference between what one perceives one can do and what one can actually do.

Before I started wearing a corset I had always viewed the Victorian era as something that I loved the aesthetic of. Seeing the figures of all of the women in the antique photographs, I appreciated their beauty but thought I could never look like them myself.  It was only after I started wearing a corset that I realized, wait a minute, I can look like that and it’s not very hard.