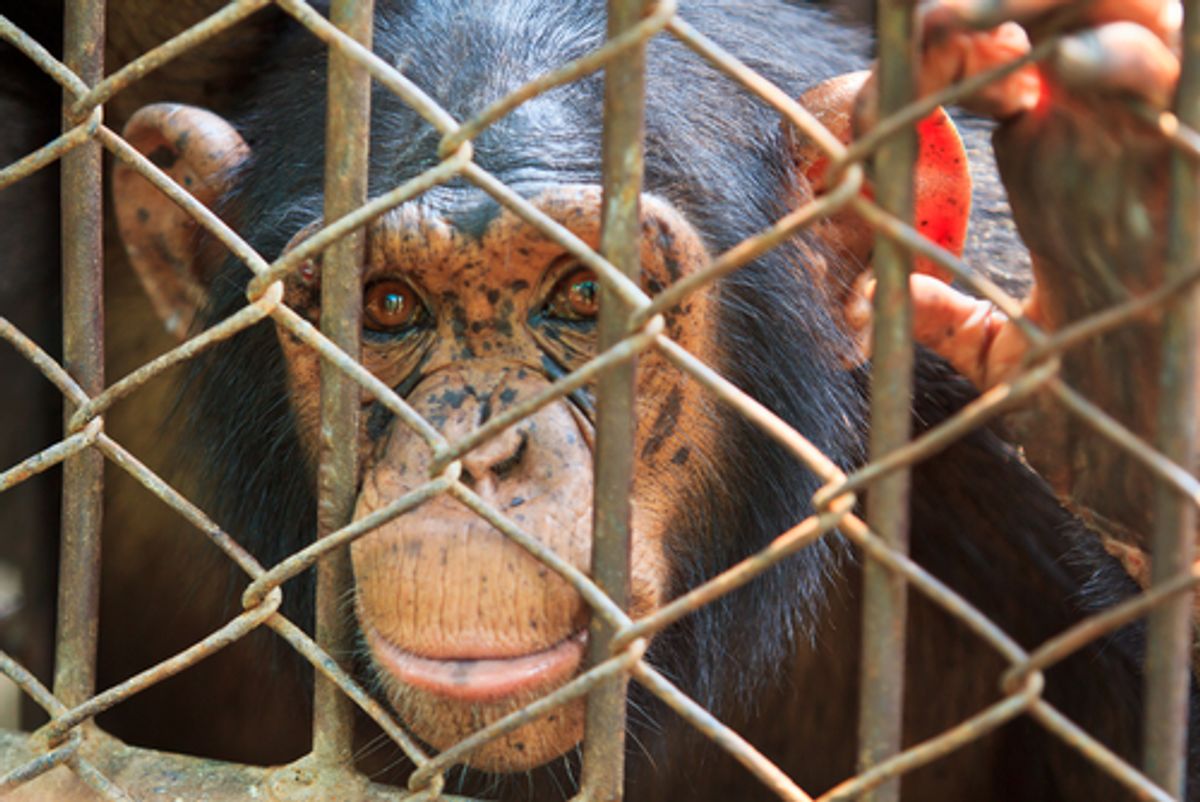 In a set of unprecedented lawsuits against New York, four chimpanzees are suing the state for their freedom.

The animals (with legal help from humans) are seeking to be recognized as legal persons, which would grant them bodily liberty and thus their freedom. From the Huffington Post:

Brought with [lawyer Steven] Wise's group -- the Nonhuman Rights Project, dedicated to advancing legal personhood for animals -- these suits cover what are now believed to be the Empire State's four captive chimpanzees: two who are being used in locomotion studies at SUNY Stony Brook; a former performing chimpanzee now housed near Niagara Falls; and a former film actor, Tommy, who is to be the first plaintiff. Wise states in court filings that Tommy is 26 years old and alleged to be living in "solitary confinement in a small, dank, cement cage in a cavernous dark shed" at a trailer sales business in upstate New York.

In Tommy's suit, filed on Monday against owners Patrick and Diane Lavery and Circle L Trailer Sales, Wise argues that because chimpanzees are "autonomous, self-determined, self-aware, intelligent, and emotionally complex" beings who cognitively "resemble human beings," they must be declared legal persons with rights by the court -- and as such, freed from captivity.

They would not be released to fend for themselves, of course; Wise is asking that the chimpanzees be sent to a primate sanctuary. In fact, what rights beyond being freed from captivity chimpanzees would be accorded, exactly, if they were found to be legal persons is still an open question, Wise said, largely to be determined through future litigation.

"They're not really human rights at that point. They're chimpanzee rights," he said. "What chimpanzee rights are appropriate for chimpanzees? If you're suing, if you're using case law, then it's one case at a time."

The scheme isn't unheard of: Spain and New Zealand have already extended personhood rights to great apes, and several other European countries have banned medical research on them. Without going that far, the U.S. National Institutes of Health announced this summer that it was reducing the number of chimps used for federal research to 50 -- a move applauded at the time by animal rights activists.

"Our goal is, very simply, to breach the legal wall that separates all humans from all nonhuman animals," the Nonhuman Rights Project explained in a blog post. In describing the legal precedent for the case, they use slavery as a natural comparison to the current situation of captive chimpanzees: "New York State recognizes the continuing viability of the common law writ of habeas corpus. New York case law permitted slaves to use the writ to challenge their status as legal things and establish their right to freedom." Therefore, they're arguing, the chimps, as slaves, have the right to do the same. The hurdles they're expecting to face, they say, may end up mimicking the fight to end slavery in the U.S.:

Several states in the south, which considered slaves to be simply chattel, not legal persons, simply barred them altogether from using habeas corpus to challenge their enslavement. (Ultimately, it took almost a full century and then a civil war for the matter to be resolved.) And with rulings of that kind still in place in several states, the Nonhuman Rights Project would likely have a hard time demonstrating that any nonhuman animals are anything but chattel, too.

Our strategy, then, is to file as many suits as we have the funds to be able to pursue, and in the states where we have the best chance of winning them. We will also encourage other animal rights attorneys and legal experts to file similar cases, modeled on the ones that have been successful.

What's right for chimps, of course, could end up being not so good for humans. In an article from earlier this year about nonhuman rights, University of Florida animal psychologist Clive Wynne told the Week: "If we are going to consider closing down AIDS and hepatitis research and giving human rights to chimps, we had better be certain we are not just giving in to a natural but baseless anthropomorphic tendency without solid evidence to back us up."

"Frankly, we're not even sure if we expect to win these first cases," Wise told the Huffington Post. But he's at least hoping to make people take the issue seriously. "I think the legal arguments are so strong, and the facts we're bringing are so powerful, that I think it's going to catalyze a very serious debate. And I think that can only help us."