Forced into a C-section: The latest violation of pregnant women's rights

UPATED: A woman says UK doctors performed a C-section, then put her child up for adoption. 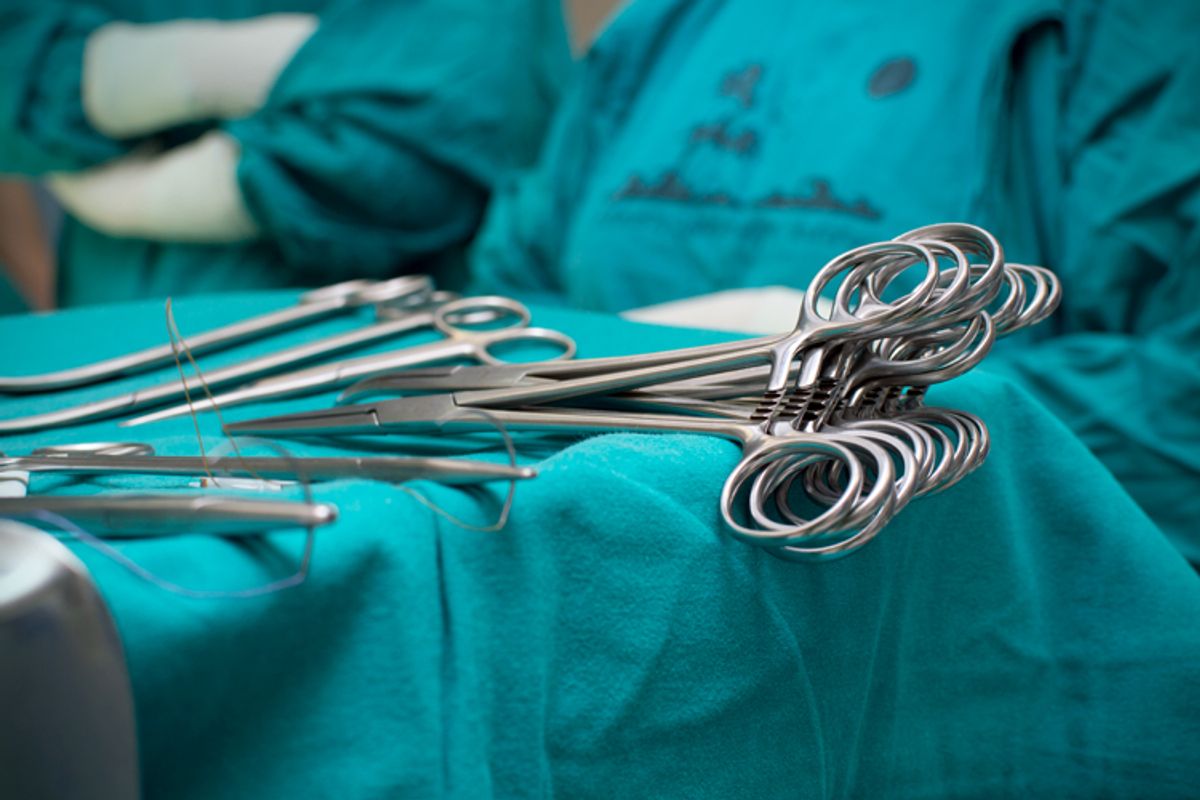 In a surreal case that's lawyers are calling "unprecedented," an Italian woman who was visiting the U.K. last year for work while pregnant with her third child says she wound up undergoing a forced caesarean and had her baby taken away from her. She is currently waging a legal battle to have her returned.

The story, which broke Sunday in the Telegraph, is a harrowing one. The woman, whose family says she is bipolar and needs medication, had "something of a panic attack" in her hotel room, and called the police. After telling her they were taking her to the hospital to "make sure that the baby was OK," she says she was shocked to find herself instead in a psychiatric facility, where she was restrained for several weeks. Eventually, after being told one morning she couldn't have breakfast, she was forcibly sedated and woke up several hours to the news that her baby daughter had been removed by social services. Soon after, she was sent home without her child.

Back home and back on her medication, the woman embarked on a quest to have her baby daughter returned to her. But the Italian court said that "Since she had not protested at the time, she had accepted that the British courts had jurisdiction – even though she had not known what was to be done to her." And a British judge declared that "He could not risk a failure to maintain her medication in the future." The woman's American ex-husband and father of her eldest daughter even tried to plead for the baby to be sent to his sister in Los Angeles, but because the baby isn't a blood relation to her, the court struck that down too.

The woman's lawyer, Brendan Fleming, told the Telegraph, "I have never heard of anything like this in all my 40 years in the job. I can understand if someone is very ill that they may not be able to consent to a medical procedure, but a forced caesarean is unprecedented." And Liberal Democrat M.P. John Hemming, added, "I have seen a number of cases of abuses of people’s rights in the family courts, but this has to be one of the more extreme. It involves the Court of Protection authorizing a caesarean section without the person concerned being made aware of what was proposed."

In fact, while the U.K. case seems unquestionably extreme, the attitudes it speaks to are sadly not unusual. Other mothers have lost custody of their children for refusing caesareans. And in 2007, a woman named Laura Pemberton -- who had planned a home birth after previous C-sections -- was taken by a sheriff while she was in active labor, and delivered to the hospital for a judge-ordered caesarean section. In 2004, a Utah woman was charged with murder when one of her twins died after she refused a caesarean. In the U.S., cesareans are our most common surgical procedure, accounting for one in three births.

But it's not just about C-sections. In 2009, a Florida court ordered a pregnant woman confined to bed rest against her will. This fall, the New York Times reported on the story of Alicia Beltran, who was forcibly sent to a drug treatment program while pregnant because she refused to accept a doctor and social worker's order to start an anti-addiction drug. As the Times said, chillingly, "To her astonishment, the court had already appointed a legal guardian for the fetus." Earlier this year, a Family Court called Sara McKenna, the mother of Olympic skier Bode Miller's young son, "irresponsible" and "reprehensible" for moving to New York to attend school while she was seven months pregnant. It then granted the Californian Miller custody of the child. Last month, a five-judge panel ruled McKenna's rights had been violated, and a new custody hearing is scheduled for next week.

All of these cases – and there are plenty more if you care to go looking – suggest that in the eyes of plenty of medical practitioners and legal experts, women's bodies are mere troublesome baby incubators. Consent? Who needs consent when there's a baby involved? Writing in the Telegraph Monday, solicitor-advocate Sophie Khan argued that "We must not forget that hard decisions need to be made to protect the welfare of the vulnerable." And yes, not every mother is physically or mentally competent, a truth that creates morally challenging ethical issues. But pregnant women are vulnerable too. It should be a no-brainer that surgically removing a baby from her mother's womb without her consent is a grotesque violation of both mother and child, and an abominably crude way of handling a complex issue. And you can't protect children if you obviously don't respect mothers.

UPDATE: A transcript of the Chelmsford County Court ruling from earlier this year gives a more complete picture of the woman's "unhappy" circumstances, including her prior mental health history and hospitalizations. The document would suggest there were serious concerns about the woman's well-being than the Telegraph stories revealed. It also affirms that "Mr Justice Mostyn, who apart from giving various directions in relation to the Local Authority and others, gave permission for the birth by way of caesarean section, and notes that "It appears to me that she was despatched (in deed escorted from the UK with undue haste simply because she wanted to go back to Italy," even though her departure then "diminished substantially" the odds of her child being returned to her.