Maria Bello's great "whatever" coming out 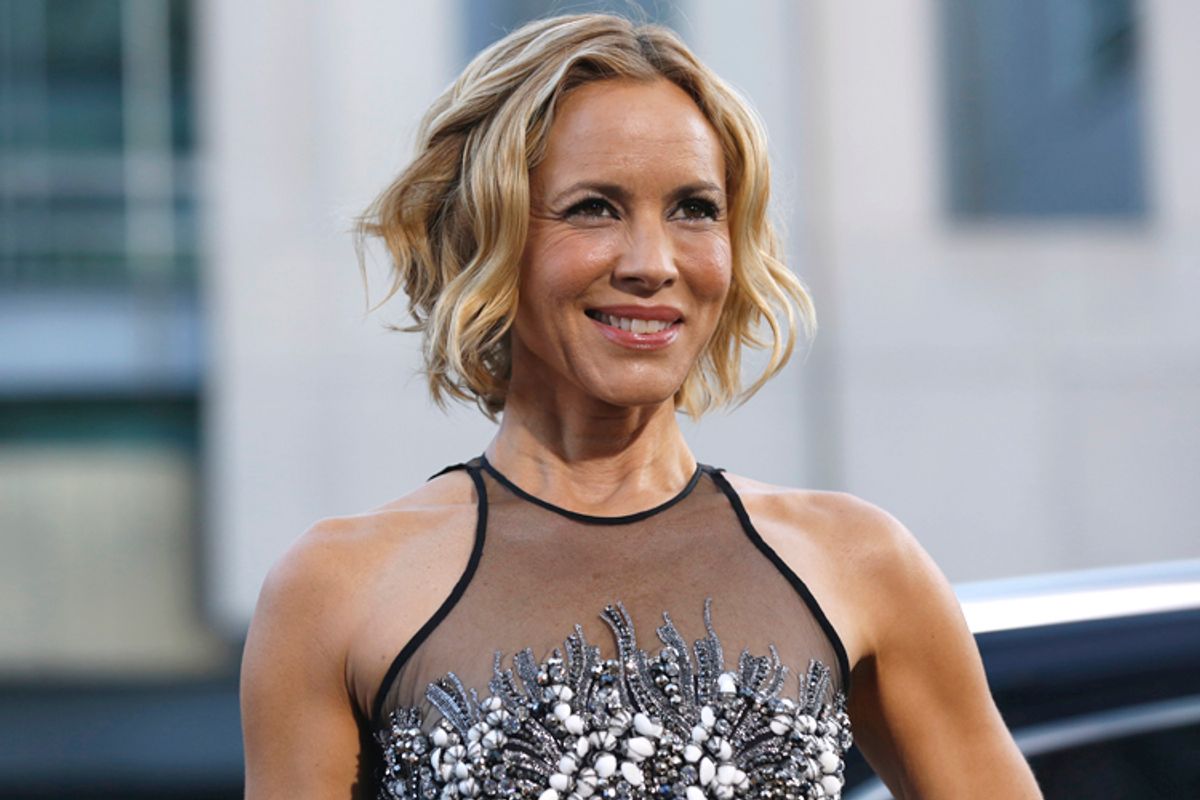 Actress Maria Bello is known for a variety of memorable performances: her flinty detective on the short-lived American version of "Prime Suspect," her scorchingly sexy wife in "A History of Violence." But this weekend, she added another credential to her résumé – as a role model of the happiness that's possible when you listen to your heart.

In a New York Times "Modern Love" column on her "Modern Family," Bello describes telling her 12-year-old son about the "romantic stuff" going on in her life – and her love for Clare, the woman who had been her best friend. Setting the stage for a conversation she says she knew "would have an impact on our lives for a very long time," Bello describes her past with "the handful of men and the one woman I had been in romantic relationships with," and her blossoming realization that Clare, "one of the most beautiful, charming, brilliant and funny people I had ever met," was "the person I like being with the most, the one with whom I am most myself." She recounts sharing the news with her "traditional" parents, who approvingly tell her, "She’s a good girl, good for you," and her son Jack, who reassures her that "Mom, love is love, whatever you are."

Naturally, the tabloids like the Daily News and Us magazine were quick to miss that crucial point, headlining that "Maria Bello comes out as gay." But Bello's coming out is a far more complex one than that. We like to keep people in tidy boxes with neat labels on them: Gay, Straight, Conservative, Religious, Vegan. Fluidity is, in its own way, a harder thing for a lot of people to accept. But the world is full of believers who have questions and Republicans who aren't Tea Party lunatics -- and men and women who love whom they love without a lifetime exclusive preference for one sex. Maybe it makes for less simplistic headlines, but it's a lot more accurate.

In her essay, Bello admits that acknowledging her relationship with Clare might have an impact on her career, and cops to a discomfort with the often awkward word "partner" that might be hard for some to understand. They're valid concerns. Earlier this fall, when Emmy winner Sean Hayes expressed regret that he had spent so many early years of his career being circumspect about his sexuality, he also admitted to getting death threats at the time. The price of honesty can be steep and the backlash can be intense -- as high-profile individuals like Jason Collins and Raven-Symoné have recently learned. Only time will tell what -- if any -- consequences there will be for Bello for simply acknowledging the person she's in love with, a person who happens to be a woman. But it's encouraging that she's done it, and in such a straightforward manner.

In its style, her revelation was similar to that of British Olympic diving medalist Tom Daley, who this weekend also acknowledged his relationship status -- in a YouTube video in which he announced, "In spring this year my life changed massively when I met someone, and they make me feel so happy, so safe and everything just feels great. That someone is a guy." And, he added, "In an ideal world, it shouldn't matter ... Of course I still fancy girls, but right now I'm dating a guy and I couldn't be happier ... Is it a big deal? I don't think so."

Bello's tale isn't the typical narrative of an orientation kept secret for decades, an Ellen-style "Yep, I’m gay." Not everybody is a definitive "Yep" to one thing or another. Bello's story is an acknowledgment that for some, relationships can take many forms. And that's important because her story is not a refutation of her previous relationships; rather it's the very joyful declaration of where she is now, with the person she wants to be with. As she writes, "I would like to consider myself a 'whatever,' as Jackson said. Whomever I love, however I love them, whether they sleep in my bed or not, or whether I do homework with them or share a child with them, 'love is love.'" It's a different kind of coming out, one that recognizes that not everybody fits in one tidy box. It's a lesson that sometimes, when you open your mind and look in your soul, it's possible the person you were meant to be with has been right there beside you all along. And that the "big deal," for people like Bello and Daley, isn't the gender of the person they're happy with; it's the happiness itself.