Thanks for killing the planet, boomers!

The world as we know it is ending, and the indifference by Americans, politicians and mainstream press is maddening 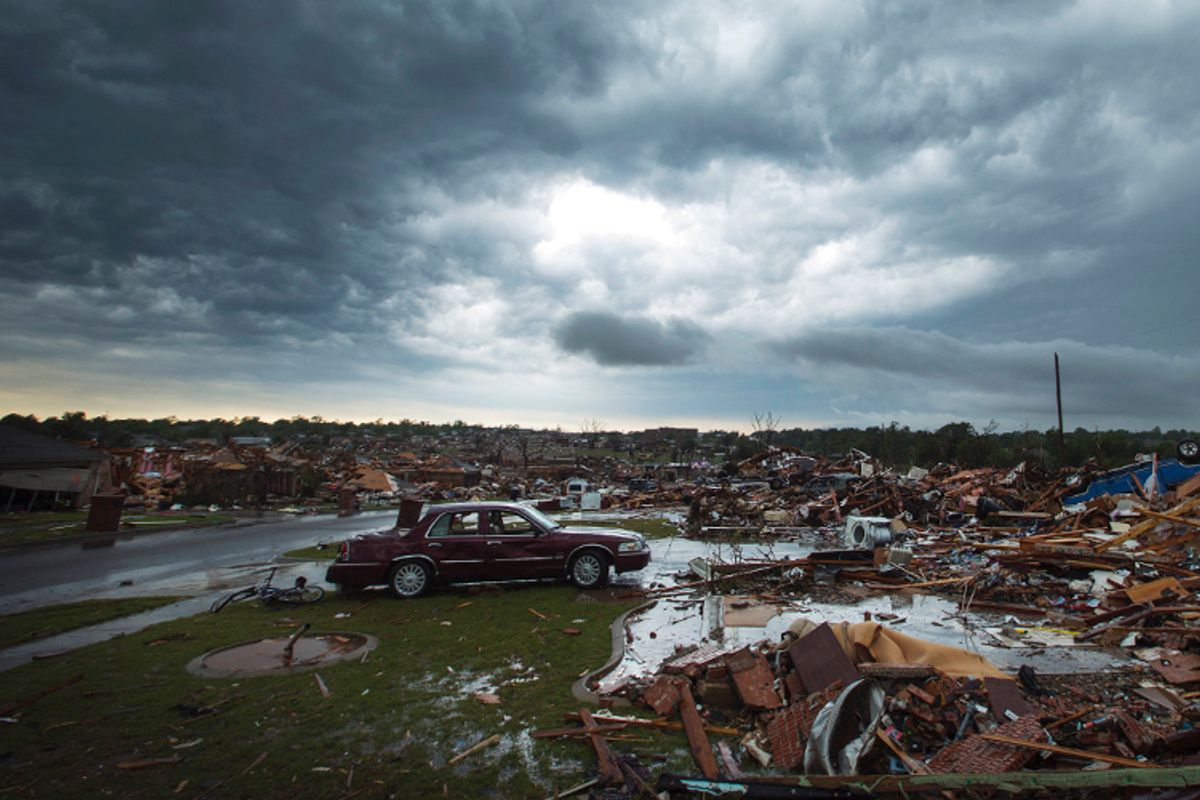 The clouds of a thunderstorm roll over neighborhoods heavily damaged in a tornado in Moore, Okla., May 23, 2013. (Reuters/Lucas Jackson)
--

The strongest hurricane in modern history devastated the Philippines last month, killing tens of thousands and displacing hundreds of thousands more. But you'd hardly know it in places like New York City, where a (mostly) mild autumn trudged on, and few people seemed to have the energy to get upset about another catastrophic natural disaster on the other side of the world. Meanwhile, plenty of people across the Hudson are still struggling to recover from Sandy's devastation.

After two years living under the baking Las Vegas sun, I recently returned to New York. Wearing hats, coats and scarves is something of a novelty, and the streets haven't been bathed in a brown sludge that may or may not have actually been snow at some early phase in its life cycle; driving, horizontal sleet has yet to soak my pants up to my knees. So perhaps it's no surprise I've happily romanticized this beautiful city since returning -- and yet, the joy and excitement that I've experienced exists under a shroud of existential angst, a filter that coats everything in the surreal notion that all these happy memories are passing, subject to what the great Czech author Milan Kundera famously termed "the unbearable lightness of being." It really may be the end of the world as we know it, and I really don't feel fine.

If you're already in your mid-50s or later, and you're lucky enough not to reside in any areas that are traditionally prone to hurricanes or flooding, you'll miss the worst of our imminent destruction. But for those of us who are younger residents of this fragile orb, who hope to live long, healthy, happy lives -- well, tough shit.

Unfortunately, the world as we know it is ending, and no one can reasonably hope to avoid the constellation of catastrophic, ecological and social disasters that are all but certain to manifest, exacerbating one another's horrific, deadly consequences. And yet our politicians can't be bothered to care, a substantial portion of Americans aren't convinced that it's even happening (despite overwhelming, unimpeachable evidence to the contrary), and the enormity of the issue is downplayed basically everywhere outside the bounds of the largely-ghettoized "environmental/green reporting," uniformly marginalized and dismissed by the mainstream press.

It's strange, this deep indifference to the greatest threat the industrialized world has ever faced. Imagine the global response if an asteroid half a mile wide were barreling toward Earth, and scientists were confident that it would strike our planet in 30 or 40 years. Imagine the Gene Roddenberry-esque cooperation and global oneness that would form among Earth's peoples. Unfortunately, an apocalyptic meteor threatening our very existence is a pretty apt analogy for the ecological nightmare we're confronting, except that in this funhouse-mirror version of reality we like to call "the real world," our politicians are sitting on their hands as the asteroid hurtles ever closer.

By the middle of the century, the comfortable, wealthy, relatively-peaceful world as we know it simply won't exist. The consequences of worldwide coastal devastation and the subsequent infrastructure damage from super-storms and storm surges combined with the "death" of the oceans -- with ominous consequences beyond our current predictive capabilities -- will ravage the world, our politics and our peace, preventing even the most insulated peoples and cultures from continuing their fat and happy early-21st-century lifestyles. And unlike every other time such apocalyptic predictions have been levied, these are based on extraordinarily well-researched, peer-reviewed studies and reports from hundreds of the world's most well-respected scientists in their field.

Unfortunately, Americans have gained a cynicism when faced with these sorts of dire predictions, suspicious of any and all claims that the world as we know it might be ending. Between the craziness of the late '90s -- Heaven's Gate, Y2K, David Koresh, etc. -- and the earlier, heavily propagandized warnings of the "Red Threat" and "duck and cover," from the '50s through the '80s, some healthy skepticism about the severity of this crisis by the casual newsreader might be understandable -- even admirable. But it's also completely misguided and dangerous.

Elsewhere, apathy runs rampant. According to an oft-cited research paper by Anthony Leiserowitz, a Gallup poll recently found that "the environment" was the 16th most important issue to Americans today. Even more troubling, among environmental issues, global warming ranked 12 out of 13 -- just lower than "urban sprawl." This apathy exists in spite of poll numbers that show a vast majority of Americans believe in man-made climate change and the requisite dangers that it poses. According to Leiserowitz, since the year 2000 polls have consistently shown that 60-70 percent of people in the U.S. "believe that global warming is real and already underway (74 percent), believe that there is a scientific consensus on the reality of climate change (61 percent), and already view climate change as a somewhat to very serious problem (76 percent)."

Finding real solutions will require global initiatives, and in a world populated by governments that seem incapable of "thinking big," it's hard to imagine our politicians coming together to make the kind of wholesale changes to our society and economic structure necessary to bring global emissions down to a sustainable level. In an article for the New Statesman, journalist, activist and all-around badass Naomi Klein highlights recent research by climate scientists Kevin Anderson and Alice Bows. According to Klein, their "research shows that our entire economic paradigm is a threat to ecological stability." Working for the Tyndall Centre for Climate Change Research, Anderson and Bows have published papers suggesting that industrialized nations need to start cutting emissions by 10 percent annually right now if we want to have a 50/50 chance of staving off the worst effects of global warming. (Decades -- centuries, really -- of indifference make a certain amount of calamity and pain unavoidable, of course.) The only problem is, cuts this large to emissions have no historical precedent. Klein notes that during the Great Depression, the U.S. decreased carbon pollution at a rate of about 10 percent annually, but this was due to catastrophic economic collapse, which should give you a sense of the enormity of the challenges we face going forward.

After decades of delays, discussions and superficial, pro-business "solutions" like a carbon tax credit, we find ourselves in a world where substantively "moving the dial" on climate change's worst effects will be practically impossible. As Klein explains,

climate impacts come not just from what we emit today and tomorrow, but from the cumulative emissions that build up in the atmosphere over time. And [Anderson and Bows] warn that by focusing on targets three and a half decades into the future – rather than on what we can do to cut carbon sharply and immediately – there is a serious risk that we will allow our emissions to continue to soar for years to come, thereby blowing through far too much of our 2° “carbon budget” and putting ourselves in an impossible position later in the century.

And yet in America, the political challenges we face are significantly more ominous than the requisite practical challenges. There is a substantial faction of this country who hold enormous political power relative to their size, and will see every new storm and flood as further evidence against man-made climate change. Liberals hoping for some "Great Awakening" about this issue that might lead to meaningful change should consider a recent survey, reported by Adam Corner at the Guardian:

This will present a major stumbling block for any future attempts at effecting real change through our political process, when every storm is only further evidence of God's wrath. The rampant destruction and misery playing across evangelical voters' TV screens will only confirm their prior notions. Indeed, precisely when evangelical groups started moving toward accepting man-made climate change as a reality, the usual suspects that lead that group around by the nose got to work. According to research by Lee Fang at ThinkProgress,

In late 2005, evangelical leaders like Rick Warren joined a drive to back a major initiative to fight global warming [...] To counter this historic shift in the evangelical community, a group called the “Interfaith Stewardship Alliance” (ISA) was launched to oppose action on carbon emissions and to deny the existence of climate change.

For “stream lining” reasons, ISA relaunched as the Cornwall Alliance in 2006.

The Cornwall Alliance brags in their seminal statement that, "The Cornwall Declaration on Environmental Stewardship" has been "signed by over 1,500 clergy, theologians, policy experts and other people of faith."

And what does their declaration assert? Most notably, "while some environmental concerns are well founded and serious, others are without foundation or greatly exaggerated. [...] Some unfounded or undue concerns include fears of destructive man-made global warming, overpopulation, and rampant species loss."Unsurprisingly, the Cornwall Alliance is funded by the "Committee for a Constructive Tomorrow" (CFACT), an anti-environment front group funded by ExxonMobil, Chevron and other oil interests.

If this were the only political obstacle standing in our way, perhaps there would still be hope: indeed, the flurry of recent success on gay rights initiatives shows that this group's power, while considerable, has its limits. But there's another group, considerably more powerful, and even less inclined to hear about the massive, costly structural changes society will have to undertake to save itself from destruction: the graying rich.

The Great Recession was a massive economic catastrophe for practically all Americans, but some groups suffered worse (and for longer) than others. In the last three years, a number of studies have revealed a substantial intergenerational wealth transfer toward the oldest demographic groups -- a trend that only stands to hasten as baby boomers head into retirement and start leaning heavily on Social Security and Medicare benefits. According to Pew Research:

This is a fairly stunning revelation: Our income inequality is also a generational inequality.

What does any of this have to do with global warming? When an increasing share of our national wealth is held by an aging demographic minority, our national politics are only more likely to tilt away from confronting the "inconvenient truth" of our world's imminent (yet slow moving) destruction. While the AARP spends over $100 million on D.C. lobbyists every year protecting sacred cows like Social Security and Medicare, no comparable institution exists to lobby on behalf of Mmillennials and "Gen Z," the demographic groups that will face global warming's worst consequences. We've been consigned to the sidelines, turned into spectators of the greatest disaster movie ever made. So go ahead: Grab a bag of popcorn and take a seat. The show has just begun.