They're trying to offer all the best parts of church, but without the religion 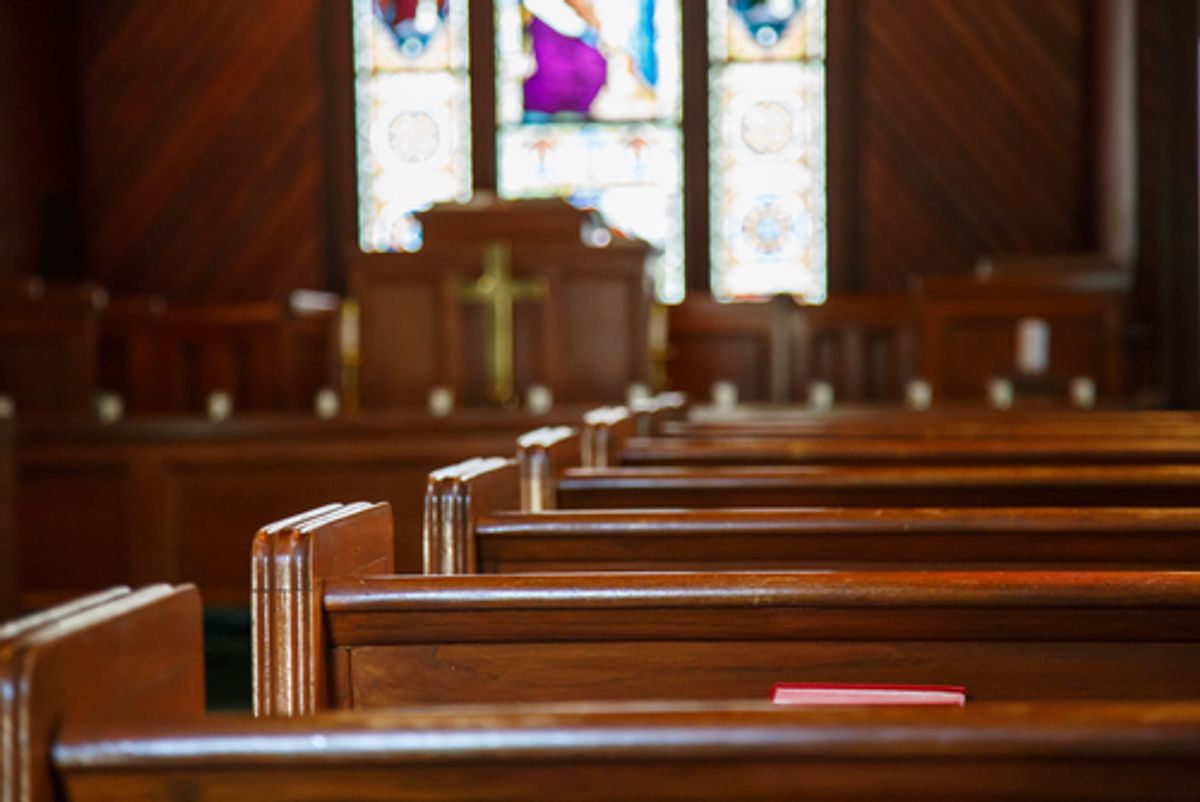 In the last 30 years, atheism and secularism have been booming in America. As many as one in four members of the Millennial generation now say they have no religion. Given the vast size of the Millennials—78 million people, slightly more than the Baby Boomers—that adds up to almost 20 million freethinking Americans. And from all indications, the up-and-coming generations are even more secular.

As the broader atheist community becomes larger and better organized, secularists and freethinkers have shown increasing interest in gathering together with likeminded people. Atheist community isn't a brand-new phenomenon; there have long been local meetups as well as regional and national conventions, like Skepticon, the giant free conference that takes place every year in Springfield, Missouri, or the Reason Rally, the nationwide gathering of atheists and humanists on the National Mall in March 2012. But many of these conferences are focused on activism and political mobilization, and as necessary as those are, they don't appeal to everyone.

That's why, in just the last few months and years, we're witnessing a new wave of secular communities—atheist churches, if you insist—whose focus is on doing good, living well and appreciating the wonder and beauty of the world without recourse to archaic mythology.

The most prominent of these is the Sunday Assembly. Founded in north London in January 2013 by two standup comedians, Pippa Evans and Sanderson Jones, the Sunday Assembly is a godless congregation—all the best parts of church but without the religion, in the words of its founders, whose motto is "Live better. Help often. Wonder more." It was almost immediately a rousing success, attracting hundreds of people, and has spread to other British cities, including Brighton, Bristol and Oxford.

But the Sunday Assembly has much larger ambitions. Its founders helped organize services in New York City over the summer, and recently launched an American "40 Dates and 40 Nights" tour, barnstorming across the country to hold well-attended services in Boston, Washington, D.C., San Jose, San Diego, Los Angeles, and more (even Nashville!), aiming to drum up support for U.S. satellite congregations. Sunday Assembly meetings have also been held in Australia, including in Sydney, Adelaide, and Melbourne.

Though it's attracted the most media attention, the Sunday Assembly isn't the only atheist gathering emerging from this crystallizing secular community. In Houston, Texas, ex-pastor-turned-atheist Mike Aus founded the Houston Oasis, "a community grounded in reason, celebrating the human experience." Its Sunday gatherings host live music from local bands, secular humanist-themed sermons, and community service projects, like blood donation drives. Mesa, Arizona now has a Humanist Community Center, thanks to the Humanist Society of Greater Phoenix, and the Humanist Community of Harvard offers a nontheistic support network for students.

In Canada, there's the Calgary Secular Church, founded by Korey Peters and another local activist. It meets twice a month: once for casual conversation, once for a more structured service that incorporates a humanist liturgy and a presentation from a rotating slate of speakers, on topics like children's rights versus parents' rights, abortion, free will, or even the existence of intelligent alien life. The Sunday meetings include free childcare and a potluck brunch. As Peters says, "For some, our meetings are the only place they are allowed to say they have no faith, and that has proved quite valuable. We provide community as well, so these people now are building fellow non-religious friendships... our main value for atheists is that we are making a world that is safe for them to live in."

Not all of these efforts are brand-new. For instance, there's Ethical Culture, a humanist movement founded in the 1870s by the reformer Felix Adler, focusing on "deeds, not creeds." Ethical Culture Societies still exist today, most concentrated in the New York metropolitan area (including its flagship location in Manhattan), but it can be found in other large cities across the U.S. like Austin, Baltimore, Boston, St. Louis, Philadelphia and Washington, D.C.

There's also Unitarian Universalism, a nontheistic religion that arose in 1961 from the merger of Unitarianism and Universalism, two liberal Christian denominations. But it's evolved beyond its Christian origins to become a truly creedless church. It has no official dogma or statement of faith, just seven foundational principleswhich relate to moral living, not belief. Surveys suggest that a plurality of UUs are atheists (although it must be said that the Unitarian Universalist Association also has at least a few highly placed anti-atheist bigots).

So what happens at these atheist churches? Like atheists themselves, these congregations are freewheeling, diverse and democratic, answering to no higher authority, so it's dangerous to generalize too narrowly. But there are some broad similarities.

Nearly all of them contain some element of moral exhortation and celebration, teaching and preaching about the ethical values that humanists practice. The Sunday Assembly hosts humanist sermons on topics like the value of gratitude, or the importance of wonder. There's also usually music—for the Sunday Assembly, it's classic rock songs with a positive, humanist theme, like "Lean on Me" or "With a Little Help From My Friends," that the audience is invited to sing and clap along to. A.J. Johnson, one of the main organizers and sponsors of the NYC Sunday Assembly, calls it "a radically inclusive, family-friendly celebration of life. We sing positive, popular songs, like 'Help!' by the Beatles. We listen to short, interesting talks. We meet new people." Most of them also organize community service and outreach projects.

The bigger question that needs to be answered—and the question that inevitably gets asked whenever these groups are discussed—is, why do atheists need these gatherings? Are they just a needless, misguided counterfeit of religion? Is it the case that "churches and ritualized worship... are best left to the people who feel the need to have a God figure in their lives"? Should nonbelievers be organized solely for "the purpose of repelling religious infringements on secular society" and nothing else?

The best answer to this is that the needs these congregations aim to fulfill aren't religious, but human. I grant that the term "atheist church" sounds clunky and self-contradictory, because these areas of human interaction have historically been claimed by religion and our language doesn't have good non-religious words for them.

But whether atheist or theist, all human beings benefit from belonging to a welcoming, supportive community. Through congregations like this, we can help each other in times of need or crisis: when someone dies, we can gather to comfort the mourners and share memories of their life. We can come together to celebrate important life passages: for non-religious people who want to get married, for example, we can offer a humanist celebrant to solemnize the wedding. We can also assemble to do good in the wider community, with charitable drives and volunteering (particularly important since religious organizations have a nasty habit of turning away atheists who want to help). Research has repeatedly affirmed the benefits of social connection, showing thatbelonging to a community contributes to leading longer, healthier, happier lives.

All this goes double for nonbelievers living in heavily religious communities. In places where there are few opportunities for friendship and social gathering outside a church, life as an atheist can be lonely and isolating. Nonreligious congregations restore this balance by offering a place where we can speak our minds freely, where we can find friends who think as we do, and where we can have invigorating conversations that don't have to begin by knocking down the same infuriating stereotypes every time. For all the benefits of online discussion, a merely virtual community can never fully substitute for that kind of joyous human contact and connection.

Besides the immediate tangible benefits, we also gather to affirm a common identity. In a society that's still majority religious, nonbelievers are frequently the targets of prejudice and misunderstanding (as in the story of the soup kitchen that turned away atheist volunteers). By organizing and becoming visible, we show the world who we are and what we value, and that's always the first step in fighting this kind of bigotry. It creates a positive and welcoming image of atheism that people will bear in mind when religious fundamentalists try to paint us with negative stereotypes about how we lack morals.

As A.J. Johnson says, "I think the greatest value of Sunday Assembly is its appeal to people who may not call themselves atheists. Less than 3% of the population identifies as 'atheists.' However, about 14% of the population says 'Nothing in Particular.' This group is not being served by the current options. Helping these folks find a sense of 'belonging' should be an important goal for the entire nontheistic community, including self-identified atheists, agnostics and Nones. Their acceptance helps fuels our own."

Personal experience bears this out. I've been to several of the New York City Sunday Assemblies, and they've all drawn a young, diverse crowd—parents and families, people of color, an almost equal mix of men and women, a broad spread of ages—that's very different from the bunch-of-crotchety-old-white-guys image that's often (and not always inaccurately) thought to be typical of atheism. It's clear that communities like this attract people who have little interest in atheist activism in the strictly political sense, people who just want to get on with their lives and live according to humanist values. As the numbers of nonreligious Americans continue to grow, we can be sure that these secular congregations will grow with them.