Gwyneth Paltrow and her trainer make a tone-deaf lifestyle series

The actress wants you to restart your life! 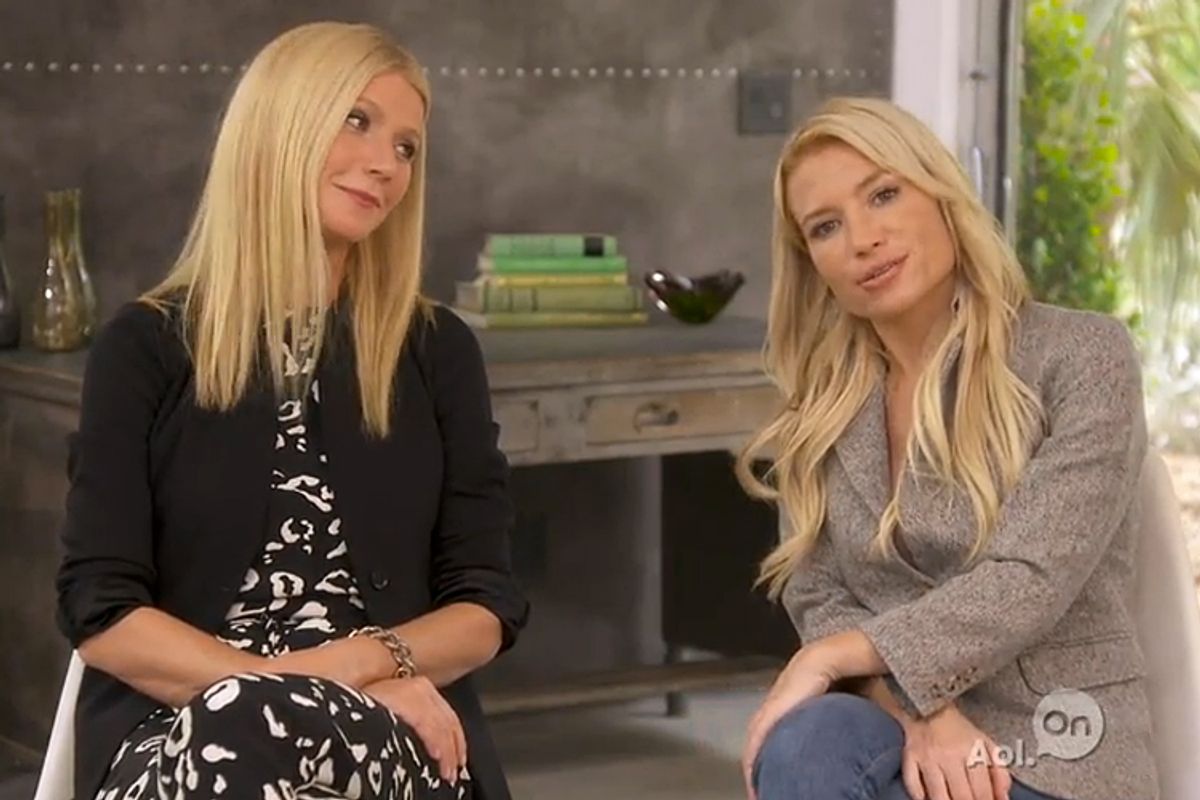 If any two people would know about starting over, it'd be Gwyneth Paltrow and Tracy Anderson.

The former is an actress who revamped her career after years wandering in the post-Oscar wilderness; apart from gigs in Marvel movies, Paltrow is by now far better known for her cookbooks and her lifestyle newsletter, Goop, than she is for her onscreen roles. Her food and lifestyle writing is so closely associated with unattainable luxury (she advocates a $1200 napkin set, for instance) that she's become a nearly universally loathed figure, one who's always in the press and whose mysterious upcoming Vanity Fair "takedown" profile has been an object of speculation for months. Anderson, Paltrow's trainer, has glided over critiques of her unsafe 800 calorie-per-day diet and reporting of her shady business practices and outstanding debts to become an expert who gives interviews on Paltrow's derriere and who sells diet plans online. (Deals start at $49.95 a day!)

It's only natural that these two artists of reinvention would help empower others to start over, too. And so it was that Paltrow and Anderson joined up with AOL (itself a brand that's been through many unsuccessful iterations) to produce a series called "The Restart Project." "We're inspired by women who have restarted their lives using health and fitness," Paltrow intones in the show's trailer.

The series is one to eagerly await, it would seem, primarily for the spectacle of Paltrow attempting empathy with middle-class women. She's a great actress and she's certainly entitled to live her life however she wants, but Paltrow's attempts to extrapolate from her chic existence lessons for the average person have always rung a bit false. Enlisting her expensive trainer in order to help remake acolytes' lives bears a whiff of old, outdated programs like "Queen for a Day," when TV crews would sweep in and bestow gifts upon the lessers.

Paltrow's path back to the center of the culture via aspirational tips has been followed by other stars, like "Gossip Girl" star Blake Lively, who's planning a lifestyle brand and has already been giving braggy interviews about how she doesn't diet. She, like Paltrow, has the answers; she is not merely a screen idol but a role model.

Say this for Paltrow -- she's strongly leaning into the public critiques of her. She comes in for mockery, again and again, for the appearance of believing she has all the answers. And so she makes a web series about how she helps women to restart their lives, which both her fans and her detractors may well sample. Anderson's involvement, too, makes sense -- she's clearly not a person who's bothered by criticism!

It's not that Paltrow's goals are off-base -- who wouldn't like to devote inordinate amounts of time and money to working out with a trainer and cooking healthful, organic meals?  If people aren't steaming veggies nightly after a refreshing workout and some fun luxe shopping, it's not, or not solely, because the thought didn't occur to them.