"Agents of S.H.I.E.L.D." and "Almost Human" have to make tech both cool and believable. They don't always succeed 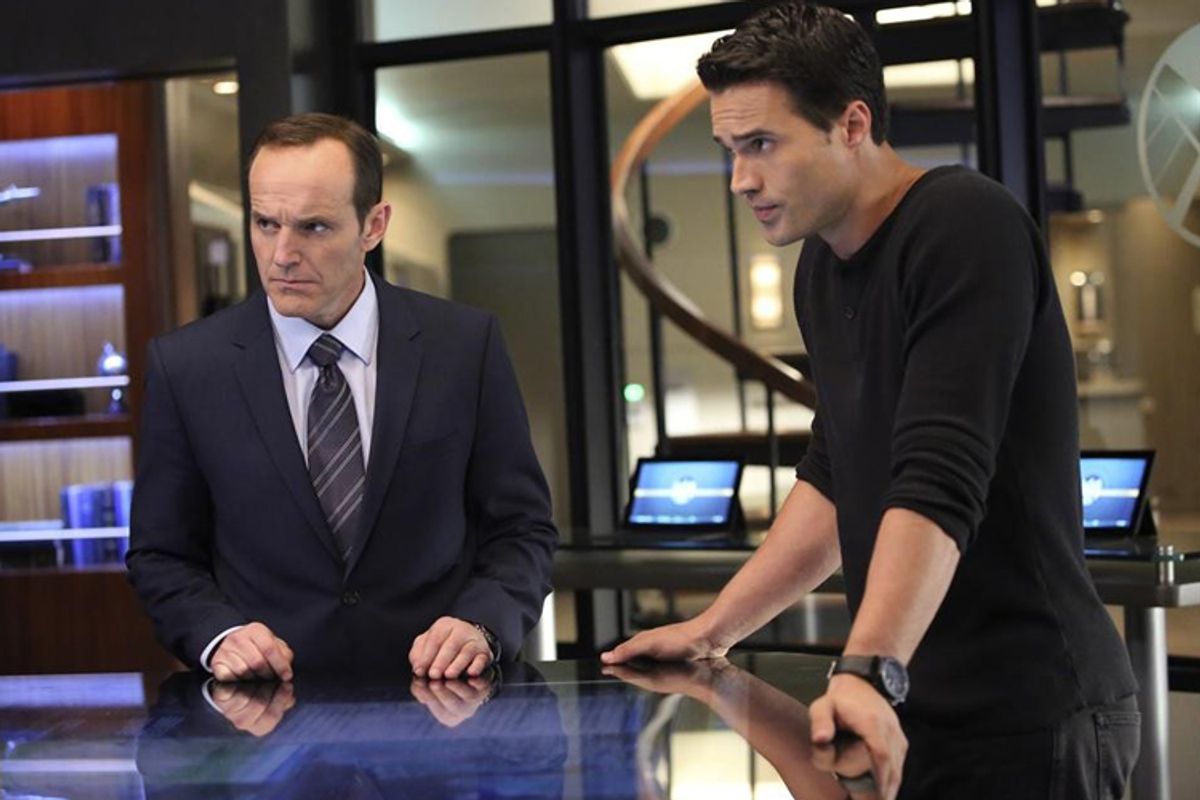 On last week's episode of "Agents of S.H.I.E.L.D.," egghead S.H.I.E.L.D. operatives Leo Fitz and Jemma Simmons used a holographic user interface like those manipulated by Tony Stark in the "Iron Man" films to dissect and analyze a damaged particle accelerator. Wide-eyed agent-in-training Skye gazed with delight at the glowing, spinning, cyan display until she could no longer help herself. Finally, she reached up and plucked a segment from the impressive 3-D schematic and was immediately rebuffed in Fitz's thick, Scottish accent.

"No, you do not get to touch that!" the young scientist snapped, slapping the virtual cog from Skye's very real hands. "Two semesters minimum of holographic engineering before you get to touch this!" Ego bruised and whimsy shattered, Skye retreated to the meager solace of everyday technology. "I'm going to go upstairs," she replied, pouting with perfectly glossed lips, "I'm going to do my own research on my own computer. My boring, old, flat computer."

You can't blame her for marveling -- pun intended -- at the floating display. Who hasn't pined for a holographic computer interface since Tom Cruise played the hammy virtuoso in 2002's "Minority Report"? These days, prime-time television is buzzing with dazzling blue sky technology that can appear all the more plausible when punctuated by commercials for wireless phones, remote automated home security systems, "Samsung gadgets that can read each other's minds" (available at Wal-Mart), and a host of wholly attainable doodads.

"Agents of S.H.I.E.L.D." takes place essentially in our times. And therefore, despite the occasional incorporation of outlandishly powerful alien artifacts, it's easier for the show's creators to forecast believable advances in technology. Turns out that Fitz's holographic answer to CAD is not so fantastical after all. Click here to see a real-life Tony Stark working on the prototype.

The further into the future one sets a drama, however, the more difficult it seems to be to foretell a cohesive and acceptable technological environment. Fox's "Almost Human," for example, kicks off each edition with an ominous prologue: "The year is 2048. Evolving technologies can no longer be regulated …" Indeed, last night's episode alone featured a highly addictive street-level drug manufactured from algae, a subcutaneous recording device implanted in the belly of an undercover police officer, and a drinkable substance that transforms a man's "whole body into an undetectable GPS and tracking beacon for same-platform technologies."

Despite all these wondrous advances with their equally sinister applications, one detective on the show is still seen mocking up a fellow cop's fake ID on an unwieldy tablet-y thing that's bulkier and less ergonomically sound than the mercilessly sleek MacBook Air on which I now write this article. (My personal favorite gadget from the same episode is the holographic police tape that identifies each officer as they pass through. See if Sharper Image doesn't get that one before your local precinct.)

Then there is the matter of the show's presumably most interesting character, the android Dorian. I had hoped this self-aware machine might reveal more about the notion of sentience and, perhaps, challenge the viewer's ideas about what it means to be alive. Dorian, however, does not come across so much as a new life form struggling to find its place among humanity as he does the nicest, most peaceful, most rational dude you'll ever meet. He's kind, helpful and humble. He smiles at the right moments, makes awesome suggestions, and even knows how and when to give his surly partner a good-natured ribbing.

My issue here is not exactly with the veracity of the character. In the first episode of "Almost Human," someone warned that Dorian was decommissioned because his line of android, the DRN models, were somehow emotionally unstable. So far, though, we have not witnessed any real signs of that instability. From what I can tell, Dorian is slightly less temperamental than my Xbox.

It stands to reason, then, that, in 2048, when half of the entire police force consists of high-functioning artificially intelligent androids, shouldn't artificial intelligence be a much larger part of the technological landscape? I'd imagine we'd trust a less dangerously tasked bot, like a wily blender or a clever, resourceful toolshed, before we'd trust a synthetic beat cop with a gun on his waist. Yet, only the cops and the sex workers from Episode 2 seem to possess actual AI. Other than the proliferation of androids, "Almost Human's" future feels only superficially different from our right now. Maybe I'm being too picky, but I feel like either Dorian is too advanced for 2048, or, come the mid-century, we've put all our good ideas into keeping algae off the streets. Scary thought.