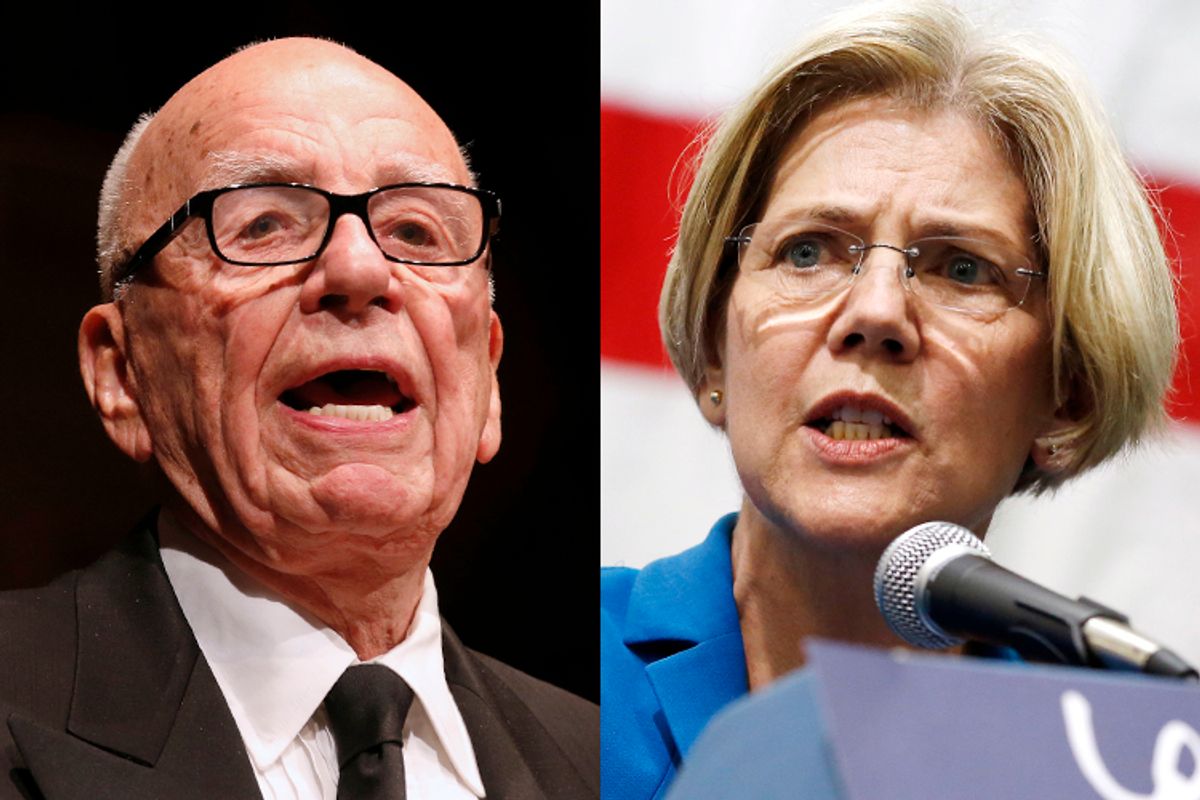 In a new Op-Ed for the Wall Street Journal, Jon Cowan and Jim Kessler of the Third Way think tank warn that Democrats will only win if they ignore the recent success of Mayor Bill de Blasio and Sen. Elizabeth Warren and reject “economic populism.” Their argument is not convincing but, surprising no one, establishment centrists like Mike Allen of Politico and Ron Fournier of National Journal loved the piece. Allen even went so far as to categorize it as a game changer (which evidently sent a thrill up the leg of whoever runs Third Way’s Twitter account). But for those of us who don’t already wish to see Social Security and Medicare benefits cut, Third Way’s piece was little more than a reminder of the selfishness (and increasing irrelevance) of the economically plutocratic wing of the Democratic Party.

Third Way’s argument is basically two parts. The first is the unobjectionable assertion that Bill de Blasio and Elizabeth Warren’s “economic populism” has succeeded in no small part because they represent liberal electorates. Cowan and Kessler note that New York City hasn’t had a mayor subsequently achieve higher office since 1869, while Massachusetts hasn’t sent anyone to the White House since 1960. This strikes me as something of a non sequitur — no one of consequence that I know of has argued that Warren is a shoo-in for the presidency in 2016 — but the essential point, that much of America isn’t as liberal as its most liberal areas, is true in a “duh” kind of way.

The second plank of Third Way’s argument is that the recent failure of a referendum in Colorado, which sought to raise taxes in order to fund an overhaul of the state’s educational system, proves that “economic populism” is a “dead end” in those parts of America that aren’t already true blue. “On the same day that Bill de Blasio won in New York City,” they write, “a referendum to raise taxes on high-income Coloradans to fund public education and universal pre-K failed in a landslide.” On its face, this looks like a pretty convincing argument. Colorado is, after all, the consummate purple state. But as Markos Moulitsas points out, Third Way is rather egregiously misrepresenting the referendum here. It didn’t simply raise taxes “on high income Coloradans” — it raised taxes on all Coloradans. That’s a big, big difference.

In between the non sequitur half of the argument and the wildly misleading half of the argument, Third Way unleashes a torrent of numbers intended to convince the reader that cuts to Social Security and Medicare are needed, like, yesterday. On Social Security, especially, Third Way strains to impart the fear of God to its readers, describing an imbalance between payroll tax collections and Social Security benefits as one that threatens to “devour” the entire Social Security Trust Fund … in 2031. Third Way doesn’t come right out and say that cuts are the only solution to the problem, but its pooh-poohing of Warren’s proposal to lift the cap on payroll taxes implies as much. Perhaps most disappointingly, coming from a nominally Dem-aligned think tank, Third Way adopts conservative generational warfare framing in describing Warren’s plan, which it calls “a $750 billion tax hike … that hits mostly Millennials and Gen Xers.”

That’s not the only instance of Third Way describing higher taxes in the same way as Grover Norquist might, however. In its dismissal of economic populism, Third Way describes the raising of taxes on the wealthy as “forc[ing] the wealthy to pay higher taxes.” In an era of skyrocketing inequality, this strikes many observers as an eminently reasonable course. But for Third Way, redistribution is a four-letter word. When you take a look at Third Way's Wall Street-heavy board of trustees, this begins to make a lot of sense. In an era of economic populism, these are the people who will be "forced" to pay higher taxes. It's understandable — if not admirable — that Third Way would advocate for other possible solutions. But why Democrats should listen to Third Way, that's another matter. To be blunt: They shouldn't.