A "discussion" of stereotypes turns into a display of them 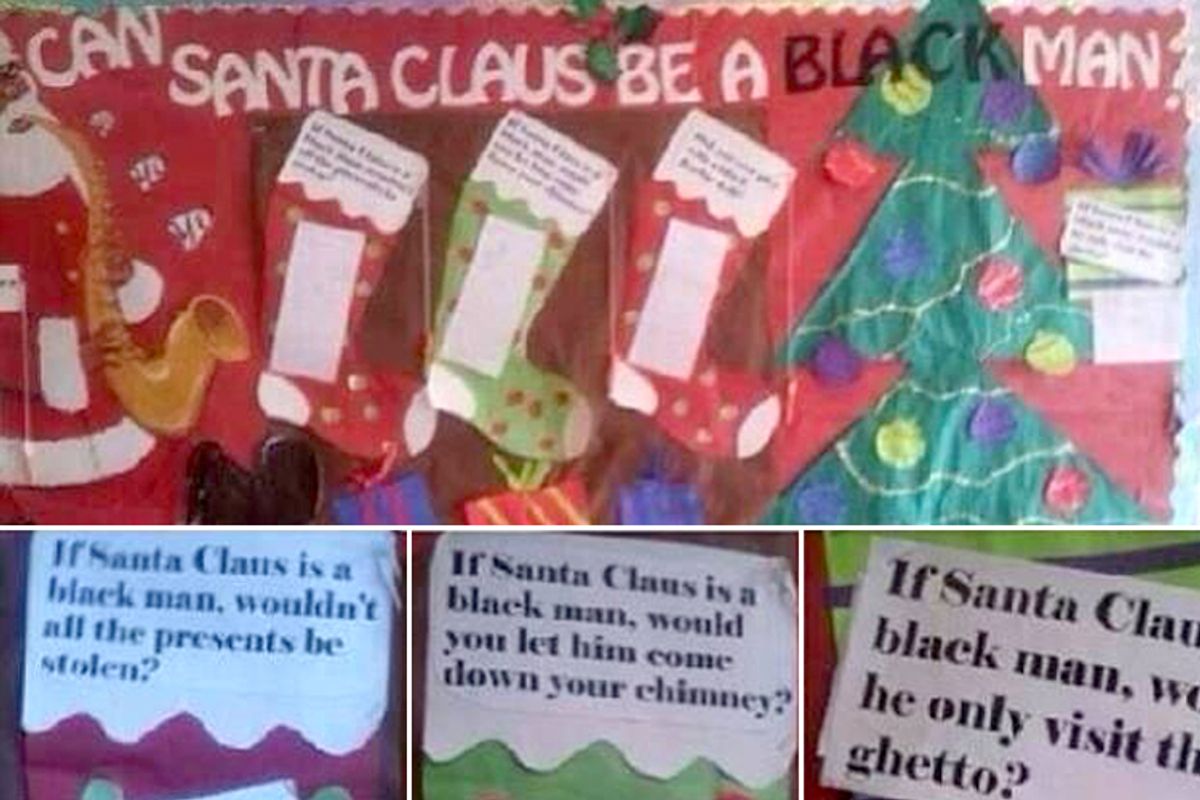 And you thought racist idiocy was just for Halloween. Ho ho ho! Guess again! Just in time for the holidays, Indiana University is backing off a dormitory's "diversity program" display that recently asked, "Can Santa Claus be a black man?"

A university spokesman told WTHR Monday that the Christmas-themed board, which featured Kris Kringle as a dark-skinned sax player, was intended to "raise awareness and promote discussion on issues such as race, gender and sexual identity." But the problem wasn't so much Santa himself. It was questions, written at the top of paper stockings, such as "If Santa is a black man, would you let him come down your chimney?" and "If Santa Claus is a black man, wouldn't he only visit the ghetto?" Students were encouraged to write their responses below.

In a statement Monday, the university's associate vice president of public affairs, Mark Land, said, "The aim of this was to start a discussion around racial stereotypes, and while the intent was good the execution was misguided. This program has a good record of fostering debate among students on important issues, but this effort missed the mark. (We) apologize if the images offended anyone - that clearly wasn't the intent." Yeah, maybe a bulletin board asking, "If Santa Claus is a black man, wouldn't all the presents be stolen?" might be considered a tad "misguided."

The board was taken down earlier this week, after students complained both on social media and to school administration. Via Twitter, the university said, "The sign is being removed. The intention was to educate, not offend, but we recognize the problem and apologize to everyone effected." (sic)

It's possible the creators of the board were going for something deliberately provocative and in-your-face – the Quad's staff have so far declined comment. There is a valid conversation to be had about what happens when children are brought up with an ideal image of goodness and generosity as having a light face. (See, for instance, the famed experiment of a few years back in which African-American children expressed a clear preference for white dolls over dark ones, declaring them the "nice" ones.) But much like the University of Michigan's recent ill-advised attempt at a fraternity "Hood Ratchet Thursday" party, the final result instead reeked of the ignorance of privilege. Without context or nuance, it seemed not to challenge stereotypes – like the idea that older black men are jazz musicians or that skin color is an indicator of criminality -- but instead just state them outright.

It seems conceivable the "black Santa" was a poorly executed student endeavor, carried out by individuals with vague good intentions but no real sense of how to ask the right questions, let alone answer them. The fact that they were challenged, and strongly, on this says that in its own circuitous way, the board accomplished something. It told the students who were justifiably horrified that they have a voice. As one student told WTHR, "It really hurt." And it may have taught its creators to try a little harder and dig a little deeper when considering their topics and how they frame them. And that's a valuable gift, one you won't find under any tree.