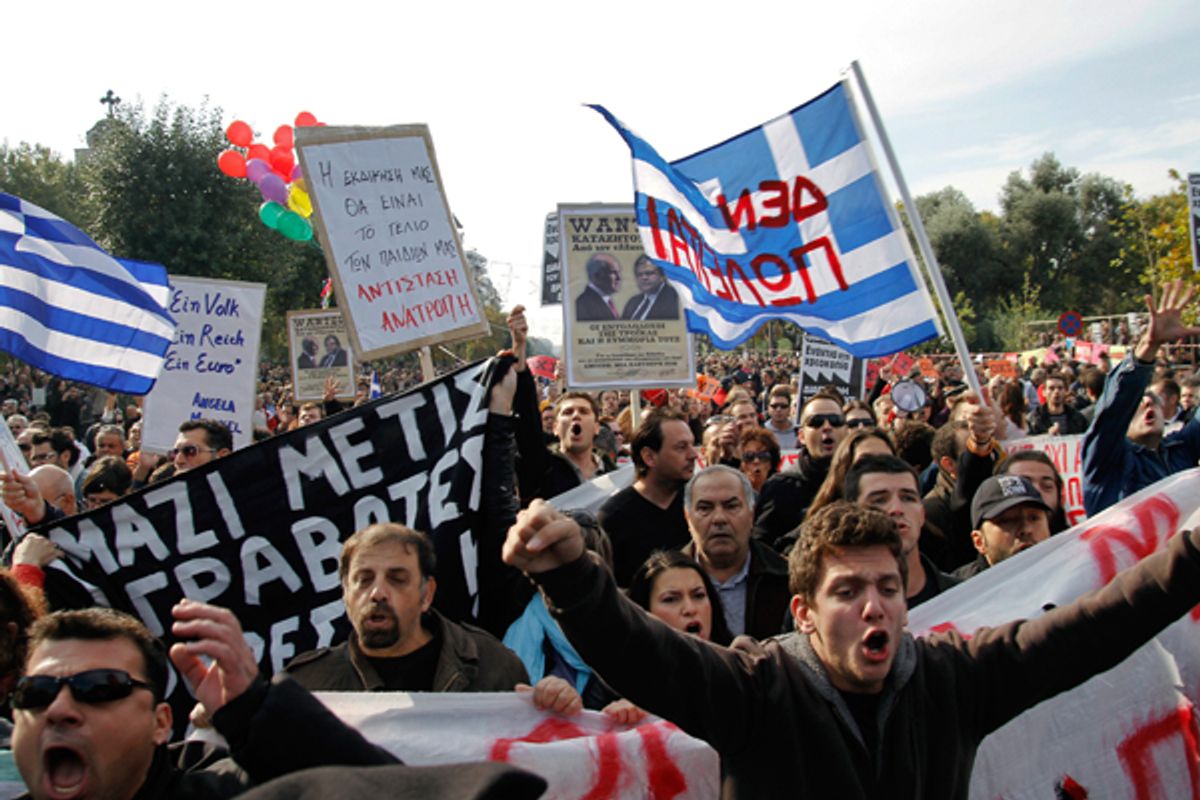 Protesters shout slogans as they protest against austerity policies in Greece. (Reuters/Grigoris Siamidis)
--

According to a report in the New York Times, member-nations of the European Union — but especially those in the south — are gutting pro-worker labor laws in a desperate effort to reduce the cost of labor.

Portugal, for example, has reduced the number of private-sector workers covered by collective bargaining agreements from 1.9 million in 2008 to just 300,000 in 2012. Spain, meanwhile, has loosened restrictions on collective layoffs, and softened limits on extending temporary work, now allowing workers to work on fixed-term contracts for as many as four years. Ireland has frozen its minimum wage, and Greece — perhaps the ground zero of the anti-labor austerity movement — has shaved its minimum wage by a fourth.

All of these dramatic social and economic changes have happened in just a few years, causing many to worry that Europe's social contract is rapidly undergoing dramatic changes without adequate democratic accountability. “The speed of change has certainly been very fast. As far as I can tell, these are the most significant changes since World War II,” Raymond Torres, the chief economist of the International Labor Organization in Geneva, told the Times.

Torres is far from alone in expressing doubts over austerity's consequences. “It has a disastrous effect on social cohesion and a tremendous effect on inequality,” Jean-Paul Fitoussi, an economics professor at the Institut d’Études Politiques de Paris, said to the Times. Fitoussi went on the claim that well-being across the continent has declined. He blames austerity for the recent rise of far-right extremist parties throughout Europe.

What's more, these reforms of the labor market seem destined to exacerbate inequality, which is currently less extreme in Europe than it is in the United States. More from the New York Times:

Europe’s strategy offers a test of the role played by labor market institutions — from unions to the minimum wage — in moderating the soaring income inequality that has become one of the hallmarks of our era.

Inequality across much of Europe has widened, but it is still quite modest when compared with the vast income gap in the United States.

The question is whether relative equity can hold as workplace institutions that for decades protected European employees’ standard of living give way to a more lightly regulated, American-style approach, where the government hardly interferes in the job market and organized labor has little say.

The evidence so far suggests the answer is no. The drop in unionization in Portugal “is going to blow the wage distribution apart,” David Card, a labor economist at the University of California, Berkeley, said.