Rep. Raul Grijalva tells Salon that House Democrats are asking "why the hell he just doesn't do it!" 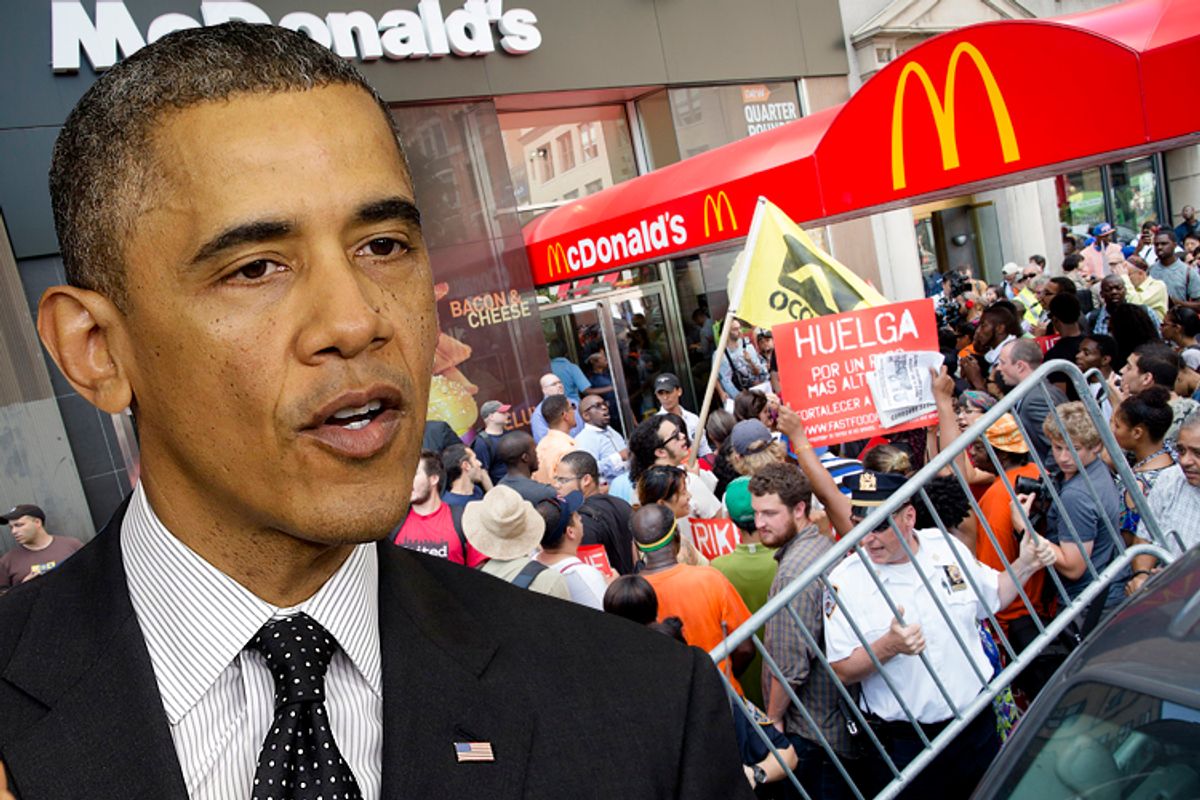 The White House has offered “no response” to a months-old call from congressional Democrats to bypass Congress and use executive action to raise workers’ wages, the co-chair of the Congressional Progressive Caucus told Salon Tuesday afternoon.

“It wasn’t responded to,” said Rep. Raul Grijalva, D-Ariz. “I mean, the response would have been, ‘We’re working on it, we’re looking into it,’ ‘We feel it’s a good idea,’ or, ‘No, we’re not going to do it.’ Any of those is a response. We received none of that.” Grijalva pledged that, starting with a Thursday rally at the National Air and Space Museum, congressional progressives would become “much more public and much more insistent” in pressing the president to act. The White House did not immediately respond to a request for comment.

Grijalva and 49 House Democrats wrote to Obama in September to urge he use executive authority to require better labor standards for workers employed through federal government contracts with private companies. That letter followed a prior July letter by Grijalva and others, and a handful of one-day strikes since May by cleaning and concessions workers in D.C. federal buildings. A report by the progressive think tank Demos estimated that about 2 million workers with taxpayer-funded jobs make $12 an hour or less.

As I’ve reported, striking workers have also alleged violations of federal law, spurring a Department of Labor investigation and securing a meeting with the administrator of the General Services Administration. The work stoppages were part of an effort backed by the Service Employees International Union, which is also the key national player behind the wave of one-day fast food strikes, which organizers have promised will escalate to involve 100 cities Thursday.

Along with lifting subcontracted workers out of poverty, Grijalva argued a move to raise their standards “would add huge momentum to the effort” by other low-wage workers in industries like fast food to win improvements. “It proves it can be done,” he told Salon, “and it puts the United States government and President Obama at the top of the moral imperative and the economic imperative to do this.”

Grijalva cited the experience of Pima County, Ariz., where as a member of the Board of Supervisors he backed a law passed two decades ago requiring a $10 minimum wage and health coverage for contracted employees. “Nobody ran away and nobody closed down because of that,” he said.

The congressman told Salon he found Obama’s recalcitrance to take such action at the federal level mystifying, given that “the poor and the working poor have suffered the most from the recession and from sequestration,” and that higher wages would strengthen purchasing power and economic growth. “It’s not a dangerous call politically,” he added.

Grijalva said the Department of Homeland Security’s 2012 move to avert deportations of young “DREAMers” offered a “good example”: an executive action that the president embraced following sustained activist pressure, and had since proven to have both “societal benefit” and “huge political benefit.” Presidential authority over federal contracting has been used in the past to push broader labor reforms, as when FDR banned religious or racial discrimination against subcontracted workers. Activists have also pushed, so far unsuccessfully, for President Obama to ban anti-LGBT discrimination by federal contractors as a step toward nationwide reform.

“Progressives are great soldiers on issues,” said Grijalva. “But once ignored, we can become a pretty significant pain in the butt. And you know, I think we’ve reached a point that we have to be a little bit more on the pain side.”

Asked whether the CPC had been aggressive enough to date about pushing Obama from the left, Grijalva said, “I think we have.” After giving the president “a benefit of the doubt moment” and getting “no response,” he said, the group had “become more assertive.” Grijalva told Salon that he had personally favored pushing the president earlier on poverty conditions in federal buildings, and “we debated that internally,” but “The thought was, let’s give the president the benefit of the doubt. That benefit has been extended. Now I think we need to push.” The next step, he said, would be “to engage everybody,” including faith, progressive and labor groups, “and to ask them quite frankly to help us pressure the White House to do the right thing.”

The Arizona congressman told Salon that support for such executive action extended beyond the CPC, to “a good solid majority” of the Democratic Caucus. He said he’d “talked to non-Progressive Caucus members saying, ‘I don’t know why the hell he just doesn’t do it.”

“I’ve talked to those workers,” the CPC co-chair told Salon. “I mean, they risk everything … For them to stand up and for the rest of us to watch, I think is horribly dishonest,” in that it amounts to “not acknowledging the fact that these people are risking everything – and you’re watching.” Given their courage, he said, “I think we owe it to them to push and push it hard on the president.”

“The risk for us [as] the Progressive Caucus is that we’ll be more marginalized,” said Grijalva. “Well, you can’t be marginal when you have these folks taking these kinds of risks.”