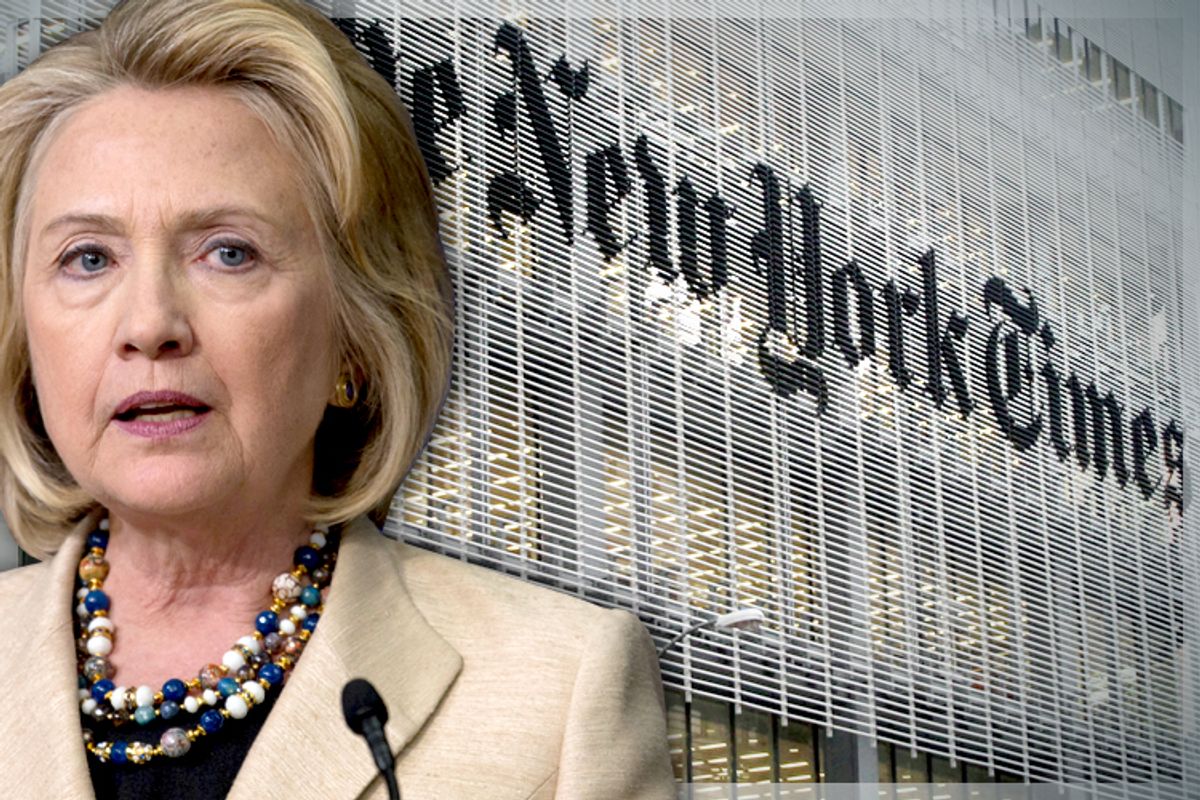 The New York Times published a piece this week in the service of the Democratic Party’s campaign for the 2016 elections that reveals a grave misunderstanding of recent history. Reporters Amy Chozick and Jonathan Martin profiled the tactics of former Secretary of State Hillary Clinton and her husband, the 42nd president of the United States, to restore their fragile relationship with African-Americans in anticipation of the former's 2016 presidential run. The Times frames it as an attempt to “to soothe and strengthen their relationship with African-Americans,” apparently strained after Bill’s 2008 comments about the Obama presidency.

Here is the motivation they assign to the Clintons:

This task [of courting the black vote] has taken on new urgency given the Democratic Party’s push to the left, away from the centrist politics with which the Clintons are identified. Strong support from black voters could serve as a bulwark for Mrs. Clinton against a liberal primary challenge should she decide to run for president in 2016.

It would have been illuminating, and accurate as well, to distinguish between Democratic Party functionaries and Democratic voters in their description; I don’t see much in the way of Democratic politicos' “push to the left”: NDAA 2012/2013, bank bailouts, the ACA, among other laws, don’t strike me as overly progressive.

Chozick and Martin assiduously cover the various black leaders with whom the Clintons have consorted since Hillary’s resignation as secretary of state earlier this year. Along with that coverage is a telling, if not accurate, description of Bill Clinton’s legacy, which Hillary will surely be relying on to vouch for her “progressive” credentials. Here is perhaps the most remarkable paragraph of the article:

Mr. Clinton has a rich, if occasionally fraught, history with African-Americans. He was a New South governor and a progressive on race who would eventually be called “the first black president” by the author Toni Morrison. But he infuriated blacks in 2008 when, after Mr. Obama won a big South Carolina primary victory, he seemed to dismiss the achievement by reminding the press that the Rev. Jesse Jackson had won the state twice and calling Mr. Obama’s antiwar position “the biggest fairy tale I’ve ever seen.”

Many African-Americans took Mr. Clinton’s fairy tale comment to mean that Mr. Obama’s candidacy itself was a hopeless fantasy.

It is true that black Americans were mightily irritated by Bill’s comments. But that’s hardly the only source of the injury.

(Un)surprisingly, even as Chozick and Martin tritely repeat Toni Morrison’s description of Clinton as the first black president, proudly repeated by Bill (and ad nauseam by mainstream media), they don’t offer any context for her remarks.

Morrison, writing in the New Yorker in 1998, was reflecting on the Republicans’ move to impeach Bill Clinton in the aftermath of revelations of his affair with Monica Lewinsky, his intern at the time. She says:

African-American men seemed to understand it right away. Years ago, in the middle of the Whitewater investigation, one heard the first murmurs: white skin notwithstanding, this is our first black President. Blacker than any actual black person who could ever be elected in our children’s lifetime. After all, Clinton displays almost every trope of blackness: single-parent household, born poor, working-class, saxophone-playing, McDonald’s-and-junk-food-loving boy from Arkansas. And when virtually all the African-American Clinton appointees began, one by one, to disappear, when the President’s body, his privacy, his unpoliced sexuality became the focus of the persecution, when he was metaphorically seized and body-searched, who could gainsay these black men who knew whereof they spoke? The message was clear: “No matter how smart you are, how hard you work, how much coin you earn for us, we will put you in your place or put you out of the place you have somehow, albeit with our permission, achieved. You will be fired from your job, sent away in disgrace, and—who knows?—maybe sentenced and jailed to boot. In short, unless you do as we say (i.e., assimilate at once), your expletives belong to us.”

It is clear that Morrison is poetic and pained here. She analogizes the experiences faced by Clinton to those faced all too often by black men. There is much that can be said about this piece. But the cynicism of Clinton and his supporters is such that her phrase was co-opted as an endorsement of his “progressive” politics, rather than what it signaled at the very least; it is a searing insight into the inferior, abject status of black men in the United States at the end of the millennium. And here is Morrison in her own words in 2008.

But Chozick and Martin, in their own perhaps subconscious cynicism merely repeat Morrison’s endorsement and omit any discussion of Clinton’s policies during his two terms as president, or during his time as governor of Arkansas.

The first “black” president and his partner in devastation proudly designed the prototype of Clinton’s famous 1996 welfare reform bill when he was the governor of Arkansas. Women who applied for aid from the state were required, among other indignities, to name the potential fathers of their children. Yes, yes, save your objections: This policy was created to search out “deadbeat dads,” and get them to pay child support.

But somehow it never occurred to many — not the press, not white liberals, not liberal feminists, much less the Clintons (if they cared at all) -- that such a reform would only be effective in further humiliating already poor women, women who, had they other options, would never have resorted to the state for help. Here’s a brilliant letter from a Seattle feminist to N.O.W. back in 2007, which sets out the various assumptions and implications of welfare reform.

The ballast for welfare reform exploited the racial antagonism against black women that was inflated and gained momentum under Ronald Reagan’s administration. But as many, from Barbara Ehrenreich to digby to Jason DeParle, point out, the Clintons and their Democratic buddies endorsed the righteous smokescreen that “workfare” was needed to teach the poor how to keep a job rather than asking for money, and to teach poor (black) women “chastity training.” Patronizing? Racist? Those words don’t even cover half of it, especially as they’re accompanied by the convenient selective amnesia about the legacy of slavery and the still-existent practice of institutional discrimination against blacks. We can see this in the history of the drug war, the prison industry, red-lining, not to mention plain old-fashioned racism as seen in our public school system, post-secondary admissions practices, and employment across multiple industries.

Hillary’s express support for welfare reform enabled Bill to get the 1996 Personal Responsibility and Work Opportunity Act passed. Peter Edelman, a senior Clinton appointee who resigned in protest of the bill, pointed out that this was the “worst thing Bill Clinton has done.” Due to the remarkable efforts of the "first black president" and his wife, and like-minded “liberals” and conservatives who believed that the poor needed to be taught to climb out of a “culture of poverty,” welfare was no longer the entitlement that it had been for decades (and should have remained as such). Rather, it was transformed into a sporadic privilege periodically and provisionally bestowed on the poor, all the while leaving millions more in poverty. As Edelman pointed out in 2011, that 1996 bill made things much worse for the poor: "There are now people who cannot find work, and who cannot get welfare."

Needless to say, Democrats and Republicans have managed to augment, enhance, exacerbate the level of nationwide poverty through its support of banking deregulation and absence of serious sanctions for bankers and subprime mortgage companies.

When Chozick and Martin write about Bill Clinton as a “progressive on race,” I have to wonder which criteria they use to measure. They use certain famous black politicians’ comments (such as those of Democratic Rep. James Clyburn or Rep. Elijah Cummings) or public gestures (such as sitting next to “friend and rival” and former Democratic Virginia Gov. L. Douglas Wilder at Howard University’s May 2013 commencement) at face value and out of context. To gauge race progress by which friends a white Democrat sits next to -- doesn’t this strike anyone as uncomfortably close to the “Some of my best friends” cliché?

Why not consider the effects of NAFTA and WTO, which decimated the manufacturing industry that employed enormous numbers of African-Americans? Many journalists and left economists have detailed the detrimental impact of the offshoring of corporations, the forgiveness of taxes, the eradication of labor protections for foreign nationals who work at formerly American companies. Why does none of this figure into the assessment of “racial progress”? Even one paragraph might have allowed for the possibility that the Times was engaged in some critical questions about the releases and information that they were being fed by the Clinton campaign.

Why not consider the effects of the 1996 Immigration Reform Bill, which was a precursor to the enormous anti-immigration tide that has swept the country, enhanced by the right-wing and neo-patriotic impulses of both Democrats and Republicans in the aftermath of the Sept. 11, 2001, attacks?

Why not consider the effects of the 1994 Crime Bill, which heralded in "three strikes" legislation at the federal level, also signed under the "first black president"? The expansion of the death penalty in the 1996 Anti-Terrorism and Death Penalty Act?

I can hear objections that Hillary should be able to run on her own record. OK, why not examine a few of her votes? Remember, it was Sen. Russ Feingold — not Sen. Clinton, or Sens. Dianne Feinstein and Barbara Boxer, or Secretary of State John Kerry — who stood up against the USA Patriot Act, as a harbinger of a (by now) vengeful, 12-year, racist and arbitrary tide of vitriol against Muslims in the U.S., Iraq, Afghanistan, U.K., Yemen, Pakistan, Somalia and elsewhere in the world. How about on the 2002 authorization to invade Iraq? AUMF 2005? The 2007 surge in Iraq? She voted in favor of them. To her credit, she voted against the 2008 FISA bill, citing checks on presidential authority, even as elsewhere she has been in support of increasing it. How does she feel about WikiLeaks? Edward Snowden? The death penalty (supports it, but not for Iran).

Let’s not judge whether someone is a “race progressive” — especially a politician -- by the utterances of his/her friends. Presumably, journalists understand that the notion of an alliance does not confirm the truth of one’s race politics; it merely demonstrates that all other concerns have been provisionally subordinated in order to further one particular goal. Sure, we can call it pragmatic, strategic, realpolitik. But regardless of the term used, journalists -- of all people -- know that citing such alliances does not offer a valuable insight or confirmation about the truth of one’s politics.

I tell my students that if they want to write about politics effectively and forcefully, they must major in something other than journalism: history, sociology, ethnic studies, politics — something other than a field that disciplines its students to forget that accurate narratives have a long-seated, deeply buried history that cannot simply be articulated through a repetition of sound bites aired by corporate news media or covering poll results. Facts, those snippets that refer to a certain state of the world, must be assembled and grounded by searching through indirect, long-buried records that have long slipped the public (and corporate media’s) memory. Such an excavation requires the skills of an archaeologist and the critical distance of an outsider -- not the propitiatory writing skills of someone familiar with the well-worn seat of an election press bus or who lunches with his subjects on a regular basis.

Of course, that assumes that establishment media such as the Times is interested in reportage from a critical perspective. Perhaps that’s the most flawed assumption of all.