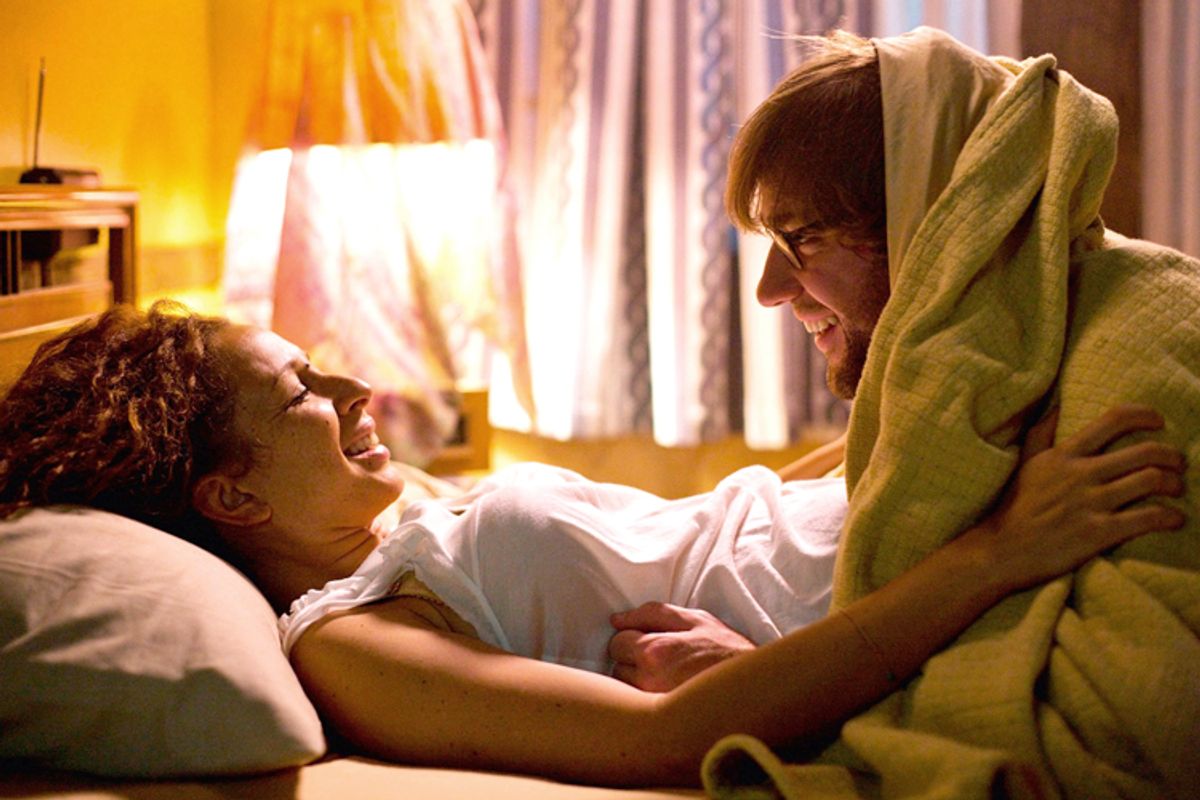 Maya Rudolph and John Krasinski in "Away We Go"
--

Actress Evan Rachel Wood recently took to Twitter to air her frustrations over the MPAA forcing a cunnilingus scene out of her upcoming movie "Charlie Countryman." She found it a bit odd that a consensual scene of sexual pleasure was considered inappropriate while extreme, murderous violence was not: "The scene where the two main characters make 'love' was altered because someone felt that seeing a man give a woman oral sex made people 'uncomfortable' but the scenes in which people are murdered by having their heads blown off remained intact and unaltered." Wood also speculated that the scene would not have been cut if it had shown a woman going down on a man.

She is utterly correct: Hollywood is sexist and sex-phobic. I'm not going to use this as an excuse to rant on the topic, though -- been there, done that. Instead, let's take a moment to recognize the best moments in cine-lingus history, shall we? Some of them are funny, some are sexy, and all deserve kudos for venturing where the MPAA would rather they not.

This 2009 film doesn't beat around the ... bush: it opens with an oral sex scene. It isn't the steamiest -- the action between John Krasinski's character, Burt, and Maya Rudolph's Verona all happens under the sheets and out of view -- but it's the awkward, fumbling nature of their romp that makes it notable.

It all starts with a dreamy nighttime make-out in a deserted corn field. Before long, Chloe Sevigny's top is off and Hilary Swank (as Brandon) is unbuttoning her pants. All we see are Sevigny's blissful smiles and the whites of her eyes -- which tell us everything we need to know about what's happening off-screen.

As Rebecca Traister wrote in Salon at the time of the 2003 movie's release, "a mustachioed and criminally attractive Mark Ruffalo takes recovering-moppet [Meg] Ryan to bed, plants her on her stomach, spreads her legs, and performs oral sex on her from behind in a scene that lasts a breathtaking two minutes." Finally, oral sex gets more than a couple seconds of screen time.

In one of the film's spookier scenes -- which is saying something -- Mila Kunis goes down on Natalie Portman. That in and of itself isn't the creepy part: It's that Kunis repeatedly transforms into Portman throughout this nightmare sequence.

It's absurd, but it's a classic. Kevin, played by Thomas Ian Nicholas, attempts to get out of the doghouse by going down on Tara Reid's Vicki -- with her parents downstairs. When her dad comes upstairs to tell her that dinner is ready, she yells with perfect timing, "I'm coming! I'm coming!"

Luckily, there's very little of Billy Bob in this sex scene. It's all about Oscar-winner Halle Berry's convincing performance of ecstasy.

Ryan Gosling backlit as he pulls down Michelle Williams' underwear. Ryan Gosling's face shoved in between her legs, while she moans and pulls at his hair. Ryan Gosling resting his face on her thigh afterward while she says in disbelief, over and over again, "Oh my God." Yes, indeed.