Major escalation makes U.S. history. Here's why it matters, and what victory could mean 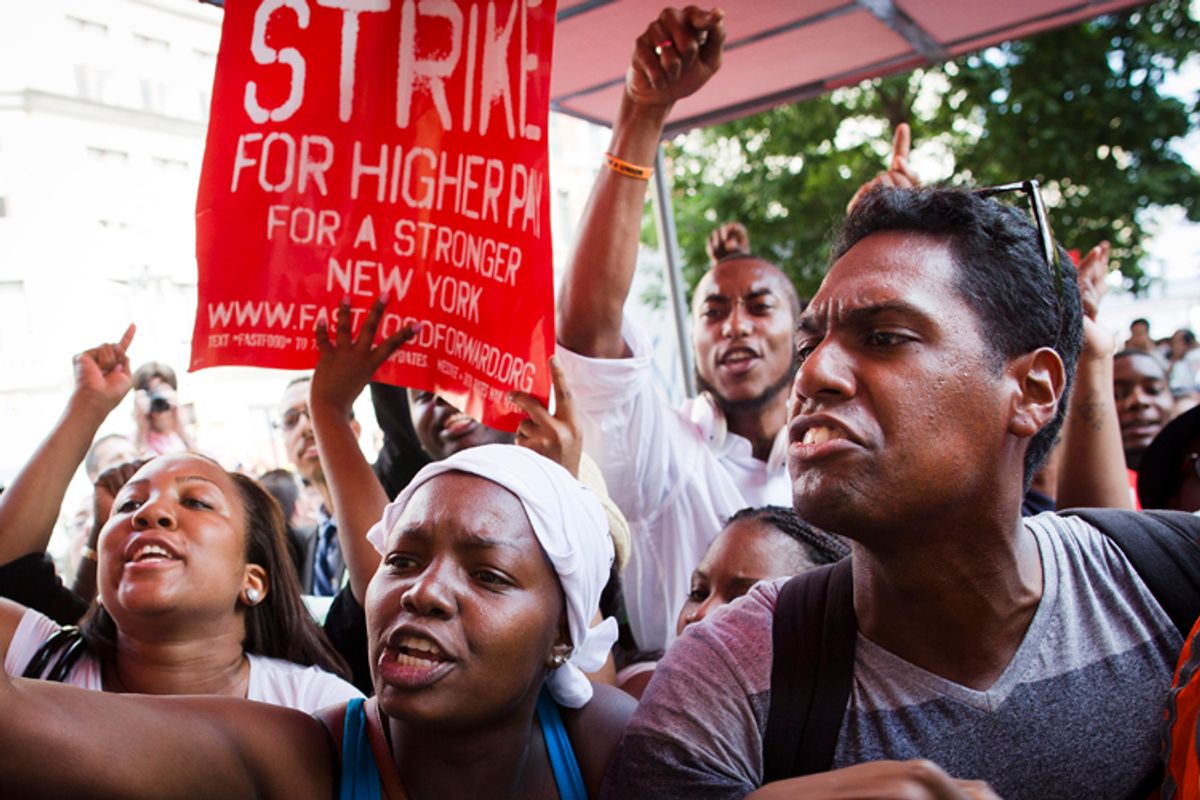 Thousands of fast food workers plan to walk off the job in 100 U.S. cities today, a major escalation in labor’s strongest-ever challenge to an industry that’s become ever more central to the present and future of U.S. work. One year after a surprise work stoppage by 200 New York City fast food workers, two questions raised by that first-of-its-kind walkout have already been answered: Could workers sustain and grow their numbers in the months after returning to the job? And could they spread their siege of the industry from comparatively labor-friendly New York City to presumably less hospitable environs across the United States? What remains unclear is whether they can compel the giants of the increasingly dominant fast food industry to concede power to employees, and at what cost.

“I’m tired of trying to make ends meet and they’re not meeting …” Richmond, Va., Burger King employee Crystal Travis told Salon in a pre-strike interview. “I don’t make enough to even have Christmas.” Richmond is one of dozens of cities where fast food strikes are expected today for the first time. Prior to her three years at Burger King, Travis said she’d spent a decade working at fast food chains including Wendy’s and McDonald's, and found “not much of a difference” between them. When she first watched last year’s New York walkout, Travis told Salon, her question was, “Is it real? Are they going to make a difference?” But having watched the strikes spread,  said Travis, “you see a reflection of yourself.” Travis, who’d never struck before today, has been visiting fellow fast food workers who live in her public housing complex to urge them to join her, and said others have shown up at her door wanting to know more about the strike. She said her organizing efforts have drawn attention from her store’s general manager, who told her in front of co-workers, “You’re crazy. Ain’t nothing gonna change.”

Jobs like Travis’ – paltry pay, constant performance for customers, erratic hours and no union -- are on the rise. “Because these are the jobs that are dominant in our economy, the fact that they are very low-wage jobs” is “setting the standards for how some businesses think they can treat their workers,” Tsedeye Gebreselassie, a researcher for the pro-union National Employment Law Project, told me in April. She noted that the top three occupational categories listed in the latest Bureau of Labor Statistics data were all jobs found in retail or fast food. And while Democrats and Republicans push trade or training as solutions for low-wage workers, research from the progressive Center for Economic and Policy Research suggests that the share of U.S. jobs that are “good jobs” declined during three decades in which the ranks of U.S. workers with advanced degrees almost doubled. From 1979 to 2010, authors John Schmitt and Janelle Jones argued, “good jobs” declined for college graduates as well as for other workers, the result of a reduction in workers’ bargaining power across the board. “The question,” Schmitt told me in the lead-up to a 60-city August walkout, “is how do we reconstruct bargaining power for workers?”

Asked about today’s strike, McDonald’s emailed a statement saying the corporation and its franchisees “are committed to providing our employees with opportunities to succeed. We offer employees advancement opportunities, competitive pay and benefits.” It also touted “training and professional development that helps them learn practical and transferable business skills.”

At a moment where organized labor is largely playing painful defense – most recently evidenced by this week’s blows to hard-fought pensions in Illinois and Detroit – the fast food campaign offers a rare case of high-profile, high-stakes offense against a virtually union-free industry. Like the organizers behind last week’s 1,448 Black Friday Wal-Mart protests, the fast food campaigners have employed both “comprehensive campaign” tactics wielding political, media and legal weapons against corporate brands, and a wave of one-day strikes in which a minority of the workforce walks off the job in hopes of embarrassing management and engaging co-workers and the public. Unlike the Wal-Mart effort or most other labor campaigns, they’ve targeted their demands – for $15 per hour and the right to unionize without intimidation -- at all the industry’s top players at once.

It’s a strategy that’s drawn notice across the labor movement. While the key player in staffing, funding and directing the effort has been the Service Employees International Union, a July report on local pre-convention forums organized by the AFL-CIO (a union federation that doesn’t include SEIU) suggests that fast food strikes came up over and over. Daniel Gross, who helped found the Industrial Workers of the World’s decade-old Starbucks Workers Union (a union without recognition from Starbucks), told me the spread of strikes had vindicated his group’s view that “you don’t need to wait for recognition, workers are ready to fight,” but noted, “We didn’t know workers were willing to strike across the country – that’s a new learning.” The campaign has also sparked segments on "The Colbert Report" and full-page industry-backed ads warning of robot takeovers.

Indeed, the fast food effort can tout a rash of bad press for top corporations – especially McDonald's, which has made news both for workers’ strikes and for its advice they pray more often and budget zero dollars for heat. Organizers say the strategy has also shaken loose real gains at particular stores, from schedule fixes to $2 raises. Perhaps most significantly, organizers claim that tactics like a picket and occupation of a Wendy’s have largely succeeded at averting or reversing retaliatory firings of strikers (in contrast, over twenty workers fired by Wal-Mart after joining a June strike are still out of a job).

So where will it all go?

University of California at Santa Barbara labor historian Nelson Lichtenstein last month told me he believes fast food and Wal-Mart strikes have proven “successful” in that they’re “having a big impact on public policy at the local level” -- echoing other academics who’ve argued the strikers’ ultimate impact will be through spurring policy change rather than securing collective bargaining. Congressional Progressive Caucus co-chair Raul Grijalva told Salon it had been “huge” and “very powerful” to see how fast food workers “risked everything” by striking, and that the $15 they demanded should be the federal minimum wage. Local SEIU president David Rolf and Seattle Council member-elect Kshama Sawant credited the strikers with helping lay the groundwork for the $15 minimum wage law that passed narrowly last month in the airport town of SeaTac. And someone present at an August gathering SEIU held with allies in Las Vegas told Salon that, along with a national deal with the top three burger corporations to facilitate unionization, strategies under serious consideration included a move to pass state and local laws mandating $15 fast food wages (asked about that account, SEIU characterized those discussions as preliminary and hypothetical).

But fast food workers and SEIU officials have repeatedly rejected suggestions that their ultimate focus is on passing new wage laws. “The minimum wage stuff is not really central to the campaign – I think more than anything, they are an effect of the campaign,” said Kendall Fells, an SEIU coordinator serving as organizing director for Fast Food Forward, the New York arm of the fast food effort (on-the-ground organizing efforts there have been backed by SEIU and largely spearheaded by the ACORN offshoot New York Communities for Change).

“The workers have decided that the way to win this campaign is to continue to grow,” Fells told Salon, “continue to strike, continue to get more community residents involved, more community leaders to the rabble, more press” on worker activism and management insults, all “exposing these companies for what they are.” Given the past year’s growth, he said, “It’ll be even bigger six months from now, and eventually the pressure will bring these organizations to the table.” He noted SEIU had “done this with janitors when people thought janitors would never have a union … We did this for hospital workers and nursing home workers … So we’ve seen this story before, and the way that you win is you stick to the script.”

Given the vicissitudes of labor law and the franchisee structure of the industry, any prospect of sustainable fast food unionization would require the effective -- presumably coerced -- consent of national corporations. Per recent labor history, could that mean a deal in which industry giants pave the way for franchisees to recognize unions and bargain collectively, and the union agrees in exchange to restrictions on how much labor costs could go up, or how many stores could be affected? When I asked SEIU president Mary Kay Henry and key SEIU strategist Scott Courtney that question in an August joint interview, Courtney answered “It could be something like that”; Henry said, “I think anything you know about traditional collective bargaining is possible, and then things we haven’t imagined.”

Asked this week if he’d accept a compromise in which SEIU agreed to leave some workers out of unionization or pre-restrict what gains could come out of contract talks, Fells answered, “I mean, I think it’s hard to say, because it really comes down to what the workers decide.” He said a committee of worker delegates representing cities with pre-August strikes decides the course of the campaign. (In an interview with In These Times, a source identified as an activist Chicago cashier charged that the campaign’s decision-making process amounted to “going through the motions” to get workers to agree to staffers’ pre-determined plans.) Asked about the delegates’ decision-making process, Fells said, “There’s banging around, banging around, and then we’ll land at something that everyone feels comfortable with.”

Would an agreement from that group be a pre-condition for SEIU to make a deal with fast food corporations? “Yeah, I mean the workers are going to be involved on every level …” answered Fells. “Workers are involved in every decision that may happen on the fast food campaign nationally and locally.” Asked in August about Henry and Courtney’s comments, Rev. Martin Rafanan, the community director for St. Louis’ fast food effort, also emphasized the importance of democracy, telling Salon he was “for any tactic or strategy at this point which can move us forward … But from where I’m standing, I’m a community ally, so my goal is to stand with workers. I believe that workers should make decisions about how they’re going to organize their industry.”

So far there aren’t any signs that McDonald's, Burger King or Yum Brands is poised to come to SEIU or anyone else with a deal. What started as a strike of 200 in one city, and is expected to today turn out thousands in a hundred cities, may need to grow exponentially again before such a prospect is truly conceivable. “I know it’s not going to be, you know, next month or next year that our raise[s] go up,” Crystal Travis told me before going on strike. “But at least we’ll be heard. And it might make a lot more people next time go, ‘Well, I’m going next time,’ or ‘I need to find out about this,’ like I did.”

If that does come to pass, and labor’s challenge to America’s fast food leviathans proves lasting and muscular enough that bosses seek a deal, what kind would be good enough to take? Last month (on a panel at Demos – video below), I told KFC worker-activist Naquashia LeGrand, one of the original fast food strikers, about my conversation with Henry and Courtney, and asked what level of compromise she’d be willing to accept. “Honestly,” she answered to applause, “compromise is not in my book. It’s more – it’s winning. I’m a winner, you know. So I would want to win our $15 and a union.”