The domestic goddess cops to some cocaine and pot use, and the tabs go nuts 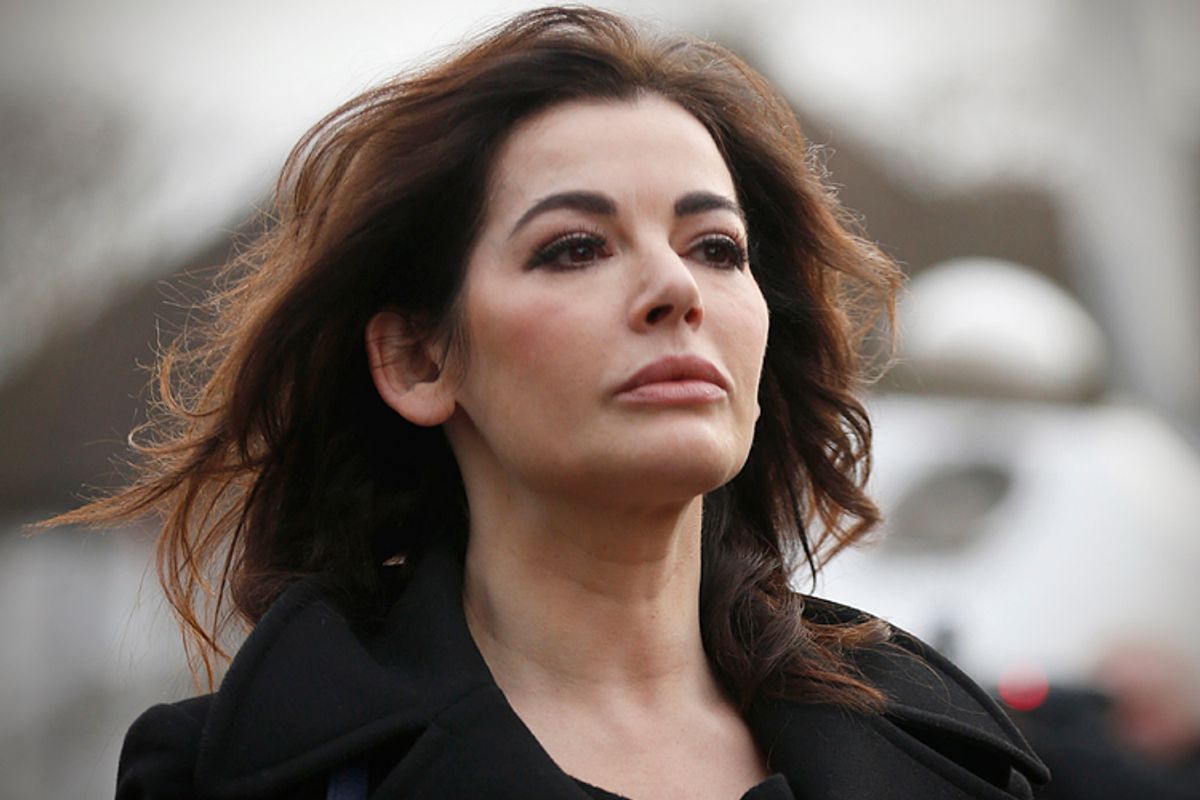 The incredibly disturbing saga of Nigella Lawson and Charles Saatchi's breakup – a tale that for months has been a bonanza of wealth, fame and dark implications of abuse – has in recent days ramped up into the stratosphere, thanks to the bonus excitement of a fraud trial against two of the couple's former assistants. And by Thursday, the story appeared to reach tabloid nirvana, thanks to the headlines emblazoned around the world announcing that "Nigella admits taking cocaine." At this point, it's all but miraculous the Daily Mail hasn't collapsed in on itself into a vortex of trolling energy.

The saga was drama fodder enough when it was just the tale of a beloved, cheeky celebrity cook and the successful businessman who was photographed last summer with his hand snugly around her throat. Throughout it all, Lawson has generally remained circumspect, even as Saatchi was granting "exclusive" statements to the British press expressing his disappointment that she made "no public comment to explain that I abhor violence." But with the recently launched fraud trial of sisters Francesca and Elisabetta Grillo, who are accused of spending over a million dollars on personal "luxuries including designer clothes and first-class air travel" on Saatchi's credit card, the domestic saga has taken yet another turn.

In Wednesday's testimony, Lawson accused her former husband of trying to "destroy" her with rumors of drug abuse. In an email sent to her last October, he referred to her as "Higella" and said, "I can only laugh at your sorry depravity. Of course now the Grillos will get off on the basis that you... were so off your head on drugs that you allowed the sisters to spend whatever they liked and yes I believe every word the Grillos have said, who after all only stole money." But last week, Saatchi backed off considerably, saying, "I like proof. I have no proof. I have never, never seen any evidence of Nigella taking any drug whatsoever. I want to be helpful, but I genuinely have no real knowledge at all."

But under intense grilling from the Grillo defense team, which accused her of having "rolled up bank notes lined with white powder littering her home, Lawson admitted, "I'm not proud of the fact I have taken drugs but that does not make me a drug addict or a habitual drug user. The fact is, I would rather be honest and ashamed. I wasn't going to be bullied with lies." She says that she tried cocaine a grand total of six times while her first husband, journalist John Diamond, was dying of cancer, and once in 2010 when "I felt subjected to acts of intimate terrorism" by Saatchi. "A friend of mine offered me some cocaine and I took it," she claims. "It completely spooked me." And quite awesomely for a woman whose weight has been a near constant source of media carping since the beginning of her culinary career, Lawson furthermore added, "People who do that are a lot thinner than I am."

Lawson also says that "I have to be honest, I have smoked the odd joint. I found it made an intolerable situation tolerable," but that pot "is a false friend and not a good idea. I found the answer was in changing the situation and trying to create a tolerable situation for me and my family. I have to say, since freeing myself from a brilliant but brutal man, I'm now totally cannabis, cocaine, any drug, free."

The defense's attempt to portray Lawson as some coked out drug fiend is a salacious bit of news, sure. But the fact that a 53 year-old woman copping to snorting some cocaine and smoking pot in her lifetime -- that she was made to tally up the number of incidents -- has made headlines around the world is all but hilarious. In the US, almost half of all adults have smoked pot at some point, and 16% have tried cocaine. The president of the United States has copped to youthful marijuana use, and New York mayor Mike Bloomberg has unapologetically declared, "You bet I did. And I enjoyed it."

Dabbling in drugs, like watching porn or sexting, is one of those things that a lot of people have done. Yet is still hypocritically treated as a huge bombshell when it turns out a famous person has done it. Maybe it's the idea of Nigella -- that an icon of cozy family dinners in her enormous, gorgeously appointed kitchen – having occasionally partied that makes Lawson's admission so seemingly scandalous. But Lawson says that "The idea that I am a drug addict or a habitual user of cocaine is completely ludicrous." And if her words are to be believed, instead of being, as she puts it, "ashamed," she might take a tip from her fellow domestic goddess – and lady who certainly knows from legal woes -- Martha Stewart. When asked earlier this year if she knew how to roll a joint, Martha just cheerfully laughed and answered, "Of course."