Michelle Obama: The one woman in America who actually has it all

Criticism of her choices shows the limits of today's feminist conversation, especially when it comes to moms 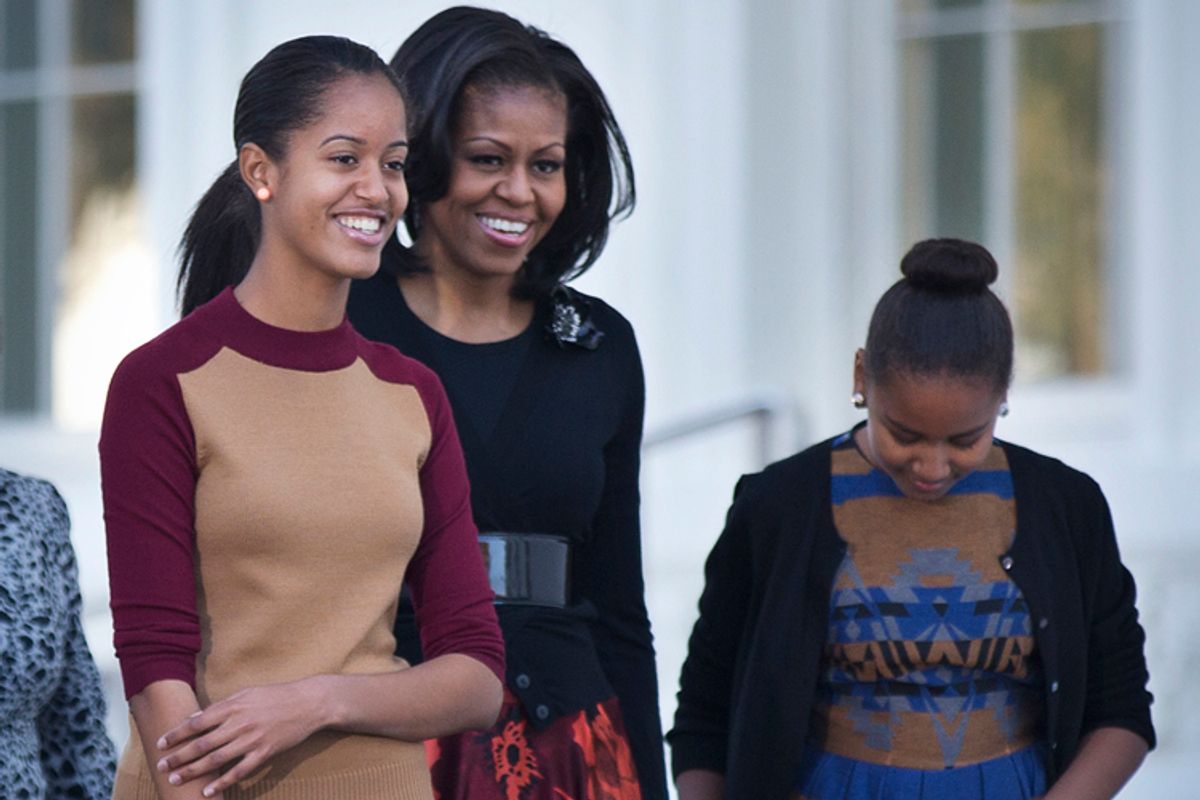 Anyone who still wonders why Michelle Obama has chosen not to take an active policy role in her husband’s administration should read the New York Times’ latest article about Chirlane McCray, the wife of New York City’s Mayor-elect Bill deBlasio. The article undermines the incoming de Blasio administration by portraying McCray as her hapless husband’s puppetmaster. An anecdote in which McCray jokes about “road rage” sets her up to be characterized in the future as an Angry Black Woman, a title Michelle Obama has nimbly sidestepped.

McCray appears poised to be the “ass-kicking, do-it-all superwoman” political analysts like Michelle Cottle claim feminists wanted Michelle Obama to be.  While Cottle dismissed Michelle Obama as little more than June Cleaver with a better fitness program, the New York Times article implies that McCray micromanages her husband’s every move. But, judging from the Times’ comments section, New York City residents are no more interested in the de Blasios’ 2-for-1 elected-official-and-his-unelected-wife package deal than Americans were with Bill and Hillary Clinton.

Modern feminist rhetoric around whether Michelle Obama has hurt the cause of feminism by “opting out” of an activist first lady role overlooks a few inconvenient, yet salient facts. For one thing, placing Michelle Obama in the category of women who “opt out” of the workforce is misguided. Michelle Obama didn’t leave the workforce to take care of her family. In fact, she took her last professional job – as director of community affairs for the University of Chicago Hospitals – when her daughter Sasha was only a month old. She left that position in 2007 to support her husband’s presidential campaign. Michelle Obama didn’t “opt out.” She did what many, though not all, political wives do – made her husband’s political career not only her business, but the family business.

To the extent the largely ceremonial role of first lady can be characterized as a job, with an approval rating of 66 percent, no one can accuse Michelle Obama of not having done it well.  The chief complaint of her detractors – on no basis more solid than their own wishful thinking – is that Michelle Obama should have attempted to break the first lady mold, not fit into it. The fact that feminists are more comfortable with the notion of Michelle Obama busting balls in a power suit than gardening in a floral dress and cardigan hews to the persistence of certain stereotypes about black women, but fails to offer any sort of valid criticism of the first lady.

As feminist writer Tami Winfrey Harris pointed out in an article for Clutch Magazine, the idea that Michelle Obama “might have a nurturing, maternal side that is not politically manufactured but a part of who she is” is unfathomable to many of her critics. In the Cottle piece, author Linda Hirshman described Michelle Obama as performing “an almost music-hall-level imitation of a warm-and-fuzzy, unthreatening, bucolic female from some imaginary era from the past.” This remarkably offensive passage insinuates that Michelle Obama has been acting out some sort of reverse minstrelsy, almost as if she has appeared before us in whiteface these last five years.

White and black feminists alike sometimes exhibit a level of discomfort at seeing Michelle Obama embrace a Norman Rockwell-esque vision of American motherhood, as if the trope doesn’t properly belong to a black woman. Historically, that was mostly true. If black women were in the kitchen baking cookies, they were often doing it not for their own children, but for the children of the white women who employed them. The rise of feminism saw white women longing to leave the home and join their husbands in the boardroom, while many black women longed for the luxury of staying home.

In her essay “Ain’t I a Mommy?” Deesha Philyaw explores “the relative absence of black women's voices in mainstream U.S. media discourse about motherhood in general.” As Philyaw points out, much of that discourse about motherhood has focused on issues mostly of concern to affluent white women. The same can be said of these endless arguments over feminism, workplace equality and Michelle Obama.  But having Michelle Obama in the role of first mom has given airtime to issues generally ignored by white feminists and the mainstream media – namely, the health, nutritional and now educational needs of low-income children. While Michelle Obama has not sought to redefine the role of the first lady, she has proven that a traditional first lady can openly support the president’s policy initiatives -- so long as she speaks on those issues from a parenting perspective.

It perhaps overstates the case to say that modern feminism shuns motherhood, especially since so many of its proponents are themselves mothers. But motherhood has been relegated to being something one does offstage, in private. By day, women are supposed to be seen as tough, fierce – on a par with men. Only at home can they can be nurturing, loving and concerned about the well-being of children and families. Kristin Rowe-Finkbeiner notes, “Too often mothers in the workplace have to hide the fact that they have children, tip over the pictures in offices and not talk about their families in order to be taken seriously.”

Rowe-Finkbeiner argues that “having a first lady who embraces her own motherhood is a boost to the 85 million mothers across our nation.” This may be true, but I think the benefits of Michelle Obama’s public embrace of motherhood run deeper than that.  While writers like Kay Hymowitz insist that “the pesky laws of mathematics make the two goals of workplace equality and women’s freedom of choice incompatible,” equality and choice need not be incompatible goals. Framing administration policy through a motherhood/parenting lens ensures that the needs and concerns of parents remain part of the national discourse. For example, discussing parenting issues in conjunction with workplace equality -- instead of banishing parenting concerns to the private sphere of personal choice – will eventually allow for the development of workplace policies that take the needs of parents into account, thus allowing women to achieve greater participation in the workforce at all levels, instead of opting out.

And I know when she was with the girls, she’d feel guilty that she wasn’t giving enough time to her work [...] And when she was at work, she was feeling guilty she wasn’t giving enough time to the girls. And like many of you, we both wished that there were a machine that could let us be in two places at once. And so she had to constantly juggle it, and carried an extraordinary burden for a long period of time.

Michelle Obama no longer has to live that struggle. In fact, she appears to be the one woman in America who actually has it all. So when feminists complain that Michelle Obama is bad for feminism, perhaps what they really mean is that her refusal to buy into their narrow definitions of feminism exposes the shallowness of today’s feminist discourse.