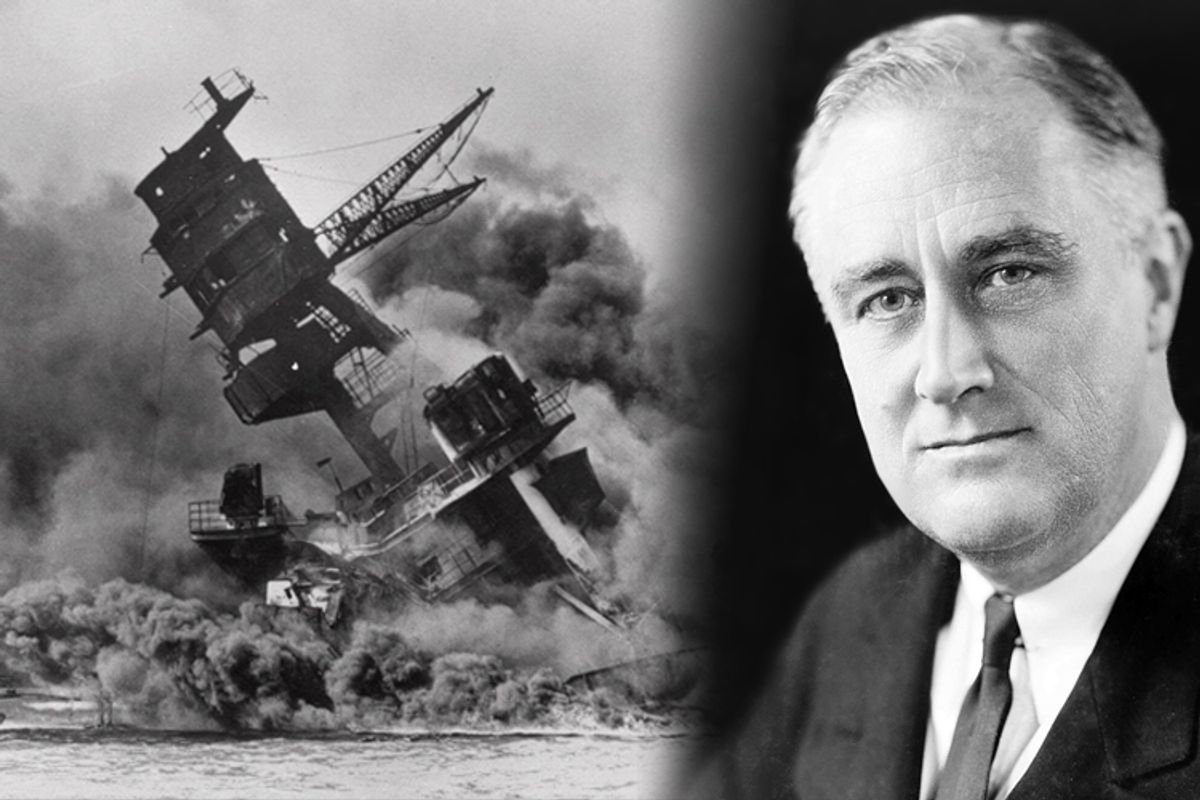 Few people realize that it was oil -- the shortage of oil -- that precipitated the Japanese attack on Pearl Harbor on December 7, 1941.
Tensions between the United States and Japan were rising throughout that fateful year. Having initiated a war with China (America's ally) and occupied Indochina, Japan's totalitarian government was intent on imposing its will on all of the people of East Asia.

In the summer of 1941, before leaving for Placentia Bay, U.S. President Franklin D. Roosevelt had ordered a freeze on Japanese assets. That measure required the Japanese to seek and obtain licenses to export and pay for each shipment of goods from the United States, including oil.

This move was most distressing to the Japanese because they were dependent on the United States for most of their crude oil and refined petroleum products. However, Roosevelt did not want to trigger a war with Japan. His intention was to keep the oil flowing by continuing to grant licenses.

Roosevelt had a noose around Japan's neck, but he chose not to tighten it. He was not ready to cut off its oil lifeline for fear that such a move would be regarded as tantamount to an act of war.

That summer, while Roosevelt, his trusted adviser Harry Hopkins and U.S. Undersecretary of State Sumner Welles were attending the shipboard conference off Newfoundland and Secretary of State Cordell Hull was on vacation at the Greenbrier in West Virginia, the authority to grant licenses to export and pay for oil and other goods was in the hands of a three-person interagency committee.
It was dominated by Assistant Secretary of State Dean Acheson, whom one historian described as the "quintessential opportunist of U.S. foreign policy in 1941."

Acheson favored a "bullet-proof freeze" on oil shipments to Japan, claiming it would not provoke war because "no rational Japanese could believe that an attack on us could result in anything but disaster for his country."

With breathtaking confidence in his own judgment, and ignoring the objections of others in the State Department, Acheson refused to grant licenses to Japan to pay for goods in dollars. That effectively ended Japan's ability to ship oil and all other goods from the United States.

Acheson's actions cut off all American trade with Japan. When Roosevelt returned, he decided not to overturn the "state of affairs" initiated by Acheson, apparently because he feared he would otherwise be regarded as an appeaser.

Once Roosevelt perpetuated Acheson's trade embargo, the planners in Japan's imperial military headquarters knew that oil to fuel their fleet, as well as rubber, rice and other vital reserves, would soon run out.
By the end of the year at the latest, Japan would need to capture new supply sources in the oil-rich Dutch East Indies, which the United States would surely oppose. And to protect its long exposed flank as it moved south, the Japanese Navy would have to deliver a knockout blow to U.S. naval and air power in the Pacific.
Without oil, Japan could not survive a long war. The blow would be delivered at Pearl Harbor.
Throughout the summer and autumn, the First Carrier Division of the Japanese Navy secretly practiced low-level torpedo bombing in Kagoshima Bay, which bore a resemblance to Pearl Harbor. The plans for the Pearl Harbor attack were being developed by Admiral Yamamoto Isoroku, an innovative thinker with what the historian Gordon Prange has called "a gambler's heart."
In September 1941, Japan's prime minister, Prince Konoye Fumimaro, who had been urging a personal meeting with the president to reach a peace agreement, was almost assassinated by pro-war fanatics wielding ceremonial knives. Weakened by the attempt to overthrow him and losing power and influence to militarist elements, Prince Konoye's government fell on October 16, less than two months before the attack.
That day, meeting with Harry Hopkins and his top military advisors, FDR expressed concern that the new Japanese government would be "much more anti-American" than the old. Sure enough, two days later General Tojo Hideki, leader of the militarists and the minister of war, became Japan's prime minister.
Anticipating a move southward by the Japanese, the United States began reinforcing its air forces in the Philippines and constructing a chain of airfields from Hawaii toward Australia and the Philippines. These moves provided hard evidence to support Tojo's arguments for war as soon as possible.
In Washington, Ambassador Nomura begged to be relieved after Tojo took over the government. He was ordered to stay on and continue to offer elaborate proposals for settling the looming crisis, proposals that Tojo knew would be rejected by the United States.
The Japanese offered to reverse their aggressive designs on Indochina and to begin to withdraw troops under two conditions: first, if peace with China was achieved without interference by the United States (in other words, on Japan's terms) -- and second, if the United States restored trade in oil and other resources.
The United States could not possibly agree to this because it would amount to an abandonment of China and its Nationalist government. For its part, the Roosevelt administration, as the price for lifting trade sanctions, continued to insist that Japan withdraw its troops from China and Indochina and reconsider its commitment to the Tripartite Pact (by which Japan would declare war if the United States joined in the European war against Germany).
In the final days before the attack on Pearl Harbor, U.S. Secretary of State Hull also proposed that in any settlement with China, the United States and Japan would agree to recognize no Chinese government other than that of the Nationalists led by Chiang Kai-shek. There was not the slightest chance that Tojo would accept these proposals.
Nomura pleaded with Tojo for more time to negotiate, but he refused, saying a settlement agreement with the United States must be signed by November 29. "After that, things are automatically going to happen."
At a cabinet meeting on November 7, Hull warned that Japan might attack at any time. Roosevelt ordered him to keep the negotiationsgoing and to "do nothing to precipitate a crisis."
On November 22, Admiral Yamamoto ordered the First Carrier Division at Hitokappu Bay in the Kuriles, north of Japan's main islands, to "move out…on 26 November and proceed without being detected to the evening rendezvous point…set for 3 December. X-day will be December 8 [Japanese time]."
At a large rally in Tokyo on November 30, Prime Minister Tojo incited the crowd, claiming that the United States and Britain, in order to "satisfy their greed," were preventing development of the "East Asia Co-Prosperity Sphere."
"We must purge this…practice from East Asia with a vengeance," Tojo said.
It was this speech that caused Roosevelt to cut short a belated Thanksgiving in Warm Springs, Georgia, and return to Washington the next day.

David L. Roll, an attorney and contributor to The Globalist, where this feature first appeared, is the author of "The Hopkins Touch: Harry Hopkins and the Forging of the Alliance to Defeat Hitler" (2013).