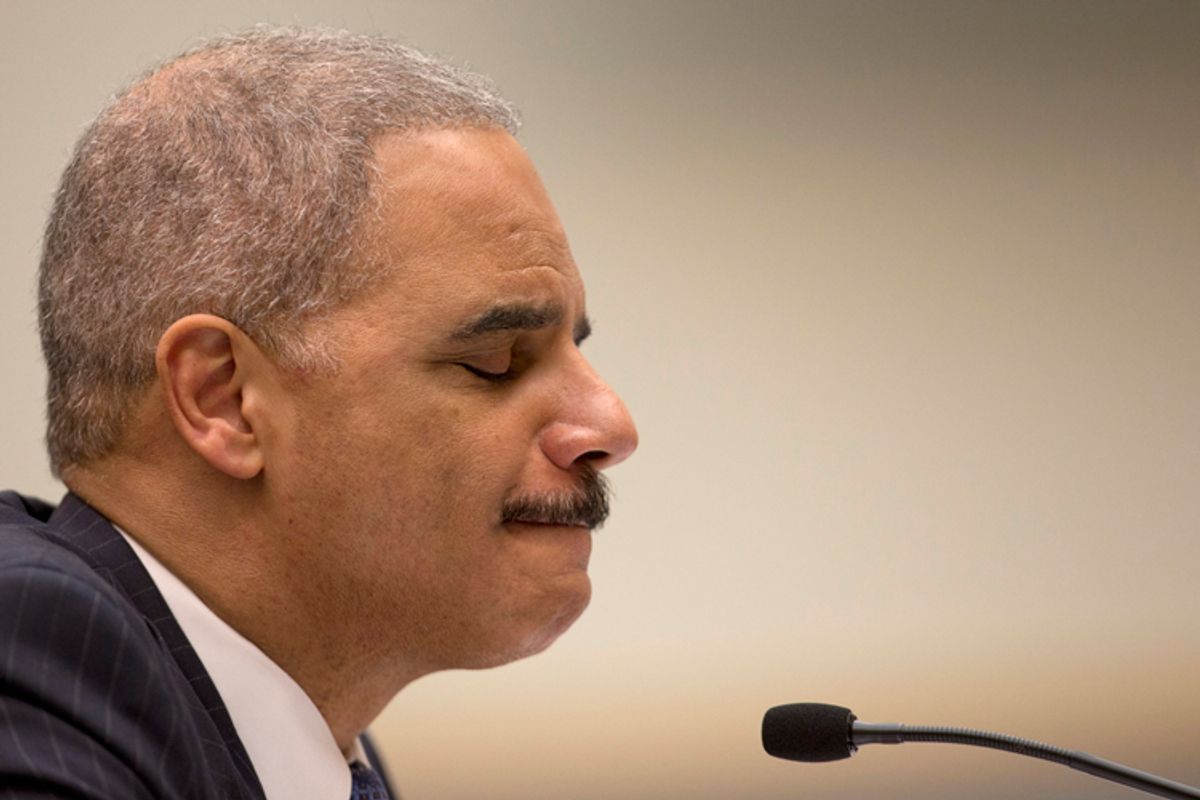 "It is very clear that prosecutors control the criminal justice system through their charging and plea bargaining powers,” wrote Angela Davis last year, commenting on the fact that 95 percent of defendants in criminal cases forgo their day in court and opt instead to plead guilty. Buoyed by mandatory minimum sentence laws, prosecutors hold undue power and leverage in the U.S. judicial system.

The right to trial, in the face of prosecutorial bargaining power, is de facto obliterated. What, after all, is a right if recourse to it appears as no option at all? HRW goes as far as to say that drug defendants -- often caught for minor offenses -- are "forced" to plead guilty when prosecutors present the risk of years in prison as the alternative.

Relying on mandatory minimun sentencing laws -- enacted by Congress in the 1980s -- federal prosecutors consistently extract guilty pleas as well as forcing defendants to inform on others. "Prosecutors favor mandatory sentences because they enhance their leverage not only to get convictions via pleas, but to get defendants to cooperate with the government in the prosecution of others in exchange for a lower sentence," HRW noted.

“Going to trial is a right, not a crime. But defendants are punished with longer sentences for exercising that right," said HRW's Jamie Fellner, who authored the 126-page-report “An Offer You Can’t Refuse: How U.S. Federal Prosecutors Force Drug Defendants to Plead Guilty.”

Fellner explained that prosecutor tactics constitute unmitigated coercion as pro forma in U.S. justice. "Prosecutors give drug defendants a so-called choice – in the most egregious cases, the choice can be to plead guilty to 10 years, or risk life without parole by going to trial ... We don’t let police beat suspects to get confessions. Threatening someone with a life sentence can be just as coercive – and just as wrong," Fellner noted.

The HRW report is based on hundreds of drug cases illustrating how prosecutors push for mandatory sentences at trial, as well as further enhancements and extensions to sentences, to render defendants too terrified to opt for a day in court. Some examples are chilling. Take, for example, Mary Beth Looney -- a first-time offender who refused a plea of 17 years for dealing methamphetamines and possessing guns in her home. The prosecutor filed a superseding indictment increasing her charges. Convicted after trial, Looney was sentenced to 45-and-a-half years in prison. Lashonda Hall was handed down the same hefty prison sentence after she refused to plead guilty to conspiracy to distribute cocaine and crack.

The idea that a justice system be undergirded by the right to a fair trial has disintegrated to little more than myth in recent decades given the undue power of the prosecutor to seek mandatory minimum sentences and extract guilty pleas. Whether a defendant has or has not committed a given offense takes a back seat to whether the vagaries of a trial are worth possible decades in jail, as opposed to a plea and a shorter sentence. As HRW points out, the average sentence for federal drug offenders who pleaded guilty was five years, four months; for those convicted after trial the average sentence was 16 years. When a prosecutor chooses to pursue mandatory penalties, a judge can do little more than impose them. In such instances -- which are common -- "judges have been reduced to virtual bystanders."

It's worth noting that the reason plea bargains have become the norm is to deal with a justice system overextended by the war on drugs and its vile production of criminals out of minor drug users. "If every criminal case went to trial, the overburdened criminal justice system would grind to a halt, and the U.S. Supreme Court has accepted this logic in decisions sanctioning plea bargains," HRW wrote.

While Attorney General Eric Holder last summer instructed federal prosecutors to avoid pursuing charges carrying minimum mandatory sentences for certain low-level offenses, HRW believes that "it is too soon to tell how prosecutors will carry out the policies, but they contain easily exploited loopholes and do not prohibit prosecutors from pursuing harsh sentences against any defendant who refuses to plead."

As the situation stands, the U.S. boasts the highest incarceration rates in the world, with over 50 percent of the federal prison population convicted of drug offenses. As HRW's research highlights, then, huge swaths of the federal system's 211,000-plus federal prisoners are behind bars having never received a fair trial.