Scaring people can convince them to hand over their money 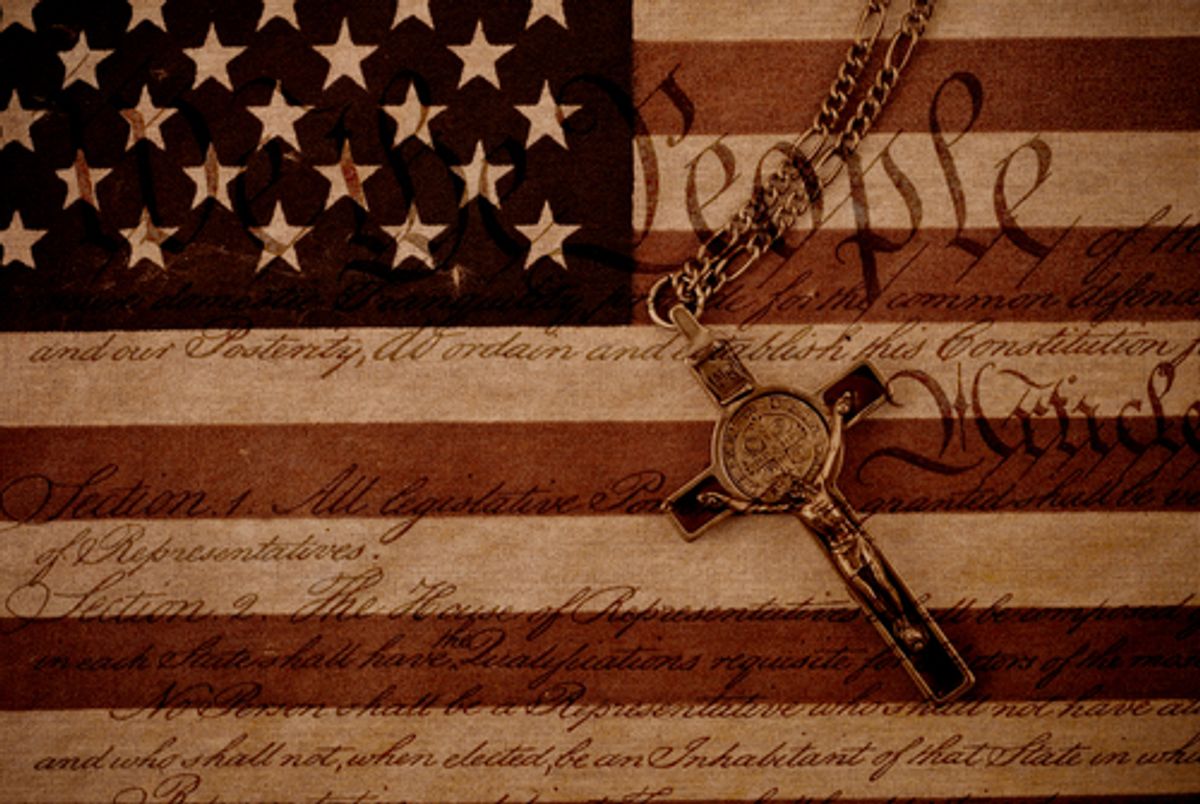 So why then are we hearing all these people who live their lives attacking religious freedom complaining all the time that “religious freedom” is under attack from liberals? Whydoes every religious-right publication and event echo the claim that right-wing Christians are somehow being stripped of the very right to religious freedom the right has worked tirelessly to take from everyone else for decades?

The simple answer is they’re lying. Claiming the mantle of victimhood is so politically potent that religious-right leaders are going to do it, no matter how untrue it is, because, to be blunt, they’re not held back by any moral interest in honesty. Getting Grandma to think she's going to lose her church is a great way to get her to sign her Social Security check over to your organization.

The longer answer is that the religious right has concocted a new strategy to squelch religious freedom: By redefining “religious freedom” to mean its opposite. The hope is that by repeatedly using the term “religious freedom” when they mean “giving the Christian right power to impose their faith on others,” they can eventually drain the phrase of all its meaning and finally, after decades of fighting secularism, make it easier for the religious right to strip away individual protections for religion. In other words, they hope by saying that up is down long enough, the public and the courts will finally believe it.

This attitude—that their “religious freedom” can only be protected if they get to foist their faith on everyone else—is nakedly obvious every year when the whining about the mythical “war on Christmas” begins. Needless to say, there is no war on Christmas. There is no effort whatsoever to prevent anyone from celebrating Christmas, buying Christmas presents, going to mass on Christmas, or playing that Manheim Steamroller record until you want to claw your ears out. Without fail, every example the right comes up with to prove there’s a war on Christmas is, in fact, something else: An attempt to recognize that not everyone is a Christian and respect that there are multiple holidays people may be celebrating in lieu of, or in addition to, Christmas.

This belief that Christians, particularly right-wing Christians, are entitled to be acknowledged at the exclusion of everyone else and entitled to have their holidays held out as more important than everyone else’s cropped up immediately after Thankgiving, right on schedule this year. The National Republican Congressional Committeetweeted out a picture of a T-shirt they’re selling that says, “’Happy Holidays’ is what liberals say,” in Comic Sans font, of course. On the back it reads, “Merry Christmas.” The “joke” doesn’t make sense unless the viewer agrees with the premise that conservative Christians are better than everyone else, and in order to honor how much more important they are, all other holidays and faith traditions need to be hidden away, as if they’re shameful.

Now the belief that “religious freedom” actually means the religious right gets to impose its beliefs on you is going to be tested by the Supreme Court. While many think the case of Hobby Lobby suing to avoid having to offer insurance benefits that cover contraception is primarily about reproductive rights, the real question at the center of the case is how much is your boss allowed to impose his religion on you, just because you work for him?

The employee/employer relationship should be simple: You work for a company, and they pay you with a combination of cash and benefits in compensation. Since you earned it, your cash and benefits belong to you to use as you see fit. But Hobby Lobby—and many other companies run by Christian conservatives—isn’t happy with that way of doing things. They want to claim that your compensation package still belongs to them after you’ve earned it and should be tailored to fit their religious beliefs, even if you, the rightful owner of the compensation package, do not share their beliefs. In their lawsuit, they claim that they should be able to determine how you use your insurance plan, and that they should be exempt from the federal government’s mandatory minimums in how they compensate you because they claim to have religious objections.

If Hobby Lobby wins its case, the precedent will create a massive incentive for corporations to sue to have all sorts of rights to use the fact that you work there as an excuse to force their religious beliefs on you. If your boss can force you to use your earned benefits according to his religious dictates, why not the rest of your compensation? Since he signs your paycheck, will he be able to sue and say that you shouldn’t be able to spend it in ways he believes violate his religion? Being able to claim that their “religious freedom” exempts them from all sorts of labor laws will be a massive boon to the religious right, and they will certainly start looking for ways to expand the ways they can force you to live by their religious rules, beyond how you use your insurance.

Unsurprisingly, Hobby Lobby’s owner is a big fan of ignoring the First Amendment and demanding that the government endorse religion, as well. Not just any religion, but specifically the conservative interpretation of Christianity. The owner of Hobby Lobby has spent a fortune trying to get Bible study into public classrooms. He thinks by making it an “elective” course, that creates enough cover, but the Constitution is clear that the government cannot endorse any religion. Having a Bible study course is a clear endorsement of religion, something conservatives would immediately grasp if a school tried to start a Koran study course. But part of the religious right’s new definition of “religious freedom” is the belief that conservative Christianity is special and that its followers are entitled to foist their religion on people in ways no other religious believers get to do.

That’s what the religious right means by religious freedom: The removal of your right to have your own beliefs, free from interference by people who have power over you. The right dearly wants religious freedom to mean the right of conservative Christians and only conservative Christians to foist their beliefs on you through your job and through the government and squelch any cultural attempts to be inclusive of all the diverse belief systems in America. The only way to fight back is for liberals to reclaim the term “religious freedom” for what it really means: The right to choose for yourself what you believe without having the law or your boss trying to tip the scales.