Conservatives have a Mandela problem

Republicans were wrong about South Africa's great liberator. Now they have to say something nice about him 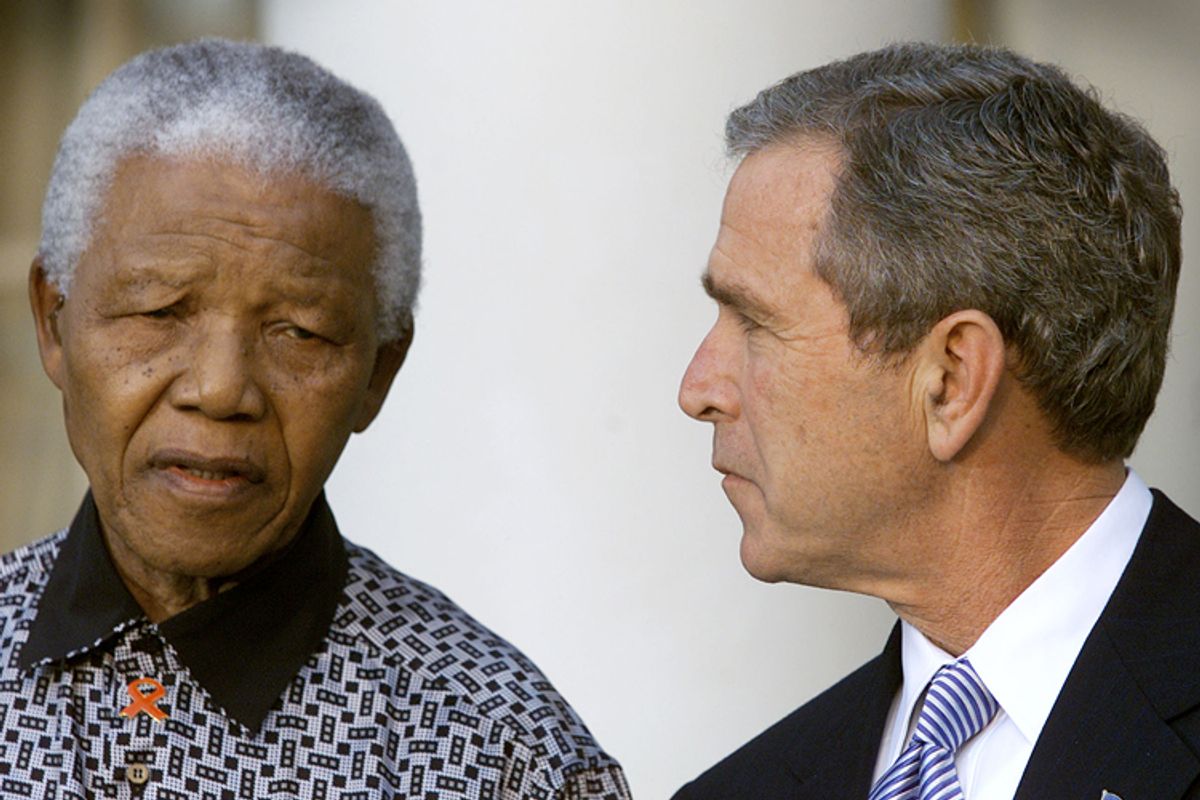 For right-wing pundits, talking about Nelson Mandela is a minefield.

Throughout the Reagan administration, American conservatives regarded South Africa’s apartheid government as a bulwark against communism, especially compared to the rest of sub-Saharan Africa. A generation of conservative operatives, including the disgraced Jack Abramoff and the very influential Grover Norquistwritesin National Review, “Like many other anti-Communists and Cold Warriors, I feared that releasing Nelson Mandela from jail, especially amid the collapse of South Africa’s apartheid government, would create a Cuba on the Cape of Good Hope at best and an African Cambodia at worst.”

Indeed, the right was hardly vocal in opposition to Apartheid. On Twitter, The Nation’s Lee Fang pointed to an 1986 column by William F. Buckley arguing that the U.S. should “Continue our moral pressure by all means. But stop trying to fine-tune South African policy from the White House; pull back on the one-man, one-vote business; and c) forget blanket sanctions.” This is like Paul Ryan’s plan to fight poverty through “spiritual redemption.”

In the eyes of many conservatives, Nelson Mandela was a terrorist—indeed some are still saying so today—so they might be understandably tongue-tied when he ascended to the pantheon of great men. Yesterday pundits compared him to, among others, Abraham Lincoln, George Washington (from Charles Krauthammer!), Gandhi and Martin Luther King Jr. A rough comparison, might be if history in the Middle East had turned out differently and conservatives had to say something nice about Yasser Arafat.

Some of the more gracious commentary acknowledges being wrong about Mandela. Murdock goes on to write:

Far, far, far from any of that, Nelson Mandela turned out to be one of the 20th Century’s great moral leaders... He also was a statesman of considerable weight. If not as significant on the global stage as FDR, Winston Churchill, and Ronald Reagan, he approaches Margaret Thatcher as a national leader with major international reach.

But even well after Mandela had been freed and elected president, he was hardly universally beloved among American conservatives. As my colleague Joan Walsh points out, he infuriated the right in 2003 when he criticized the Iraq war. The exact quote, The Other McCain points out, was “All Bush wants is Iraqi oil. There is no doubt that the U.S. is behaving badly. Why are they not seeking to confiscate weapons of mass destruction from their ally Israel? This is just an excuse to get Iraq’s oil.” So, Mandela being correct on the Iraq war remains a sore spot.   Some conservatives felt the need to point this out upon his death.

O’Reilly’s guest Rick Santorum pulled us back down to the expected level of discourse when he said Mandela stood up to a “great injustice,” and then compared the legally sanctioned and brutally enforced segregation of millions of people to the “ever-increasing size of government that is taking over and controlling people’s lives, and Obamacare is at the front and center of that.”

Venturing further into the fever-swamp, it’s possible to find the worst kind of garbage. On his Facebook page, Ted Cruz posted a strongly worded memorial to the great man and some took issue.

Mmmm... I found something I disagree with Cruz on.

Sad to see you feel this way Ted. He was a terrorist. I guess you have only seen the Hollywood movies

Let's not forget that Mandela called Castro's Communist revolution "a source of inspiration to all freedom-loving people."

Meanwhile Michelle Malkin’s site Twitchy, brought it all back to groundlessly mocking President Obama, firmer ground for most of her comrades.