Much of the American right supported apartheid, almost to the bitter end. Why we must remember that 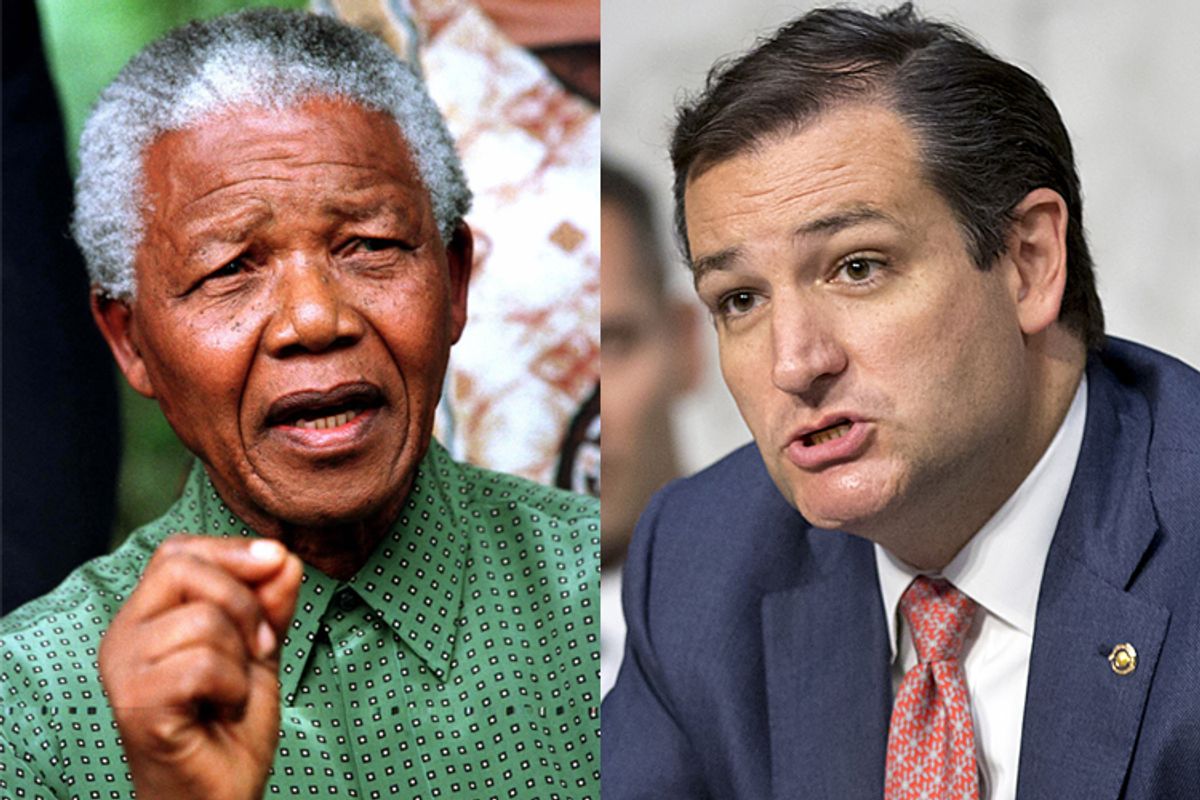 I tried to honor Nelson Mandela on the day of his death, and love my political enemies. But the whitewashing of Mandela’s legacy, as well as the role of the United States in supporting both apartheid and Mandela’s long imprisonment, has to be rebutted.

It began on Mandela’s 95th birthday in July, when House Speaker John Boehner had the audacity to declare in a tribute, "At times it can almost feel like we are talking about an old friend.”

It got much worse when Sen. Ted Cruz announced Thursday night: "Nelson Mandela will live in history as an inspiration for defenders of liberty around the globe.”

But Cruz’s political heroes opposed Mandela as a terrorist and a communist, and there’s little doubt the red-baiting Texas senator would have done the same had he been in Congress back then. (The Daily Beast’s Peter Beinart and Foreign Policy’s Sam Kleiner (from July) have the two best pieces about “apartheid amnesia” I’ve read.)

It’s shocking how little American leaders of both parties did to oppose the rise and consolidation of the brutal apartheid regime in the ‘50s and '60s, but it was Richard Nixon who developed closer ties. The anti-apartheid movement of the 1970s and '80s – where Barack Obama got his political start; I covered the University of Wisconsin's successful divestment movement with the Daily Cardinal in 1978 -- was demonized as the far left at the time. Moderates proposed alternatives like the Sullivan Principles, named after Rev. Leon Sullivan, a General Motors board member, which tried (and failed) to impose a code of conduct on companies doing business in South Africa (Sullivan eventually agreed they weren't enough).

Ronald Reagan made it a priority to fight domestic and international divestment efforts -- efforts that, in the end, helped pressure the South African government to enter negotiations and free Nelson Mandela. Reagan vetoed an amazingly (if belatedly) bipartisan bill to impose tough sanctions on the apartheid regime. Of course then-congressman Dick Cheney had voted against the sanctions in 1986, and he defended his position while running for vice president in 2000, telling ABC: "The ANC was then viewed as a terrorist organization ... I don't have any problems at all with the vote I cast 20 years ago.''

The Heritage Foundation was a clubhouse for apartheid backers; as late as 1990, when Mandela had been freed from prison and traveled to the U.S., Heritage suggested he was a terrorist, "not a freedom fighter." Grover Norquist advised pro-apartheid South African student groups and declared that the issue "is the one foreign policy debate that the Left can get involved in and feel that they have the moral high ground,” while insisting that it was a "complicated situation."  It was not.

As late as 2003, the National Review attacked Mandela for opposing the Iraq war. His “vicious anti-Americanism and support for Saddam Hussein should come as no surprise,” NR wrote, “given his longstanding dedication to communism and praise for terrorists.”

It’s also disrespecting Mandela to leave his radicalism out of his tributes. For a time he believed ending apartheid would require armed resistance, and although he eventually renounced violence, he refused to do so as a condition of being released from prison. He was a revolutionary who believed in a radical redistribution of wealth, and a global warrior against poverty, to the end. Yes, it’s important to remember his legacy of reconciliation, and love, toward white South Africans who had brutalized him. But it’s equally important to remember the commitment to equality that let him endure prison, and adopt reconciliation as the best strategy to achieve freedom and justice.

So I’m not dwelling on the hypocrisy of the right at this point, but I can't ignore it either. In the spirit of Mandela, it is worth remembering that in the end, even conservatives like Senate Minority Leader Mitch McConnell and former House Speaker Newt Gingrich  opposed Reagan and supported sanctions. "I think he is wrong,” Mitch McConnell said. “We have waited long enough for him to come on board."

Credit where it's due. That’s wonderful. But I can’t imagine anything like that happening today. Ted Cruz would likely be listing Mandela as a Communist, the way he did some of his Harvard Law professors. Amazingly, the Republican Party has moved backward while the world moved forward.

UPDATE: Ted Cruz's Mandela-hating admirers, at least, see the incongruity of his stance. They've infested his Facebook post with rage at Mandela -- and Cruz.