Pick of the week: The Coens' odyssey to 1961 Greenwich Village

A tragicomic portrait of a struggling folkie, "Inside Llewyn Davis" is among the Coens' best 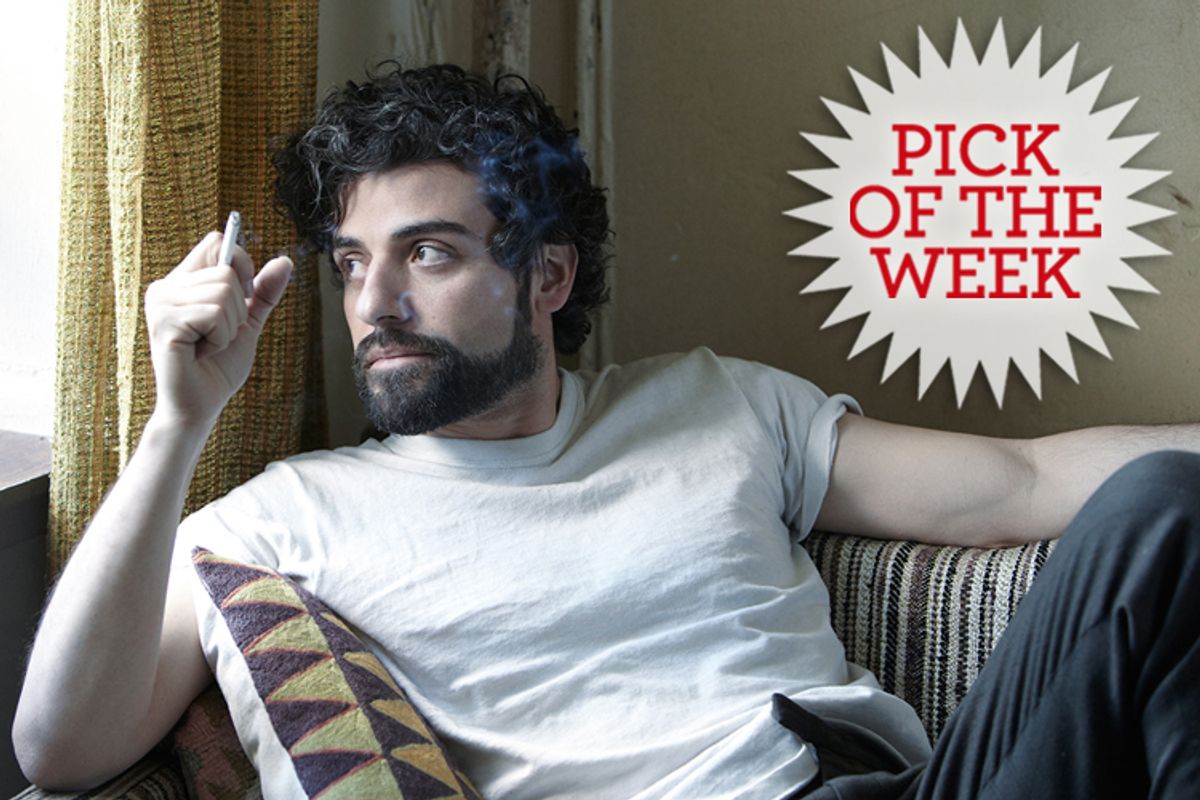 Anyone who still thinks that Joel and Ethan Coen, the writer-director-producer-editor duo behind “Fargo” and “No Country for Old Men” and “Blood Simple” and “True Grit” and the new “Inside Llewyn Davis,” are a pair of heartless, calculating bastards is – well, that person is still partly right. But only partly. There’s a moment in “Inside Llewyn Davis” when Carey Mulligan, playing a young folksinger in 1961 New York, is onstage at the Gaslight Café singing a gorgeous trio version of “500 Miles,” in a group that also includes her husband (played by Justin Timberlake) and looking out into the crowd at the man she loves (and also hates). That would be Llewyn Davis (Oscar Isaac), the handsome, talented and thoroughly irresponsible protagonist of the film, and there’s more passion, more sadness and more romantic yearning in that one moment – with its sundered lovers and slightly too-sweet folk song – than in a month’s worth of rom-coms.

I’ve already heard from people who haven’t enjoyed this movie because they found couch-surfing, folk-purist, arrogant Llewyn too unpleasant a character to spend two hours in his company. Fair enough, I suppose; if you require a movie in which you’re always rooting for the hero (or find his struggle heroic in the first place), this one might not be it. But for my money, the 33-year-old Isaac – who was born in Guatemala, raised in Florida, and has been working his way toward stardom for years – gives the year’s breakout performance, and “Inside Llewyn Davis” is one of the Coens’ richest, strangest and most potent films. They are justifiably known for their dialogue, their pacing, their plotting and their wit, and that’s all here. But “Inside Llewyn Davis,” even with its meticulous portrayal of early-1960s Greenwich Village, pushes beyond realism and satire into more mysterious terrain, into the surrealism or metaphysics or even spirituality (I feel the Coens wincing) that has surfaced sporadically in their work and always thrums beneath the surface.

That’s a controversial claim, when it comes to filmmakers who have carefully presented themselves as canny craftsmen (I’ve noticed that, in conversation, the Coens always say “movies,” and never “films”) and strenuously avoid aesthetic or theoretical lingo. But let’s back up to safer terrain, for now. I can say clearly that “Inside Llewyn Davis” is a shaggy-dog parable – actually, a shaggy-cat parable – about the troubled relationship between art and commerce, that’s loaded with colorful supporting characters and bits of hilarious business. Oh, and music. We haven’t even talked about music. In a year that includes both “20 Feet From Stardom” and “Muscle Shoals,” two of the best pop-music documentaries of recent memory, “Inside Llewyn Davis” still might be the music movie of 2013.

Indeed, “Inside Llewyn Davis” is in some ways a companion piece or incestuous sibling to the Coens’ 2000 “O Brother, Where Art Thou?” Both movies seek to capture a crucial moment or turning point in the history of American popular music, both are collaborations between the Coens and songwriter-producer T Bone Burnett, and both – teeny spoiler! – contain explicit references to “The Odyssey.” (This movie, however, does not give Homer a screen credit, as “O Brother” did.) Isaac, whom you may have seen in “Robin Hood,” “Sucker Punch,” “Drive” or “W.E.,” finally gets his shot at a leading role and makes the most of it, as the sardonic and self-destructive title character, who is haunted by losses that are more alluded to than underlined. (While it’s true that “Inside Llewyn Davis” is less plot-driven than most Coen movies, it’s one of their subtlest screenplays.) Isaac sings and plays several traditional folk numbers live in the film, beginning with “Hang Me, Oh Hang Me” in the very first scene. As the Coens both observed in my conversation with them, it’s amazing that they found an actor who was perfect for the role and also performs so beautifully, somehow conveying that Llewyn is a little too self-aware – or maybe self-aware in the wrong way – to make a living this way.

Llewyn was once part of a duo who never made it out of the Village, and now he’s a solo artist signed to a dead-end label run by a penny-pinching geriatric who never pays him anything. (This is a not-very-respectful portrait of the legendary Moe Asch, founder and proprietor of Folkways Records.) “Inside Llewyn Davis” is, of course, the name of Llewyn’s non-selling new album. (The fake album art, here and throughout the film, is brilliant – less parodic than spot-on accurate.) But Llewyn also strikes me as a character who’s been teleported backward from the 21st century, an irony-burdened hipster who has great difficulty adjusting to the sincerity and upbeat attitude of the Camelot era. In the movie’s funniest musical sequence, he sings harmony and plays guitar for a recording session of a novelty song about the space program – “Please, Mr. Kennedy! (Uh oh!) Please don’t send me into outer space!” – written by his clean-cut but vastly less talented friend Jim (a lovely supporting turn from Timberlake). Llewyn signs away his royalty rights in the session in order to get paid $200 upfront, and you want to jump up on-screen and grab him: “You dumbass! Can’t you tell a hit when you hear it?” But he can’t, of course – that’s what makes him who he is.

“Inside Llewyn Davis” takes place in the winter of 1961, which happens to be when a young folksinger from the Coens’ home state of Minnesota, formerly named Zimmerman, made it to New York. Despite the Welsh connection between their names, Llewyn definitely isn’t Dylan. He’s somewhat closer to the far less successful Dave Van Ronk, who shared his purist repertoire, working-class New York roots and penniless lifestyle. (Van Ronk’s memoir, “The Mayor of MacDougal Street,” is a major source for the Coens, although this is a fictional story, and they’ve made clear that Llewyn is not directly based on Van Ronk.)

I’m sure folk-music buffs will have fun identifying the locations and the not-so-veiled historical figures, including the angelic singer-songwriter played by Stark Sands who’s also a U.S. Army enlisted man (pretty close to the real-life Tom Paxton) and the garrulous Chicago club owner and manager who’s intent on making the burgeoning folk craze pay off. (That would be the notorious but brilliant Albert Grossman, called Bud Grossman in the movie and played by F. Murray Abraham.) But as with “O Brother,” no musicological degree is required to appreciate this amazing evocation of a vanished New York and a vanished America, captured in the misty, magical blue-gray images of French cinematographer Bruno Delbonnel. (Yes! The Coens have parted ways with Roger Deakins, at least for now.)

Carey Mulligan has one of her best recent roles as Jean, the embittered and foulmouthed wife of Timberlake’s Jim, who to her immense regret has also gotten tangled up with Llewyn. John Goodman appears in his most diabolical mode – duh! It’s a Coens movie! – as a dark-hearted junkie jazz musician who embarks on an increasingly allegorical road trip with Llewyn and a monosyllabic, Kerouac-style beat poet played by Garrett Hedlund. This trio, along with a cat who may or may not be Llewyn’s spirit-companion, are officially going from New York to Chicago, where Llewyn hopes to beard Bud Grossman in his den. But the journey gets fuzzier and more numinous as it goes along, taking in such spectral spaces as an all-night diner seemingly suspended above a highway and a mist-shrouded roadside ditch. Llewyn arrives at several forks in his life’s journey, including the decision about whether to abandon the cat and whether to take the turnoff to Akron.

“Inside Llewyn Davis” turns in a circle and ends almost exactly where it begins. To issue a reassuring spoiler, the cat cheats death, and one could say the same of Llewyn himself. Like just a few other Coen movies – “A Serious Man” and “Barton Fink” and maybe “The Big Lebowski” or “The Man Who Wasn’t There” – it belongs to the category David Lynch has described as “movies that make you dream,” and I know that because I had vivid dreams about it after watching it again. The scenes I dreamed up (some incoherent nonsense involving a glowing, radioactive package) aren’t in the movie, but it does have a strange glow at its heart, and if you can ride along with its unlovable but suffering hero – who certainly receives his just deserts and more – it may be the saddest, sweetest, most beautiful and most tragic work of art these great American filmmakers (sorry, moviemakers) have crafted yet.

”Inside Llewyn Davis” is now playing in New York and Los Angeles, with national release to begin Dec. 20.