10 metal tracks even non-metal-heads will love

Metal has a bad rep, but these songs will show you there's more to it than screaming 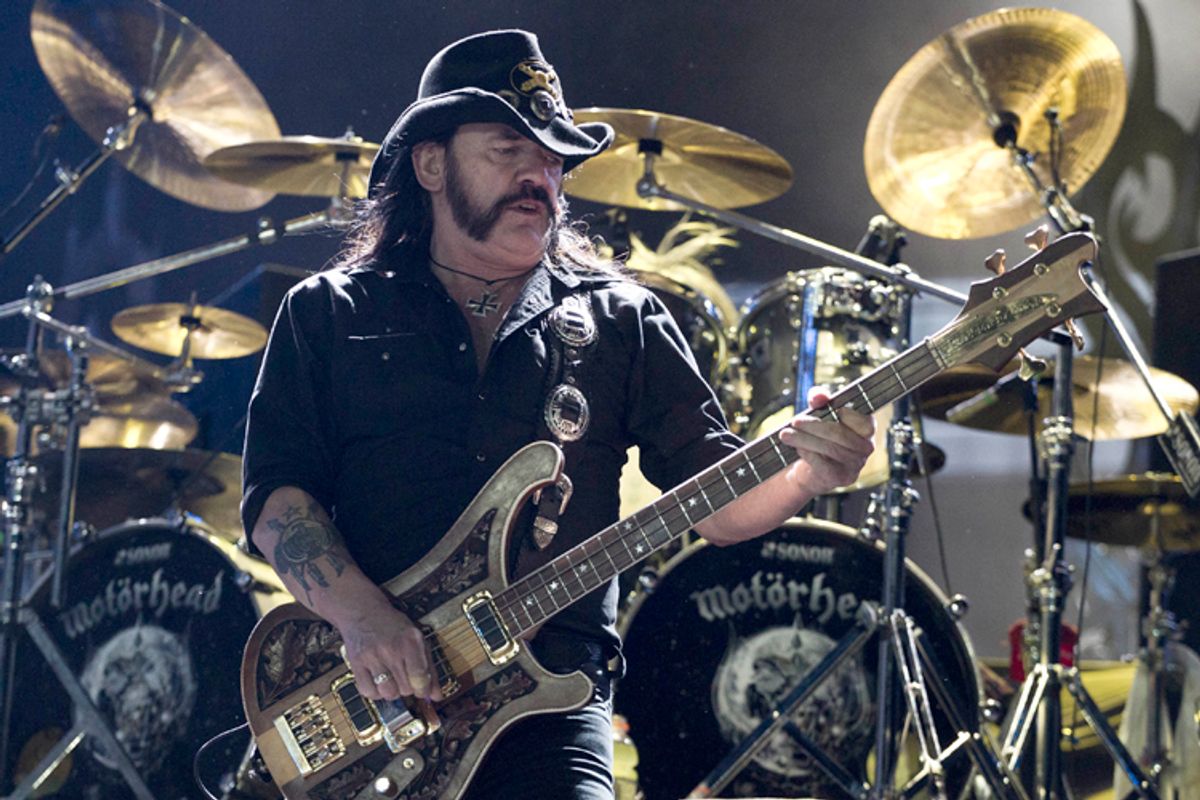 Metal after the early eighties, whether thrash, death, doom or black,  is the embarrassing corpse moldering over there in the corner at the pop music feast — the slavering funkless abomination that should-not-be, on the radio or anywhere else. For most non-initiates, it provokes bemusement, horror and the occasional blast of blandly obfuscatory mainstream media exotification. But despite its bad rep, the truth is that there's more to metal than gargled vocals, ear-splitting cacophony, and dicey politics. Here then are ten metal tracks for the non-metal-head. Listen and decay — but accessibly.

Even people who hate metal are not allowed to dislike Motorhead. Lemmy's snotty swagger is a scuzzily virile antidote to his many successors' humorless asexual bellowing. Motorhead is in a lot of ways as much punk as metal, as this particular 1991 track from the album "1916" makes clear. The two bands were friends and mutual admirers, and Lemmy captures the Ramones' particular stoopid smarts without losing hold of his own feral charisma. If you can avoid head-banging to this, you have no head-banging in you. If you have somehow never had Motorhead in your life before, you also owe it to yourself to check out "Ace of Spades."

Where thrash and hardcore meet, you get grindcore — and especially Napalm Death's classic 1987 album "Scum."  "Instinct of Survival" has that hardcore ranting speed and political charge ("Multinational corporations/genocide of the starving nations" is what he's screaming there if you can't make it out) coupled to clotted metal guitars and Nik Napalm singing as if he's trying to gargle bone chips. Perfect for those who like metal's rage but dislike its prog bloat.

The Brazilian thrash band Sepultura eventually went on to create a metal/world-music hybrid which I unfortunately can't quite endorse. At the time of 1993's "Chaos A.D.," though, they'd just begun to work with more rhythmic drumming styles. The result is still fiercely metal, but with a swagger and even a swing that gives the anti-war lyrics an enormous rush, like being pummelled with an almost but not quite funky jackhammer. I love Metallica and Slayer, but for those who find their deliberate soullessness wimpy rather than demonic, "Territory" may yet win you over.

Autopsy, "Hole in the Head"

Autopsy's 1991 "Mental Funeral" is one gonad-pulverizing, detuned slogging hook after another, the warped prog of early Heavy Metal slowed down and tied in massive knots. Listening to it is like watching an anaconda experience a series of brain trauma events. Every metal band loves Black Sabbath, but few turn that love to such faithful and bizarre ends. If you can appreciate Ozzy but are less certain about his heirs, Autopsy is a good entry point to the rest of death and doom.

Seattle sludge pre-grunge legends, the Melvins are uncategorizable; a deranged cross between Kiss, the Velvet Underground and a brontosaurus. "Honey Bucket" is from their 1993 major label debut, when someone somewhere thought for half a second that this band might get some of that alterna-90s chart action. No fear of that, but this song shows why Cobain worshipped them (and produced a good chunk of this album.) The hook could come off a Nirvana song, but the tight changes, King Buzzo's garbled vocals and most of all Dale Crover's limber, mastodon-stunning drums are inimitable.

As is not uncommon for black metal, the Ukrainian band Drudkh's political commitments are unsavory while their music is surprisingly indie-art, and even world-music friendly. "Glare of Autumn," from their 2004 "Autumn Aurora," opens with an acoustic folk intro before launching into a complex layered drone, somewhere between Sonic Youth and Sigur Ros if either of those bands dabbled in traditional melodies. All Drudkh albums are worth checking out, including their all-acoustic effort, "Songs of Grief and Solitude."

One of the not-so-secret secrets of doom/drone metal is that it might as well be a soothing balm for tranced-out hippies. Om is almost a parodic illustration of the point — "Pilgrimage", from the 2007 album of the same name, sounds for all the world like a more leisurely Pink Floyd circa "More" or "Meddle." The perfect soundtrack for drifting gently off to sleep on a swaying caravan, and/or for smoking until you can't feel your toes.

Botanist, "A Rose From the Dead"

Black metal about eco-apocalypse performed on hammered dulcimer amidst the vines of demon plants. Botanist channels some of the fey dread of Comus or the Incredible String Band, the bleak netherside to Om's feel-good hippie trance. This track is from his 2011 album of the same name, but all Botanist's releases are worth checking out.

Necro Deathmort is a goof of sorts — a side-project by winking UK electronica dubstep duo A.J. Cookson and Matthew Rozeik that produced one 2010 album titled "The Beat Is Necrotronic." The joke is that it's not really a joke; "Origami Werewolf's" scruffy, heavy layered, echoey drone functions perfectly as actual honest-to-goodness metal — a cavernous digitized nightmare in which ear-shattering grime of all genres can have commerce together.

Italian symphonic power metal band Rhapsody gives you a sense of what would have happened if Queen had decided to make music for Renaissance Fairs. "Legendary Tales," their 1997 album, is toweringly preposterous, from the Dungeons and Dragons cover art to the song titles ("Forest of Unicorns" is maybe the best.) "Warrior of Ice" is typical — ridiculously intricate arrangements, full choral vocals, classical violin passages and Fabio Lione going from full-out inspirational wail to earnest emotion-vibrating soto voce. Probably not really for classical aficionados, but fans of musical theater or absurd bombast should find a lot to love. (Rhapsody has now changed their name to Rhapsody of Fire because of course they have.)