Dolphins aren't as special as you think 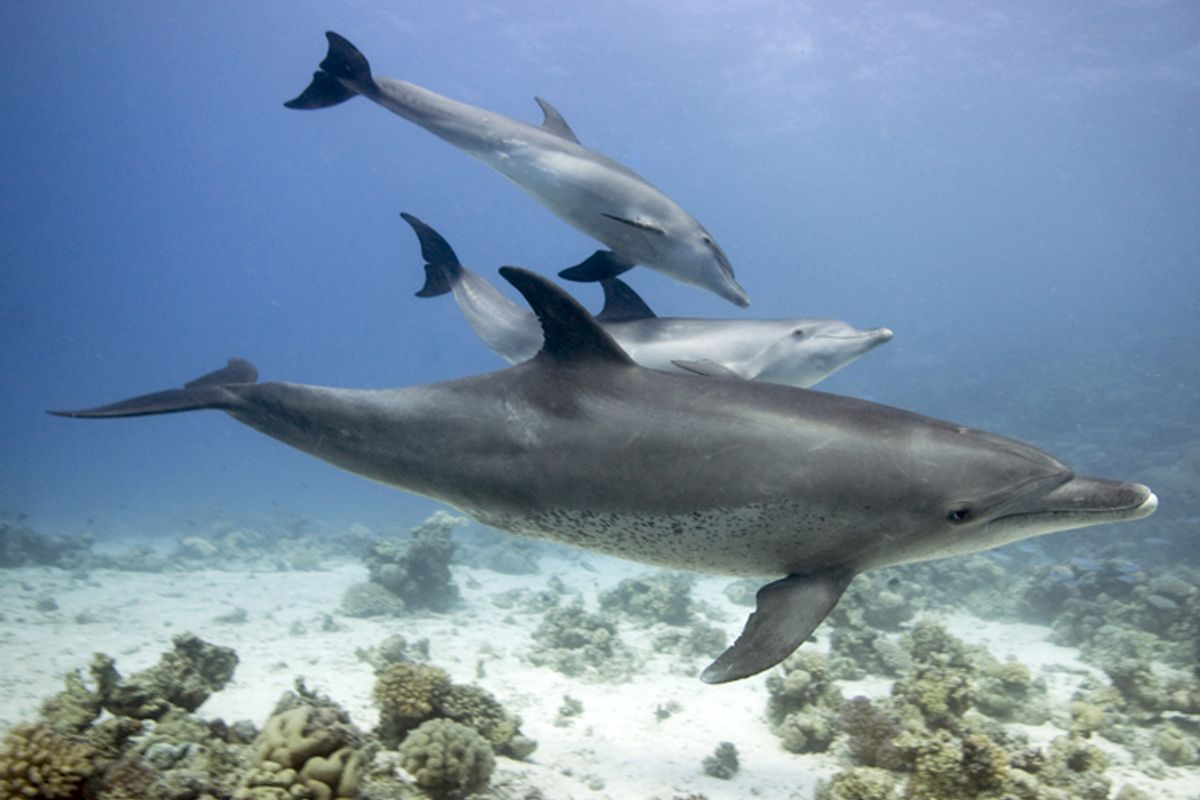 A necessary disclaimer right off the bat: No one's denying that dolphins are cool, and smart, and even special. To suggest otherwise is to step into extremely controversial territory, as Justin Gregg, a researcher with the Dolphin Communication Project, found out earlier this year.

"Dolphins are fascinating in their own right, but in terms of intelligence they are nowhere near as special as they have been portrayed,” Gregg told The Sunday Times in an interview teasing his new book, "Are Dolphins Really Smart?" (out this month). Somehow, that got translated into this:

"Not only are dolphins dimmer than the average chicken, says Justin Gregg, a zoologist, but they are also capable of gang rape and acts of violence. So don’t be taken in by those winning smiles."

Unsurprisingly, given dolphins' near-universal popularity, people got upset. And for the record: no, they're not dumber than chickens; no, they're not rapists; but yes, they, like most animals, can be violent. And while they're smart, said Gregg, it doesn't make much sense to call them the "second-most intelligent species." It's also highly unlikely that they communicate in a language called "dolphinese" — at least, not as linguists would define it. And they probably don't have psychic abilities (although you should never say never).

Gregg spoke with Salon about dolphin smarts, dolphin aggression and the legal basis of dolphin personhood.  This interview has been lightly edited for length and clarity.

We’re doing this interview over email instead of the phone because some of your comments were seriously misconstrued by the press — people were very upset about the idea that dolphins might not be as smart as we think. But that’s not quite what your books argues. Instead, it seems like the popular imagination just tends to get carried away when it comes to dolphins. What would you say is the most important thing for readers to understand about dolphin intelligence?

Much as their reputation suggests, dolphins are intelligent in ways that we typically associate with some of the more intelligent primates (like chimpanzees) or corvids (e.g., crows, ravens). But it’s not enough to just say that they are intelligent and leave the idea unexplored. Once you start looking at the details about how dolphins’ minds work, and what exactly scientists know about dolphin cognition, things get a lot less clear. Once you go down the rabbit hole, the idea that dolphins occupy a special place at the far end of the continuum of animal intelligence doesn’t seem like the right way to think about the issue.

This is because there is something deeply flawed about making comparisons between different species under the guise of ranking their intelligence. Usually this means comparing all animals to humans, which is a very unscientific thing to do – there is no reason why human intelligence should be the model against which all other species’ cognitive traits are compared. While it is true that dolphins display a number of behaviors and cognitive traits we typically associate with more intelligent primates (especially in the realms of social cognition and symbol comprehension), a large number of other species that we don’t typically consider very intelligent are also displaying these skills.

The question of why dolphins evolved their big brains, complex societies and complex social cognition that so resembles that of primates is important from a scientific point of view, although it need not be related to the idea of “intelligence” at all. Who’s to say that behaving like a primate is the truest mark of intelligence in the first place? If the ability to fly were used as the benchmark for intelligence, both humans and dolphins would be dunces, and albatrosses — which can stay airborne for weeks at a time — would be the geniuses of the animal kingdom.

Are there any skills that dolphins are particularly good at?

As I noted, dolphins are quite skilled when it comes to tasks involving social cognition and the ability to comprehend symbols in an experimental setting. Like elephants, the great apes and magpies, dolphins pass the mirror self-recognition test, which suggests that they have some form of self-awareness. Unlike most non-domesticated animal species, dolphins are able to understand the human pointing gesture, which suggests that they might have some understanding of what is going on inside a human’s head when they point to something. In Lou Herman’s work with his language-trained dolphins, we saw that dolphins are able to comprehend sentences up to five symbols long, and spontaneously understand the meaning of novel sentences they’ve never heard before involving novel combinations of symbols. This is a skill that is very rare in the animal kingdom. They’ve also displayed what looks like insight problem solving skills in experimental contexts. Dolphins also live in extremely complex societies where they need to keep track of an ever-changing series of alliances and friendships. These complex kinds of societies are rare in the animal kingdom.

You conclude that “there’s no evidence to suggest that dolphins communicate by transmitting three-dimensional holograms via their echolocation or have psychic abilities.” What’s driving such outrageous misconceptions?

It’s actually not that farfetched to think that a dolphin could transmit useful information via its outgoing echolocation clicks that another dolphin could listen to and receive as a kind of mental image. This was an idea that John Lilly presented decades ago. And our organization [the Dolphin Communication Project] receives a few emails a year from people who — independently — come up with this idea and suggest it as a possible means by which dolphins communicate. The way echolocation works, it’s entirely reasonable to think that this could work. As I noted in the book however, It does not appear that dolphins are manipulating their outgoing clicks in this way. So it more than likely does not happen.

As for psychic abilities — that’s a whole can of worms. As far as mainstream science goes (and I consider myself a mainstream scientist) the evidence for psychic abilities in any animal (dolphins or humans) is extremely weak to the point of being extremely unlikely to exist. As a scientist, you can never say for sure that something doesn’t exist though.

What other misconceptions do you often come across?

I mention in the book that there is a common misconception that dolphins are always friendly and peaceful animals. They are, in fact, not always friendly with each other, and exhibit a mixture of aggressive and friendly behavior — which is what you would expect of a socially complex animal that lives in complex social groups. It is also not the case that dolphins are always friendly and gentle when it comes to their interactions with humans. Dolphins are extremely curious, and there are many cases of wild dolphins befriending humans and interacting with them in a friendly manner. But there are also cases of dolphins acting aggressively toward humans in the wild.

You also acknowledge that a lot of the evidence about dolphin intelligence is equivocal. What sort of “proof” would be needed to say for sure how much dolphins are capable of knowing and understanding?

This all depends on what aspects of “intelligence” you are investigating. When it comes to basic cognitive traits — like the ability to discriminate between different colors — there are simple experiments that show unequivocally whether a dolphin (or other nonhuman animal) can see, for example, the color red. But when it gets into really tricky concepts like “consciousness,” there are no simple and elegant tests that help us determine the extent to which different animals experience consciousness. For these trickier concepts, including consciousness, self-awareness and experiencing of emotions, you will find a lot of disagreement between scientists as to what the evidence is telling us about animal minds. It might be the case that for these complex kinds of mental properties, we might never have experimental tests that show unequivocally what is going on inside animal minds. The scientific literature is filled with conflict on these points.

The Nonhuman Rights Project just filed a lawsuit seeking personhood for chimps, arguing that they’re “autonomous, self-determined, self-aware, intelligent and emotionally complex” beings who cognitively “resemble human beings.” Is this something that could be said for dolphins, too?

Yes, based on my reading of the kind of scientific evidence the Nonhuman Rights Project are referring to when arguing their case for “practical autonomy” in chimpanzees, it would appear that dolphins would also fit the bill.

Where do you stand on the personhood question, so far as dolphins are concerned?

I mention a number of different animal rights and welfare approaches in my book and outline their relationship to the science of dolphin cognition, but am very careful not to take a stand in support of one or the other. My book is an impartial overview of the science, and I do not adopt any advocacy stance whatsoever.

Unlike most of us, you’ve spent a lot of time interacting with dolphins and studying their behavior. How much of what’s commonly believed about them have you observed in your own experience?

Dolphins are extremely charismatic and playful animals. And they are indeed very curious of humans and often approach, interact and play with human swimmers (and researchers) in the wild. So when it comes to dolphins as curious and charming megafauna that are a lot of fun to be around, I think that’s an undeniable reality.