The real Mandela vs. the movie version

Harvey Weinstein's Mandela biopic suddenly seems significant, but the real story is way too much for Hollywood 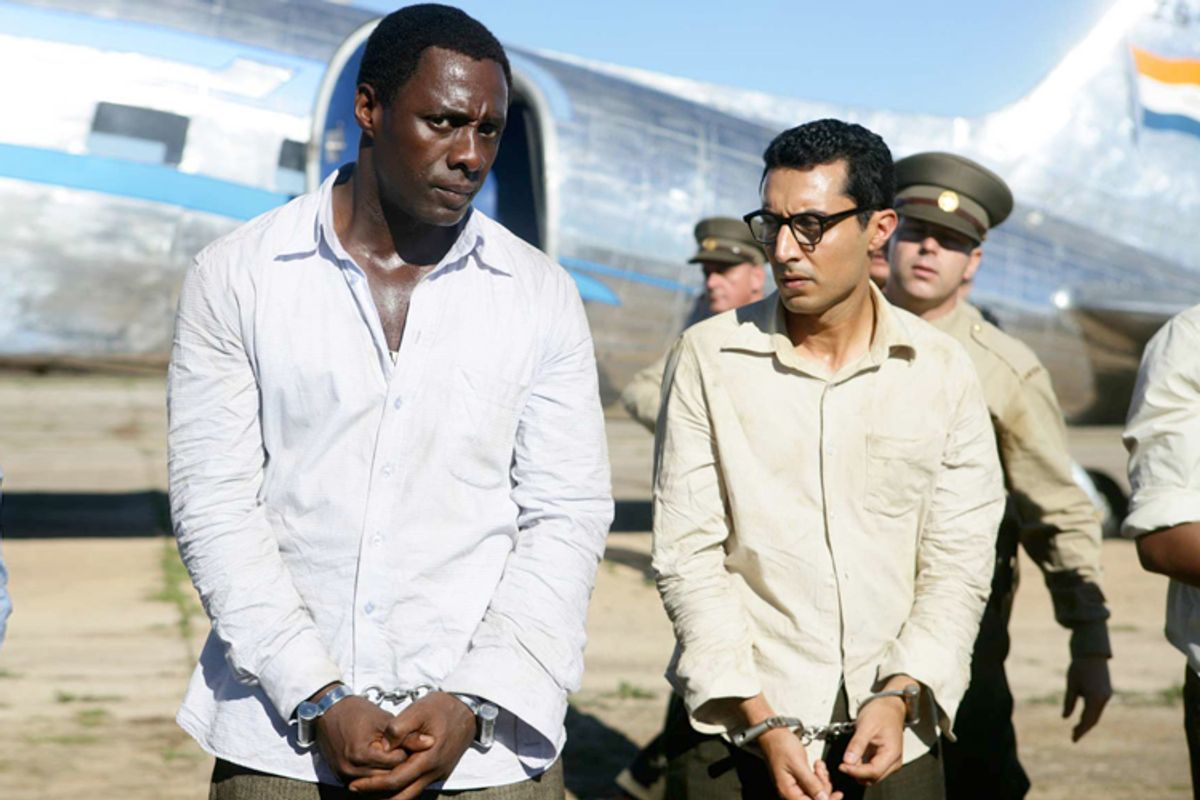 Nikki Finke, the veteran Hollywood reporter and blogger who founded Deadline.com (and was recently driven out by the site’s owner), got in Internet-trouble this week for tweeting about the death of Nelson Mandela and immediately linking it to “awards buzz” around the Weinstein Co. film “Mandela: Long Walk to Freedom.” That was an idiotic thing to say in public, but no one who knows Finke — or has ever read her work — could have been surprised to learn that she lacks social graces and has a totally blinkered, movie-centric view of the world. Her real sin, in fact, was to articulate what everyone else in and around the film industry was thinking, but was too polite to say out loud: Boy oh boy, Harvey Weinstein has done it again!

This drive to think small, to think in terms of short-term, instrumental results — to capture the swirling contradictions of history in a teacup, or at least in a two-hour movie with awards buzz — is characteristic of our age, and not limited to Harvey Weinstein and Nikki Finke. (Indeed, I would never accuse Harvey Weinstein of thinking small.) We yearn for the tl;dr version of everything, the quick and canny summary; we yearn to understand history before its meanings have begun to settle, and in some sense before it has even happened. All Finke did was frame this desire in a way that struck many people as overly abrupt, or poorly measured. No, we don’t actually know what Mandela’s life, or death, means, because we can’t know that. But we know what it means for the Oscar race!

Thousands or millions of words have been written about Nelson Mandela this week, with more to come, and the best way to avoid empty fanfare is probably to say: Yes, he was clearly one of the most important political figures of our time, and led a remarkable life. But we can only make guesses about the long-term consequences and historical legacy of his extraordinary career, which is open to many readings and conflicting interpretations. Today we look for a one-sentence message of inspiration and uplift, because that’s the natural impulse when a human life has reached its end. Those who come along later, when the rest of us are dead too, may put the picture together quite differently than we do now.

As Joan Walsh has pointed out, it’s ludicrous that contemporary American right-wingers like Sen. Ted Cruz feel obligated to say nice things about Mandela now that he’s dead. Cruz’s immediate forebears in the loony-tunes, Birchian branch of the conservative movement, including Dick Cheney, the entire Reagan administration and the neocon circle around National Review, supported the South African apartheid regime right to the bitter end and consistently portrayed Mandela as a terrorist, a communist sympathizer and a dangerous anti-American revolutionary. Furthermore, it’s a diagnosis that’s at least partly accurate, depending on what you think “terrorist” means, and with the proviso that Mandela made strategic alliances with communists but always opposed both their ideology and their domineering style. The irate Tea Partyers posting on Cruz’s Facebook page actually have a point: If Cruz had a shred of integrity, he’d stick to denouncing Mandela or simply shut the hell up.

As for the inert, semi-hagiographic portrait delivered in “Mandela: Long Walk to Freedom,” with the great British actor Idris Elba boxed into a thankless role, that’s just as ideological in its own way as the right wing’s long-running cartoon version. While the movie is handsome to look at and offers the requisite inspiring episodes at regular intervals — Elba is especially stirring delivering Mandela’s 1964 courtroom speech, during the trial that could easily have led to his execution — its desire to pack everything in leaves you with the curious sensation that everything important has been left out.

We glimpse Mandela in stages as an idealistic young lawyer, an armed revolutionary, a political prisoner, a husband in an irreparably damaged marriage and a senior statesman who repudiates violence and leads his nation into democracy. But there’s little or no sense of how those shifts occurred, unless perhaps through superior force of personality or the agency of the Almighty. Although the movie is based on Mandela’s 1994 autobiography, it’s been reprocessed by William Nicholson, the screenwriter of “Les Misérables” and “Gladiator,” which may tell you everything you need to know. This is the authorized, Western liberal-consensus version of the story, in which a Great Man decides that violence is bad, while those of us out in middle-class audience-land nod along in contented agreement.

Just to be clear, I’m not suggesting that Harvey Weinstein invested all this time, money and care into an impressively staged Mandela biopic for cynical reasons. The secret to being Harvey Weinstein is that he believes passionately in everything he does; he is always shrewd, but almost never cynical. But the man has a justified reputation as a bona fide marketing genius, and it did not escape his attention that he was making a movie about a world-historical personage who was in his mid-90s and in declining health. Much of the film’s highlight-reel character — it feels like a combination of tribute album, historical montage and refresher course — makes sense only in that light.

When I first saw “Mandela: Long Walk to Freedom,” which is directed by Justin Chadwick (of “The Other Boleyn Girl” and loads of British television), I had the naïve reaction of wondering who this movie was supposed to be for. Those who actually knew something about South African politics and history (or who had read Mandela’s terrific book) would find it slight and superficial, and those who didn’t presumably wouldn’t be interested in the first place. Now, of course, everyone is interested, and this honorable, conventional and fundamentally unchallenging telling of the Mandela saga makes the perfect universal catch-up. I’m not even saying it’s a bad movie; it’s probably a good one, in Harvey Weinstein terms, meaning that it’ll fuel lots of earnest holiday-season family conversations.

Chadwick and Nicholson’s Mandela movie, one might say, contains the unsatisfying early drafts of several better Mandela movies that may someday be made. Our desire to narrativize history while we’re in the middle of it is understandable, but doomed. It took almost 150 years after the death of Abraham Lincoln to reach the point where Tony Kushner and Steven Spielberg could make “Lincoln,” and the legacy of the Civil War and Lincoln’s unfinished business still hangs over America like an ancient curse. It was only a little longer than that between the death of the real-life King Henry V, around 1422, and the Shakespeare play that immortalized him as the embodiment of English nationalism. In both cases — and I’ll bet anything Kushner thought about the Shakespearean model — the dramatist focused on one key incident, a victory that illustrated both a person’s character and his historical importance. And in both stories a historical irony is invoked that is not available to us when it comes to Mandela. Lincoln and his contemporaries only dimly understood that the end of slavery was the beginning of a much longer struggle, and the closing chorus of “Henry V” famously observes that Henry’s victory over France was soon undone and his successors “made his England bleed.”

I’d definitely want to see the Mandela movie that focused on his career as an idealistic young lawyer who finally realizes that fighting white supremacy within the bounds of pre-apartheid South Africa’s justice system simply won't work, and then the one about his turn to revolutionary violence and his underground career as the “Black Pimpernel,” head of Umkhonto we Sizwe (“Spear of the Nation”), the armed wing of the African National Congress. Unsurprisingly, Chadwick’s film skips lightly over the whole period when Mandela was closely allied with Marxist and/or anti-colonial revolutionaries all over the world, from sub-Saharan Africa to Palestine to Latin America to Northern Ireland. The only reason Mandela never crossed paths with Che Guevara, or for that matter with Carlos the Jackal, is that he had already begun his 27-year incarceration by the time those two rose to international prominence.

“Mandela: Long Walk to Freedom” is largely focused on what might be called the human-interest story of Mandela’s life in the notorious prison camp on Robben Island, where he gradually carved out more tolerable conditions for the black inmates and became friendly with at least one of his white guards. Commendably, the film does not try to make a hero out of the cryptic F.W. de Klerk (Gys de Villiers), South Africa’s last white president, who apparently believed he had been selected by God to end apartheid, but more to the point found himself in a historical dilemma where God left him no other choice. After all those years in prison, Mandela appeared to de Klerk and the rest of the white leadership as a salvific and almost Christlike figure who could save them from widespread dispossession or a murderous purge at the hands of the embittered black majority.

These are undoubtedly the most interesting scenes in “Mandela: Long Walk to Freedom,” and the ones that one hopes will exercise the imaginations of South Africa’s future Shakespeares. Madiba, as he was known to millions of Africans, took it upon himself to negotiate in secret, in the poshest suburbs of Johannesburg, with the military and intelligence leaders of the apartheid regime – precisely the people who were staging deadly raids in the townships and beating young men to death in secret prisons. The moral enigma here is tremendous: Did Mandela have the right to do this in the first place? And was he right to leave much of the white power structure in place, during and after the democratic transition? Was another pathway possible, and would it have been better? These are painful and complicated historical questions to which none of us alive today will ever know the answers. (Lincoln, similarly, decided not to try leading Confederates as war criminals, or to dispossess Southern planters of their lands; the result was a rapid end to Reconstruction and 80 years of Jim Crow.)

Nicholson’s screenplay, and to some degree Mandela’s own autobiography, rely on truisms about a liberated people not lowering themselves to the level of their oppressors, and about how political leadership requires making unpopular choices because they’re right. Those are fine words, and there may be some truth to them; my own conclusion is that Mandela, like Abe Lincoln and Henry V in their own day, was driven forward by historical processes he could not control, and that he too will look different through the long lens of historical irony. Like Martin Luther King, another contentious leader who has been dramatized often but never especially well, Mandela is doomed to a long afterlife as a secular saint or national avatar, whose reality is difficult to see through the glare of beatitude. I don’t entirely blame Nikki Finke for focusing on questions we can understand. Awards buzz? Sure, I guess; but the real Mandela movie is still unwritten.