What John Lennon taught me about justice

Lennon knew you couldn't fix our broken system from within. Now, his radical lesson feels more true than ever 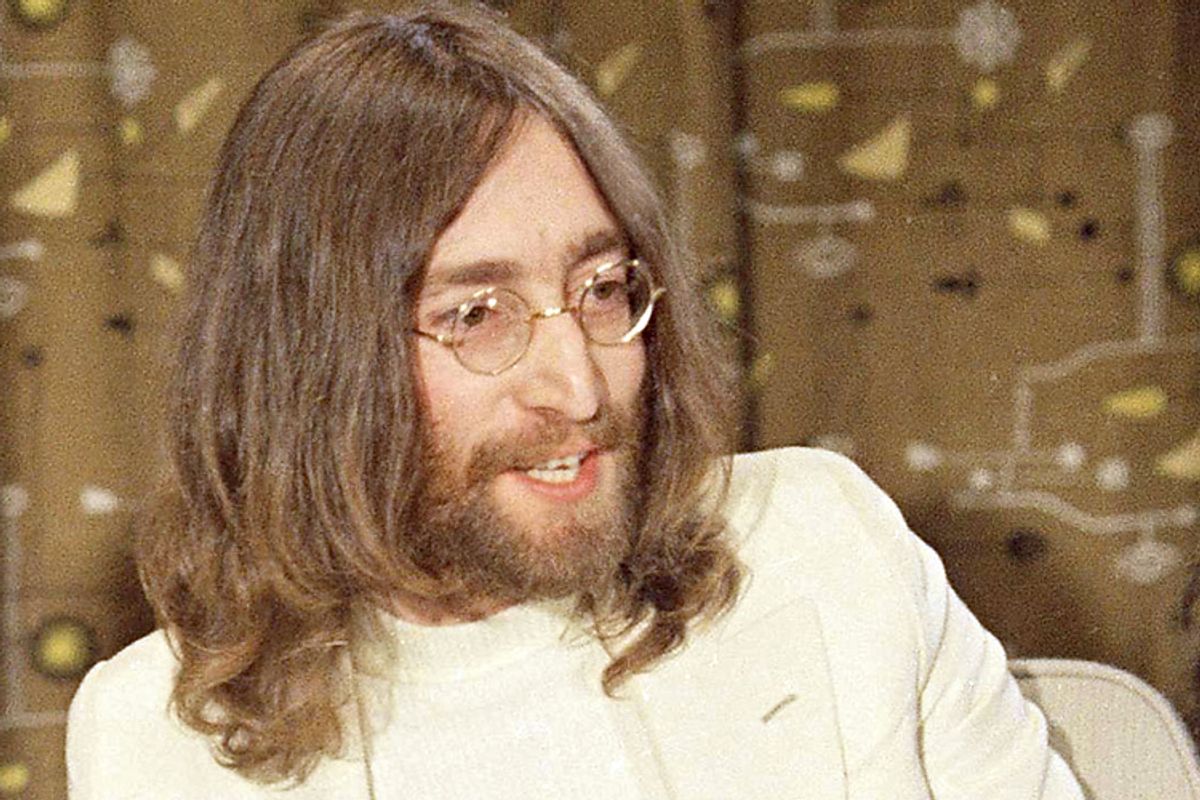 It was Dec. 8, 1980 and John Lennon was shot in the back outside The Dakota in New York City with four bullets fired from a .38 Special. Lennon lost 80 percent of his blood and was declared dead at 11:15 p.m. — 10:15 p.m. where we were in the Midwest at the University of Illinois in Champaign-Urbana.

I was in a couple of friends’ dorm room, girls I knew from grade school. The Doors first album was on the turntable. The song playing, "Break On Through."

I won’t say canned beer and bong hits were not involved.

Dec. 8 is also the birthday of Doors front man Jim Morrison, and that’s what we had gathered that night to celebrate. "No One Here Gets Out Alive," the first biography of Morrison, was published that year and I had just finished reading it. Regarding Jim and The Doors, I was deep in.

The RA burst into the room and broke the news. John Lennon, dead.

We were stunned. Albums flipped around and the needle came down on "Let It Be." We stood in the cramped room, not knowing what to say or do. There was agitation and, for me, the need to run. I’d been running since I was 14, five to eight miles a day several days a week, in addition to walking all over hell and taking three dance classes a week. I was spring-loaded and high. I needed out.

In that dorm room that night, in addition to the girls, there was one guy. We’ll call him Bob. Bob was 21. A friend met Bob at a party, said he had weed, and gave me his number. I called him up. He came to my house and sold me some pot. (Don’t do this, kids.) It was four months later and he was a boyfriend now. He called his roommate, who appeared at the dorm in short order and made the cans of spray paint appear.

We ran out into the December night. I wore my standard uniform of that time, my mom’s old canvas WWII flight jacket, Frye boots, and boys’ 501s, straight leg.  As the first paint flew, I broke off from the group to run and feel my open jacket flapping and hear my boots connecting with the concrete. Their voices were behind me in bursts and in trailed laughter.

With half the quad between me and the group, I painted "Let It Be" in black on a diagonal walk not far from the student union. It wasn’t big and sloppy. It was tidy and neat, all caps, along the edge of a square of sidewalk bordering lawn.

It was vandalism, and politics, and a touch of rage, rage against the dying of the light. The vigil on campus the next day was about silence, not rage. Still, it was a protest, not about gun control or crime, but a protest of the senseless destruction of good.

I was eighteen. Ronald Reagan had just been elected and John Lennon had just been murdered. Being born into the ‘60s and coming of age in the ‘70s left us tail-end bottom-of-the-baby-boomers ill-prepared for the America to come.

It was in 1966 that Lennon made the infamous remark that The Beatles were “more popular than Jesus.” Although the quote was taken greatly out of context, it was also true. Lennon was talking about young people in the original quote and the fact was that kids weren’t pressed up screaming against the Church of England’s doors. In the same quote he also said, “Jesus was all right but his disciples were thick and ordinary. It’s them twisting it that ruins it for me” – a common sentiment when it comes to organized religion and the inevitable self-serving dynamics of institutions.

What Lennon said about Jesus is increasingly easy to say about values such as “freedom,” “liberty” or “security” in America. People believe in these words, but are alienated by the disciples and their institutions that have corrupted these words and divorced them from their value. At a press conference, Lennon said about his remarks, “I’m not anti-Christ or anti-religion or anti-God. I’m not saying we’re better or greater, or comparing us with Jesus Christ as a person, or God as a thing.” All Lennon had done was make an observation and spoken a truth that authority would prefer to not be true, or at least not have you know.

When it comes to religious authority, truth opposed to doctrine is taboo. In some places, it can be a death sentence.  When it comes to the authority of the state, in America, truths undermining prevailing authority send the whistle blowers on the lam, or into prisons. Given provisions of the National Defense Authorization Act (NDAA), even listening to such truths can make one an enemy of the state, detained without charges. When preserving the economic and political power structure comes to be defined as “national interests,” real change is treasonous.

John Lennon didn’t fight the system. He didn’t try to get It to change. He stood on a separate platform and said to give peace a chance — a fluffy, hippie sentiment. Yet, if the sentiment were to be undertaken in concrete terms, the current political-economic system would collapse.

Which is why John Lennon was a radical.

Radicals, whether on the left or the right, are those who challenge the prevailing system itself and tend to have one of two agendas: 1) Destruction of the prevailing system or 2) the creation of an alternative system. They’re not interested in little “c” change. They don’t want different or “better” rules. They want a different game.

Lennon pursued the latter, a new game. He demonstrated how the pursuit of good is different than the fight against injustice.

But even radicals serve as fodder for the prevailing system in that they are useful, and utilized, by the incrementalists who often claim to share the radicals’ larger goals. The position of the radical is leveraged by the incrementalists to create of themselves the “reasonable ones” — meaning those seeking increased power, comfort or relief within the system, whether for themselves or others, without impacting the system’s overall power dynamics.

After more than twenty years in the political trenches, despite victories as well as defeats, I no longer believe the system can be changed from within or through incremental progress. Incrementalism protects the larger political-economic system from real change. The pace of social change is slow because it is held back until the time when the system can absorb the change without disrupting the flows of money and power. Or, the system wires itself around the change.

The triage politics that characterize much of liberal or progressive policy when it comes to social and governmental services, while important, doesn’t shift the underlying foundation of a fixed economic game. Incrementalism, which is the template for the march of social justice, fails to shift economic injustice even when it does shift cultural attitudes and thinking. One can’t deny the advances made by women, people of color and LBGT people over the last sixty years. However, even though the culture shifted and opportunities opened and discrimination was challenged, wealth has nonetheless consolidated to an extent that seems beyond our comprehension. And without economic justice, social justice efforts will always be handicapped in a system driven, calibrated, and shaped by money.

We have seen changes, but not Change. The changes make people believe in the possibility of progress despite the foundation that produces injustice remaining intact. The belief in that possibility keeps people in the game.

John Lennon stayed outside the system and the politics whose self-importance considers itself the only rational route to change and considers those who choose to sit politics out as ignorant and foolish. You don’t play the prevailing game? Then your voice, your vision, your vote (outside the system) doesn’t matter and doesn’t count.

I used to believe this myself.

But now, between campaign finance laws, surveillance and the role of government in serving Wall Street, it’s difficult to believe the system itself can be an instrument of justice. Money buys power that directs money to power to buy more power to accumulate more money that buys more power, and so on. It’s a self-reinforcing loop.

So, often of late, our political reality has me turning towards my roots — wanting to grab spray paint and run, with more faith in John and Yoko’s bed-in, hair peace and Imagine, than with a political system no longer able to function without corruption, as corruption is built into the system’s rules.

I walked past my spray-painted "Let It Be" for the next couple of years as the words weathered and faded. The mark survived the arrival of campus security that night. Friends got busted and were made to scrub walls.

But I got away, and so did Bob. Bob’s escape involved sliding under a parked car. I just ran like hell.

K.M Cholewa has worked as a political writer, policy consultant and lobbyist in Montana for 22 years, including on issues related to medical marijuana. Her novel, Shaking Out the Dead, is due out Spring 2014. Follow her on Twitter @katecac.