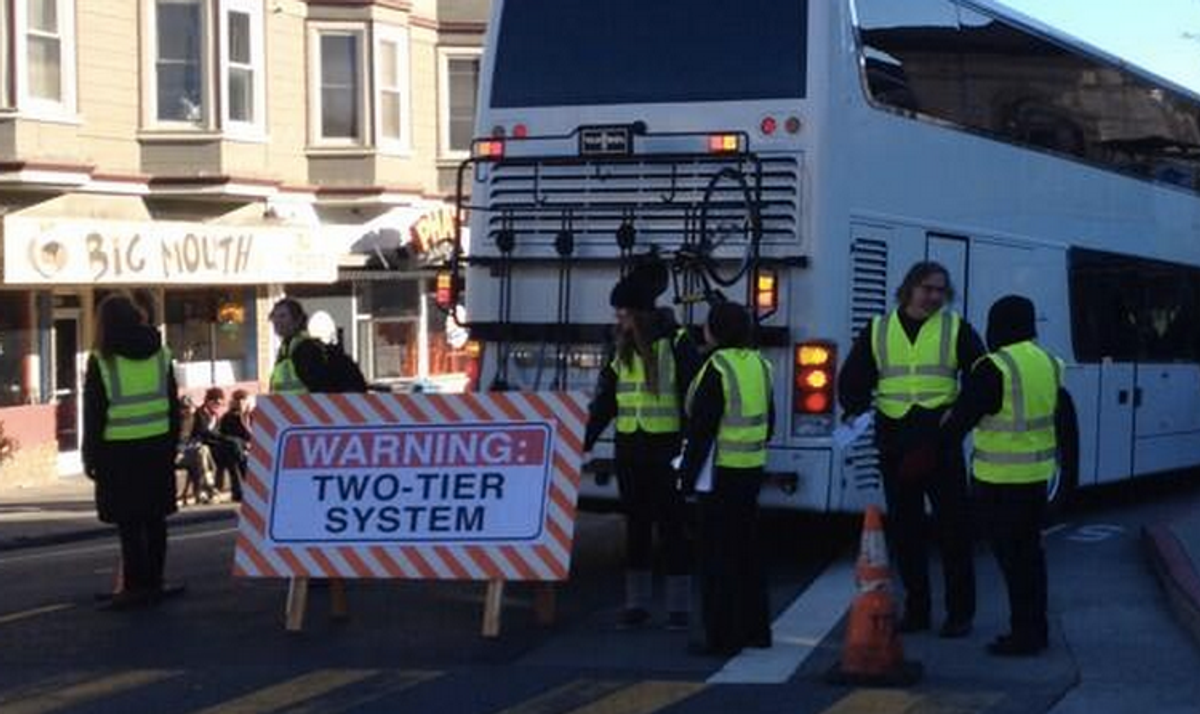 If you've had the misfortune of watching "The Internship" -- the most profound artifact of brand placement in cinema history -- you'll have been told that Google, and its ruling ideology of "Googliness," is nothing if not purportedly a warm and cozy vector of innovation, with its own internal, coddled ecosystem. For example: Vince Vaughan and Owen Wilson's dopey characters are ushered to and from the tech giant's headquarters in gleaming Google buses. How convenient for these good-hearted, hardworking Google-mongers.

But in the Bay Area, the Google bus -- the transportation system used to usher thousands of workers from their San Francisco homes to their Silicon Valley home-from-homes -- is a problematic symbol of inequality produced in the area by the tech boom and its high-earning progeny. Wealthy Google (and other tech company) workers have driven up rent prices to unlivable heights in San Francisco (and, increasingly, Oakland). While a beleaguered transport system supports the Bay Area's non-Googly population, Google workers with their own company buses needn't be burdened.

Defenders of the Google bus note that the system keeps thousands of cars off of Bay Area highways. But for poor public transit users and workers, the Google buses are a symbol of Silicon Valley's domination of San Francisco, devoid of commitment or investment in its public infrastructure.

Updated: A video captured at the protest sees a Google employee jump out of the blockaded bus to shout at a protester, "This is a city for the right people who can afford it. You can't afford it? You can leave. I'm sorry, get a better job."

Updated: According to fresh reports, the shouting Google employee caught in the above footage was in fact a protester plant. As the San Francisco Bay Chronicle reported:

Various tips have streamed in that this shout-out was staged. Protest organizer Leslie Dreyer talked to us on the phone and verified that this person's identity was Max Bell Alper, a union organizer from Oakland. This person was not a Google employee, and Dreyer was not able to verify if Alper was there in the morning with the group of 20-30 protesters.