The singer reveals her diagnosis -- and the "relief" of it 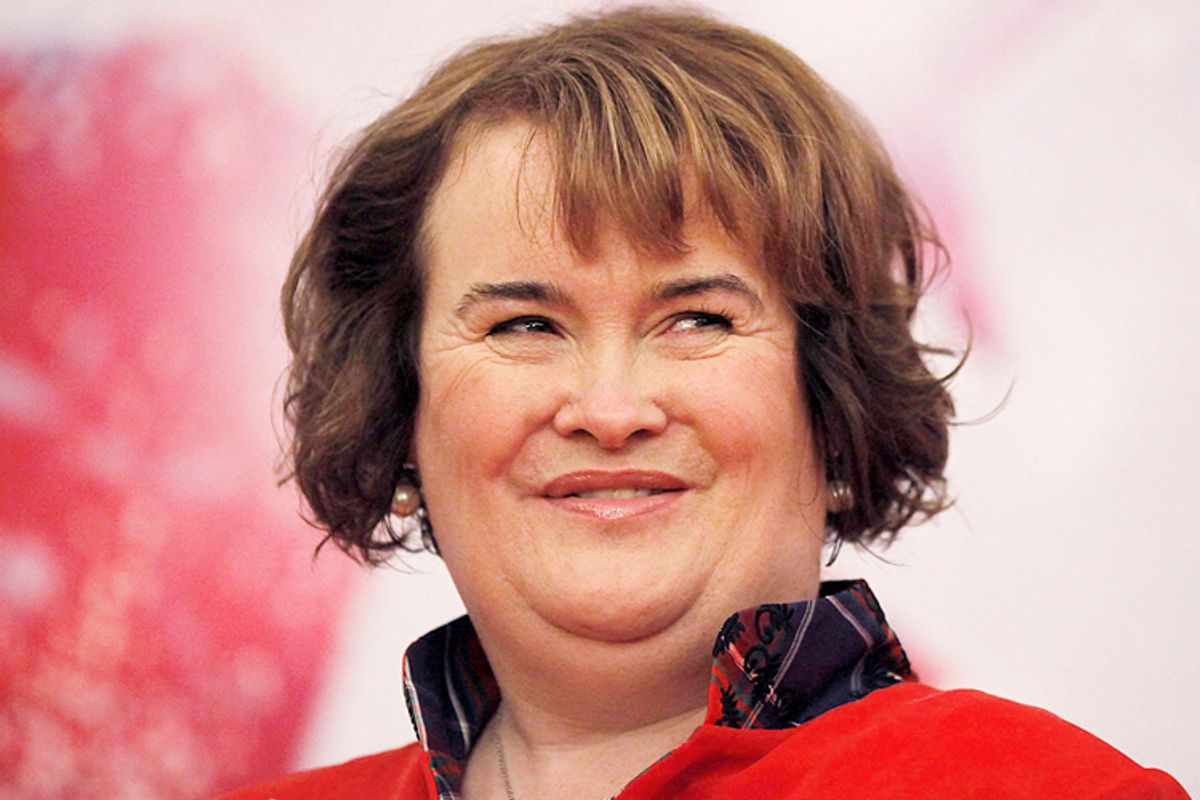 If you received a diagnosis for a disorder that's often stigmatized and misunderstood, a condition that's perpetually challenging and isolating, how would you feel? What would be your response, learning you have Asperger's? For Susan Boyle, the answer is, "relieved and relaxed."

The 52-year-old Scottish singer, who set the bar for the term "overnight success" in 2009 with a riveting performance of "I Dreamed a Dream" on "Britain's Got Talent," has spent the past four and a half years enjoying a level of success that few talent competition runners-up ever dream of. She's sold millions of albums, been nominated for two Grammy Awards, written an autobiography and become the subject of a hit musical. But she's also very publicly grappled with the pressures of instant stardom -- there has been a hospitalization for "exhaustion," a few painful televised bouts of stage fright, and the toll of seemingly endless commentary on her "frumpy" and "slow" demeanor. When you factor in all that a small-town woman whose prior show business history consisted of singing in the church choir has experienced in the past four and a half years, maybe then it's easier to understand why Boyle took her diagnosis with such apparent grace.

In an interview in the Observer this weekend, Boyle, who's currently promoting her fourth album, acknowledges that "Some articles have said I have brain damage," and says, "I have always known that I have had an unfair label put upon me." After seeing a Scottish specialist a year ago, Boyle learned that her IQ is in fact above average, and that "I have Asperger's. It is a relief."

People with Asperger's -- a condition on the autism spectrum – are generally characterized by having difficulty with social interaction and communication. As Boyle's interviewer Catherine Deveney describes her, the singer possesses "warmth, kindness and empathy" but also displays "delayed eye contact … visible anxiety until the stranger in her presence settles into at least superficial familiarity … slightly offbeat laughter in the middle of conversation … [and] sudden and obvious emotional withdrawal if she feels uncomfortable with a particular subject."

The interpersonal challenges people with Asperger's often face can make it easy for them to become the targets of bullies and critics – and Boyle has spoken and written much of her struggles in that arena, stretching back to the time she was a child. But in recent years, thanks to increasing awareness and more refined diagnoses, much ground has been gained in understanding both the condition and the people who have it. In 2007, John Elder Robison's memoir of his life with Asperger's, "Look Me in the Eye," became a New York Times bestseller. Two years ago, actor Paddy Considine said he was feeling "more comfortable and confident and in control" since learning of his Asperger's, and Dan Harmon revealed how he realized that he's on the spectrum when he began researching the character of Abed for "Community."

Recognizing that there's a reason for one's behaviors, rather than some kind of personal failing because they're not like everybody else's, has got to be pretty validating -- especially after more than five long undiagnosed decades of living. For a smart woman once mocked as "Susie Simple," one who has also battled depression and "got laughed at because people didn't think I'd do well … It's a condition that I have to live with and work through, but I feel more relaxed about myself." Boyle says she hopes that now "People will have a greater understanding of who I am and why I do the things I do."

The world can be a cruel place even when people do understand what you're dealing with. But with her candor, Boyle – one of the most successful musical performers in the world right now (take that, Miley) -- has offered herself up as a role model of what is possible when you dream a dream. She's opening up the possibility of more compassion and understanding for misunderstood and teased people with Asperger's all over the world. "I am here for a reason," she says, "and it must be to make people happy."