GOP senators and Obama's Treasury Secretary helped NYU shut out its grad students for 8 years. That's about to end 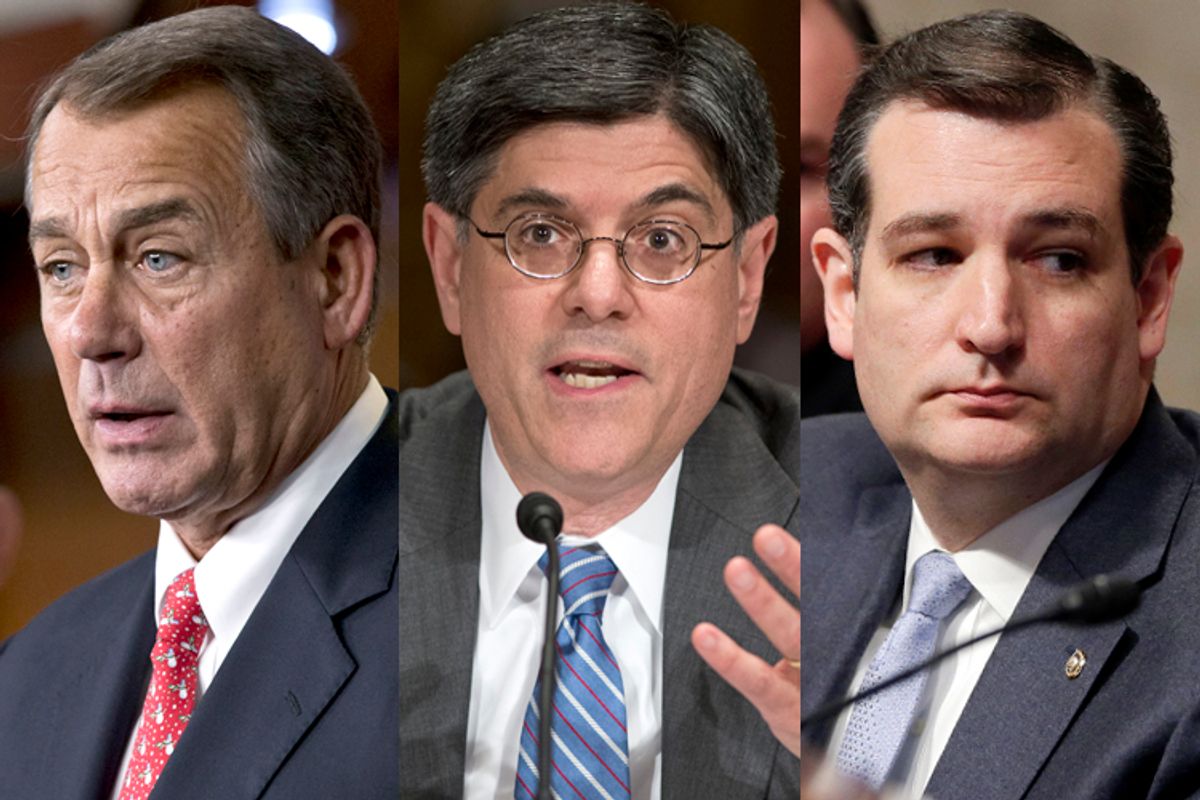 A vote being held tomorrow and Wednesday could secure union recognition for New York University graduate students, which the administration withdrew and then withheld from them — with help from congressional Republicans and Obama’s now-Treasury Secretary — for the past eight years. If the United Auto Workers emerges victorious in the vote, NYU will become only private sector U.S. university to bargain collectively with graduate student teachers and researchers — though such workers will remain excluded from U.S. labor law.

“We are a critical part of the university,” said Matthew Canfield, a leader of the UAW’s Graduate Student Organizing Committee at NYU. By “recognizing our rights,” he argued, NYU was moving closer to becoming “a better and more inclusive place for everyone.” Canfield told Salon it had become “incredibly difficult” for grad student workers to support families, and that GSOC was “pretty confident” of victory in Wednesday’s vote count.

“We felt there was a middle ground,” NYU Executive Vice President Robert Berne told Salon. He said NYU expects “that if the union wins, we will start to bargain right away.”

Under the agreement, announced just before Thanksgiving, the UAW has agreed to the withdrawal of a legal case asking the National Labor Relations Board to recognize graduate student teachers and researchers as workers with union rights; NYU has agreed to recognize and bargain with most of the graduate student workers the UAW seeks to represent, if they vote union in an American Arbitration Association-supervised election in which NYU has pledged to remain neutral.

That’s the latest twist in a multi-decade saga that’s pitted liberal university administrators against pro-union teachers, researchers and supporters, and cast the actions of out-of-office Democratic officials in stark contrast to the rulings of Democratic Labor Board appointees. That multi-decade showdown represents one front in organized labor’s struggle for a foothold amid hostile politics and economics, as well as a battleground in a larger fight over whom universities serve — poor students, rich donors, home cities, private industry, the Department of Defense — and how. “The GSOC decision,” argued NYU Professor of Social and Cultural Analysis Andrew Ross, “is one element in that wider landscape of pushback from below.”

As I’ve reported, NYU has repeatedly been a flashpoint in the national fight over whether the graduate students whom universities compensate and increasingly rely on to teach students and conduct research should have the right to organize and negotiate over the conditions of their work. In its landmark New York University ruling in 2000, a Clinton-appointed NLRB majority ruled for the first time that New Deal protections for private sector workers to organize, unionize and collectively bargain applied to graduate student employees. (Public sector graduate student workers have been unionized in many states for decades.)

But that decision didn’t unleash the wave of graduate student-worker union contracts organizers from several international unions had hoped for. Instead, an anti-union campaign defeated a union effort at Cornell; administrators at Brown, Columbia and Penn got election results impounded by appealing to the NLRB; and activists at Yale chose not to file for an election because the administration appeared poised to exhaust all legal options before allowing any ballots to be counted. (The international union behind the Yale effort is UNITE HERE, my former employer; I also supported their efforts as an undergraduate activist there.)

By all appearances, those Ivy League administrators (with a raft of liberal or Democratic credentials among them) were counting on George W. Bush’s appointees to the NLRB to reverse the Clinton Board’s NYU ruling once given the chance. And that’s exactly what happened: In its 2004 Brown University decision, the new NLRB sided with administrators, overturning the NYU precedent and ensuring those ballots would never be counted.

At that point, eyes turned back to NYU, the only private university in the country where graduate student unionists had won an NLRB election and a union contract. With the ruling overturned, NYU legally still could have negotiated a new contract with its graduate student workers when the first expired in 2005, but it didn’t have to. After inviting community input, floating a far more circumscribed form of representation and facing protests from high-profile activists like Jesse Jackson, Chief Operating Officer Jack Lew and Provost David McLaughlin announced that NYU would not negotiate a new union contract.

What followed was an ugly and ultimately unsuccessful months-long strike by graduate students trying to win back recognition for their union. Union activists and faculty alleged that the administration mounted an anti-union campaign that would’ve been illegal if not for the Bush Board’s ruling, including the firing of twenty strikers, interrogations of graduate student workers by supervisors, and a threat that those who struck could be denied future work — a move which foreign students charged could get them deported. NYU’s Berne told Salon Friday, “I don’t think anybody would have been deported,” but otherwise declined to comment on allegations from the 2005 strike.

Berne told Salon Friday he believed that NYU had been justified in withdrawing recognition from GSOC in 2005 because the union had violated its agreement to “stay away from academic issues.” Lew argued before the strike that the union’s use of the grievance procedure endangered “academic rights” and “academic quality”; the president of the Association of American University Professors dismissed such arguments as “disingenuous and risible…”

After the strike ended in defeat, GSOC activist Dacia Mitchell told me in 2011, getting a Democrat in the White House who could replace Bush’s NLRB picks became a major GSOC focus. NYU graduate student workers filed for a new unionization election in 2010, setting the stage for Obama NLRB nominees to potentially restore that 2000 NYU precedent. But with Obama’s initial hesitance to wield the recess appointment power to overcome GOP resistance to confirming his NLRB appointees, a Supreme Court decision that required a three-member NLRB quorum and thus the re-hearing of a bevy of decided cases and a pace at the NLRB that activists derided as insufficient, it remained unclear years later if and when such a ruling could happen. Asked last year about graduate students’ long wait for a new decision, NLRB Chair Mark Pearce quoted me an old commercial: “No wine before its time.”

A July Senate deal allowed Obama to fill the NLRB with its first full complement of confirmed members in a decade, but NYU unionists worried that one member of the 3-2 Democratic majority would recuse herself from their case due to past work for the UAW. “There was a window of time that we really felt” that a positive NLRB ruling “was imminent,” said Canfield, who sits on GSOC’s organizing committee. “And at a point it became clear that not only was it no longer imminent, but it was unclear what would happen.”

Professor Ross, the co-editor of "The University Against Itself: The NYU Strike and the Future of the Academic Workplace," suggested that NYU’s administration ultimately “made the decision to seek out co-existence” with the union in part because President John Sexton “is still trying to survive seven votes of no confidence” from various faculty over issues related to NYU’s expansion and governance. “They are very much in a state of siege,” said Ross, “and they quite simply lost the appetite for another battle like this.” Berne rejected the idea that other controversies had forced NYU’s hand, arguing that the ultimate deal was similar to one NYU had proposed years earlier, and that “the prospect of a long pathway” at the NLRB had “brought us and them to the table.”

The UAW’s deal with NYU excludes researchers in six "hard science" departments (Berne argued they are “essentially doing their own research” with federal funds, rather than “work for the university”; Canfield said GSOC remains “committed to representing” them in the future), and presumably means any new national NLRB precedent would have to come from a new case elsewhere that began winding its way through the NLRB process from scratch. But activists at NYU and elsewhere hope the deal will offer a different kind of precedent: graduate student worker activism and  pressure from allies compelling a private sector university to come to the table, despite not being legally required to.

“We are very excited about NYU,” e-mailed Aaron Greenberg, who chairs the Graduate Employee Student Organization at Yale. Over decades of organizing, GESO claims victories on issues ranging from low-income access to an AIDS drug graduate researchers helped create to health coverage for their children. But GESO remains unrecognized by Yale. “The NYU precedent,” said Greenberg, “shows what’s possible in the absence of a court decision.”

“Several years ago there was a lot of momentum in the academic labor movement, especially in graduate student organizing,” said Ross, who chairs NYU’s AAUP chapter. “And a lot of that energy was just put on hold waiting for this [NLRB] decision to come down.” He argued that “the frustrating experience has been quite valuable, I think, as a lesson that organizing can’t stop and wait — it has to be going on in tandem with the legal process.”

Canfield said that he had been “concerned at first” about how dropping the NLRB case would impact fellow unionists at other universities, but that in conversations he’s found “they feel really energized by this” deal. Union recognition at NYU, he argued, “will show other graduate employees at private universities that it is possible to have a union for graduate employees, and that they don’t have to wait for the NLRB — which has not really proven a successful strategy for us.”