6 conspiracy theories about the imaginary war on Christmas

Every year, the right-wing freaks out about a phenomenon that's about as real as Santa Claus 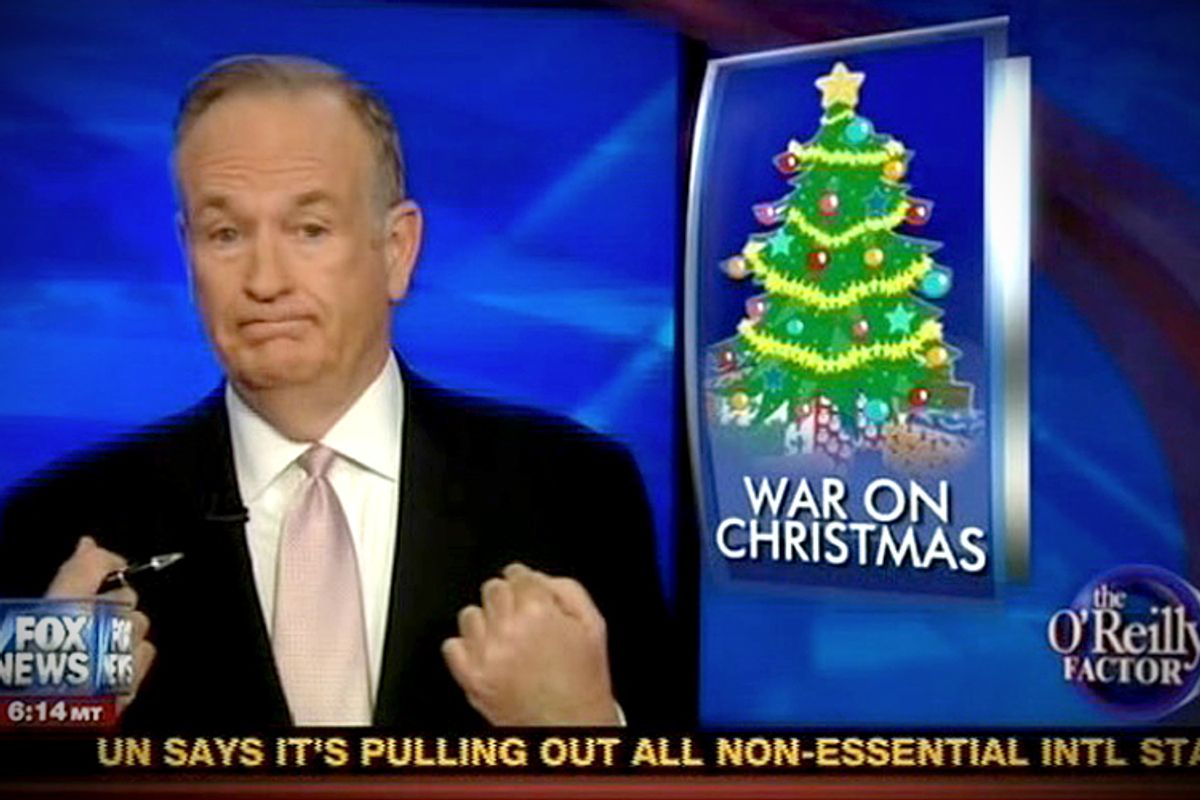 It’s an article of faith among the Religious Right that there’s a war on Christmas underway in the United States. Shoppers would be hard-pressed to see evidence of this seasonal conflict, as anyone who stared mystified at stores decked out with Christmas garlands even before Halloween can testify. Christmas would seem as ubiquitous as ever. Nevertheless, every year groups like the American Family Association, the Liberty Counsel and others, aided and abetted by the zealous elves at the Fox News Channel, spread horrific tales of state-sponsored yuletide banishment.

This year they have help: Sarah Palin’s new book,Good Tidings and Great Joy: Protecting the Heart of Christmas, is burning up bestseller lists. The tome recycles several Religious Right claims about the war on Christmas, but in typical Palin style, the hard evidence remains thinner than dollar-store wrapping paper.

What’s really going on? I’ve been an unwilling combatant in this conflict since it was hatched by the Religious Right some years ago. Believe me, there’s less here than meets the eye—much less.

Upon even cursory examination, the Religious Right’s “war on Christmas” claims melt faster than a snowman in Belize.

1. Public schools have banned the colors red and green. This one has been floating around the web for years. It has morphed into a classic Religious Right urban legend. The claim is made, but the details are few. Key questions are left unanswered: Where did this happen? When? How was the ban enforced? Was teal included?

The claim, which appears to have been made up out of whole cloth, was pinned on several unnamed schools. Finally, in 2005, a public school in Michigan was accused by name. Asked about the matter, the principal laughed and said there was no such color ban. It would be hard to ban green at the school, he added: It’s the school’s color.

These wild tales can cause schools real harm. A Dodgeville, Wisc., public school that was falsely accused of banning Christmas carols was flooded with hateful emails and calls. The school had to spend thousands of dollars mounting a public campaign through the media to set the record straight.

What does this mean on the ground? A public school holiday concert that includes only sacred music is a no-no. But a concert that includes secular and religious tunes is all right. A play reenacting the nativity is better for a church than a public school, but other types of pageants may be acceptable. Sectarian symbols and signs are OK for use in objective instruction but shouldn’t be posted in the school. And finally, it’s no big deal if terms like “winter concert” and “holiday concert” are used. A public school serves youngsters from many different backgrounds. Inclusive terms make everyone feel welcome—job number-one for any public school.

3. Special laws are needed because it’s illegal to say “Merry Christmas."So-called “Christmas protection” laws have surfaced in a handful of states this year. They are unnecessary and amount to little more than grandstanding.

State legislators are free to pass any silly measures they like, even ones that merely restate the obvious. Such is the case in Texas, where a new law ensures that everyone has the right to say “Merry Christmas.” Of course, no one had been told not to say this. The measure’s sponsor, Texas Rep. Dwayne Bohac (R-Houston) couldn’t point to any specific examples of Christmas censorship when asked and would instead just insist that public schools are afraid to use the term “Christmas tree.”

Which leads us to….

4. You can’t use the term “Christmas tree” anymore or even display them in public. Sure you can. Christmas trees have never been declared religious symbols, and many state and local governments display them. The trees are hardly disappearing. Go for a walk in December if you want to see some.

This myth started because Rhode Island Gov. Lincoln Chafee has, for several years now, referred to the evergreen at the statehouse as a “holiday tree.” Chafee did this because he is aware that he represents people of many faiths (as well as those who have no faith), and he wanted everyone to feel welcome. Thus, a gesture that is kind and inclusive, and squarely in the best traditions of a holiday season dedicated to peace and understanding, becomes, to the Religious Right, an attack on all that is good and decent. (The irony is that Christmas trees are hardly Christian. They are of pagan origin, and there’s at least one Bible verse—Jeremiah 10:2-4—that seems to warn Christians against them.)

But it’s not as if anything goes. A pluralistic society has rules. The Supreme Court has ruled that local governments can’t display only religious symbols in December. They may include things like manger scenes if they are part of a larger array that also contains secular elements. Furthermore, private groups can, under certain conditions, display religious symbols on government property on their own time and with their own dime. But the city must play fair: If nativity scenes and menorahs are displayed, other religious organizations, atheist groups and Flying Spaghetti Monster adherents must be given access as well.

6. Clerks in stores have been ordered to say “Happy Holidays,” and store flyers and catalogs no longer mention the word “Christmas.”Some do and some don’t. Many retailer workers say “Happy Holidays” because 1) they are reluctant to assume that their customers observe Christmas; and 2) there is more than one holiday celebrated at this time of year.

Every year, the American Family Association hires people to count the number of times the word “Christmas” appears in store circulars. If it fails to show up enough times to satisfy the AFA, the offending retailer is subject to a boycott.

Aside from it being just a tad obsessive, there are several problems with this approach. For starters, retailers are private entities, not arms of the government. What they say would seem to be their own business. Secondly, many retailers use a mix of terms. (Vermont Country Store is notorious for this. A “holiday catalog” will be followed a week later by a “Christmas catalog.”) Finally, the Religious Right’s approach is overly simplistic because it all boils down to one word: Christmas. Under this theory, the AFA’s devotees can shop at an adult book store as long as it’s having a Christmas sale.

A lot of people in the Religious Right devote considerable time and energy to furthering claims of a war on Christmas every year. What’s really going on?

Put simply, American society has changed. We’re more religiously diverse than ever. More and more people are doing their own thing. Some people dare to celebrate Christmas in ways the Religious Right does not like. They might jettison the religious stuff (midnight mass, prayers, Bible stories, etc.) and keep the secular aspects (gift-giving, parties, feasting, etc.). Some people add elements from other faiths and other cultures. (You can buy “Festivus poles” on eBay these days.) Others don’t celebrate the holiday at all.

As usual, the Religious Right has a religiously correct way for all of us to do things. If you deviate from that, you’re part of the “war on Christmas.”

The good news is that more and more Americans are standing up to the Christmas police and rejecting the Religious Right’s view (which just infuriates them all the more). This is still a free country, and we have the right to observe the holiday in whatever way is meaningful for us, as guided by conscience.

We have that right because America’s founders saw fit to separate church and state and bequeathed to us a secular constitution that protects all beliefs but enshrines no one faith above others. Some might call that the best gift of all.