Tech firms have come together to demand NSA reform, but mass surveillance will not end any time soon. Here's why 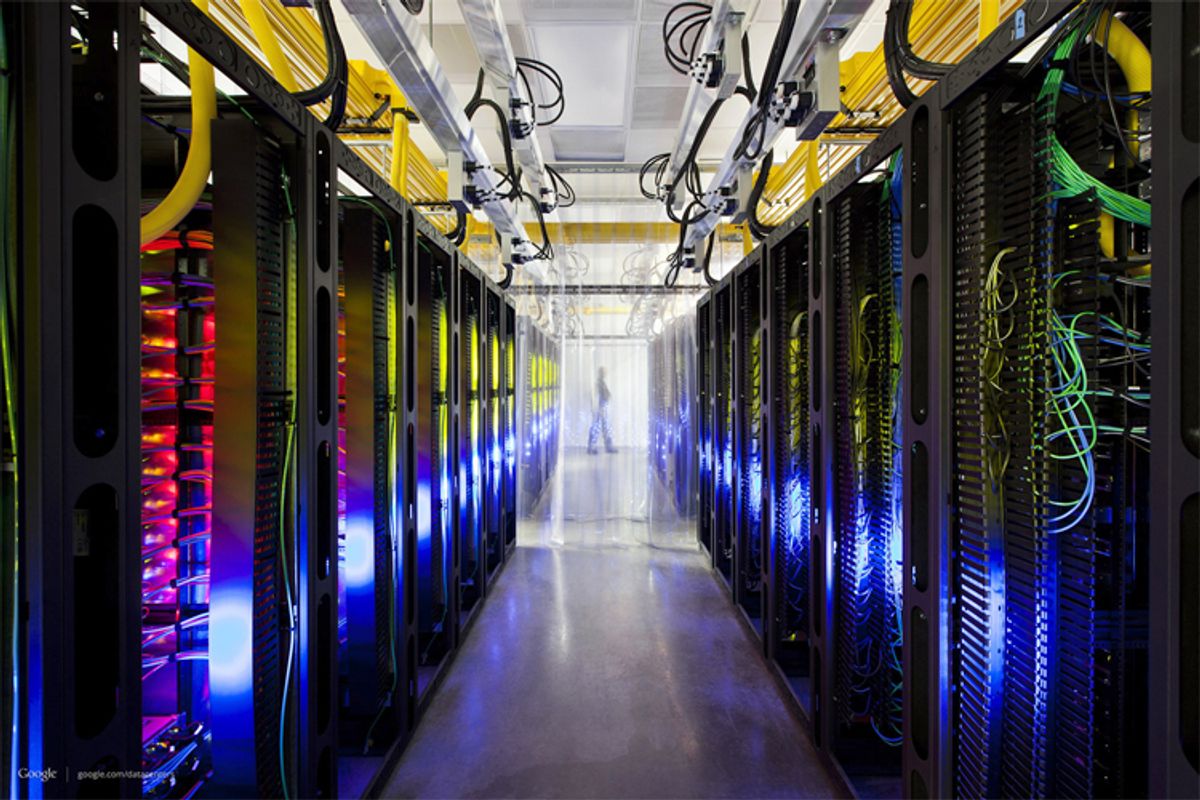 The campus-network room at a data center in Council Bluffs, Iowa. With the cooperation of foreign allies, the NSA is potentially gaining access to every email sent or received abroad, or between people abroad, from Google and Yahoo'­s email services, as well as anything in Google Docs, Maps or Voice, according to a series of articles in the Washington Post. (AP/Google/Connie Zhou)
--

An epic showdown is shaping up: Goliath vs. Goliath. Tech giants vs. the intelligence community. Or at least that's one way of looking at joint efforts this week by Silicon Valley leviathans, including Google, Yahoo and Facebook, calling for an end to mass NSA surveillance programs. While agreeing that efforts to rein in the NSA's unbounded data collection are necessary, I'd suggest that even robust reforms to NSA practices would not dismantle the surveillance state. Furthermore, shifting national security practices away from a model of preemptive, dragnet surveillance is not just a practical challenge -- it's an ideological battle.

Eight major tech firms (with a combined value of $1.4 trillion) penned an open letter Monday disavowing the NSA's dragnet spy programs and demanding greater transparency. "This is a major game-changer,” Leslie Harris, president of the Center for Democracy and Technology, an advocacy group, told the Guardian.

And indeed, the united and powerfully backed push for government surveillance reforms is a "game-changer." But, and this is crucial, what game are we talking about changing? At the crux of the tech giants' demands is an end to dragnet surveillance -- the sort of programs, like PRISM, that collect communications metadata and data without a pinpointed target, to enable the possibility of "connecting the dots" once vast swaths of data have been hoarded. Such programs, as has been noted here and elsewhere, treat every ordinary citizen as a de facto possible threat, always already surveilled. It would take nothing short of a profound ideological shift in the intelligence community to end the predilection for mass surveillance. The sort of preemptive policing theory that undergirds dragnet data collection is definitive of post-9/11 national security.

As the CIA’s chief technical officer, Gus Hunt, said in a speech earlier this year “The value of any piece of information is only known when you can connect it with something else that arrives at a future point in time … Since you can’t connect dots you don’t have, it drives us into a mode of, we fundamentally try to collect everything and hang on to it forever.” This, as Snowden's leaks continue to show, is NSA logic: a prefigurative and preemptive attitude to an ill-defined idea of imminent threat. It's the deep logic of U.S. policing at home and abroad. I have drawn the comparison before between the government's mass surveillance programs, the CIA's approach to drone strikes (particularly signature strikes and "disposition matrices") and the way policing programs like stop-and-frisk operate. They all rely on treating groups, networks and individuals preemptively as threats, watching, searching and killing on flimsy or entirely empty grounds for suspicion.

It's a tall order, indeed, for piecemeal reforms of surveillance programs to entirely shift a state logic of hoarding and "connecting the dots." I'm not suggesting that there's nothing important or fruitful in demanding transparency about these sorts of government operations, or fighting to curtail mass surveillance. I'm simply suggesting that we need to take account of the scope of the problem -- we're talking about the very operation of the national security state.

The powerful cohort of tech firms demanding NSA reforms are the very companies that uphold and enable the surveillance state, the very firms (as Snowden's leaks revealed) that helped spy agencies weaken standard encryption standards, structurally weakening the Internet and enabling government surveillance. Tech giants like Google and Yahoo, as I've pointed out, rely on collecting and holding untold swaths of private communications data. Yes, we agree to give over our private information and personal communications in using these companies' products. But choice is a funny issue here, in a world where using devices to communicate, work and operate in society requires us to tacitly accept tracking devices without necessarily first seeing them as such. Our smartphones, email and social media accounts render us always already primed as surveillable subjects. We're spying on ourselves.

We can be somewhat reassured that the major tech firms are making efforts to reassure their customers that they want to keep our data safe from state surveillance. But for years we've signed up for corporate surveillance without really thinking about it, just by virtue of living on the Internet without caution. And the reform demands of the Silicon Valley giants must be taken with a fistful of salt. Snowden's leaks shed light on the fact that these companies have long cooperated with government mass surveillance programs (sometimes openly, sometimes less so). The NSA revelations have fostered growing distrust in the privacy protections offered by platforms like Google and Facebook, so it's in these companies' shared corporate interest to make a song and dance about their concern for user privacy -- lest their bottom lines are put at risk through consumer distrust. After all, before outrage blossomed over NSA surveillance, it was Google CEO Eric Schmidt who in 2009 said, “If you have something that you don’t want anyone to know, maybe you shouldn’t be doing it in the first place.”