I fell in love with a Salon commenter

I read hundreds of letters on my story, but his struck me. When I reached out, I learned how much we already shared 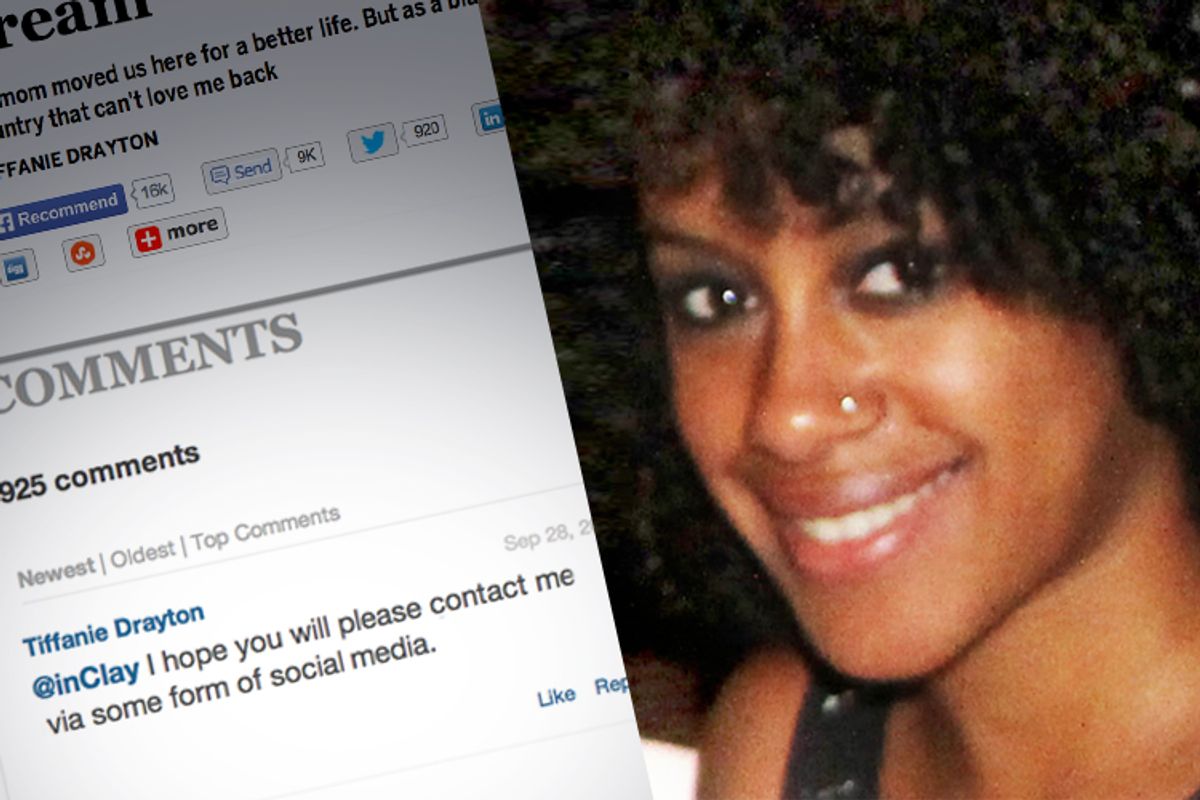 "I do not know you, but I love you," I typed. I stared at the words, momentarily letting them linger, then pressed "send.” The recipient of my confession lived thousands of miles away. We had no connection to one another aside from two pieces of writing: one article that I wrote and one comment that he left.

A few weeks earlier, I had written a story for Salon about leaving the United States because of the encounters I had with racism and my ultimate disillusionment with the "American Dream.” I described myself as a black, 23-year-old woman, and a portrait of me with wild curly hair accompanied the text. Hundreds of comments posted to my story. Only one caught my eye.

"It is revealing that a person in the author's position must first validate her existence before her experience can be deemed relevant to the human condition," it began. I hesitated before continuing. I had skimmed through so many comments at that point, most of which existed in a world of right or wrong. Never from a place of understanding. I wondered who this person could be who saw me as, above all, a human being.

"Please contact me on some kind of social media," I asked the unknown writer. Soon after, I found a message in my inbox on Facebook from a Josh Mcc. He introduced himself with a brief, simple paragraph. His profile picture was of a blue, alto-cumulus-cloud-filled sky. I sat with it for a moment, trying to build the courage to say what I felt. I was in love with a stranger in the clouds.

Our relationship started slowly. We exchanged messages about our dreams, goals, passions and pasts. He told me he was an animator by trade, but he wrote because he felt it was the only way he could express himself. I told him about my new life outside of the busy one I left behind in New York City. We traded our old writings and shared new ones inspired by one another: each a tiny snippet of ourselves, cut out along imaginary lines, folded up digitally, and delivered thousands of miles by cables and satellites.

One day, a tiny photo of a smiling young man popped up beside one of his messages. I clicked it frantically, wanting to finally meet this stranger with my eyes. It was blurry and small; a picture of him smiling heartily with dimpled cheeks and caramel skin. I stared at the photo, my heart and mind racing at the sight of his face. Is this really him? Does he have any more pictures? He is really cute. Am I crazy?

He was a thoughtful, passionate 28-year-old black man who had spent the majority of his life in a mostly white suburb of Ohio. His family, as he described it, was the "go to" black family. Growing up, he felt isolated by his skin color, trapped in a world of whiteness that he could never fit into. He described this to me with stories about his childhood.

"I remember one day my brother and I were playing with a group of kids, when one asked, 'What race are you, because I am white?'" He said, "I hadn't really thought about it, even though I knew my skin was brown. I thought everyone was white."

That was the beginning of the realization that he would never be included or accepted. When his father, who was a physician, took over a local practice and all of the patients stopped coming and other fathers in his town warned that he should not date their daughters, that was only further validation.

I had spent my life fighting the same secret, internal race war. The child of a Caribbean immigrant mother, I was taught that assimilation was the key to success and "whiteness" was assimilation's default. I spoke with perfectly enunciated English, preferred rock music to hip-hop, played tennis, learned how to golf. When black people commented that "I spoke too white,” I cried. When white people praised me for not "acting black,” I cringed. That was the story we shared: the American race story that is so easily denied and dismissed. A story that we are not supposed to tell.

For so many years, we were silenced -- I was silenced. Told to repress my feelings, deny my reality. Writing gave me a voice, it allowed me to speak my truth. He told me it was real; he validated my existence and I appreciated all the things about him that others told him not to like.

“I think you are sexy,” I said after we began our daily Skype sessions. He had large, shapely pink lips, smooth skin and dark brown, sincere eyes.

“I don’t think so,” he said. From the hurt in his eyes, I knew the feeling. I had grown up with similar insecurities.

When he told me, “I love your hair,” I responded with a shrug. I always thought my kinky curls could not match in beauty the straight, flowing, silky hair in shampoo commercials. We both lived life believing that we fell short of the ideal. We had to work hard to convince one another differently --  that what we had, who we were, was good enough.

"I want to meet you," I finally said after months of exchanges.

"Ah, OK,” he responded with his usual hesitancy.

"I'm going to be in New York in December," I said.

Plans were made to spend Christmas with my family and New Year’s Eve back in Trinidad. I bought my plane ticket a month in advance and we anxiously counted down every day together.

We met for the first time a couple of days ago. He drove eight hours from Ohio to meet me at Newark International Airport. I spotted him immediately in the distance. He stood tall and confident. I walked up to him and we stared awkwardly at one another for a long moment, our minds unable to process one another’s presence. His eyes softened and he pulled me close, embracing me tightly in his strong arms. I breathed in deeply, taking in his scent for the first time. He held my hand, grabbed my bag, and led me to the exit. I watched him as he escorted me intently; his big soft lips, brown skin and eyes focused ahead. To me he was perfection.

Our love cannot be denied. And neither can the stories that brought us together.