Loony Steve Stockman will try to unseat John Cornyn because of one irrelevant procedural vote. Grab the popcorn 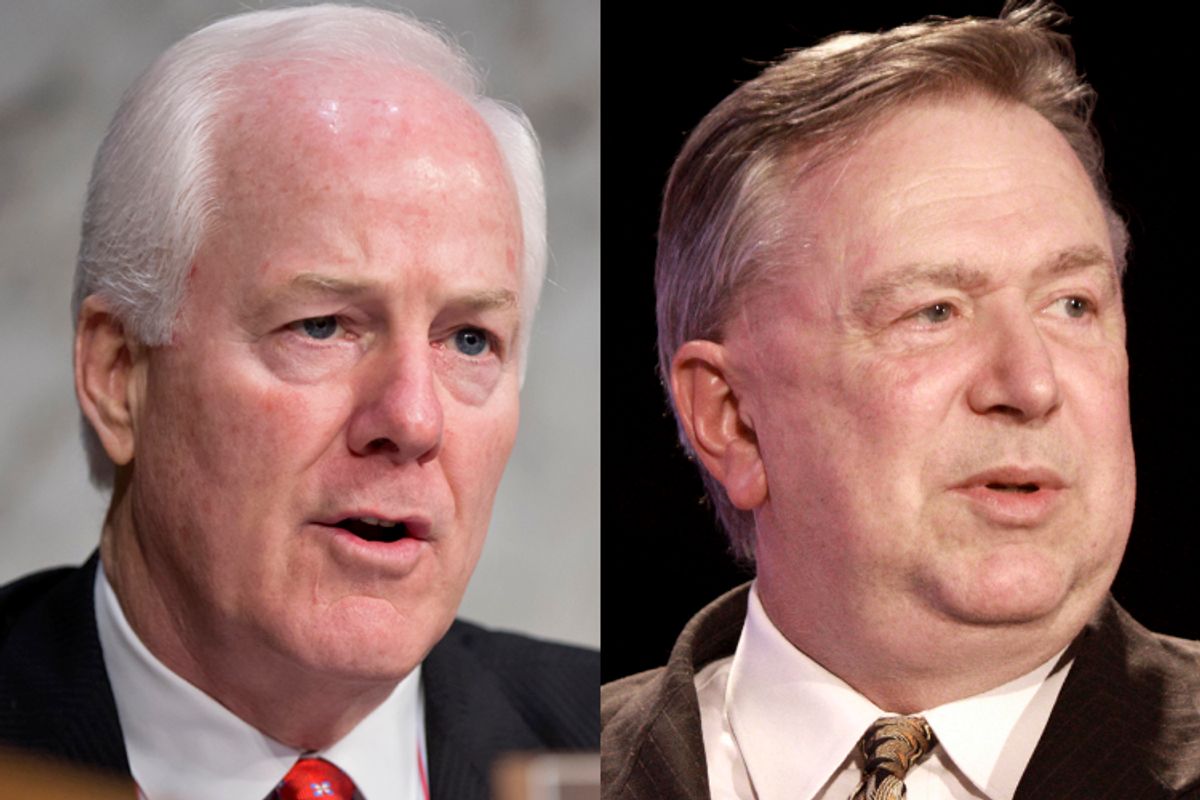 It was but 20 minutes before the filing deadline to primary Texas Sen. John Cornyn, and Texas Republicans thought the coast was clear. No one of any mettle is going to run against "Big John," they thought. And when the deadline passed, they were right: No one of any mettle would be running against John Cornyn. Congressman Steve Stockman would be, though! Hoo boy.

This is great principally because Steve Stockman is earth's funniest person. Come to think of it, he may share that title with another member of the Texas House delegation, Rep. Louie Gohmert, who has declined to challenge Cornyn this cycle. What a shame! They could've both run against Cornyn and gotten their asses kicked together, then run off together to start a traveling vaudeville act focusing on physical humor. But no, Stockman will fight Cornyn alone.

The main reason that Cornyn will likely crush Stockman is that Cornyn is already extremely conservative while Stockman is a straight-up clown. OK, that's not persuasive enough in this day and age of Republican primaries, is it? Fine, then, Stockman will lose because he has no money ($32,000 on hand and much more than that in debt) and Cornyn has a lot ($7 million).

Stockman, who announced his decision first to World Net Daily, explained that he decided to jump into the race because Cornyn didn't support fellow Texas Sen. Ted Cruz on a procedural vote in the Senate ahead of the government shutdown. (This was when Cruz, for strange parliamentary reasons, was trying to filibuster a vote on the very House bill defunding Obamacare that he had asked be sent over to the Senate.)

Stockman told WND he is filing the paperwork Monday evening and that he is running against his fellow Republican because, “We are extremely disappointed in the way he treated his fellow congressmen and broke the 11th commandment and undermined (Sen.) Ted Cruz’s fight to stop Obamacare.”

The Texan added, “And now, it looks like Cruz was right and Cornyn was wrong. He (Cornyn) sided with the president, essentially, in making sure Obamacare became law while Cruz did everything possible to stop it.”

It wasn’t just what Cornyn did, but how he did it, that rankled Stockman.

“If you disagree with someone, that’s fine, but I really believe you should do it privately, not so publicly,” he said. “He made a big show of removing his name from a letter supporting Cruz.”

Yep, that's it: He will primary Cornyn because Cornyn removed his name from a letter and didn't vote Cruz's way on a procedural vote. Cornyn more or less declared himself a communist in doing so. (Cornyn is such a commie, he probably thinks nice thoughts about Nelson Mandela.)

Stockman's only chance, really, involves the big outside spending groups supporting him in Texas' major media markets. So far the reception from those quarters has been ... well, not icy, but cool, for sure. (They have no idea what the hell is going on.) The Club for Growth isn't getting involved, pointing to "viability" issues, as in -- paraphrasing here -- "Steve Stockman is not a viable candidate." The Senate Conservative Fund is all, he's doing what? Oh ... that's ... nice ... (*runs away*):

“We haven’t decided yet whether we will endorse Steve Stockman, but we’re glad he is running,” Matt Hoskins, the group’s leader, said in a statement. “Texas deserves two conservative fighters in the Senate, not just one. John Cornyn has voted to increase the debt, raise taxes, bail out Wall Street banks, and fund Obamacare. He’s part of the problem in Washington and voters deserve an alternative.”

And Ted Cruz, whose honor Stockman is defending, isn't taking one side or another. Give 'em hell, Stevie.