The media's Michelle Obama problem: What a selfie says about our biases 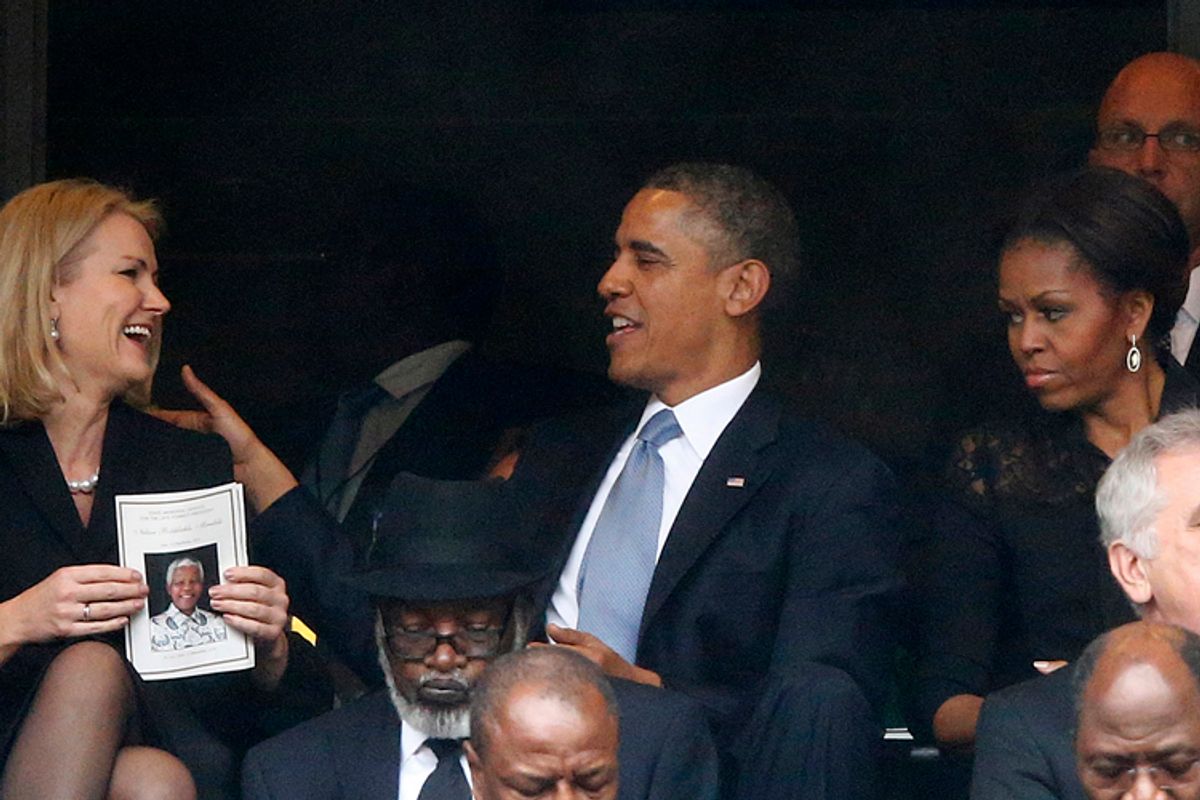 Not even President Obama is above taking a selfie in the least appropriate selfie-taking venue possible. While attending a memorial service for Nelson Mandela in South Africa, Obama posed with British Prime Minister David Cameron and Danish Prime Minister Helle Thorning Schmidt. It is probably a bit tacky for these world leaders to pose and preen together, but they are only human. We are all helpless when we have such photographic power in the palms of our hands.

In the already widely circulated image, Michelle Obama is sitting to the president’s left, staring into the distance. In two other images, the first lady looks in the president’s direction as he speaks with the Danish prime minister and then looks straight ahead.

The media (and everyone else) have reacted, trying to frame Michelle Obama as “angry” or “disapproving” when maybe she wasn’t even paying attention to her husband being silly with his world leader friends.

At the Washington Post:  “The first lady looks stern -- dare we say disapproving? -- throughout.”

In the New York Daily News Michelle Obama “sat at a distance, as if in disapproval of the digital display.”

Someone at Business Insider quipped, “That stare can kill.”

The headline at The Huffington Post boldly declares “Michelle Obama is having none of it.”

On and on the punditry goes, ascribing very specific, historically racialized narratives to what Michelle Obama is thinking and feeling in one candid moment.

Setting aside how sad it is that this story is even being reported as a “story,” we have no possible way of knowing why Michelle Obama isn’t grinning and posing and presenting herself the way people apparently expect her to at a memorial service for one of the most beloved world leaders of our time. Has it gone unnoticed that in these images, she’s the one person acting like she’s at a memorial service?

Some of the response is certainly tongue-in-cheek. After the wonderful side eye Michelle Obama gave John Boehner during a luncheon after the president’s second inauguration, we all had a lot of fun imagining what the speaker could have possibly said to elicit such a vivid reaction. But what I’m considering here is not that there is no room for jokes, but that all too often, it is black women or caricatures of black women that serve as the punch line.

More than anything, the response to these latest images of Michelle Obama speaks volumes about the expectations placed on black women in the public eye and how a black women’s default emotional state is perceived as angry. The black woman is ever at the ready to aggressively defend her territory. She is making her disapproval known. She never gets to simply be.

Maybe the first lady is irritated with her husband or someone else, maybe she’s indifferent, maybe she’s thinking about the long plane ride home, maybe, just maybe, she’s recalling Nelson Mandela’s life and legacy. We will never know.

Meanwhile, the Internet is speculating about Michelle Obama’s mind-set, her motivations and the state of her marriage because if a married black man, always on the prowl even if he is the commander in chief, is seen smiling next to an attractive white woman, well, that’s curtains for the marriage. The white she-devil strikes again! The first lady can’t win. Last month, Michelle Obama was a “feminist nightmare.” Today she is angry and on the verge of losing her marriage. We can only imagine what tomorrow will bring.

And of course, there is another image that simply isn’t being shared with the same frequency or enthusiasm—one of Michelle Obama sitting with her husband and the Danish prime minister laughing and smiling openly. We are selective in what we choose to see. This image is being ignored because it doesn’t fit the narrative we want. There is also an image, shared by Goldie Taylor, of Laura Bush looking unamused while her husband speaks to a beautiful woman in the row behind them. Is she disapproving? Is she worried about her marriage? Is she “having none of it”? Or is she just sitting?

Though in most cases, the selfie allows us to turn the camera on ourselves, President Obama’s selfie at Nelson Mandela’s memorial service was a mirror, reflecting the biases people may not even realize they hold.