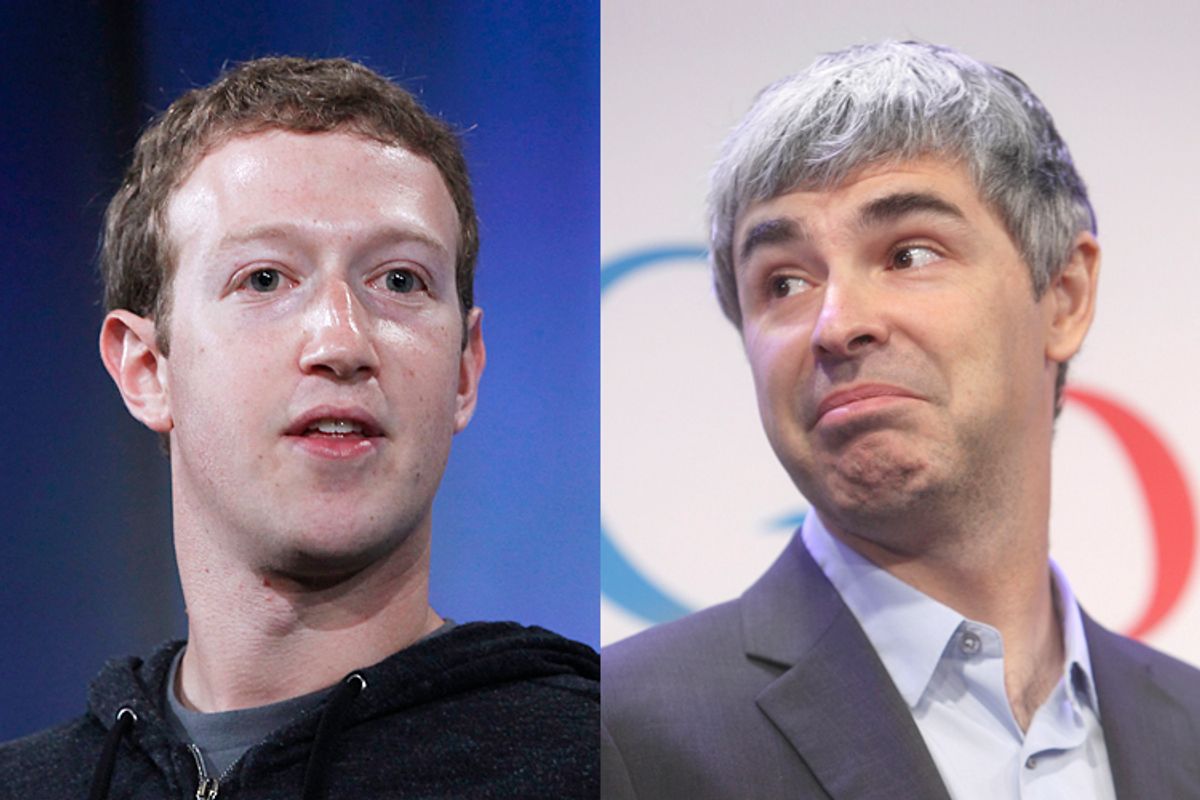 As philosopher Robin James insightfully pointed out last week, “privacy is a red herring”; that is, it is not a relevant consideration in the debate over surveillance and government power. Rather, the real issue is the balance between “security and freedom,” as Obama and Director of National Intelligence James Clapper repeat ad nauseam, the trite pro-surveillance mantra. Balance, according to James, can be considered either as “the average of two extremes” or it “could mean a dynamically-adjusting continuum (the kind of balancing done, for example, by an audio equalizer or an electrical resistor).” She argues that the discussion over balance is about the latter — how to continually fine-tune the precise resting place between security and freedom.

James’ point is well taken. One of this week’s major stories seems to confirm the success of neoliberalism in precisely this vein: Eight top tech companies published an open letter to the president, in which they urge him to limit the state’s surveillance activities because the “balance has tipped.” It’s not clear what the balance is, though here is how they describe it in their letter:

The balance in many countries has tipped too far in favor of the state and away from the rights of the individual – rights that are enshrined in our Constitution. This undermines the freedoms we all cherish. It’s time for a change.

Prima facie, the tech companies are concerned about the encroachment upon individual freedoms, such as privacy.  Coincidentally, such “tipping” dovetails with profit losses for these companies, since as customers continue to hear about how these corporations have turned over supposedly private information to the government (sometimes making even more profit in the mix), they may challenge them by shutting down their Facebook, LinkedIn and Yahoo accounts (which in turn induces further lost revenue from advertisers). They may engage in some other form of resistance (as encouraged through a neoliberal environment — of relocating their money (and potential corporate profits elsewhere), such as by shifting to nonprofit tech organizations or open-source browsers, software, etc., whose primary mission is to protect user privacy. As such, the tech companies’ own “balance” of interests – located between complying with government requests and profiting by (falsely) claiming to protect their customers’ privacy for profit – also tips, in favor of the state.

Elsewhere in their (advertising) campaign to reform government surveillance, they suggest five “principles.” This is the first one:

Governments should codify sensible limitations on their ability to compel service providers to disclose user data that balance their need for the data in limited circumstances, users’ reasonable privacy interests, and the impact on trust in the Internet. In addition, governments should limit surveillance to specific, known users for lawful purposes, and should not undertake bulk data collection of Internet communications.

So, the “balance” that the tech companies suggest is a balance between the government’s “need for data,” “users’ reasonable privacy interests” and “impact on trust in the Internet.”

Funny how the “principle” is rather an exercise in pragmatism: The tech companies don’t disagree that the state “needs” private information. They just insist that the state restrict its demands to that information that falls outside of “users’ reasonable privacy interest.” Presumably, “we” would all be OK if the National Security Agency just collected the data of only those who might be terrorists and threatening American security interests.

Still, on this “principle,” I wonder how the U.S. would distinguish between terrorists and reasonable privacy unless they collected everyone’s data. Doesn’t that bring us full circle back to the premise of all-encompassing surveillance?

I would add that, as the tech letter shows, while the language they resort to is the time-honored liberal discourse between security and freedom, in fact the balance they care about is the balance between corporate profits, government power and customer complacence. It is not necessarily a problem to tip over from freedom to security, as long as government surveillance doesn’t begin to cause unrest among their customers such that they lose their profit machine.

Presumably “being sensible means not undermining “trust in the Internet,” which makes total sense, when your business profits depend on your customers’ trust in the Internet. So the appeal from the tech companies to the U.S. government, in essence, is to continue their collaboration with the corporations to mine and acquire as much data as possible, but to be less obtrusive, less extreme, less confrontational about it. One way to do so is to reinstitute strict controls on which persons are the focus of data collection.

This is the quintessential neoliberal environment: Corporations and the government converge to strip the focus away from rights so as to have better control over individuals. But at the moment that corporate profit is threatened, corporations no longer act in complete concert with the state, but rather “institutions” (the government and corporations) battle each other for control over consumers/citizens.

I think there’s a different (or another) red herring, to borrow from James: It is the red herring of “interests.” In other words, the discourse of interests distracts the “public” conversation from naming several realities (i.e., this is what is not printed as part of the official record, as in Reuters or the New York Times; it doesn’t mean that many of us don’t see it).

1) It distracts us from being able to identify the struggle over the limits of surveillance as being about the limits of corporate power versus the state’s power and not, as it's typically articulated, to protect persons/subjects/consumers/citizens.

2) This struggle is better understood as that between corporate interests for profit (and managing its customers’ behaviors for that purpose) vs. government interests to acquire all information as a mode of securing control over subjects and companies.

In other words, the struggle between the tech companies and the government is over managing individual actions en masse, and by extension, its dialectical counterpart: consumers’/subjects’ resistance to being managed.

And this battle reflects the red herring of interests: The discourse of “interests” saturates the public conversation, such that privacy is no longer a relevant question. In fact, the prime concern that governs state actions is “its” own interests. This makes more sense if we revert to the assumption that the state’s interest is in its own survival, not that of its subjects/citizens. That corporations have their own interests in mind is obvious, but their interests are profits as extracted through the control/management of consumers’ actions (such as through Google’s and Facebook’s data collection methods), which in turn are enhanced by targeting personalized ads at each user, which in turn extracts more information about user behavior.

The issue at stake is not about principles, or ethics, or privacy, per se. Rather, the real concern, from the perspective of the tech companies, is their profits being lost. That is the tipping point that shifts the balance away from profit in the service of overwhelming government desire to know everything that’s going on. That interest was OK, so long as the public (customers) didn’t know (or didn’t focus so much on) the fact that their information was being handed over in volume by the tech companies. But when that knowledge threatens to drive away their customer base, then the “balance” qua fine-tuning has been lost.

I think James is right when she questions the relevance of privacy: She and I don’t disagree, per se. But my emphasis on “interests” emerges by shifting the analytic:  The language of “interest” distracts us from the question of privacy. In part, this is because the language of privacy reflects an old liberal discourse of principles in relation to the limits of state power. But the discourse of neoliberalism concentrates on interests rather than rights or principles.

As such, the political framework changes from individual security to the question of “what’s in my interest?” That’s why the common articulation of “disinterest” takes on so much resonance: But if I’m not doing anything wrong, then why should I care?

The discourse of “interests” has begun to hegemonize the shape of public concerns. Because the language of interests is so commonplace, very few raise an eyebrow when the state appropriates the same language to explain its actions. For example, the U.S. military announced this past weekend that it will no longer communicate information about Guantánamo detainees who are on hunger strike.

Officials have determined that it is no longer in their interest to publicly disclose the information, said Navy Cmdr. John Filostrat, a spokesman for the military’s Joint Task Force Guantanamo.

Filostrat has reported that it is more important to worry about the welfare of Gitmo guards (sympathy for whom had to have been enhanced by "60 Minutes’" report inside Camp Delta, which consisted of prisoners yelling, and reports of feces being flung at the guards, among other atrocities), and that of the detainees rather than reporting these strikes.

As the Washington Post reports, of course, the stories on the detainees’ hunger strikes were themselves the barometer of the prison. Thus, the absence of information shuts down journalists' and human rights advocates', not to mention the public’s, access to this information. But the reason cited was that it was no longer in the interest of the government.

Since when does the interest of the government become an express – and justifiable – factor in which information is publicly reported? It is hard to imagine the state making this the basis of its defense in an earlier era. Arguably, this has been the overwhelming concern for the decade since Sept. 12, 2001, but government policies have always been articulated as having the “interests” of the public in mind: i.e., national security.

The convergence of the language (e.g., of interests) that marks corporate motives and state motives illuminates how the force of biopolitics (or ontopolitics, as I write elsewhere — namely the creation of moral monsters in contrast to good citizens) shifts from one group to another. This is not a question that Michel Foucault answers: How does the focus of biopolitics change from epoch to epoch? Why are some groups persecuted in one moment, but not the next, and how does the focus change? In this moment, as the case of surveillance suggests, it is because the state has taken up the language of interests, as the corporations did already, to manage/discipline their subjects. But the next chess move is that the corporations have taken up the debate of “freedom/security” in order to battle consumers'/subjects’ resistance to being managed or controlled, in order to ensure the corporations’ continued existence and profit-making capacity.