Detroit and Illinois aren't the only ones stealing earned benefits. The idea is to avoid tax hikes and service cuts 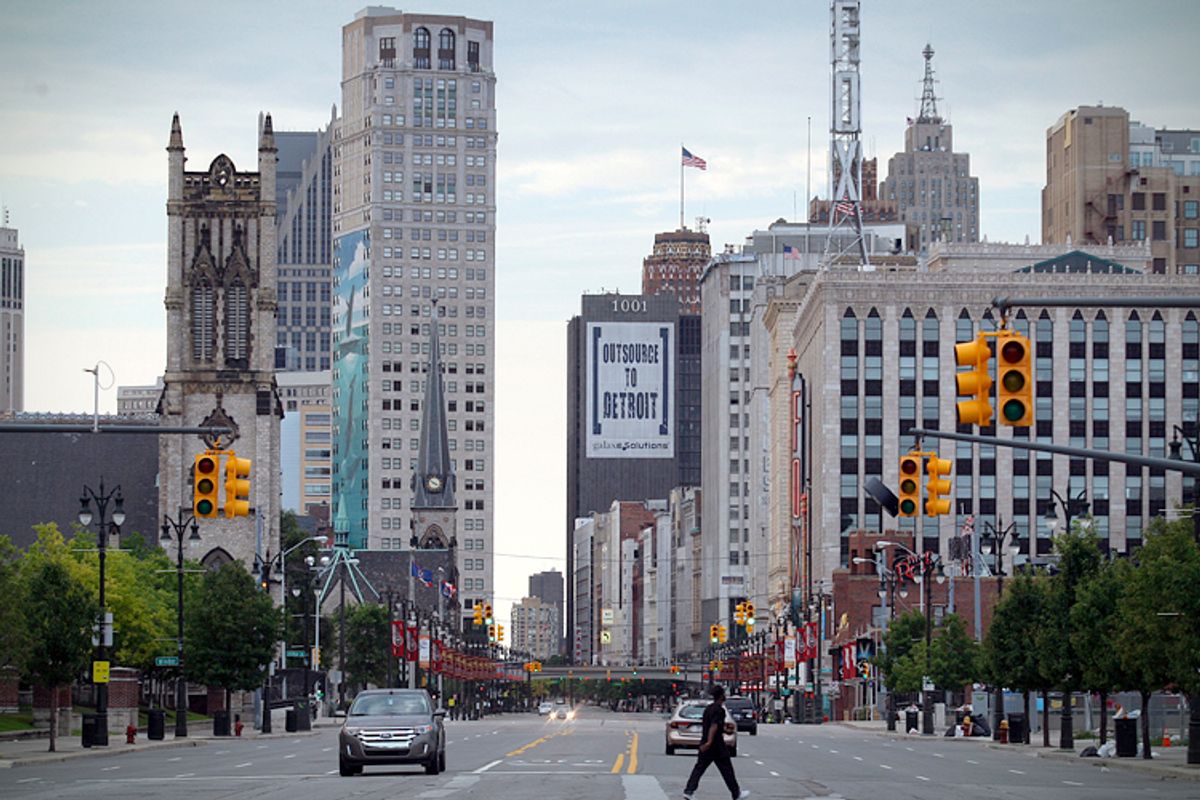 Across America, states, counties and cities are taking steps that will make retirement for ex-public employees much harsher. Courts, politicans and corporations are all working together to chip away at deferred wages: reducing pensions or eliminating promised healthcare, or both. Said simply, they’re looting retirements and pushing people toward poverty.

This is the course unfolding in federal bankruptcy court for the city of Detroit. It is what the Illinois Legislature passed last week in a giant pension reform bill that excluded the city of Chicago, whose red ink reckoning comes next year. It’s what’s before California cities that have filed for backruptcy, or are seeking voter approval to cut into retirement benefits, such as Stockton, San Bernadino, Riverside and even wealthy San Jose.

In these and other government jurisdictions, the foremost question is not why legions of elected officals have failed to provide for the employees who did their jobs and made the cities function. Instead, the question seems to be how much they can plunder earned and pledged benefits, so they can avoid raising taxes or cutting services.

“News leaking out this week from the Motor City tells how the enormous gap between pensions workers earned and the money set aside to pay for them will be closed,” wrote David Cay Johnston, a Pulitzer Prize-winning reporter. “By stealing from workers.”

The plundering of private sector pensions by corporate executives is nothing new.Books and columns by Johnston and other Pulitzer Prize winners have detailed how most S&P 500 companies have diverted mountains of cash from employee pensions to make their quarterly earnings look bigger, boost stock prices and fatten their annual bonuses—all unconscionable and corrupt acts that were perfectly legal, says Johnston, thanks to a Congress that rewrote the legal fine print at the behest of corporate lobbyists.

But the newest development in America’s unfolding retirement security crisis concerns public employees—people who worked in schools, public safety departments, etc. and often are exempt from Social Security because they have other public retirement plans. For years if not decades, top fiscal managers in a mix of cities, counties and states didn’t put away what’s now hundreds of billions of dollars for civil service workers. Now, the same class of public sector executives are taking steps to cut these retirement packages. The question is not whether the cuts are coming, but how will they unfold.

Take Detroit’s bankruptcy filing. Beyond the exceptionally nasty politics surrounding the largest municipal bankruptcy in America, what was pivotal last week was a ruling by the federal bankruptcy judge that classified the promised retirement benefits as “unsecured” debt. That’s a subordinate class to “secured” debt holders, such as investors who bought bonds, and it means that the Court can order reduction in retiree benefits. The fact that Michigan’s state Constitution forbids this kind of breach of contract did not apply, the bankruptcy judge said, because a federal proceeding trumps state law. Without getting lost in the legal details, the big question is how big a hit will Detroit’s retirees take. A pension in the city averages $19,000 a year.

“This decision sets a terrible precedent,” said Karen Friedman, executive vice president and policy director for the Pension Rights Center. “Allowing a city to cut its retirees’ pensions is a signal to other cities across the country that they don’t need to fund their pensions responsibly and that they can renege on these promises when they run into trouble… These are not big pensions.”

What’s up next for Detroit is that the city’s emergency financial manager—appointed by the state’s Republican governor—will come back to court with a schedule of proposed benefit cuts and other renegotiated contracts. That’s exactly the stage the California city of Stockton is at in its bankruptcy. Itproposes to maintain its pensions but end retiree health benefits, raise the city’s sales tax and pay some bondholders 50 cents per owed dollar. In another California city, San Bernardino, the process is further along, with the city already filing its plan to shortchange creditors and some of them—notably the California Public Employees Retirement System, or CalPERS—objecting in court.

Outside bankruptcy court, a slightly different dance is occuring. Last week, the state of Illinois passed a pension reform bill that cuts back pensions by reducing cost-of-living adjustments over three decades, compared to the previous inflation formula. Chicago, which has less than half of what’s needed for its pensions and almost $900 million in unfunded retiree healthcare on top of that, hopes to present its plan early next year.

In almost all of these cases, the priority was cutting benefits—either in pensions, health plans or both—as opposed to making up the shortfall elsewhere. There also is a parallel push to shut down access to pensions, which is a deferred salary, by offering the newest employees only the option of opening a retirement savings account, as well as paying a larger share of their salary for healthcare.

What is taking shape is a nationwide retirement security crisis. Experts like Johnston and Friedman are saying that for the first time in decades, tens of millions of elderly people will slide into poverty as they will be left with little more than Social Security to live on—which now averages $1,230 a month, and that’s before paying taxes on it, or Medicare fees.

The reason this is happening in the private sector, as Ellen Schultz noted in her book Retirement Heist, is that executives want to boost stock prices and cash out. In the public sector, it’s because government managers and legislators used retirement funds for all kinds of services instead of raising taxes. While powerful interests are working to steal other people’s money, average Americans are increasingly finding themselves on shaky ground.

“What I have seen in a lot of these cases is that people end up selling their homes,” Schultz told Forbes, when asked what happens to people whose pensions are cut. “Really the only safety blanket that you have is Social Security, which also is under assault. The same retirement industry that dismantled pensions would love to dismantle that program and have a crack at the assets.”