"The Hobbit: The Desolation of Smaug": Jackson leaves Tolkien behind 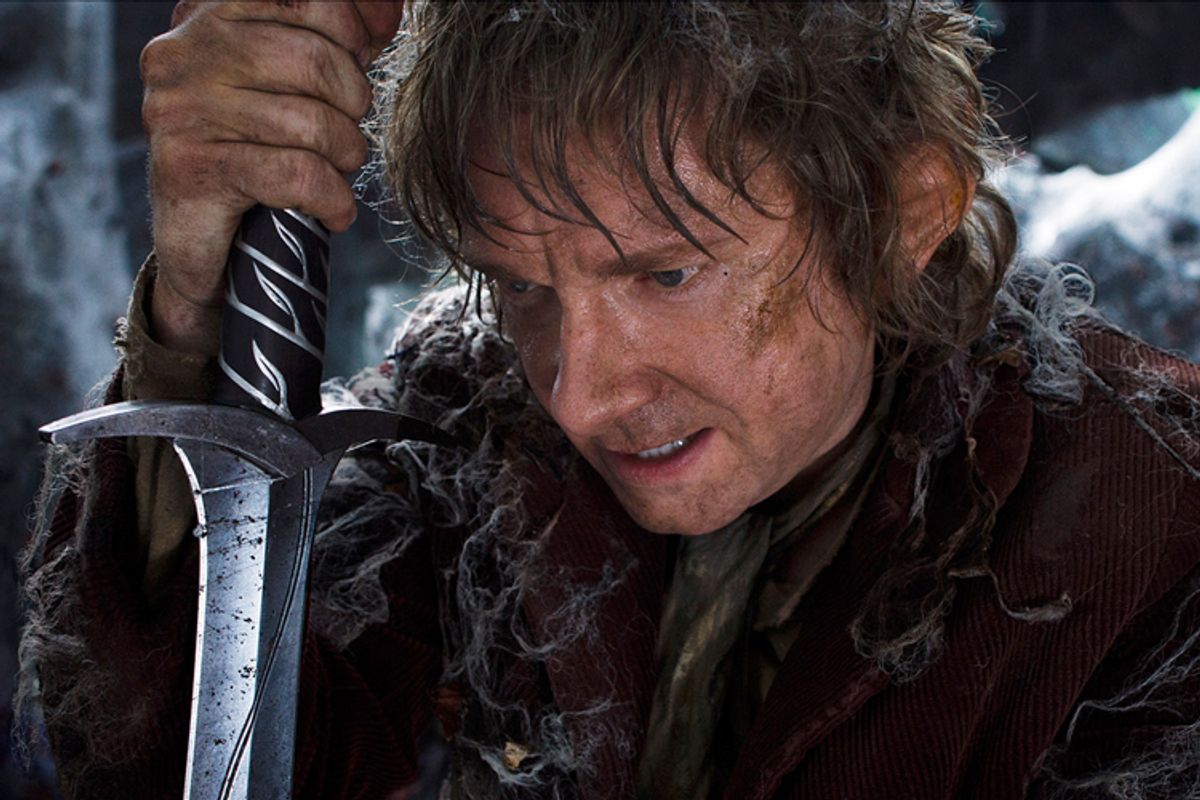 Well, that’s more like it! While I remain unconvinced about Peter Jackson’s vainglorious project to inflate an adaptation of J.R.R. Tolkien’s 1937 children’s story into a sprawling three-part prequel to “The Lord of the Rings,” at least with the middle chapter, “The Hobbit: The Desolation of Smaug,” you see what Jackson is aiming for. This is a rip-snorting, barrel-riding adventure movie — perfect for all ages, as they say (though it isn’t for very young kids) — loaded with fast-paced fight scenes, great-looking effects and enjoyable and/or scurrilous supporting characters. In terms of tone and pace, this movie feels more like the 1938 Errol Flynn “Adventures of Robin Hood” than like Tolkien, but that’s not such a bad model. It’s long past time to accept that Jackson has borrowed the plot and characters of “The Hobbit” for his own Lucas-scaled enterprise, which now looks a lot more promising than it did after the dull, muddled and overly picturesque opening episode.

Jackson and his collaborators (his credited co-writers are Fran Walsh, Philippa Boyens and the semi-banished Guillermo del Toro) can plausibly claim that they’ve based most of “The Desolation of Smaug” on Tolkien’s work, but not necessarily or exclusively on Tolkien’s original text of “The Hobbit.” They have exhaustively plundered every footnote or appendix or parenthetical reference in Tolkien’s “Lord of the Rings” that might shed some backward light on the events of “The Hobbit,” leading to the interpolation or invention of all sorts of controversial characters and incidents not found in the book. In the first film of the trilogy, for instance, we met the lamentable wizard Radagast the Brown (Sylvester McCoy), known on the Internet as “Radagast the Birdcage Liner,” with his poop-encrusted hairdo and his bunny-powered sled. (Although Radagast is mentioned in the “Hobbit” and “LOTR” books, he never appears in person.) He’s back in “Desolation of Smaug,” to less offensive effect; while he still feels more like a goofball J.K. Rowling character than a Tolkien character, I guess that’s exactly the idea.

Elrond (Hugo Weaving) and Saruman (Christopher Lee) do not reappear in “Desolation of Smaug,” and Ian McKellen’s Gandalf remains largely in the background, though all should be back for the concluding chapter. (We see Cate Blanchett’s Galadriel for, like, two seconds.) But Elvish warrior Legolas (Orlando Bloom), one of the most beloved of all “LOTR” characters, plays a major swashbuckling role here in helping hobbit-burglar Bilbo Baggins (Martin Freeman) and his band of vengeful dwarves get past bands of marauding Orcs and reach the dragon-guarded Lonely Mountain. Now, this is complicated for the fan base: Legolas never appears in Tolkien’s “The Hobbit” (no doubt because the author hadn't invented him yet) but even hardened Tolkien geeks will concede that there’s a certain logic in writing him into the story. Elves live for thousands of years, after all — and Legolas’ father Thranduil, arrogant lord of the Woodland Elves (played here by Lee Pace), is an important figure in the original “Hobbit” story.

But wait, that’s not all! There’s also the ass-kicking, name-taking Elvish girl-power warrior Tauriel (Evangeline Lilly), the Lara Croft or Katniss Everdeen of Mirkwood, and her tempestuous love triangle involving Legolas and Kili (Aidan Turner), who is the tallest, least bearded and undeniably smokin’-est of Bilbo’s dwarf companions. Nope, I’m not kidding even a little bit, and I say without fear of contradiction that all of that is 110 percent made up, that J.R.R. Tolkien would be outraged beyond belief and that even now his son and heir Christopher Tolkien is crafting dire rune-spells in the Black Speech and ruing the day he ever took money from these infernal servants of Morgoth. But you know what? I’m kind of OK with it. I mean, introducing a love affair between a rebel Elf chick and a hot dwarf dude is so far beyond anything Tolkien would ever have countenanced that it amounts to a declaration of independence. This trilogy has become its own thing, which is more like a freewheeling riff on Tolkien’s “Hobbit” than an adaptation, and while there’s a whole lot about it I would have done differently, it’s good fun on its own terms. So there.

There were so many things that dampened my enjoyment of “An Unexpected Journey,” Jackson’s opening chapter, that it’s hard to know where to start. (Astutely, Warner Bros. has generally shown critics this new movie in 3-D projected at a “normal” frame rate, although many theaters will show the ultra-hi-def 48 fps version, with its migraine-inducing clarity.) Chief among them was the overriding sense that noble dwarf prince Thorin Oakenshield (Richard Armitage) and his quest to recapture the mountain kingdom of Erebor from the terrible dragon Smaug — the entire story of Tolkien’s “Hobbit,” in other words — had become a giant MacGuffin for Jackson. That movie seemed more interested in laboriously setting up the chessboard for the War of the Rings, far in the future: Gandalf and Galadriel and Elrond and Gollum and the Ring and that super-unsatisfactory apparition called the Necromancer, way up in the tacky-looking abandoned Scottish-style castle of Dol Guldur. (I’ve said this before and no doubt I’ll say it again: Throughout his Tolkien adaptations Jackson has stuck to the interpretation that Sauron, the big bad enemy-dude, takes no physical form. He’s wrong. I can understand the reluctance to have Sauron appear directly — Tolkien never does — but presenting him as a rotating eyeball or smoke-bomb fumes or the result of a "Star Trek" transporter failure is a poor choice in dramatic terms and one that directly contradicts several references in Tolkien’s writing. Please discuss.)

This time around, the action feels much more vivid and present-tense; we get a mysterious side trip with Gandalf and Radagast to a creepy crypt whose nine occupants have apparently broken out (Tolkien buffs will get it right away, of course), but the table-setting and exposition are otherwise minimal. When not occupied with romancing Elvish hotties, plucky Bilbo, stout Thorin and their companions are battling distressingly realistic giant spiders and bands of murderous Orcs — led by the terrifying Azog the Defiler, a genuine Tolkien baddie (though not one found in “The Hobbit”) — escaping from Thranduil’s kingdom in an exhilarating barrel-ride chase sequence, and getting smuggled into the human city of Laketown by the conflicted boatman Bard (Luke Evans), later to play a crucial role in the struggle against Smaug. While most of the non-Thorin dwarves remain an undifferentiated mass of British Isles whimsy, the glorious picture-book settings are crowded with terrific supporting characters, from Bard and his nemesis, the deliciously corrupt Master of Laketown (Stephen Fry), to the vain and queeny Thranduil to Beorn (Mikael Persbrandt), the shape-shifting bear-man who seems to have wandered in from Anglo-Saxon legend (Tolkien’s academic specialty).

Martin Freeman didn’t make a huge impression on me as Bilbo in the first movie, with all its leaden domestic comedy, but in this chapter he grows in gravity, partly because he keeps putting on that damn Ring to evade spiders and Orcs and Elves and suchlike, and it seems to have stranger and stranger effects each time. In the final third of this movie Bilbo makes it inside the lost Dwarvish underground kingdom of Erebor and comes face to face with Smaug the Magnificent and Tyrannical — Smaug with an "ow" as in “yowza,” not an "og" as in “smog” — greatest of the ancient world’s treasure-hoarding worms. As voiced by Benedict Cumberbatch (who else?), the dragon is an imposing presence and one hell of a special effect, and Jackson leaves him and Bilbo and us hanging on a narrative cliff, breathlessly waiting for the final showdown.

There is no question that much of the magic and mystery and simplicity that made Tolkien’s work so striking in the first place has been sacrificed here to the demands of an excellent but essentially familiar CGI action-adventure flick, closer in manner and spirit to “The Avengers” than to Tolkien’s transmogrified fairy tale. I feel some sadness about that, absolutely, but one may as well complain that kids don’t listen to opera anymore, or read Vergil in the original. A handful of weirdos still do those things, and always will — and Jackson has now departed so far from Tolkien’s “Hobbit” that the original work is still there, essentially untouched, for those weirdos who want it. In exchange we get a movie fueled by bunny-power, sparrow poop and Elfland’s original riot-grrl. Take it or leave it.